As the chaos in Baltimore has shown, it's far too soon to shift our attention to the grievances of cops 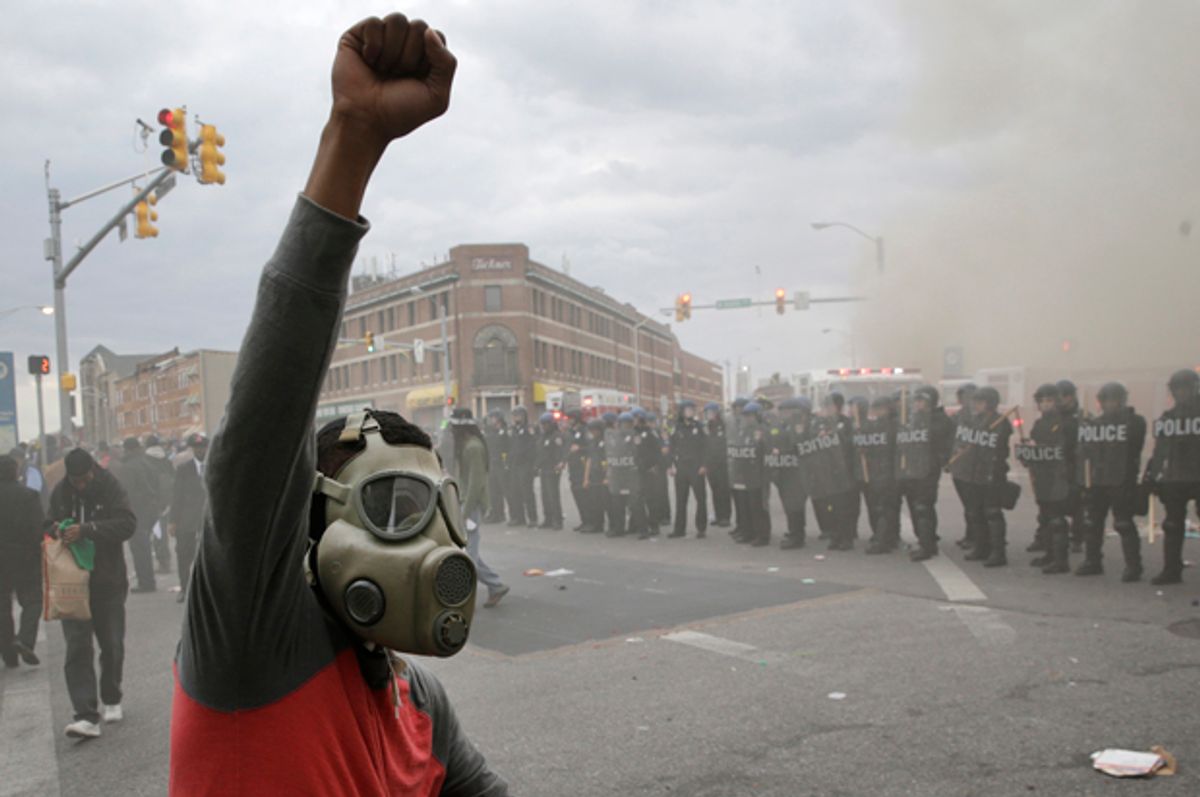 Out of the many invisible and all-powerful forces that govern our universe, the cruelest must be Time. Whether you’re asking it to slow down for selfish reasons or to speed up for someone else, it doesn’t make a difference. Time is relentless and uncaring; it does not listen and it will not stop.

But even though it is ultimately an egalitarian ruler, wreaking havoc on the old, young, good and bad alike, Time seems to hold a special grudge against Loretta Lynch, the woman who, after an unprecedented delay, was finally sworn in on Monday as the 83rd attorney general in the history of the United States.

The first indication that Time has it in for Lynch was also the most obvious: the Senate’s 167-day-long dawdle. But while it was obviously wrong to make the first African-American woman ever nominated for the post wait so absurdly long to be confirmed (only two of Lynch's 82 predecessors waited longer), I’m hesitant to throw the fault entirely on Time’s shoulders. The attack was launched by Republicans, after all; Time was merely their weapon.

But the second piece of evidence that Time may be holding a particular grudge against the attorney general was more palpable: the riots that convulsed Baltimore this weekend and paralyzed the city on Monday. Because although Lynch obviously had nothing to do with the disorder, the riots' fires show with blinding clarity that Lynch’s first goal — which is “improving police morale,” according to the Times — is entirely premature. The wanton destruction of property cannot be legitimated; but simply criticizing anarchy and praising law enforcement won't bring the mayhem to an end. And it won't provide justice.

In many ways, the chaos in Baltimore is just the latest iteration of one of America’s saddest and longest-running stories. It is another example of what Martin Luther King once called “the language of the unheard.” King was speaking then of the riots that traumatized much of the country during the summer of 1966. But the social ills he described as kindling for the riot’s fire — poverty, police brutality and malign neglect — are, despite the nearly 49 years that followed, still powerful forces in America today.

For this particular moment, though, it’s Baltimore Police Department's documented history of lawless violence that's been identified as the riots' inspiration. Protestors and rioters — who, it’s worth noting, are usually not the same — cite as their catalyst the death of Freddie Gray, a 25-year-old African-American man and Baltimorean. On April 12, Gray was arrested by officers from the BPD. When police detained Gray and put him in a van for transportation, he was walking; by the time the trip was over, he had a broken neck. He died on April 19th.

No one yet knows for sure exactly what happened to Gray during that trip and in that van. There are reports that he was taken out at one point and beaten, but an autopsy showed no injuries except for those to his spinal cord and neck. The BPD has already admitted that its officers did not provide Gray with the necessary medical care. But the main question — Why was he able to run from the police in the morning, but struggling to breathe by nightfall? — has gone unanswered, though an increasing number suspect the widespread, grotesque practice of giving “a rough ride” is to blame.

I’m quite certain that, at least to some extent, Attorney General Lynch would agree. But that’s why it’s so unfortunate that news of her interest in “finding common ground between law enforcement and minority communities” came when it did. Because once the last stone is thrown, the fires are put out, and the state of emergency in Maryland is lifted, what Baltimore and the countless places in the U.S. like it will need is not another conversation. And finding “common ground” won’t be what America needs from its attorney general or its Department of Justice.

What will be needed instead is for the authorities in Baltimore, Maryland and D.C. to stop pandering to the police unions who demand carte blanche in the field and an endless line of officials singing about their valor. What will be needed instead are signs that the authorities take fears of the rise of the “warrior cop” and police militarization seriously, and that they will no longer see the deaths of people like Gray as "tragic." Because they're not cosmic acts of injustice; they're crimes. To suspend (with pay) the officers who may be responsible is not enough — and Lynch needs to make clear that she understands that, and that her predecessor's groundbreaking report on Ferguson, Missouri, was no aberration.

What will be needed, in short, is for the people most apt to use “the language of the unheard” to feel that someone who matters is finally listening. And that those in public office prove with actions that they believe it when they say an African-American life is worth no less than a cop's. Now is not the time for Lynch to focus on making law enforcement happy. Now is the time for her to promote equal justice. Improving police morale can wait.