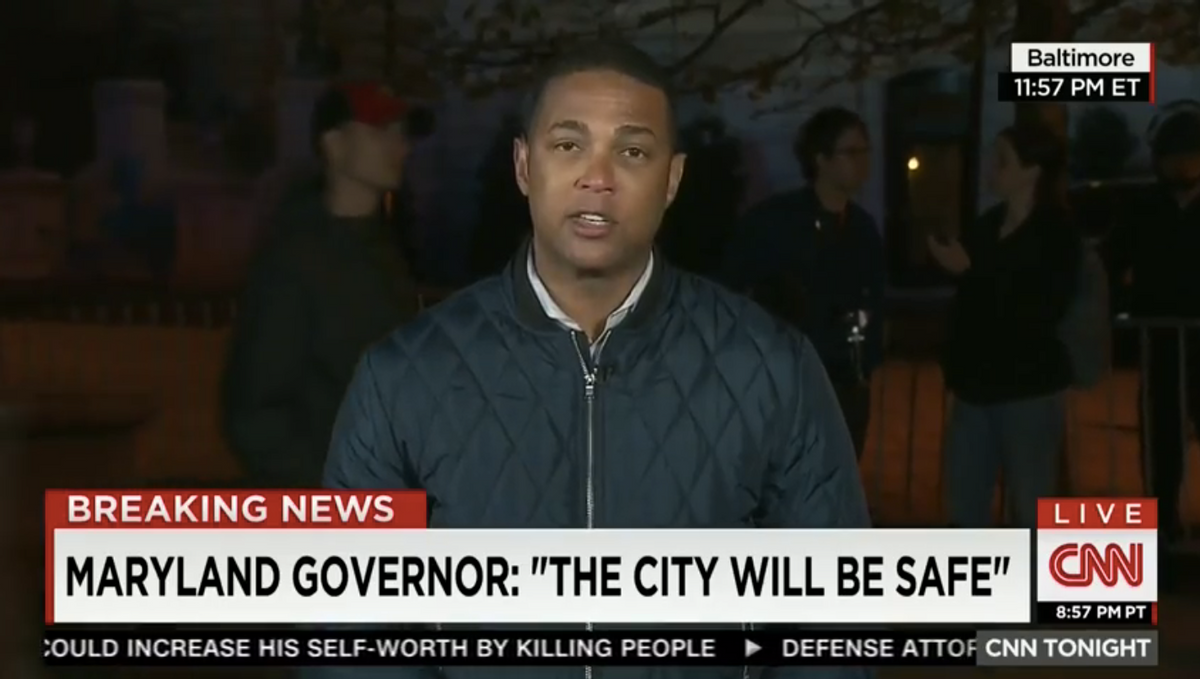 Late on Monday evening, CNN's Don Lemon, who had traveled to Baltimore to cover the ongoing unrest there, found himself speaking to the city's mayor, Stephanie Rawlings-Blake, and to Maryland governor Larry Hogan.

Lemon—who, despite his current near-parodic status, was relatively restrained here—quizzed the two politicians for nearly 11 minutes, until they all but ran away from him. The confrontational stance may have been welcome, but the questions themselves left much to be desired. The only thing Lemon wanted to know was why, in his words, protesters had been given "too much leeway," and why police had not been allowed to use "more restraints" against them sooner.

Imagine instead if Lemon had taken a moment to ask Rawlings-Blake to account for the fact that the city she runs has paid out millions of dollars in settlements to (mostly black) victims of police brutality. Or grilled her on just why she thought Freddie Gray had wound up with his spine almost completely severed while in police custody. Or why Gray's so-called "rough ride" fits so neatly into a long-running pattern of police misconduct.  Or what Rawlings-Blake and Hogan planned to do to curb an apparently out-of-control police force. Or even why the two most powerful public officials in Maryland thought that their biggest city was in such a deeply combustible state, and why a large swath of Baltimore's citizens so clearly regarded the police as an enemy.

Instead, Lemon assumed the role of a tough-on-crime politician: The only question that mattered was why these people couldn't be brought to heel. Anything else—anything that might truly have illuminated the situation we are witnessing in Baltimore—was left off the table.

None of this is surprising. Our news culture is usually completely out of its depth at times like these. It turns into a short-sighted, authoritarian force that resolutely ignores history and context and zeroes in on the destruction of property instead of on people. Moreover, a media that routinely sensationalizes and distorts the levels of black criminality in America can hardly be expected to change its ways when violence flares up.

It's hard to know where to look for decent coverage of what's going on. Turn on the TV and you'll find Wolf Blitzer so unequipped to handle the story that he might as well hold up a sign reading "PLEASE HELP ME." You'll also find Joe Scarborough saying that he knows plenty about Baltimore because he passes through it on the train sometimes.

Go to Twitter  -- an activity that even in the best of times can fill you with a mounting combination of anxiety and rage -- and the situation is only marginally better. What makes Twitter so vital—the sheer volume of voices and information—is what can also turn it into a festering garbage dump. It's been hard to avoid the inevitable "What would Martin Luther King say" conversation, or the far worse on that demands: "Please listen to the creator of this fictional television show instead of literally anyone else."

What is so especially frustrating is that the questions that really need to be explored are not even that hard to find -- nor are the answers to those questions. The simplest one is: Why would people in Baltimore erupt in the way that they have? (Answer: Maybe it has something to do with the overwhelming levels of poverty they face, or the aforementioned police violence that still runs rampant.)

That our elite media so consistently fails to probe this basic question is a measure of its blinkered priorities. When police commit violence against ordinary citizens, so many in the corridors of power caution against instant condemnation. We're reminded that we need to wait until all the facts are in. We unpack each second of the interaction in the minute detail, searching for a logical reason why the cop pulled the trigger. Yet when the same media looks at people who have erupted in fury against this kind of state-sanctioned violence, those same calls for understanding tend to evaporate, and we are left with a kind of unthinking condemnation. There is no reason why protesters and even looters do not deserve to be heard and understood with the same solicitousness as the police who all too frequently kill their family and friends.

Nobody is saying that the scenes we have witnessed in Baltimore are a good thing. But if we fail to approach them with the empathy, context and inquisitiveness they deserve, we will never be able to fully capture what is going on, and we will find ourselves playing out this sorry situation over and over again.