Even if the Supreme Court rules for gay marriage, Cruz proves that much still needs to be done for LGBT rights 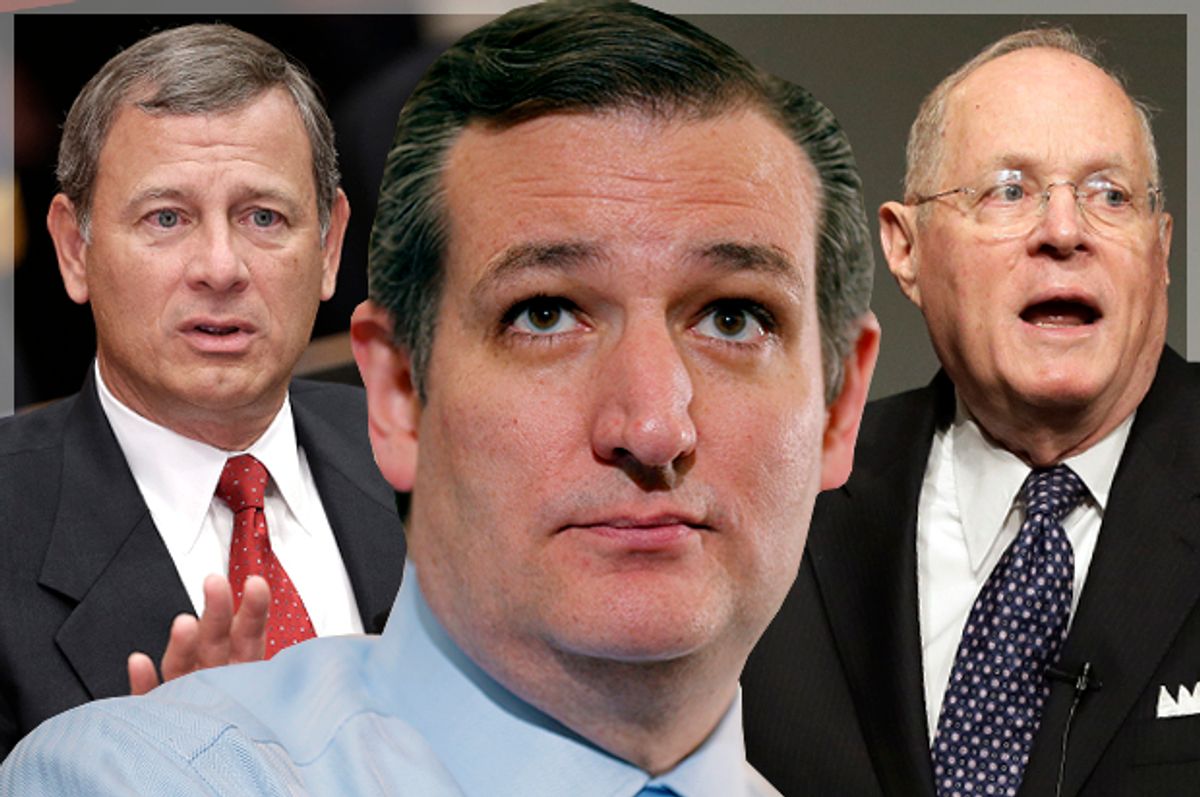 Today's oral arguments in the Supreme Court marriage equality case may or may not be exciting, but the importance of the outcome cannot be overstated. We are witnessing before us one of the greatest expansions of civil rights in decades, and if the high court decides to be part of the future instead of the past, this advance will codify into law the basic human right of marriage for gays and lesbians throughout America. This country has come a long way very quickly and it's inspiring to see it happen.

There is no guarantee, of course. There is still a cultural divide on the issue, as we saw in the recent "religious liberty" controversy in Indiana. Like the nation at large, the Court is divided too. It's assumed that the four more liberal judges will vote in favor. If any of the the uber-conservative triumvirate of Scalia, Alito and Thomas were to vote with them, it would be a judicial curveball of historic proportions. (Translation: Don't count on it.) This leaves Chief Justice John Roberts who has shown some propensity for consensus building, and could vote with the liberals; as well as, of course, Anthony Kennedy, the justice known mostly for majority-straddling (and right-leaning) position on the bench.

As Ian Millhiser wrote at Think Progress, Kennedy's record on gay rights cases is something else:

Nearly every gay rights victory handed down by the Supreme Court has Justice Anthony Kennedy’s name on it. Kennedy authored the very first Supreme Court decision recognizing that anti-gay laws can violate the Constitution’s promise of equality, and he followed that up with decisions targeting sex bans and ending marriage discrimination by the federal government. In the likely event that the Court declares marriage discrimination unconstitutional throughout the nation this June, expect to find Justice Kennedy’s name on that decision as well.

The fact that the same justice repeatedly writes in the same issue area can be a sign that they find that area particularly interesting, but it is also true that closely divided cases are frequently assigned to the most on-the-fence member of the Court — on the theory that no one can tailor an opinion to their own idiosyncratic views better than themselves. Kennedy’s record supports the latter interpretation, as he’s fretted in the past about the “uncharted waters” facing the Court if it hands down a decision bringing marriage equality to the entire nation. Since then, however, the Court has allowed lower court decisions supporting marriage equality to take effect — a strong sign that Kennedy has made up his mind in favor of equality.

Nevertheless, Kennedy remains the justice to watch for the best sign of how the Court will shape its opinion.

As Millhiser points out, however, the real question will be if a positive decision also establishes that gays are among those who have historically suffered from discrimination and are entitled to heightened protection against discrimination under the Constitution, something Kennedy has been reluctant to do up until now. There is speculation that he may have been waiting for the country to be ready for that, but, in truth, nobody really knows. His thinking is opaque at the best of times. But this issue is important beyond the issue of marriage. Millhiser explains:

[T]he question of whether all such discrimination will be treated skeptically by courts in the future has profound importance for the next generation of gay rights cases. Earlier this year, for example, Kansas Gov. Sam Brownback (R) rescinded an order forbidding the state from firing employees due to their sexual orientation or gender identity. If all government-sponsored anti-gay discrimination is subject to heightened scrutiny, gay, lesbian and bisexual state workers in Kansas will still enjoy significant legal protections. If the Court’s holding on marriage equality does not extend such scrutiny to anti-gay discrimination, by contrast, the fate of gay rights outside of the marriage context is far more uncertain.

It's hard to imagine a country in which it's legal for gay people to marry but it's also legal to discriminate against gay workers, but it's possible. In the past, as miscegenation laws were struck down, in some states it was still legal to discriminate on the basis of race against one member of a bi-racial couple. In the same way, all you have to do it look at the "religious liberty" exemptions cropping up to see how the fight for gay rights will not be settled by a positive ruling in Obergefell v. Hodges, the case being heard tomorrow. There is still work to be done. Fortunately, the gay rights movement is one of the most effective civil rights movements in history, so there's good reason to be optimistic.

The other day I wrote about the inanity of gay real-estate moguls hosting a fundraiser for far-right, anti-gay zealot Ted Cruz in their home. Last week, one of the hosts, Ian Reisner, made the comment that gay marriage “is done — it’s just going to happen,” with the implication that there was no further need to support for politicians with whom he agreed on "social issues," since the battle had been won.

The gay community was not amused. According to Mediaite:

Within hours, a Facebook page calling for the boycott of the Fire Island Pines Establishments and the Out NYC Hotel, all owned by Reisner and Weiderpass, gained more than 2,500 followers, its wall filled with angry messages blasting the two for selling out their ideals.

“Weiderpass, an out gay man, held a ‘reception’ this past weekend for Senator Cruz,” said the first post on the page. “The question, among so many others, is, WHY???!!!”

“It was arranged to help Cruz get major donors to his campaign,” wrote another. “Claiming it was anything else is pure bullshit. Pure. Bullshit.”

Reisner defended their actions, pointing out that he'd also hosted a Ready for Hillary event and saying, “Senator Ted Cruz and I disagree strongly on the issue of gay marriage, but having an open dialogue with those who have differing political opinions is a part of what this country was founded on.” His co-host Mati Weiderpass wrote a similar plea on Facebook, although he later made the post private.

One imagines that few of his Facebook friends bought the idea that Ted Cruz was there seeking to understand gay people better. And Reisner posted this poignant message a couple of days later:

I am shaken to my bones by the e-mails, texts, postings and phone calls of the past few days. I made a terrible mistake. I was ignorant, naive and much too quick in accepting a request to co-host a dinner with Cruz at my home without taking the time to completely understand all of his positions on gay rights. I've spent the past 24 hours reviewing videos of Cruz' statements on gay marriage and I am shocked and angry. I sincerely apologize for hurting the gay community and so many of our friends, family, allies, customers and employees. I will try my best to make up for my poor judgement. Again, I am deeply sorry.

Proving what an ungrateful jerk he is, Cruz's spokesman told The Washington Examiner, "I would say, knowing what we know now about the setting, I think we would have chosen a different venue."

Despite the blithe tone in that comment, it's fair to assume that Ted Cruz got an earful from his supporters as well. After all, the Republican activists who back right wing candidates like Cruz were likely just as unhappy about this meeting as the gay billionaires' friends and customers. This clash between what liberals see as human rights and conservatives see as religious liberty is not going away.  Even if right wing icons like Senator Ted Cruz and Justice Anthony Kennedy decide that marriage equality is unavoidable there are many fervent social conservatives who will carry on the crusade. They are nothing if not sincerely committed to their beliefs.

It is to be fervently hoped that the Supreme Court affirms the right of gay people to marry. It will be a happy day indeed. But it's a mistake to be complacent about such things. As Millhiser said in his piece, there are many issues of discrimination against LGBT people still at stake.  And even when the Supreme Court hands down a momentous decision acknowledging a basic human right, there's no guarantee that it won't continue to be litigated by the social conservatives for a long time to come. Just ask reproductive rights activists.