Schumer is a fresh comedic voice, but the pressure to be the face of feminism is a trap for women in comedy 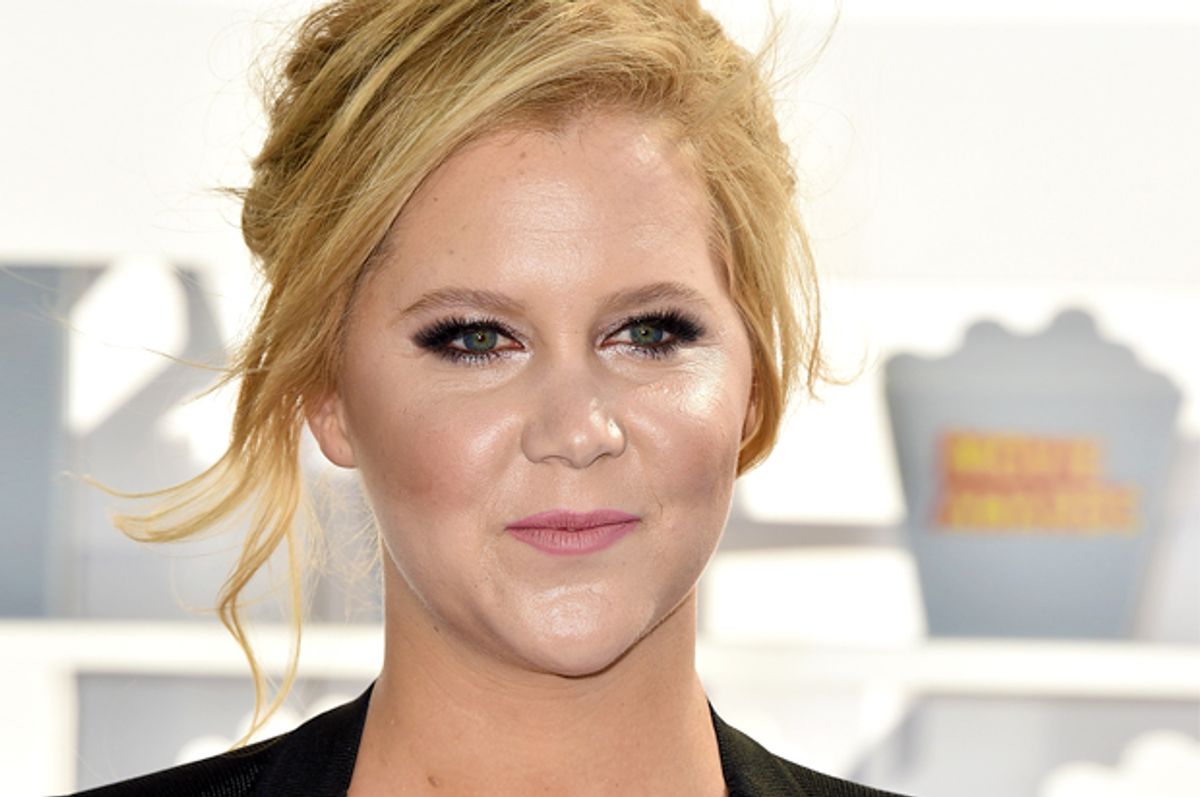 Do you know how much makeup it takes to look like you're not wearing any makeup? In a series of videos released earlier this year, feminist artist Molly Soda went long on the fluidity of natural beauty and the economics of so-called no-makeup makeup to show the time and cost involved in looking "effortless." It was a thoughtful exploration of the labor of self-presentation that didn’t set out to tell women how to feel about makeup -- or themselves.

I thought about Soda’s project after watching what was probably the strongest sketch of Tuesday night’s “Inside Amy Schumer,” a musical number sending up One Direction’s “What Makes You Beautiful” and its kindred spirit, the consumer campaign that “empowers” women by telling them what to do with, and how to feel about, their faces and bodies.

Well-coiffed boys swarm Schumer and croon that she should wash her face and let her inner beauty shine through. (“Girl you don’t need makeup, you’re perfect when you wake up! Just walk around like that all day!”) She complies because really what else can you do when you are outnumbered four to one by strange singing men. Schumer takes it off as instructed, but the boy band swiftly changes its mind after she shows her bare face.

One of the guys breaks it down for her: “It’s like I tore up the shag carpeting assuming there were hardwood floors underneath, but it turns out it was just dirty linoleum. These are just metaphors, girl, but they are about your face.”

The struggle is real, man. And the sketch nailed it. The parody video is just the latest addition to Schumer's comedic work exploring anxieties and acceptance around bodies, beauty and gender. (A speech she gave last year at the Ms. Foundation for Women’s gala is just as funny and movingly on point.)

But the other big sketch of the night, a riff on the Cool Girl that takes a clumsy turn through the Disposable Sex Worker trope and then pivots to become a straight PSA about the wage gap, doesn't quite land in the same way.

It opens with Schumer in a bland office with three male co-workers, looking to get in on whatever the guys are planning for the night. They talk about going to a strip club, then suggest Schumer wouldn't want to join. But she insists she is down. More down than they are, even! Once there, she buys everyone shots, appraises the body of one of the women working in a tone that is both condescendingly othering and cringingly insecure and then pays the group’s way into the champagne room.

While Schumer rests her head on one stripper’s lap and talks about horses, one of her male coworkers kills (or thinks he kills) a another woman. Schumer rallies the men, insisting that disposing of the body is a better idea than calling the cops. Then she tells the guys to go home, that she will do “100 percent of the work” -- even though she only makes 78 cents on the dollar. And just like that, Schumer turns to the camera and the sketch becomes a PSA directing the viewer to the Institute for Women's Policy Research and data about the pay gap.

It's darkly absurd, and there is some smart commentary in all of it about the pressure many women feel when they are the chosen woman in a space that is otherwise all dudes. (Or so I’ve heard, you know, from a friend who is definitely not me!) You are special and sacred, but you are also on notice. Object to something going on around you -- show that you can’t hang, can’t take a joke, can’t be cool -- and you don’t just compromise your own standing, you confirm every man’s suspicions that this is why we don’t invite girls. The No. 1 rule of the Cool Girl is to not kill the buzz.

But the Disposable Sex Worker trope is lazy, and while Schumer has shown herself to be incredibly skilled at turning lazy on its head in order to mock it, the sketch doesn't manage the task. It also ends on a bizarrely dehumanizing note when, after the woman wakes up, Schumer whacks her again with the shovel. The joke's ambition seems to be about men's expectation that women will conform so that they don’t get in the way, but too much of it seems to be: Ha, sex workers!

The strippers in the sketch are entirely unimpressed by Schumer's bro-tastic antics, which gives it some needed self-awareness, but it still feels one-dimensional. And while making the sketch about the men worked so well in last week’s brilliant “Football Town Nights,” this one isn't very interested in the guys. The strip club also seems to stand in as short hand for "a space that is bad for women" without much thought about it. Why not set the sketch on a ski trip with Silicon Valley dudes? A steak dinner when the men "leave the wives at home"? The White House? Or pick the White Guys Doing It For Themselves backdrop of choice, since there are plenty of options out there.

Schumer is getting a lot of well-deserved love right now for doing provocative, feminist work, but she is also one woman (with a sharp team of women writers) with one show that is trying to do some things that we don’t get to see a lot of in comedy. With the accolades comes a tremendous amount of pressure to get it right, as if a stream of flawless episodes could somehow even the score for every time some dude with a spotlight has gotten it wrong.

The thread running through each of the sketches last night was about the kind of demands we put on women to be beautiful, to be accommodating, to be perfect -- to meet our expectations. A version of that swirls in some of the praise of Schumer's work, even if it isn't intentional. The jokes need to land to match the idea that Schumer is the answer to comedy's bro problem. She is a comedian who has been open about wanting to do feminist work -- even to "educate" and explore complicated themes without losing sight of the joke. That's a powerful thing, but I don't envy the kind of pressure that seems to come with it. In its own way, the Feminist Savior is just another version of the Cool Girl trap.