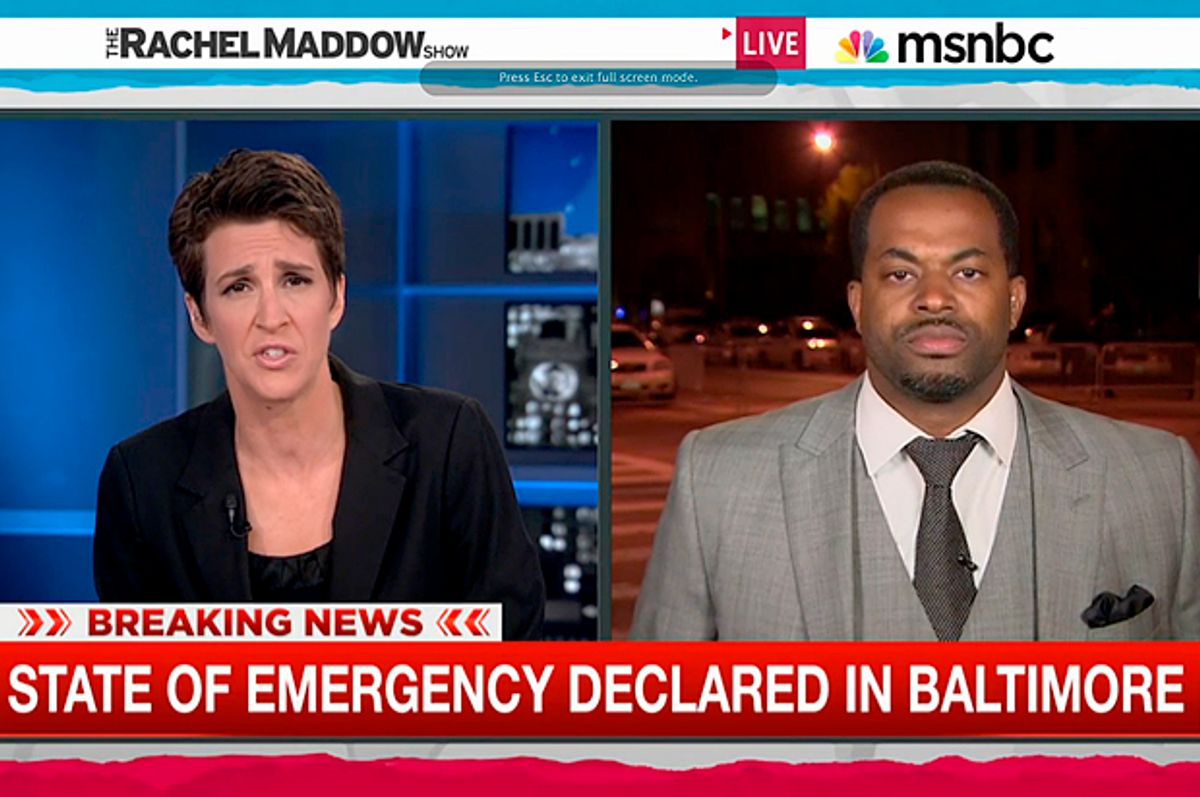 Rachel Maddow spoke to Baltimore City Councilman Nick Mosby last night about Mayor Stephanie Rawlings-Blake's statement that those responsible for the lawlessness in the city the past two nights don't actually belong to the community, but are "taking advantage" of the situation.

Councilman Mosby said that he doesn't approve of or condone the actions of these individuals, "but a lot of these young folks feel completely disenfranchised, completely disconnected, and 95 percent of the protests have been positive and productive."

"But unfortunately, we have seen some violent acts," he added. He explained, however, that "it's really the children crying out from abject poverty, from areas that haven't gotten the type of representation" they deserve as citizens. "They basically feel hopeless," he explained, so they joined the movement after Ferguson.

Councilman Mosby said that the only way to stop the violence is to reach these disaffected young people and convince them they "can be whatever they want to be in life. But unfortunately, we know that's not always true depending on the area code and zip code that you come from."

He noted that he was not claiming that "folks can't overcome things," or that they are wholly a product of their environment, only that because of the failures of the public education system in Baltimore, "their communication is in violence."

According to the recent "WAVE" study, children and adolescents in Baltimore have more in common with their peers in Johannesburg, South Africa than with young people living in other American cities. Dr. Kristen Mmari, an assistant professor at Johns Hopkins Department of Population, Family and Reproductive Health, told Elizabeth Kulze that "[w]hen you look at how they perceive their environments, kids in both Baltimore and Johannesburg are fearful. They don’t feel safe from violence." Children in other cities, however, respond to questions about what they fear with a much different set of concerns, for example, "I'm afraid of crossing a busy street."

Watch the entire segment via "The Rachel Maddow Show" below.