Charlie Hebdo and the PEN Award: Petition sent to authors urging them to "disassociate ourselves" from honoring the magazine

More than 30 writers, including Junot Diaz and Rick Moody, signed an email denouncing the award - UPDATED 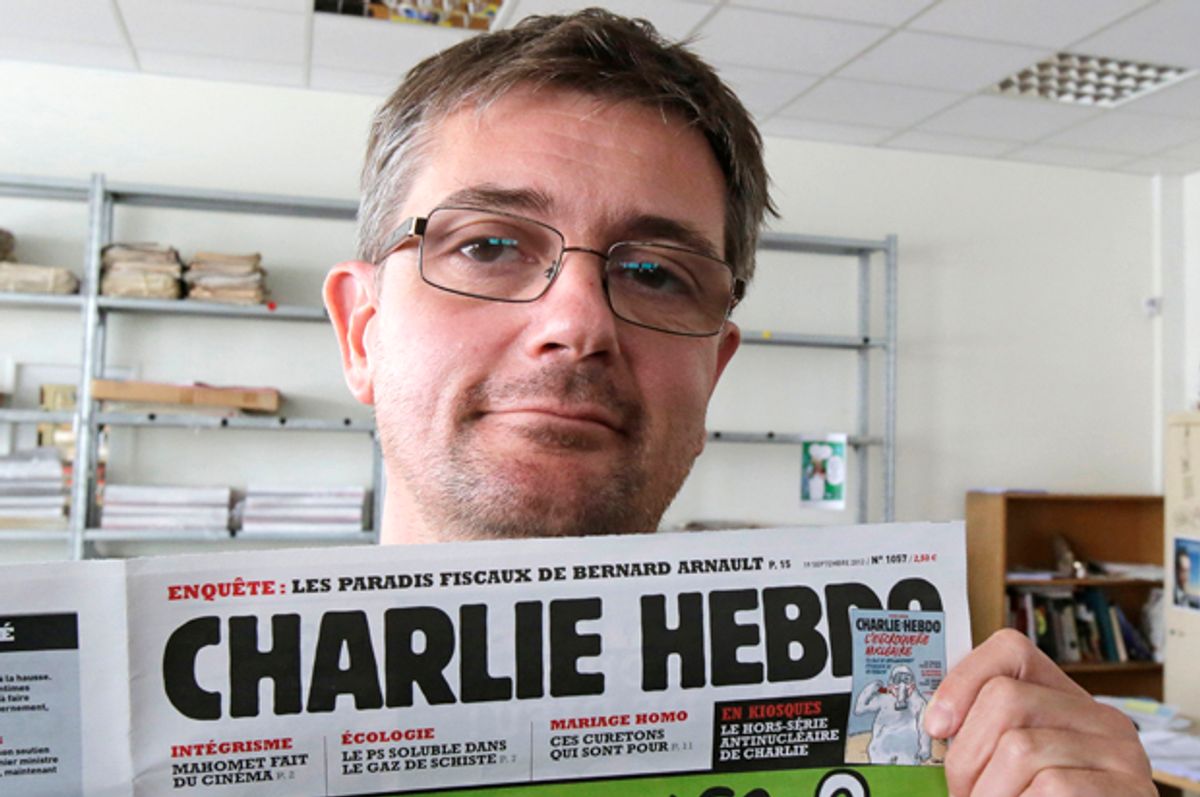 Charb, publishing director of "Charlie Hebdo," photographed in Paris, Sept. 19, 2012. Charb was killed on January 7, 2015 when a pair of gunmen stormed the newspaper's offices. (AP/Michel Euler)
--

Days after six literary "table hosts" made public their decision to boycott the upcoming PEN American Center gala, which will honor, among others, French satire magazine Charlie Hebdo with the Freedom of Expression Courage award for continuing to publish after the January 7 massacre that claimed the lives of 12 people, including eight journalists, an anonymous email has circulated to PEN members asking them to sign in support of disassociating themselves from the award. Controversy around the award has grown since Sunday, with author Salman Rushdie speaking out vehemently in favor of honoring the Hebdo staff, and others pushing back against the magazine's perceived Islamaphobia.  Authors who appear to have signed the letter denouncing the award include Pulitzer Prize winners Junot Diaz and Charles Simic.

It's not clear to some recipients who sent the email:

Or how and why:

Joyce Carol Oates' name is on the list of signatories, despite this tweet from the author yesterday:

I reached out to author Teju Cole, who is one of the six original boycotters, to ask him if he knew the letter's origins or organizers, and if he added his own name. Cole says: "I signed it, as have very many others. No further comment."

UPDATE: The letter reproduced below is the version sent to Salon at 10:30 a.m. Eastern Time on Wednesday, April 29. It might not reflect all current signatories. "Children of Dust" author Ali Eteraz emailed this afternoon stating that he has since signed the petition as well.

Here is the letter:

If you are in sympathy with the following statement from some of your fellow members of PEN, please reply, and your name will be added to the list of signatories.

In March it was announced that the PEN Literary Gala, to be held May 5th 2015, would honor the magazine Charlie Hebdo with the PEN/Toni and James C. Goodale Freedom of Expression Courage Award in response to the January 7 attacks that claimed the lives of many members of its editorial staff.

It is clear and inarguable that the murder of a dozen people in the Charlie Hebdo offices is sickening and tragic. What is neither clear nor inarguable is the decision to confer an award for courageous freedom of expression on Charlie Hebdo, or what criteria, exactly, were used to make that decision.

We do not believe in censoring expression. An expression of views, however disagreeable, is certainly not to be answered by violence or murder.

However, there is a critical difference between staunchly supporting expression that violates the acceptable, and enthusiastically rewarding such expression.

Power and prestige are elements that must be recognized in considering almost any form of discourse, including satire. The inequities between the person holding the pen and the subject fixed on paper by that pen cannot, and must not, be ignored.

To the section of the French population that is already marginalized, embattled, and victimized, a population that is shaped by the legacy of France’s various colonial enterprises, and that contains a large percentage of devout Muslims, Charlie Hebdo’s cartoons of the Prophet must be seen as being intended to cause further humiliation and suffering.

Our concern is that, by bestowing the Toni and James C. Goodale Freedom of Expression Courage Award on Charlie Hebdo, PEN is not simply conveying support for freedom of expression, but also valorizing selectively offensive material: material that intensifies the anti-Islamic, anti-Maghreb, anti-Arab sentiments already prevalent in the Western world.

In our view, PEN America could have chosen to confer its PEN/Toni and James C. Goodale Freedom of Expression Courage Award upon any of a number of journalists and whistleblowers who have risked, and sometimes lost, their freedom (and even their lives) in service of the greater good.

PEN is an essential organization in the global battle for freedom of expression. It is therefore disheartening to see that PEN America has chosen to honor the work and mission of Charlie Hebdo above those who not only exemplify the principles of free expression, but whose courage, even when provocative and discomfiting, has also been pointedly exercised for the good of humanity.

We the undersigned, as writers, thinkers, and members of PEN, therefore respectfully wish to disassociate ourselves from PEN America’s decision to give the 2015 Toni and James C. Goodale Freedom of Expression Courage Award to Charlie Hebdo.