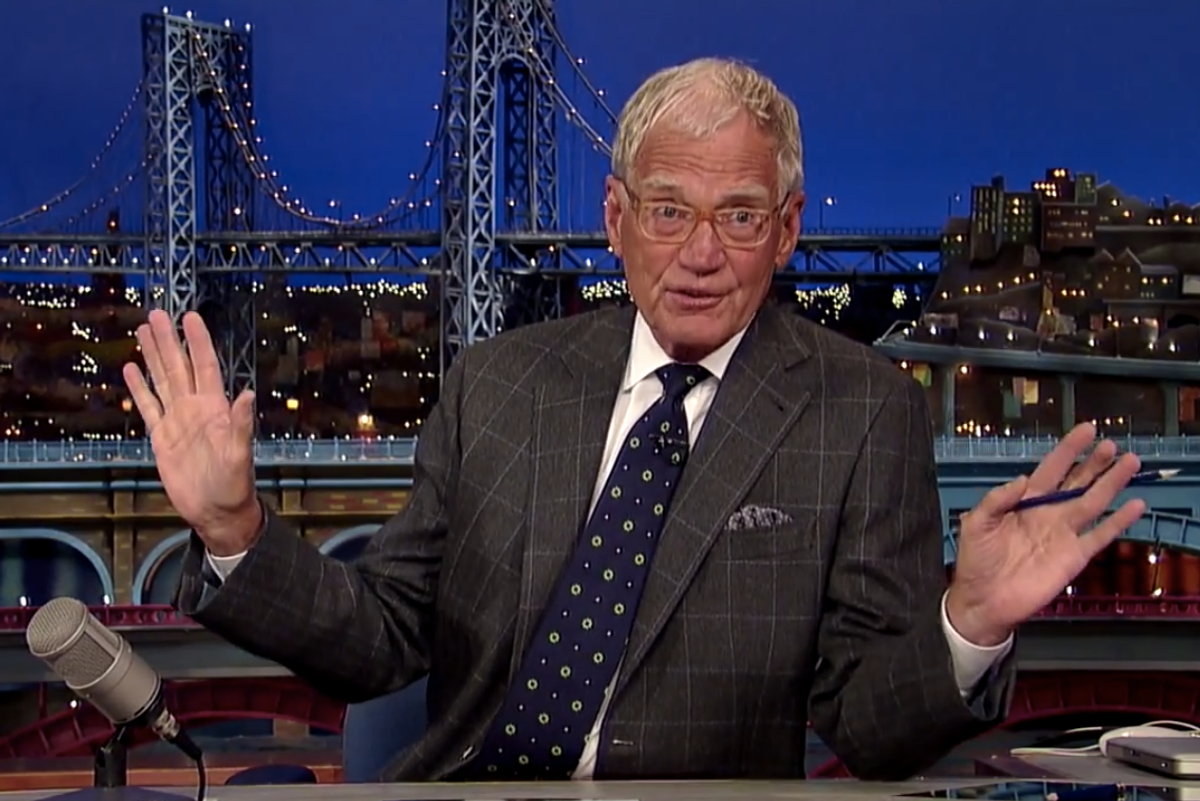 In preparation for his impending retirement, David Letterman sat down for a rare interview with the New York Times’ Dave Itzkoff. The Letterman on display throughout the lengthy interview is unusually candid and introspective, reflecting thoughtfully on the highs and lows of his 33 years on late-night television. In addition to sharing his thoughts on retirement, Letterman also reminisced about taking over for Johnny Carson, his infamous rivalry with Jay Leno, his 2009 sex scandal, the advent of the internet and getting "surrounded by the Jimmys.” Here are seven points of interest, and then go read the full story over at the Times.

On having no input over Colbert’s hiring:
The decision to hire Colbert was CBS’ alone. As Letterman puts it, "I always thought Jon Stewart would have been a good choice. And then Stephen. And then I thought, well, maybe this will be a good opportunity to put a black person on, and it would be a good opportunity to put a woman on. Because there are certainly a lot of very funny women that have television shows everywhere. So that would have made sense to me as well.” While he says it would have been nice to have been consulted, Letterman knows that Colbert doesn’t need his advice on how to succeed. "He's not a kid. He's not a beginner. He's had pretty good success."

On how leaving is hard:
Acknowledging that he has been more relaxed since the announcement was made ("there’s a difference between regular-season hockey and playoff hockey”) Letterman reveals that he will be very sad to leave the Late Show desk behind. As he puts it: “I'm awash in melancholia… [moving to California and having a child were the] two biggest things in my life, and they worked out beyond my wildest dreams. I’m pretending the same thing will happen now. I’ll miss it, desperately. One of two things: There will be reasonable, adult acceptance of transition. Or I will turn to a life of crime.”

On the Leno rivalry and taking his show down the wrong road:
Saying that he doesn’t think the Leno rivalry was overblown, he confesses that he took things down the wrong path in his early years at CBS. As he puts it, "we prevailed for a while, and then I lost my way a little bit...People just liked watching his show more than they liked watching my show." He continues: "It didn’t start to settle down until it couldn’t be more clear that Jay was the more popular show. And when we all realized that there’s not much we can do here — you can’t put toothpaste back in the tube — then we started going our own way again. I think it was just inevitability. The guy in the race who spends more time looking over his shoulder, well, that’s the mistake. For two years, I made that mistake. We ran out of steam."

On how he rebounded after his surgery and being a hero:
After his quintuple bypass surgery in 2000, in addition to being worried he would never be able to run again, Letterman feared that he might lose his job. "I was worried that somebody would go on while I was off with my heart surgery, and be good enough that they didn’t want me back," he says. "As I’m trying to recover from quintuple bypass surgery, I’m paranoid that my life is ending. And then, six weeks after the surgery, I ran for five miles. So let’s face it, I am a hero. There’s no two ways of looking at it.”

On his sex scandal:
Letterman also addressed the 2009 incident wherein he revealed, on his show, that someone was blackmailing him by threatening to reveal his affairs with a number of female staffers. Acknowledging that CBS would have had “good reason” to fire him, Letterman explains that he didn’t understand the full extent of what he had done. “At the time, I was largely ignorant as to what, really, I had done,” he says. "It just seemed like, O.K., well, here’s somebody who had an intimate relationship with somebody he shouldn’t have had an intimate relationship with. And I always said, 'Well, who hasn’t?' to myself. But then, when I was able to see from the epicenter, the ripples, I thought, yeah, they could have fired me. But they didn’t. So I owe them that.”

On "the Jimmys":
Letterman tells Itzkoff that the ascent of Jimmy Fallon and Jimmy Kimmel didn't push him out of the job, pointing to it as more of a generational thing. "No, they didn’t push me out," he says. "I’m 68. If I was 38, I’d probably still be wanting to do the show. When Jay was on, I felt like Jay and I are contemporaries. Every time he would get a show at 11:30, he would succeed smartly. And so I thought, This is still viable — an older guy in a suit. And then he left, and I suddenly was surrounded by the Jimmys.”

On his upcoming final show:
Letterman remembers Carson’s last show, and he says he doesn’t want his final outing, on May 20th, to be such a downer. "I can remember when he signed off that night, it just left you [with] a nagging sense of loss,” he explains. "This doesn’t apply here. I want it to be a little more cheery. And I want it to be upbeat, and I want it to be funny, and I want people to be happy that they spent the time to watch it. Of course, Johnny’s last show was historic. This one won’t be. [laughs] This one, people will say: 'Ah, there you go. When’s the new guy starting?'"