Neoliberals are killing us: The TED talk, techno-utopian, Thomas Friedman-economy is a lie

Neoliberal fantasy world is filled with daring entrepreneurs competing in a meritocracy. Do you recognize that? 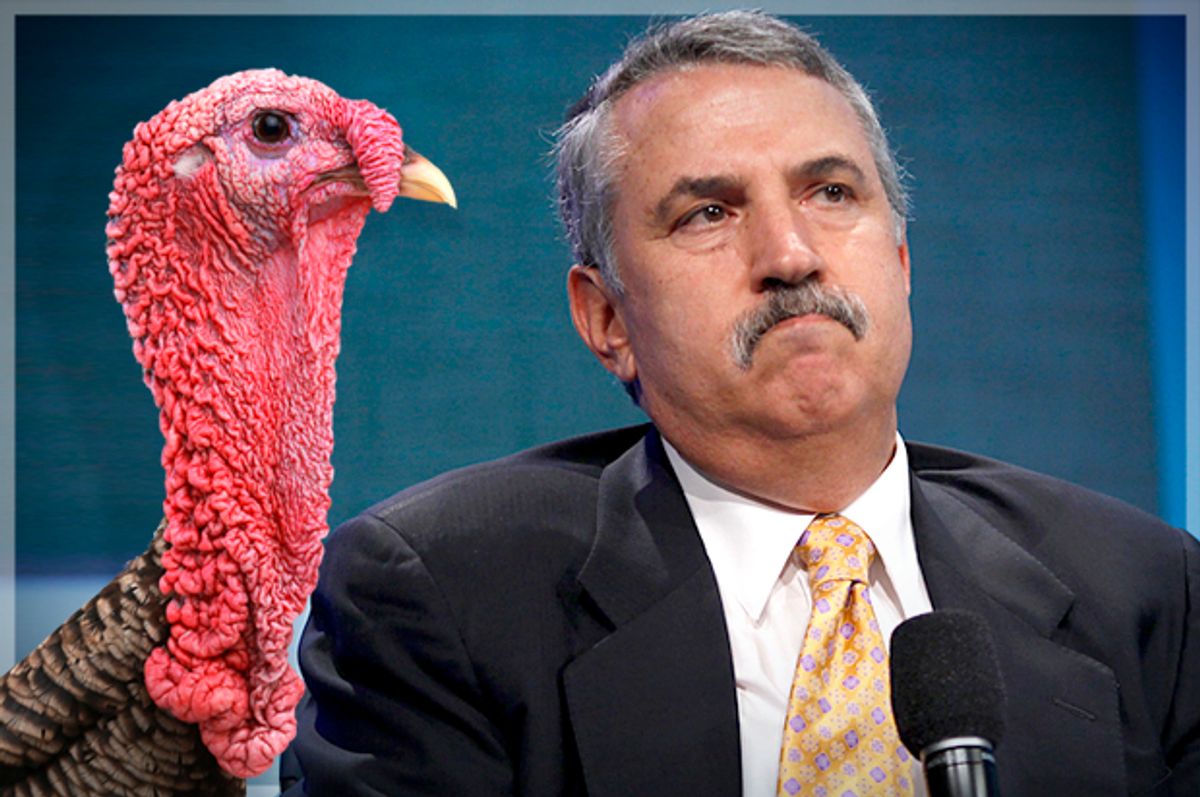 Last week, 295,000 Americans filed for unemployment benefits. Economists called it good news, as the number was less than 300,000; that's the line they say separates good news from bad. But it isn’t much less, and other news seems very bad. In February, housing starts plunged 17 percent. Inventories are high. Demand is low. Job growth is anemic. Still, economists say things are going so well we can raise interest rates. They call that good news -- though they don’t say for whom.

There’ll be more news this week: home prices, consumer confidence, new growth figures. In our casino economy we hang on these reports like blackjack players waiting for a dealer to turn the next card. Republicans and Democrats alike believe growth will cure all our ills. President Obama and Hillary Clinton call it their No. 1 economic priority. Despite all evidence to the contrary, they still believe a rising tide lifts all boats.

Some call Obama’s and Clinton’s economic worldview ‘neoliberal.’ Like ‘liberal’ or ‘conservative,’ it’s an imprecise word meant to signify a cluster of opinions; among them that globalization is inevitable and benign and that the revolution in information technology is fast democratizing commerce and politics. Neoliberals love fiscal austerity and free trade and are suckers for privatization, deregulation and ‘education reform,’ which they say will keep us competitive.

Like the neoconservatives with whom they often ally on military matters, neoliberals seem to regard our present political and economic arrangements as civilization’s final flowering, as close to perfect as one can get in a fallen world. It’s the faith that made Bush think Iraqis would greet us as liberators--who wouldn’t want to be us-- and why Obama bet his presidency on economic recovery rather than reform. It’s our establishment orthodoxy, the ‘bipartisan consensus’ we’re forever chasing. It’s killing us.

In the neoliberal narrative, geniuses reinvent the world in their garages; risk takers invest in innovation; technology and trade spawns endless opportunity. It’s a land without ideology; a true meritocracy where anyone with pluck and grit is sure to rise. (So long as they’re really, really smart.) Above all it’s an engine of prosperity, the only sure means by which to broaden and strengthen the middle class.

Real life is nothing like the neoliberal narrative. As PayPal’s Peter Thiel says, our overhyped innovations tend toward mere gadgetry and away from such vital areas as health and transportation. One reason: those stories about geniuses in garages and their angel investors are mostly made up. In 2014 venture capital funding hit $48.3 billion, but just $700 million of it went to ‘seed stage’ projects. Who really funds the little guys? The same folks who brought you the microchip, the Internet and GPS. Last year the federal government’s Small Business Innovation Research Program alone lent or gave the real pioneers $2.4 billion; more than triple their take from ‘venture capitalists.’

If the story of our not-so-bold investors disappoints, it may matter less than you think, in that technology and trade never really lived up to their billing. In 2005, Tom Friedman, the Candide of globalization, said “the world is flat”; meaning technology was a great leveling force that would soon topple the old political and economic oligarchies and give everyone a chance to be an entrepreneur, or at least work in a call center. America has since grown more economically stratified and politically corrupt and has fewer jobs than it did eight years ago.

Early critics who said the new information technology would lay waste to labor were dismissed as Luddites. Twenty years on it still kills more jobs than it creates; even ‘serious people’ now say this could be the first new technology wave to result in a net job loss. As for trade, the tide let in by NAFTA sank more middle-class boats than it lifted, which accounts for the resistance to Obama’s fast track scheme.

In real life, we’re a nation of middle men and corporate toll collectors, where health insurers get 20 cents on the dollar for services done everywhere else for a nickel or less; where big banks shun small business while raking in merger fees and taking a cut of every purchase charged to a credit card; where Comcast’s pipeline is worth more than NBC’s oil; where Google gorges on ad revenues that once supported world-class journalism. We’re about cartels, not startups, not bound to the future but mortgaged to the past.

In real life, the middle class is in limbo. In the seven years since Wall Street’s crash, stocks, profits and CEO pay are at historic highs, but wages haven’t budged and we’re still years away from adding back all the jobs we lost. Millions of older Americans who lost their pensions and the equity in their homes will retire broke. Millions of younger Americans fear they’ll never have their parents’ opportunities. They all know it will take more than a bailout or a stimulus to get our economy, or their lives, back on track. You can’t prime a broken pump. We need real reform and everybody knows it; everybody, that is, except those in charge.

The gap between elite and popular opinion on these issues is wide. Tension boiled over on the right long ago, but Democrats have mostly kept mum. It reflects their fear of Republicans, and the fact that Obama and Clinton are staunch neoliberals. Bill Clinton, more than anyone, made the consensus bipartisan. Hillary’s rhetoric has a more populist hue now, but changing her actual views won’t be easy for her.

The backlash against neoliberalism cuts across all political categories. If the Democrats resist debating it, progressives must force a debate. But they too may be reluctant, not because of any risk—there’s greater risk in silence—but because they don’t know what to say. Many progressive critics of neoliberalism are just like Republican critics of Obamacare; they hate it, but can offer no alternative.

It’s understandable. The very purpose of a political debate is to test our ideas. We progressives knock Democrats who duck debates but it’s been a while since we’ve had one of our own. I don’t mean the daily squabbles we all seem to enjoy, but a big debate that draws our whole community and eventually the nation in. We know we’d raise the minimum wage and tax the rich. But do we know our bottom line? We reject soulless, mindless globalization, but can we picture a more just and humane order? If so, we can start to frame policies to support it. I’ve only a few fragments of a vision, but hoping to extend the conversation, I’ll describe them.

Right now, before our eyes, a new economy struggles to be born. It’s more democratic than the one we have. It prizes smallness, permanence and community. It favors cooperatives and other collaborative forms of ownership and production. It reclaims the commons we own in trust for future generations. It’s local and sustainable. It both needs and fosters civic renewal. It’s growing now despite great resistance, but its final success or failure is up to us. I’ll offer some examples, first a less exotic one. It’s of an old familiar institution readapting to changing times.

I speak of independent bookstores. By 2009 the big chains had nearly wiped them out. They hit rock bottom: 1,651 stores. Then to everyone’s surprise, they revived. The number of stores has since grown to 2,094, a 25 percent increase in six years. Sales are up, and at a brisk 8 percent annual rate. It turns out that in the age of information overload, thoughtful curation means more, not less. The Internet that nearly killed them also provided a cheap way to advertise. And by expanding their activities, they built community and played to their great strength, their customers’ love of books and bookstores. To many the future of small-scaled enterprises looks bleak, but the independent booksellers’ story is one of many that suggests that in the new economy, small is beautiful.

The new economy favors forms of ownership and production that foster democracy and collaboration. You may recall George W. Bush’s blather about an ‘ownership society,’ a greedy scam to privatize Social Security and Medicare. For many years real reformers have been building a real ownership society. A familiar tool is the employee stock ownership plan. (ESOP) Often underestimated, today 11,000 ESOPs now employ nearly 11 million workers. Benefits range from higher job satisfaction and wages to improved productivity and in hard times, fewer layoffs.

ESOPs are most typically born via conversion of an established business on its owner’s retirement. Chris Mackin, a leader in the field, says coming retirements of so many baby boomers offer a chance for rapid growth. Mackin also urges use of other forms of employee ownership and seeks new government policies, including possible set asides for employee owned businesses. Having worked in the field for thirty years, he feels its best days are not only ahead of it, but imminent.

Some very innovative thinking concerns the public commons. The phrase has always meant y resource owned and used by the public but it applies in new ways to new things, from public lands to the internet and the airwaves. One goal is to preserve priceless public assets; another is to compensate the public for private use of its resources.

Peter Barnes, a journalist, activist and public spirited entrepreneur, has called for a dividend fund patterned after the Alaskan fund that distributes state oil revenue to all citizens on a pro rata basis. He’d first target companies that pollute the air and says the government could collect enough money from all sources to write every American a check every year for $5,000.

The commons may refer to peer to peer production, a process by which people collaborate as equals to produce things of value, often with little or no pay. It may sound arcane but examples include Linux, Mozilla Firefox, and Wikipedia. David Bollier, a brilliant strategist of the commons, says the challenge is to protect such work from rapacious monetization by corporate actors. Another challenge for all cooperatives is to preserve an ethos of public spiritedness as enterprises scale up.

In their different ways, independent booksellers, ESOP owner/ employees and open source programmers are helping to engineer our next economy our next new economy. The 11million who work in ESOPs enjoy good wages, benefits and job security. The booksellers are among the 14 million Americans who work for very small businesses. The programmers may be among the 6 million Americans who work from home or the 10 million who are independent contractors. For income and benefits, most of them are pretty much on their own.

All have these things in common: Their government doesn’t think much about them. They don’t think much of it. Their needs are ill-served by current economic policies or by having both major so closely tied to the old order. You can count them different ways and never with confidence, but it’s likely they comprise as much as 15 percent of the workforce -- and they grow by the hour. They haven’t a sense of themselves as a political force but one party or the other soon will. When that happens, I hope they hold out for real answers.