The racist end to the War on Drugs: "White America’s just trying to figure out how to take our money"

Many are justifiably relieved that the ban on marijuana is winding down. But have we really thought this through? 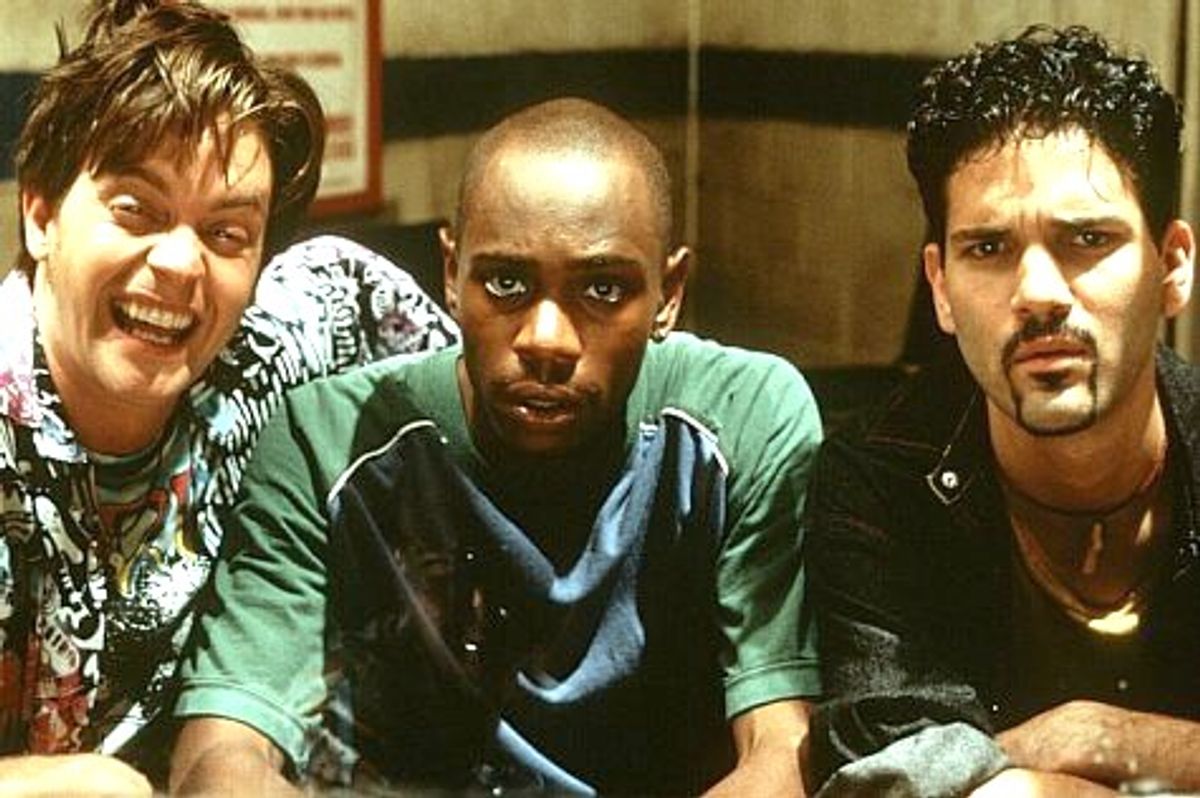 On Tuesday, President Obama took time out of a press event for the mammoth Trans-Pacific Partnership trade deal to address the recent unrest in Baltimore. In contrast to the secrecy surrounding the much-maligned trade pact, the president was frank and unblinking in his diagnosis of the urban ills left to places like Baltimore, calling for nationwide “soul searching” about the conditions that lead to eruptions in places like Baltimore. He described the dangerous ubiquity of “communities where there’s no investment and manufacturing’s been stripped away and drugs have flooded the community, and the drug industry ends up being the primary employer for a whole lot of folks.”

If Baltimore and other American cities are powder kegs now with an underground drug economy to partially sustain them, what happens if the drug economy begins to fail them? What happens when the biggest drug of them all is legalized and its revenue is no longer available to those urban markets? Have we thought marijuana legalization all the way through?

Sure, citizens will get to enjoy a substance less harmful than alcohol without worrying about the jakes. And states will benefit from the tax revenue. The criminal justice system won’t be choked with nonviolent citizens, nabbed on senseless pot-related prohibitions and incarcerated to the tune of $30,000 to $60,000 a year -- savings which, combined with new tax revenue, would do much to shore up state budgets.

It might seem like a win-win, and it’s on its way. The number of states in which pot is legal for recreational use (four) is expected to balloon in the near future, with five or more states poised to put the matter on ballots in the next year. Others are expected to vote on legalization as the experiment proceeds. Big states, too, like California, New York, and Florida. Medicinal use, which opened the door for full legalization, is being seriously discussed even in Southern statehouses.

But there’s a vast underground economy that’s developed to produce and distribute the illegal plant. There will be substantial job loss in the criminal underground once that market dries up, essentially entirely. University of Maryland economist Dr. Peter Reuter, one of the leading scholars on the underground drug market and co-author of the most extensive study of the marijuana economy for the RAND Corporation, calls the pot economy “the largest individual drug market, substantially larger than cocaine and substantially larger than heroin.” A cabinet-level White House study in 2006 put the percentage of cartel revenue derived from marijuana trafficking to the U.S. at 60 percent. The Mexican Attorney General’s office estimates that marijuana constitutes nearly 50 percent of the horrifically violent Mexican drug cartels’ revenue. Reuter is dismissive of that study and puts the number lower, but it remains that pot’s illegality has created a massive economy on which many depend for their income.

Reuter and RAND do concur that majority of pot consumed by Americans is from the Mexican cartels, around two-thirds. The other third comes from domestic sources, mostly California’s higher-quality marijuana. The bi-national underground production and trafficking economy would, in the event of national legalization, be absolutely decimated.

The largest cartel, the Sinaloa organization, is said by the FBI to involve 100,000 gang members in Chicago in trafficking its product. It is impossible to know how many of those Chicagoans--and those in similar organizations in every major American city--are dedicated to marijuana trafficking and derive their income from the trade. The experts I spoke with stress the magnitude of gang manpower devoted to cocaine, heroin and other hard drugs, and the relative slight employment in marijuana trafficking. But Reuter and RAND’s estimates put the cartels’ U.S. export market at $20 billion. The high-end domestic product distribution is about the same size, putting the entire pot market at a staggering $40 billion.

Columbia professor Dr. Sudhir Venkatesh, perhaps the nation’s foremost scholar on gang activity, predicts job loss in the thousands in places like Chicago if legalization eliminates marijuana from that city’s underground economy. “There will be a dramatic reduction in the number of people who are able to use [the marijuana] economy as a survival strategy,” says Venkatesh, who rose to scholarly prominence with his best-selling "Gang Leader for a Day," in which he describes his seven years of work embedded in a Chicago gang in that city’s now-destroyed Robert Taylor homes.

Jonathan Caulkins, Carnegie Mellon professor and co-author of "Marijuana Legalization: What Everyone Needs to Know," puts the potential coming crisis in stark terms: “Once fully nationally legal, there will be almost no jobs for illegal production and distribution.” Venkatesh stresses the impact on communities and city sections in which the above-ground economy has largely failed to provide employment. He says that people tend to underestimate how marijuana trade has become “a way for minority youth to supplement household income near poverty line.”

“We tend to read about the high-end market, which is interested in high quality,” says Reuter, “but the market is in fact mostly low socioeconomic status, and that’s much more a Mexican commercial grade.”

While we might imagine drug sales as the lavish life glorified in rap music, those top spots rappers celebrate are populated by a rare few. The bulk of drug work is low-paying. Venkatesh calculates that most members of drug gangs make around minimum wage or below. It is like any capitalist economy: The many work for little from which the few at the top benefit. Except it’s a bit more martial than, say, the tech sector.

Venkatesh worries that the job loss coming with legalization will push those newly unemployed “into a way more dangerous underground market.” He points out that the “economic growth that is occurring [in the U.S. economy] is not reaching the population that might need it the most.” Going largely unconsidered in the discourse about legalization is this already-desperate workforce, “the army of young folks, urban folks who are in the central city or inner ring of suburbs,” says Venkatesh.

Despite the rural distribution networks and the stratum of social distribution that Reuter and Caulkins describe--the sharing of weed past the final point of sale--U.S. marijuana distribution employs and benefits a substantial number of black Americans left behind by the above-ground economy.

“There’s going to be racial effects,” warns Venkatesh. State by state, pot may be coming out of the shadows of illegality, but there’s a surprising twist in its final act: The drug war is racist even when it ends. The legalization of marijuana will bring hardship on a colossal scale to some, while providing a brand new sector of the economy for others. And that allotment can be predicted to fall pretty cleanly along racial lines.

It’s not only academics who are beginning to foresee a racial transfer of the market from minority to white control. Crissle and Kid Fury, hosts of the extremely popular black-oriented podcast The Read, recently took the opportunity while answering a “listener letter” from a pot dealer to launch into one of their famous tirades.

“White America’s just trying to figure out how to [sell marijuana] and take our money,” began Kid Fury. “They’re gonna be out here doing the same shit they’ve been locking black people for doing for the past I don’t even know how many decades.”

An extensive report by the ACLU in 2013 corroborates Crissle’s claim, finding black Americans to be almost 4 times as likely to be arrested for marijuana charges, despite usage being roughly equal between whites and blacks.

Venkatesh worries that the burgeoning legal pot economy already “supports a largely white population,” and that it’s difficult to imagine that trend changing, given fundamental racial perceptions. “Retail stores are loathe to put an African-American face in front of an organization.”

Caulkins describes the production end once legalization reaches the national level. “Once a professional Iowa farmer can grow the stuff, many of these folks will be road kill,” he says.

President Obama recently invited David Simon, creator of "The Wire" and outspoken critic of federal drug policy, to the White House to have a surprisingly frank discussion about the drug war’s failures. Obama, a huge fan of "The Wire," had to have known what he would be getting into in engaging with Simon. The invitation thus looked designed to be an early event to begin a potential late-tenure relaxation of the four-decade drug war. With the rapidly changing attitude toward marijuana, and state-level legalization shift continuing apace, something to do with pot laws would present itself as an easier ask than more ambitious approaches to dramatic reform.

But we’re going to have to understand that legalization isn’t simply the hazy wonderland described in dorm rooms while Peter Tosh plays. Legalization might be long overdue, but it will likely mean the destruction of livelihoods on a large scale. The underground economy from which so many of us have benefited (the past three U.S. presidents have smoked pot and thus relied on that trade, to one degree or another) will be thrown into turmoil. And it’s difficult to imagine Washington passing any kind of jobs bill sufficient to provide work the newly unemployed. A new wave of desperation will descend on communities already desperate in the wake of post-industrialization, Reaganism, globalization and the economic collapse of 2007-08.  Moreover, the fate of the dealers, traffickers and producers whom the State now warehouses in prisons rarely enters the discussion of the what happens in the jubilant days after legalization. Does justice mandate that we commute nonviolent, pot-related sentences after legalization? This giddy and myopic selfishness, which largely fuels the hastening forward movement on legalization, must be tempered.

By all means, let’s get high legally, but much sober thinking is needed going forward.