Egypt gets a revolution, Baltimore a riot: Why hasn't radical empathy started at home? 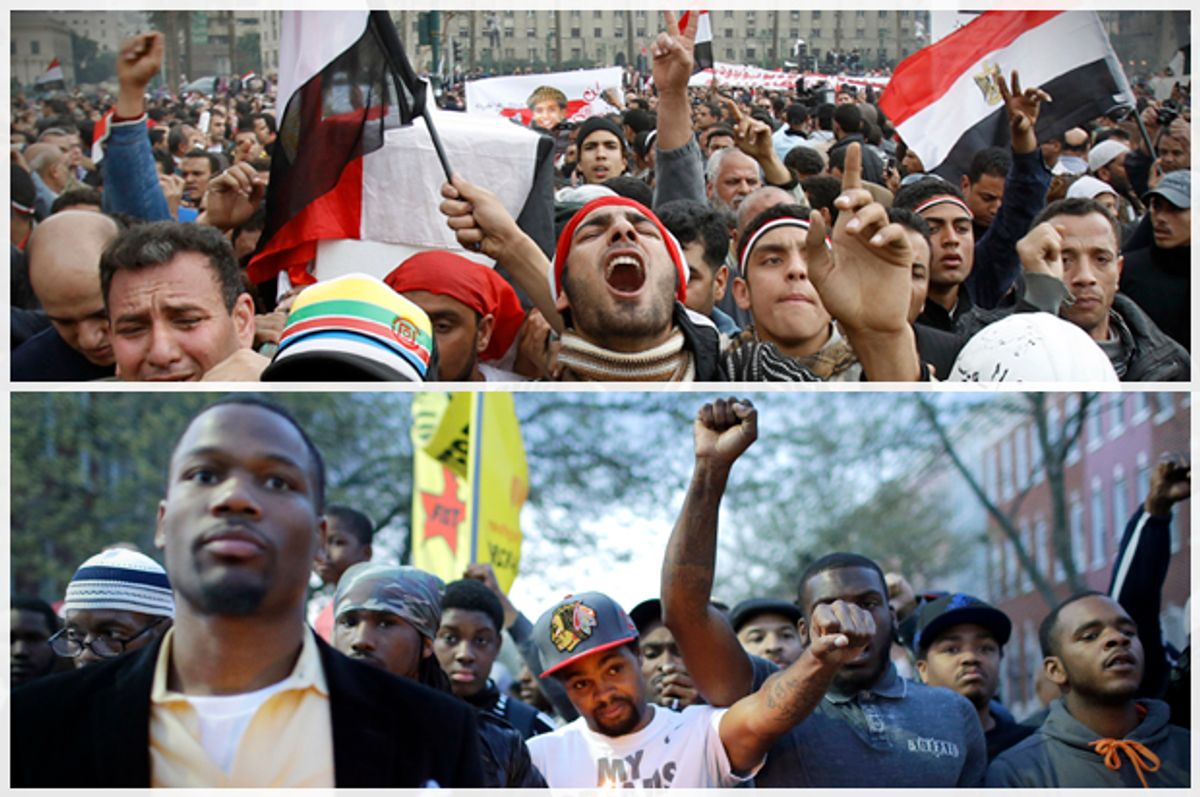 If you happen to be a person who has felt it necessary this week to enter conversations about police brutality or pervasive racial inequality or riots in order to insert your concern for Baltimore residents and business owners affected by the small faction of otherwise peaceful, nonviolent protesters rallying after the recent death of Freddie Gray, stand down.

Can it be a given that empathy is not zero sum? We can acknowledge that the system is fucked up and broken, or that we’re in dire need of an infrastructural overhaul, or that people who are routinely terrorized and fear for their lives are perhaps logically justified in feeling angry or even daring to express that anger publicly — none of this also implies an automatic condoning of burning Baltimore to the ground.

It also doesn’t mean we’re prevented from finding it unfortunate that sometimes everyday people – kind, hardworking, engaged members of a community – might find themselves on the receiving end of property destruction or looting. There’s room here to understand that these individual losses are difficult and sad and unfair, and if we can put a little more good into the world by keeping these people in our minds or in our relief efforts too, great. Let’s.

But then let’s take a step back. In the context of repeated, unjustifiable violence affecting a disproportionately large number of minority victims at the hands of undertrained, careless or – worst of all – aggressive and unchecked police officers, a ruined storefront becomes pretty irrelevant. Not any less deserving of a community’s empathy in the aftermath. Not any less important to the business owner. But as a part of the entire conversation: Not. Relevant.

If the scariest thing you see happening in America is that 100 or so protesters in Baltimore became rowdy and destroyed a handful of buildings, wake the hell up. More terrifying: a black kid walking through a neighborhood with a toy gun is murdered by police. More terrifying: a young man holding a toy gun in a store that sells toy guns becomes yet another police homicide.

Yes, every life does matter. Yes, it’s true that not every police officer engages in this type of behavior. These basic facts are known and understood. When we create a space to talk specifically about how black lives matter, because those are the lives that are being overwhelmingly lost to police brutality, we don’t suddenly fail to remember that other human lives hold worth as well. Are we so obtuse, so self-centered that we honestly can’t stand to let those spaces exist without feeling threatened and then jumping in at the first opportunity to loudly remind everyone that if we wanted to, we could be talking about different people instead?

It’s easy to crow #BlueLivesMatter (and they do!) when the majority of interactions you’ve had with police have gone as they’re supposed to, when the system in place to protect us against potential abuses of power works exactly as we trust it will.

These incidents aren’t isolated or sporadic – they were written into the narrative decades ago and continue to occur regularly throughout the country. Each year, police departments in major cities cost taxpayers tens of millions of dollars in lawsuit payouts for what is politely termed “misconduct.” In the last ten years, settlements in Chicago alone have reached nearly half a billion. Nationwide, these violations consistently target a disproportionate number of minority recipients.

In a conversation with Bill Keller at the Marshall Project, former reporter and creator of "The Wire" David Simon, discusses Baltimore’s long-standing culture of police brutality and mistrust, dating back at least to the early '80s:

…the need for police officers to address the basic rights of the people they were policing in Baltimore was minimized. It was done almost as a plan by the local government, by police commissioners and mayors, and it not only made everybody in these poor communities vulnerable to the most arbitrary behavior on the part of the police officers, it taught police officers how not to distinguish in ways that they once did.

And not just Baltimore, OK? #ALLCitiesCanOppress! Mother Jones reports that in New York from 2001-2011, there were four times as many black victims of police homicide than white ones. Records from between 2004 and 2008 in Oakland, California, show that 37 of 45 officer-involved shootings were of a black victim. Of those 45, not a single victim was white.

CNN commentator and activist Marc Lamont Hill spoke earlier this week about what happens when oppressive power remains unchecked, and recourse is not available for those victimized by racially motivated targeting or excessive violence. “I’m not saying we should be hurting people; I’m not saying we should be killing people,” Hill clarified before offering a necessary perspective about the events unfolding in Baltimore: “We do have to understand that resistance looks different ways to different people…. The city is not burning because of protesters. The city is burning because the police killed Freddie Gray.” And not just Freddie Gray. “There shouldn’t be calm tonight,” Hill explained. “Black people are dying, have been dying in the streets for months, years, decades, centuries.”

Yesterday, Yaba Blay Iyawo Oya shared this note on Instagram accompanying a picture showing both Egypt and Baltimore in turmoil:

when it was Egypt, you called it a REVOLUTION. when it is Baltimore you call it a RIOT. if you had no questions about why Egyptians were burning shit down IN THEIR OWN COMMUNITY, ask no questions about Baltimore. chew your words well before you swallow them. #BaltimoreRising

America was founded by fighting radically against our oppressors – it took a revolution and then a war to win our freedom. There was even some rioting and some burning of things.

If, through the witness and experience of your community, you came to understand the strong possibility that a police officer might deny your rights or brutalize you or murder you, and that this might happen regardless of how well you did in school, or what job you held, or whether or not you were engaging in any illegal behavior in the first place, or who was or wasn't waiting for you back home; if you learned that the body in place to protect you from having your rights denied or being brutalized or being murdered was the same entity engaging in that behavior, what recourse would you feel was available to you? To your children? After years of talking about it, of gathering and marching and holding signs about it, of photographing or hashtagging or making a popular TV series about it without much changing, at what point might you set down your protest sign and seek a new way of making yourself and your worth more visible? Eventually, maybe you would set something on fire too.