I was one of the last Americans to leave Saigon: Dick Hughes' Vietnam oral history

"The bottom line is that none of us belonged there. Not Westmoreland, not Bill Colby, not Ellsworth Bunker, not me" 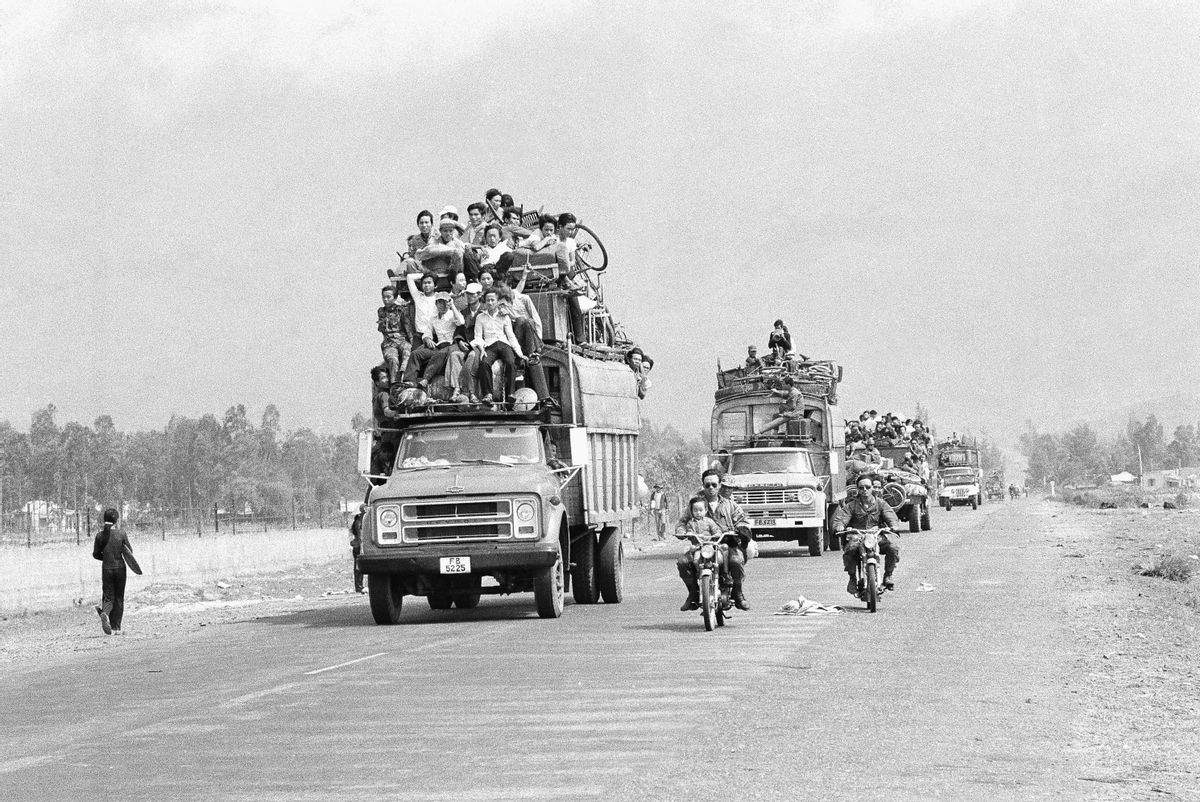 The Vietnam War came to a dramatic end 40 years ago this week with the “fall of Saigon.” Though most of our memories of that climax are dominated by scenes of panicky evacuations, here is the account of an American who chose to remain in Vietnam for an additional 16 months. This is a companion piece to Christian Appy's study of American foreign policy since Vietnam, which can be read here.

We wait for a booth in a packed New York City deli. Despite the lunch-crowd racket, it's easy to hear the handsome, gray-haired actor who can project his voice.

How he got to Vietnam is itself a long, complicated story. First he received conscientious objector status, then it was revoked. Another draft notice arrived. In response, he refused induction but went to Vietnam anyway, as a civilian. He had a vague plan to do some sort of social work.

He arrived in April, 1968. Within hours he found himself in a park talking with a group of Saigon street kids. "For the first few days I kept running into these same eleven kids. They slept on the streets and were perpetually arrested for vagrancy and taken down to one of the jails. I thought, gee, if I got a place that was big enough, I could give these kids a place to stay."

Building on his experience with those first eleven children, he organized the Shoeshine Boys Project and hired Vietnamese staff volunteers who themselves opened seven new homes. Eventually, the project provided housing and job training to some twenty-five hundred homeless children.

He made several trips back to the states to raise money, sometimes appearing on television programs like "The Mike Douglas Show." When the Communists took control of South Vietnam on April 30, 1975 Americans saw the searing images of terrified refugees, desperate evacuations, and final defeat. The tableaus of fear and flight made it seem as if no American in his right mind would remain. Yet Dick Hughes stayed in Saigon and continued his work for more than a year, not leaving until August 1976.

The Vietnamese in the area didn't know what to make of me. Who was this guy living with these kids? They'd never seen anything like it. At one point they heard that my name was Dick which sounded to them like the Vietnamese word for ass, which is "dit." So one day I was coming down the street and people went "Anh Dit!  Anh Dit!" I thought I was suddenly getting accepted into the community. I found out later from the kids that they were saying, "Hey, older brother Ass!" That sort of said it all about the American involvement in Vietnam--the gap between what was actually happening and what you thought was happening.

One of the things that made the kids so engaging was that they had been through so much you could talk to them about anything. They had so much adult experience you sometimes forgot they were kids. That was appealing, but then there was always some painful reminder of how much their experience had cost them. For example, when one of the kids got stabbed and was in the hospital they couldn't get the IV into one of his veins. So one of the other kids who had been a drug addict said, "I'll do it." Finally they agreed to let him try and--boom--he put it right in.

So my effort, in a way, was to allow them to be kids again. Ironically, as an American I could draw them in because I did not require them to live in Vietnamese society as other people lived. With me, as an outsider, they didn't have to confront everything that had taken such a toll on them--the death of their families or being destitute in the streets or whatever they had seen in the war or in the city. But I soon realized that I couldn't take them to the next step of helping them fit back into Vietnamese society.  Only Vietnamese adults could do that.

The kids were destitute, but they were all so keenly aware of what Vietnamese culture had been and what it had turned into. The first time I saw one of my kids working as a pimp right in front of the house I was mesmerized. This GI was saying "You get me number one girl?" And the boy says, "Yeah, sure--she's number one!" This kid went into the inner neighborhood and got one of the neighborhood prostitutes. I followed them up the street and the kid saw me watching. He said, "Come here." So we were both standing there looking at this GI and the prostitute going into a hotel. He said to me, "You see that woman?  She's not Vietnamese." I said, "Yes she is.  I heard her talking." He said, "No, she's not Vietnamese. A Vietnamese woman would never do that."

There was another kid named Minh who had two small deformed legs that he folded up on a little bike. He rode it all over Saigon. He would put his legs on the handlebars and peddle with his hands. He strapped his shoeshine box on the back and was perfectly self-contained. He'd zip off downtown to shine shoes and come back late at night when a lot of the kids were asleep. When Minh got home he had this little routine. He'd shower and then sit down in front of his footlocker and start writing. And every night while he was doing this he would sing this little song about a cricket. I'm not sure if he made it up or if it was common to the Vietnamese. But all the kids who were still awake would hear the cricket song.

Minh had a lot of trouble with the police. Cops picked on street kids for money, or because of pressure from higher up to get them off the streets, or simply because, like lots of people, they felt the kids deserved it. I think Minh was too independent for them. He said to me, "Someday I'm going to commit suicide." Then he tried to. He crushed a bunch of pills and took them. In the hospital a Vietnamese doctor, a friend of mine, said "We've done what we can do. But he's in a kind of coma and we don't know if he'll make it." So that night I stayed in the hospital and slept at the other end of the bed. In the middle of the night he looked over with these droopy eyes rolled back his head and said in English, "I told you, Dick; I told you I would do it."

That was in 1970. He survived the suicide attempt only to be run over by an American military vehicle a couple months later. It was devastating. After Minh's funeral we all came back to the house. I was sitting in a funk with Pham Van Tuynh, a student staffer. Tuynh reached over and started looking for a word in his Vietnamese-English dictionary.  After a few minutes he said to me in this deep resonant voice, "I think Minh was oppressed all his life." And one of the kids who remembered Minh's song wrote on a metal cabinet in chalk, "Someone please go buy for me a cricket."

When the war ended I was so deeply rooted in the community I didn’t see it as a signal to pack up and leave. I didn’t feel threatened. But I knew that my work was going to be over eventually because it was always my position that the Vietnamese, if left to their own designs, could handle whatever had to be handled. And after the war the attitude of the Vietnamese was sort of like, “Thank you for your work with the children of Vietnam. We’ll take care of this now.” And, of course, a few were sure that any American who was still in Vietnam must work for the CIA so I’m sure, on occasion, I was a target of suspicion. But I was in no rush and never wanted to be identified with the Americans who were running around scrambling to get out. So I left in August 1976, the last American, so far as I know, to leave Vietnam other than Robert Garwood, a former POW who chose to stay in Vietnam, returned to the U.S. in 1979, and was charged by the government with desertion and collaboration with the enemy.

If I had to do it all over again, I wouldn't go to Vietnam. My moment-to-moment work with the kids was great and the project had wonderful things about it. But I felt complicit in continuing the war. In essence we were participating in the war. We were keeping these kids alive, but eventually they had to go into the army and become soldiers. You do this project and help kids and they survive to go to a bloody massacre. I don't know how many died.

One of the hardest moments I had in Vietnam was right after the war ended. A week after the American evacuation I was walking downtown and I heard someone call me. I froze for a second. I knew the voice--it was the voice of one of the original eleven kids. "Anh Dick," "Anh Dick." His name was Thach Chon. He had been the leader of the first eleven kids. He had a very engaging and gentle personality. When I heard his voice I turned around. He was standing there on crutches missing the lower half of one of his legs. I walked the long walk over to him and we looked at each other and flashed back to all the old times and what a distance we had come. Everything had changed and nothing would be the same again.

The bottom line is that none of us belonged there--not William Westmoreland, not Bill Colby, not Ellsworth Bunker, and not me. This entire American event had absolutely nothing to do with the reality on the ground, with the Vietnamese, with their history, and their culture. It was just like this huge fireball rolling into their neighborhood and then back out.

I remember one time a woman working in a refugee camp told me, "I don't think what I'm doing is useful. I don't think what I'm doing is helping the Vietnamese. We bring them into the camps and turn their villages into free fire zones." I said, "Well, why don't you stop?" She said, "I can't because I need those feelings I get from giving things to people." I said, "Okay, that's fine, that's pretty honest. But do me a favor. When you go back to the United States and people ask you what you were doing, don't say you were helping the Vietnamese people."

In addition to his ongoing acting career, Dick Hughes has been deeply involved in efforts to push the U.S. government and American chemical companies to provide assistance to the Vietnamese victims of Agent Orange exposure. His website for this work is:  http://www.loosecannons.us/about-us.html

Christian G. Appy is the author of American Reckoning: The Vietnam War and Our National Identity (Viking, 2015). He teaches history at the University of Massachusetts, Amherst. A shorter version of this oral history was previously published in The Massachusetts Review.