Fox News blames Baltimore for America's sins: What Hannity & O'Reilly ignore about the roots of the Freddie Gray tragedy

Sean Hannity & Bill O'Reilly blame unrest on liberals and black communities. But, in truth, America is to blame 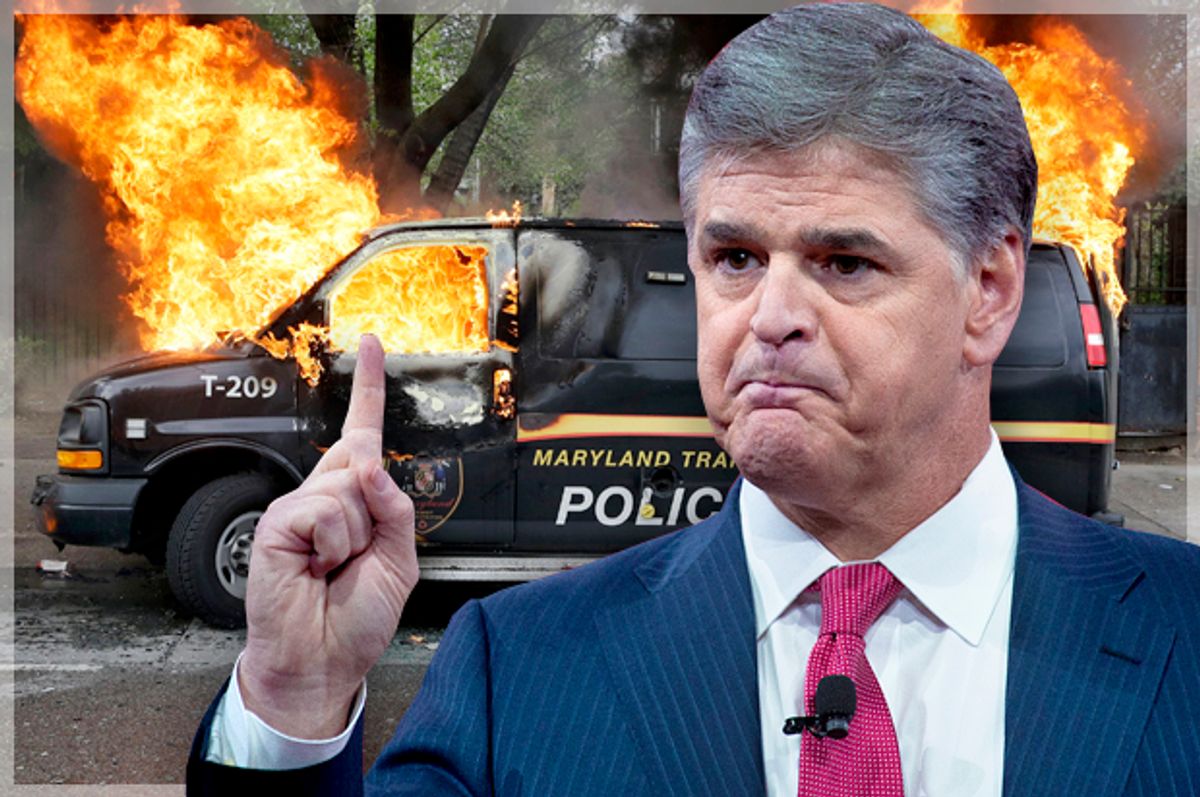 Over the past week, as protests have spread across the country and violence has calmed, there has been a lot of discussion about why such destruction broke out in the streets of Baltimore, and why there is such rampant poverty and crime in those streets. There has been a lot of confusion throughout, but in the right-wing media, it is quite clear what has caused the current chaos in Baltimore -- the Democrats and their bleeding-heart welfare programs.

Indeed, on the right wing, there is simply no other cause for what has happened than the black communities' dependence on government handouts. Of course the children are going to destroy the community when all of their mothers are single welfare queens! To Bill O’Reilly and Sean Hannity, this is quite simply a problem of black culture and dependence: “With all due respect, the government cannot create opportunities for young people who are uneducated, disrespectful and unmotivated," O'Reilly said. "The city of Baltimore has been run by black politicians and Democrats for decades.” On his own program, Hannity resounded: "Isn't this a minority-run city?"

Now, the right will push this premise until it is blue in the face -- because it sees the events in Baltimore as an opportunity. An opportunity to blame black people and Democrats for all of the problems that are currently under a microscope. One headline over at Breitbart effectively sums up this strategy: “Baltimore is a Democrat problem, not America’s problem.”

The notion makes the people over at Breitbart and Fox News guffaw with joy. Yet again, they can blame black people and Democrats. It's not Bill O’Reilly’s problem that children living in poverty can’t pull themselves up by their bootstraps and make something of their lives, like he did. Of course, Bill grew up in the middle-class suburbia of Levittown, where poverty and police abuse weren’t especially pressing problems. Just don’t blame him for that!

Of course, the right's perception is laughably myopic and predictable. When is it not the “welfare queens'” fault over at Fox News? In reality, what has happened in Baltimore over the past 50 years is not a black problem or a Democrat problem -- it is as American a problem as they come.

Back in the mid-20th century, Baltimore was a booming manufacturing hub, as were many other cities that today have become shadows of their former selves, such as Detroit. In 1916, Bethlehem Steel bought a steel plant in Baltimore, and by the Second World War, more than a quarter of a million people were employed in the city's manufacturing industry. This was the so-called Golden Age of American capitalism, where manufacturing accounted for 50 percent of corporate profits and 30 percent of American employment. Today, by contrast, industry profits have dropped to about 20 percent, and employment has dropped to less than 10 percent. This is not a phenomenon unique to Baltimore -- the process of deindustrialization has occurred throughout America, turning formerly thriving cities into impoverished ghost towns.

There are various reasons for why America’s manufacturing industry has fallen from grace, but the two major ones are globalization and technological innovation. Globalization, which really began to take off in the '70s and '80s, has made capital much more flexible, and today many companies choose to produce in developing countries where labor costs are significantly lower, owing in large part to scant protection for workers, who make a fraction of what it would take to live a decent middle-class lifestyle. Technology has been even worse for America’s middle class; it has been reported that the great advancements in computer and robotic technology over the past few decades have hollowed out the middle class and destroyed jobs faster than it created them.

Baltimore was hit hard by deindustrialization -- in the latter half of the 20th century its industrial workforce was depleted by 75 percent. And as manufacturing jobs left, so did the middle class and white Baltimoreans. Since the death of manufacturing in the city, the economy became a service-based one, and the incomes have dropped significantly.

Then there's the matter of America's disastrous War on Drugs. It is no secret that this misguided battle has resulted in skyrocketing incarceration rates across the country, the disproportionate majority being black males. America has spent more than $1 trillion on this war. In 2013, 1.5 million people were arrested on nonviolent drug charges, the vast majority of them for possession rather than distribution. Fifty-seven percent of these people were black or Latino, even though they use and sell drugs at similar rates as white people and make up minorities of the U.S. population.

In Baltimore, this war has hit the community hard. In 2013, for example, it was reported that Maryland had the fourth highest rate of arrest for marijuana possession, and the state spent over $100 million enforcing its possession laws in 2010. In Baltimore, black people were five times as likely to be arrested as whites. This reality was perhaps most famously depicted in the HBO television show “The Wire.” In response to the current strife in Baltimore, the creator of that series, David Simon, has said that the War on Drugs must end to turn this around. The entire quote is worth reading:

We end the drug war. I know I sound like a broken record, but we end the fucking drug war. The drug war gives everybody permission to do anything. It gives cops permission to stop anybody, to go in anyone’s pockets, to manufacture any lie when they get to district court. You sit in the district court in Baltimore and you hear, ‘Your Honor, he was walking out of the alley and I saw him lift up the glassine bag and tap it lightly.’ No fucking dope fiend in Baltimore has ever walked out of an alley displaying a glassine bag for all the world to see. But it keeps happening over and over in the Western District court. The drug war gives everybody permission. And if it were draconian and we were fixing anything that would be one thing, but it’s draconian and it's a disaster.

Beyond the disastrous drug war, and the adverse effects of deindustrialization, one must also look at the social history of Baltimore, and the major effects of a history of forced government segregation. In 1968, after riots broke out in Baltimore, as well as in Detroit, President Lyndon B. Johnson formed the Kerner Commission to investigate the underlying causes of the unrest and identify solutions going forward. The report warned famously that America was “moving toward two societies, one black, one white -- separate and unequal,” and that “segregation and poverty have created in the racial ghetto a destructive environment totally unknown to most white Americans.”

In 1910,  a residential segregation ordinance was introduced was introduced, meaning blacks were not allowed to live among whites in Baltimore, and were restricted to certain neighborhoods. In 1917, the Supreme Court struck down this law, which lead to the mayor instructing city building inspectors to cite code violations for anyone who rented or to blacks in white neighborhoods. At the same time, the Federal Housing Administration (FHA) barred African Americans from obtaining bank mortgages for home purchases -- not only for white neighborhoods, but for the black neighborhoods as well. This resulted in overcrowding in black neighborhoods and lesser rates of home ownership, which has lead to a domino effect of poverty and disenfranchisement in the black community that continues to this day. Contra Breitbart and Fox News, this historical racism is as American as it comes, and to say that it does not matter because forced segregation ended a half century ago is just plain ignorant.

What is going on in Baltimore is indeed a result of many factors -- and it is an American problem that we should all be discussing. But instead, the right wing is simply pointing fingers and acting as if this problem started a few years ago. But this problem did not start a few years ago. It is a result of many decades of racist policies and then many more decades of disastrous drug policies. Throw in the nationwide collapse of the working class, and politicians who embraced the capitalists over the workers, and this is what you get. And as long as capitalists continue to own more property than entire communities, and buy politicians to vote for their interests, riots may very well become a regular occurrence.