Super Hero Girls: My daughter wants comic stars that look like her -- and your son needs them, too

"Be a hero" vs. "I need a hero" — comics are still sending boys and girls different messages 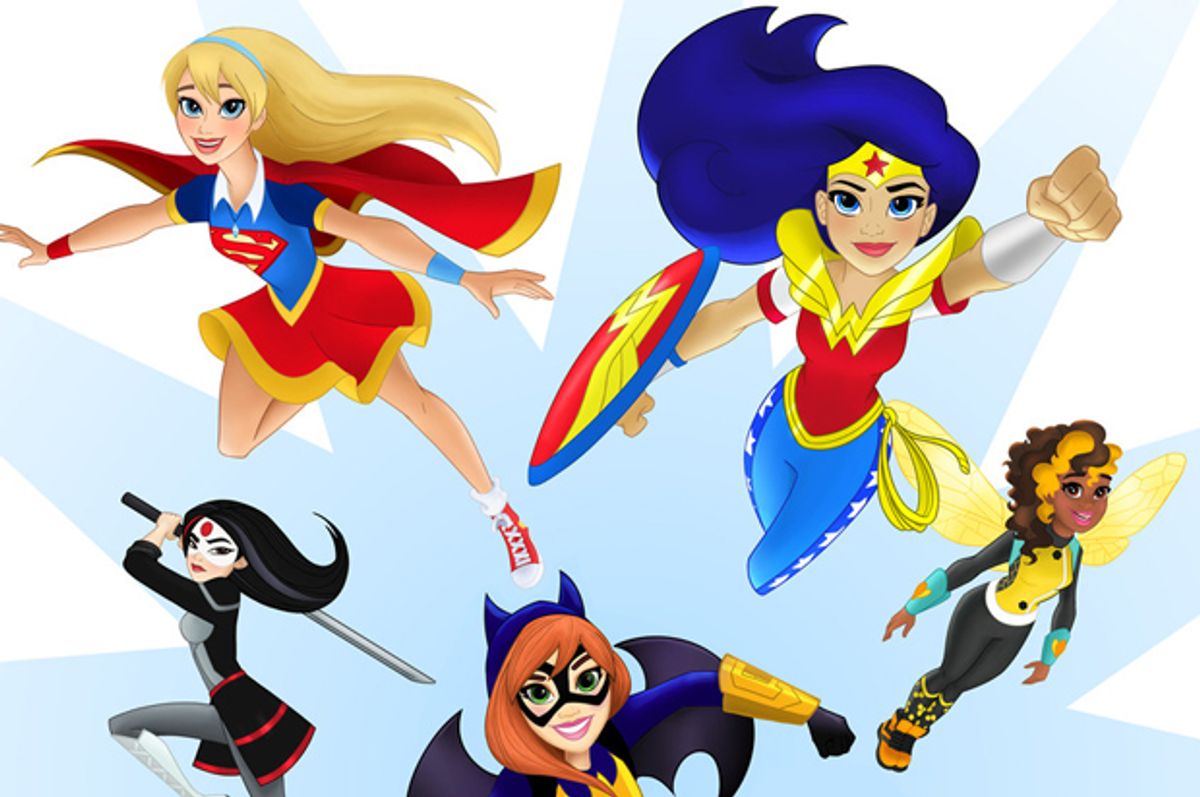 Last January, a friend of mine asked people to share a letter written by his daughter. Rowan, to DC comics, asking them to merchandise more products related to their female superheroes (especially Hawkgirl). She pointed out that DC had plenty of great female characters, but that they didn’t appear as toys or in movies. I asked Rowan’s dad, “How viral do you want this to go?”

With permission, I put it on my blog and tweeted it at some famous people. It took off. A few weeks later, Rowan was on the Today Show, DC sent her a custom portrait of Super Rowan and promised that more announcements about girl-oriented products would be coming soon. Now we know what they were planning – The Super Hero Girls.

Overall, I’m pleased. The aesthetic is athletic and non-sexualized. It fills a huge void, appealing to girls who want characters with whom they can identify. I’m the father of a six-year-old girl who likes nothing better than to grab a helmet, cape, Thor hammer, Hawkeye bow, and go fight bad-guys. She’s happy to play with toys associated with male heroes, but she does ask about the girls. I expect to be sending DC a lot of money on this new line.

Diane Nelson, President of DC Entertainment, proclaimed Hero Girls, “just for girls.” This exclusivity has sparked some debate about the consequences of segregating products by gender. They may be good products, but it’s revealing that DC is answering the call for better gender balance by creating girl-only products. Such characters provide role-models that otherwise were missing, but also perpetuate the assumption that boys can’t identify with girl heroes, and that truly co-ed teams of superheroes are impossible to market to kids.

Comics matter. They have become the dominant genre for depicting heroism in mass media. This dominance spills from Hollywood to television, toys, apparel, and more. When children imagine the heroic, they are influenced by the major brands like Marvel (owned by Disney) and DC. This puts a lot of pressure on these creators to get things right, and when it comes to gender, they mostly are doing a terrible job.

Every time a major movie involving super heroes comes out, fans ask – where are the female characters? Guardians of the Galaxy merchandising sparked a “where’s Gamora?” campaign. A producer of Big Hero 6 merchandise left the female characters off because, “Eeeww girls! Yuck! Haha.” Fans of the new Avengers: Age of Ultron movie are complaining that Black Widow rarely appears in the official licensed products. Irritated fans have coalesced online under the hashtags #WheresNatasha and #IncludeTheGirls. Even Mark Ruffalo (who plays Hulk) Tweeted, "@Marvel we need more #BlackWidow merchandise for my daughters and nieces. Pretty please."

Sometimes the sexism is overt. Both DC and Marvel have licensed products that suggest girls should be love interests, not heroes themselves. DC has shirts saying “I only date superheroes” and “training to the Batman’s girlfriend.” Marvel released a shirt showing four Avengers bursting out of the chest and likewise reading “I only date superheroes.” Marvel also released a product line in which a boys’ shirt said, “Be a Hero” and the girls’ reads, “I need a hero.” Let’s be clear, when my daughter goes outside to fight bad guys, she doesn’t need a hero. She is one.

The pattern is obvious – female characters from Disney (which owns Marvel) and DC are under-marketed. The few products exist in segregated “girls only” categories and often reflect sexist ideologies. What was unusual about the Big Hero 6 “Eeeww girls” comment was that the spokesperson said aloud what clearly most marketing executives are all thinking – add a single girl to a product, and boys just won’t buy it. Moreover, while the companies apologize for sexist products, they never seem to investigate the corporate structures that allowed such products to be created in the first place.

Meanwhile, Chris Evans (Captain America) and Jeremy Renner (Hawkeye) recently called Black Widow a “slut” and a “complete whore” for the fact that she might theoretically sleep with the male Avengers (even though the only character who sleeps around is Tony Stark/Iron Man). Evans apologized sincerely. Renner issued a non-apology apology, because, to Renner, Black Widow is just a fictional character, so who cares if she’s slut-shamed?

The answer, of course, should be everybody, because girls are paying attention. The very word “girl” is contested.  An image Search for the word “girls” reveals women in their underwear (boys, by contrast, shows appropriate images of boys). By centering powerful girls in ways that cut directly against typical mass-media portrayal, DC’s Hero Girls offers a new mould.

That said, there’s no reason to be content with just making segregated toys less objectionable. Renée Trilling, Rowan’s mom, wrote a comment to DC (shared with permission). She is excited to see DC bringing their pre-existing female characters “front and center,” adding, “These are the kinds of opportunities kids like Rowan have been waiting for--immersive content is exactly what they crave.” But then she added, “I also think that it's a great opportunity for Warner Bros, DC, Mattel, Random House, and LEGO to take the lead in showing that boys and girls don't have to inhabit totally separate worlds of play. I hope that a universe of super hero fun "just for girls" doesn't mean that these characters will be in all-female environments all the time, or that toy sets and storylines won't include both male and female characters. I'd hate to see DC create completely different playworlds for boys and girls that don't really interact in a meaningful way. This would reinforce the idea that female super heroes can't be role models for boys who want to build character and confidence, or that boy play and girl play are best experienced as separate, but equal.”

Write and cultural critic Mikki Kendall suggests that the specific nature of comics-related merchandising means that we don’t have to choose between segregated and integrated lines. Kendall wrote me that she’s generally happy with Hero Girls, though she wishes the line had a little more diversity in terms of “race and body type.” She adds, “The great thing about comics is that you can literally have products like Tiny Titans & Teen Titans in the same store and no one will bat an eye. The same is true here, have a co-ed universe & products, have one that centers girls, have one that centers heroes and villains of color, etc. There are markets for all of those options. And some people will buy merch from all of them.”

Superheroes live in fantasy worlds, sometimes dark and dystopian, sometimes transcendent and wonderful. But they are products of our all-too-real, generally patriarchal, society that pushes boys and girls into separate, unequal, gender roles. Hero Girls cuts directly against the grain. It’s a start. Next, let’s see if DC can actually get a Wonder Woman movie made. Then, maybe, they can try to imagine a world in which men and women, boys and girls, interact as equals.

That would be a comics universe worth celebrating.