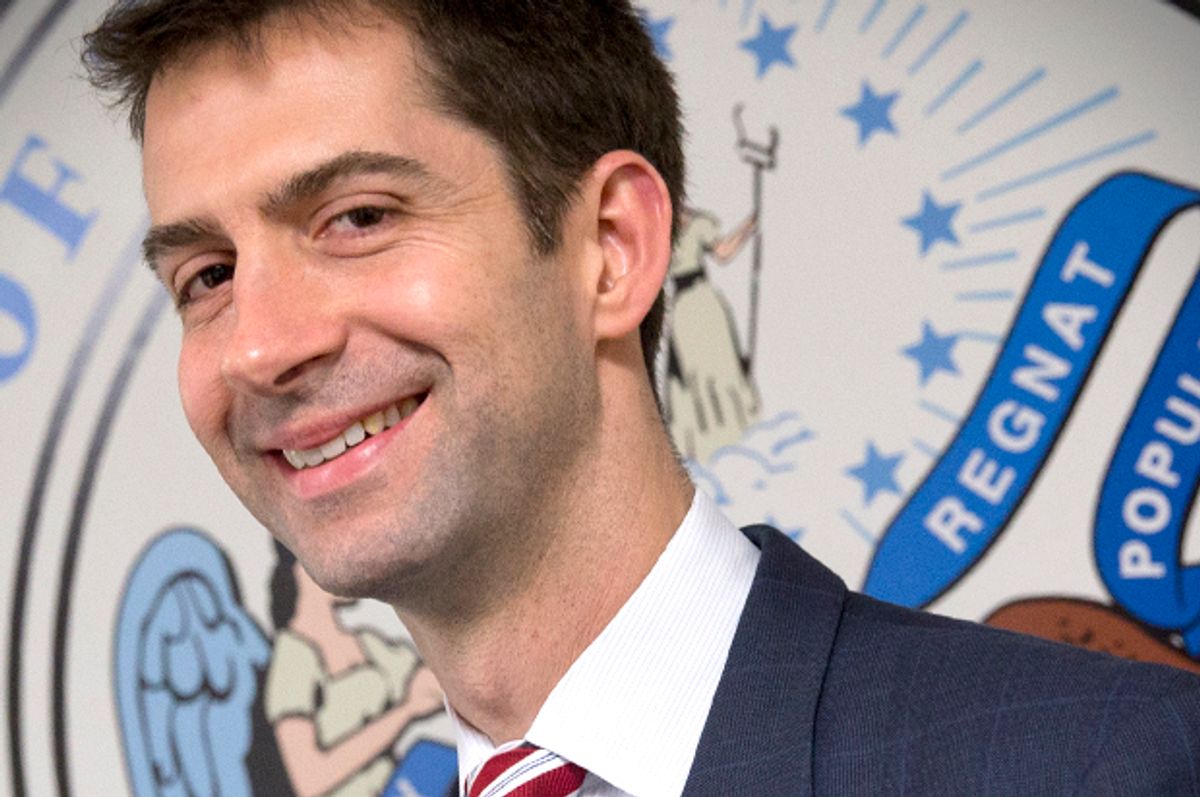 Sen. Tom Cotton, the freshman statesman from Arkansas, last seen on Twitter challenging the Iranian foreign minister to a debate over the Constitution, has defied Sen. Bob Corker's well-managed plan to get the Iranian review bill through the Senate. He and Sen. Marco Rubio -- whom you may have heard is running for president, and is firmly in the business of looking after Marco Rubio's interests -- used an aggressive parliamentary procedure to force votes on their "poison pill" amendments. Democrats were pissed off, and now the bill's future is uncertain. Majority Leader Mitch McConnell will take the weekend to consider how to proceed.

While I may call them "poison pills" because I am liberal terrorist from an irrelevant website, I'm not the only one using that term. Bob Corker himself is describing the amendments thrust forth by Rubio and Cotton as "poison pills." (Cotton calls them "vitamin pills.") The two amendments in question would "would make Iran relinquish its nuclear facilities before getting economic sanctions relief and require that Iran recognize Israel’s statehood as a condition of any nuclear deal."

Corker and Cotton were working with McConnell and Harry Reid on a plan to bring up a select number of Republican amendments, though not necessarily all ten billion, that were filed. A set of votes were scheduled for Thursday but that series "was unlikely to include Cotton and Rubio’s proposals and a frustrated Cotton instead forced the chamber to consider their proposals." Aww! They wouldn't let Cotton and Rubio have their votes right away. Clearly the only rational response is to shut down the entire process.

Now Democrats are pissed off and may block consideration of further dumb amendments, or just vote for them and allow the Obama administration to veto the bill if it ever gets that far. McConnell's best move, senators believe, is to cut off debate and get the bill ready for a final vote, and then ship it off to the House. But then would the Real Conservatives even vote for it, if they didn't get a chance to "strengthen" the bill with amendments requiring the Islamic Republican of Iran to collapse itself and make Dick Cheney dictator-for-life of the U.S. protectorate in Persia?

What the GOP had in the Corker-Cardin bill when it came out of committee was a compromise that, though hardly all that the deal-killers wanted, did at least force the Obama administration's hand into accepting it. If the bill were to pass as is, it would give Congress a long-shot chance to kill the would-be deal over Iran's nuclear program. If senators like Cotton and Rubio get their amendments into the bill, it would either get filibustered by Senate Democrats or meet President Obama's veto. Republicans would then go from having a distant chance of killing the deal to zero chance of killing the deal. (Until President Rubio pulls out of the deal on Day One of his presidency and ruins all of America's bilateral relationships, of course.)

Tom Cotton's various stunts have made him simultaneously the face of resistance to the deal and the figure most likely to ensure that President Obama gets to negotiate it without congressional interference. Savvy Republicans like Corker dupe Senate Democrats into working with Republicans, and then Tom Cotton comes along and sends all the Democrats scurrying. This is good for Cotton's ability to land high-profile speaking gigs at conservative conferences for the rest of his life, but not for his chances of ever making meaningful progress towards any of his legislative goals.