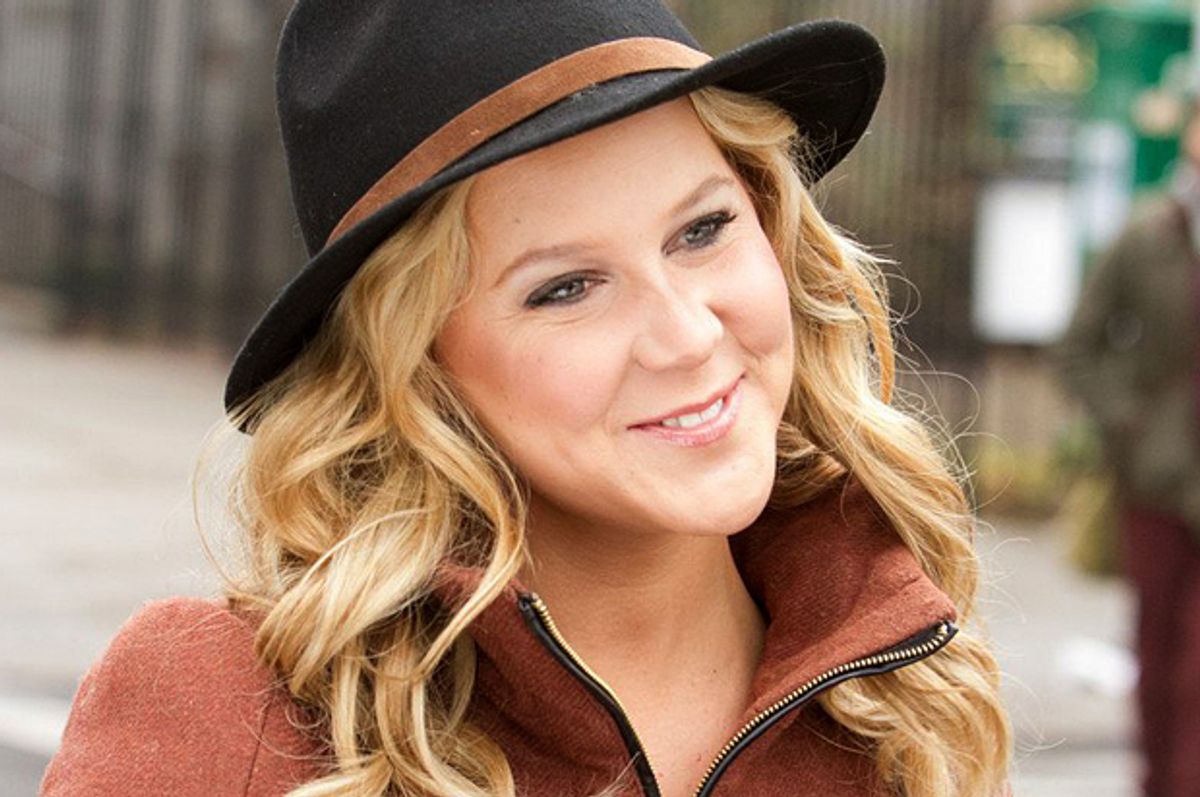 "Inside Amy Schumer" has been lauded for being one of the most outspokenly feminist shows on TV, one that uses comedy to highlight serious issues about body image pressures, gender stereotyping and sexual assault (as she put it at a recent Tribeca panel, "rape is good fodder for comedy because it's the worst thing in the world"). Here’s a look back at 15 times Schumer managed to tackle important topics in her inimitably sharp, fresh and funny way. Here’s to 15 more to come!

1. “Last Fuckable Day”
In this star-studded sketch from the Season 3 premiere, Schumer teams up with feminist icons Julia Louis-Dreyfus, Patricia Arquette and Tina Fey to celebrate Louis-Dreyfus’ “last fuckable day” — namely, the day when “the media decides when you're not believably fuckable anymore.” In turn, Schumer and co. brilliantly tackle the absurd and unfair Hollywood beauty standards that older actresses are subjected to.

2. “A Chick Who Can Hang”
This Season 2 sketch plays on the pervasive (and unattainable) ideal of the "Cool Girl,” and what an implausible male fantasy it represents. An example: One of the men in the sketch describes his ideal girl as “crazy hot; she could recite all of 'Boondock Saints' verbatim while rebuilding a deck.”

3. "Cool With it"
Schumer’s "Cool With It" sketch from this season similarly riffs on the Cool Girl trope -- a woman attempts to act comfortable with accompanying her male co-workers to a strip club -- before it flips into a surprising PSA about the wage gap. While our own Katie McDonough criticized the sketch's treatment of sex workers, the segment reflects Schumer's skill in highlighting the absurdity of culturally entrenched misogyny — in this case, unequal pay for women — by raising the stakes and spinning the narrative in a wacky and unexpected way. (The sketch isn't online, but you can watch the full episode here).

In this hard-hitting sketch dealing with rape in the military, Schumer creates a female avatar in a realistic military video game, and things turn dark quickly. As Callie Beusman writes at Jezebel:

"The sketch is great because [it] manages to do something so few other denizens of Comedy Central (cough, Daniel Tosh) have been capable of: it makes a rape joke that works — one that lampoons our bizarre, fucked up society for overlooking and tacitly condoning a sexual assault epidemic and not the victims of those assaults."

5. "Football Town Nights"
In a similar vein, this season’s sketch about rape in a high school football town perfectly skewers the social attitudes that lead to rape culture, while never blaming the victims.

6. "Compliments"
This much-discussed Season 1 sketch, in which women respond to compliments with extreme self-deprecation, has been lauded by many for its on-point commentary on the wider social pressure that forces women to constantly undervalue themselves, and to respond to praise with insecurity and self-effacement. As one of the women says in response to a compliment about her dye job: "No, I tried to look like Kate Hudson, and ended up looking like a golden retriever's dingleberry."

8. “Lunch at O’Nutters”
Schumer is great at turning gender roles on their heads — like in this reimagined Hooters aimed at women, called O’Nutters, which features male servers in tight bodysuits, skinny-girl white zin spritzers and plenty of talk about feelings.

9. “Sex Prep”
In this Season 2 sketch, Schumer shows the effort that goes into getting ready for a sex date, and in the process, lampoons the ridiculous beauty standards depicted in the media. Schumer is confronted with a series of defeating magazine stories with titles like "Hair Down There? Kill Yourself” and "Is Your Pussy Too Loose to Hang Onto the Perfect Guy?”

10. “Sex Tips”
The expectations engineered by women’s magazines are also the subject of “Sex Tips,” which shows editors at a Cosmo-esque magazine dreaming up bizarre new ways to please men, such as “take a four-hour energy and pour it inside your vagina right before you have sex.”

11. “Focus Group”
Schumer turns to the cultural preoccupation with women’s appearances in the entertainment industry when she conducts a focus group to get feedback about the first season of the show, and it devolves into a bunch of guys objectifying her based on the way she looks.

12. “Gang Bang”
One of the series' more complex sketches features Schumer throwing a “feminist” gang bang to prove that women aren’t objects, after which she quickly gets called out for wanting to be objectified (as one of the men says, “don’t you find it a little un-feminist that you want to have sex with me just because I’m not that into it?”). The sketch addresses contradictory expectations facing feminists today, as well as the criticisms a woman faces when she attempts to exercise her sexual autonomy in the same ways that men do.

13. “Operation Enduring Mouth”
This spy film parody, in which Schumer plays a character code-named "Butter Face" charged with luring a suspect with a blow job, is all-too reminiscent of how female characters are sidelined or reduced to sex objects in Hollywood action films.

14. “Girl, You Don’t Need Makeup”
In this One Direction-esque boy-band parody, Schumer destroys the dumb, hypocritical trend of male musicians praising women for their “natural beauty” in an industry (nay, a world) known for its unattainable beauty standards.

15. "Love Tub"
We may not need Schumer to remind us how misogynistic and insane "The Bachelor" is, but as usual, her take on the show -- which results in the winning girl being escorted into a "love tub" -- is delightfully refreshing.