Where Freddie Gray grew up, one in four juveniles is arrested and the unemployment rate is 58 percent 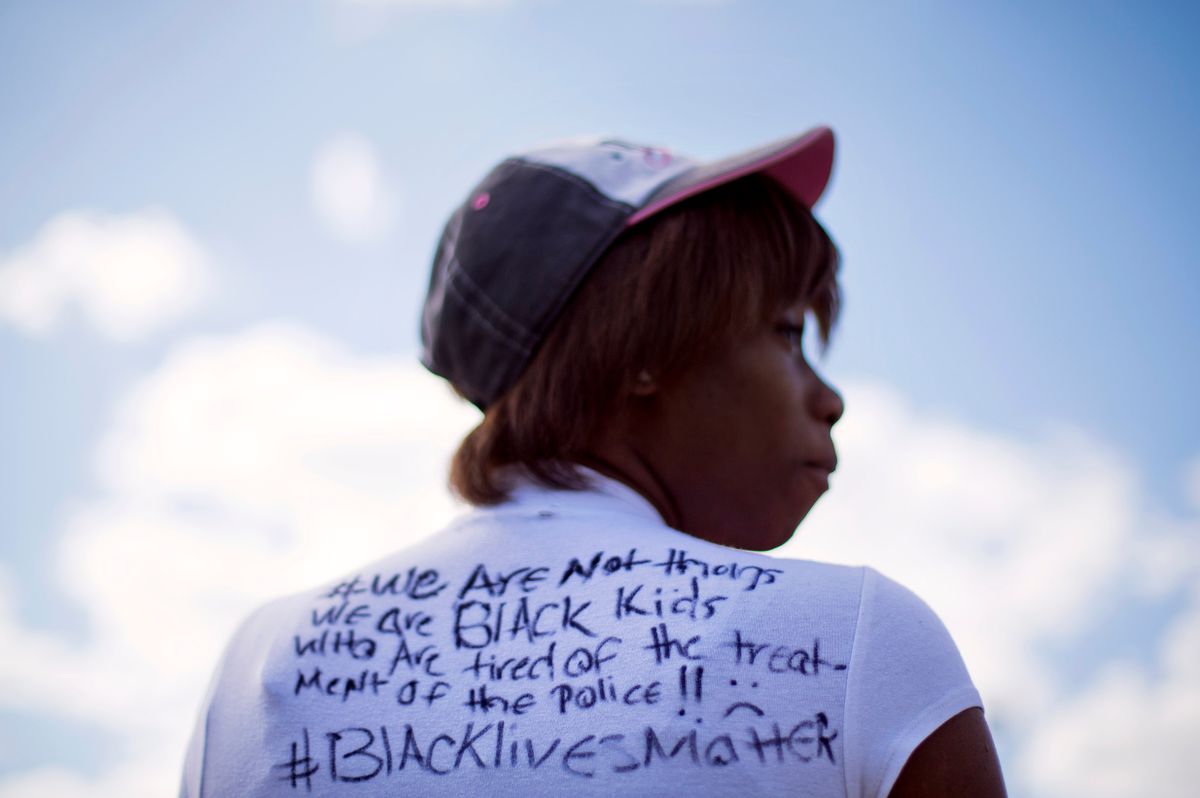 Alize LeGrange, 18, wears a T-shirt she made in response to Baltimore Mayor Stephanie Rawlings-Blake's comments about "thugs" trying to tear down the city as she waits for a bus at the Mondawmin Metro Station (AP Photo/David Goldman)
--

Across the street from Baltimore’s Mondawmin Mall, where violent protests erupted last Monday afternoon, stands Frederick Douglass High School. It was from that school that students emerged at 3 p.m., only to find themselves in the crosshairs of the police. The school is named after the famed abolitionist who spent 10 years a slave in Baltimore. Anyone familiar with Douglass’ most famous work—"Narrative of the Life of Frederick Douglass, An American Slave, Written by Himself"—cannot but feel a bitter irony in that juxtaposition of Douglass High and the riots of the past week. For once upon a time, Baltimore offered Douglass a glimpse of freedom, which “laid the foundation and opened the gateway, to all my subsequent prosperity.”

Douglass was born a slave on the Eastern Shore of rural Maryland.  While Americans often look to the countryside for escape or rebirth—think of Thoreau’s meditative retreat to Walden or the pioneers farming their own land on the frontier—Douglass saw something more sinister there. On the Eastern Shore, the slave was denied any sense of personal or historical time; Douglass didn’t know his birthday or his age and was forbidden to ask about it. The only time the slave knew was that of a farm animal—“planting-time, harvest-time, cherry-time, or fall-time”—the rhythms of nature and forced labor dictating each and every moment of his life.

Douglass’ father was white and rumored to be his owner, presenting Douglass with a terrible confusion of biology, property and tyranny: “The slaveholder, in cases not a few, sustains to his slave the double relation of master and father.” The countryside, in short, was not a place of pastoral ease or natural innocence. It was a political site of great coercion and cruelty.

When Douglass was about 8, he was sent to Baltimore, where he lived for seven or eight years. He was sent there again in his 20s, and it was from there that he escaped to the North. Though always a slave in Baltimore, Douglass discovered in the city a freer existence. There was better food, better clothes and “privileges altogether unknown to the slave on the plantation” such as roaming the city on his own. It wasn’t that urban slaveholders were kinder human beings: They were, after all, slaveholders, and Douglass’ new master, who had never held slaves, became more vicious with time. It was that the city imposed a regime of “shame” on the slaveholders that was absent in the countryside.

Living in close proximity to his neighbors, many of whom did not own slaves, the master was restrained by the watchful eye of urban society. In the countryside, the master was shielded from scrutiny by vast tracts of land and space. The density of the city helped “curb and check those outbreaks of atrocious cruelty so commonly enacted upon the plantation.” There were exceptions to this rule. Even so, Douglass believed that “he is a desperate slaveholder, who will shock the humanity of his non-slaveholding neighbors with the cries of his lacerated slave. Few are willing to incur the odium attaching to the reputation of being a cruel master.”

In Baltimore, Douglass also discovered the possibility of cross-racial alliances. Anxious to learn how to read, he befriended a group of poor white boys whom he “converted into teachers.” Partly out of solidarity, partly out of self-interest (Douglass gave the boys bread, which was always available to him in his master’s house), the boys taught him how to read. More important, they empathized with him and his plight:

I used to talk this matter of slavery over with them. I would sometimes say to them, I wish I could be as free as they would be when they got to be men. “You will be free as soon as you are twenty-one, but I am a slave for life! Have not I as good a right to be free as you have?” These words used to trouble them; they would express for me the liveliest sympathy, and console me with the hope that something would occur by which I might be free.

Baltimore was also a port city, where racial classifications and borders could get blurry. Known as America’s “Black Capital” (Baltimore at the time had the largest black population in the U.S.), the majority of black Baltimore was free. As was true of several other port cities in the Americas—New Orleans or Callao, the port city west of Lima in Peru—free men of color labored alongside black slaves, white men and immigrant workers from across the globe. Douglass labored alongside all three groups as well, often with great tension, sometimes with grudging appreciation. From two Irish dockworkers, Douglass derived a resolve to escape to the North. “They both advised me to run away to the north; that I should find friends there, and that I should be free….I nevertheless remembered their advice, and from that time I resolved to run away.”

There was, in short, something about the city itself, with its forcible confrontation of difference, that made a difference. Especially in the life of this black slave: “A city slave is almost a freeman, compared with a slave on the plantation.”

Historical comparison, across the divide of two centuries, is a risky business. But it’s hard not to reread Douglass’ "Narrative" against the grain of this week’s events in Baltimore and the decades of urban poverty and police brutality that preceded them. Though urban life has experienced a revival across the U.S. in recent years, that revival is premised not on a mixing of racial and economic categories, a meeting of different peoples and nations of the sort described by Douglass, but instead on a grim machine of racial absolutism and economic separation.

Even more jarring is Douglass’ contrast between the coercion of the countryside and the relative (I stress that word) freedom of the city. So tyrannical was the regime of the plantation and its satellites that Douglass resorted to the most political of metaphors to describe it. The plantation is “the seat of government for the whole twenty farms” surrounding it.

Today’s city—if you’re working class or of color—is also policed heavily. But where the plantation’s police—the overseer, the slave patrols—did their damnedest to wrest every last ounce of labor from the slave, today’s police keep watch over the unemployed or semi-employed. In the West Baltimore neighborhood where Freddie Gray—whose death while in police custody sparked the riots—grew up, one in four juveniles is arrested and the unemployment rate is 58 percent. The plantation’s police extracted labor; the city’s police preside over its disposal.

As Alex Gourevitch shows in an article in Perspectives on Politics due out this fall, urban police departments are a relatively new phenomenon. Throughout much of European and early American history, men and women were policed by their lords, owners or employers. But with the abolition of feudalism, slavery and other systems of bonded labor, some of that policing function was assumed by the state, especially in cities, where newly freed workers tended to migrate. In fact, most urban police departments in the U.S. were created in the second half of the 19th century. Their targets were, overwhelmingly, these workers, often operating at the margins of the economy. (With time, their targets became striking workers, operating at the very centers of capitalist production.)

Like all great texts, Douglass’ narrative is great in part because his account is so much his own; one looks to it not as an accurate representation of the age but as a comment on it. Still, I can’t help but see in his story of Baltimore past a glimpse or moments of an alternative Baltimore future. That this is an urban future conjured and cobbled together out of a slave’s past is a historical irony I am only too aware of.