Ayaan Hirsi Ali is dangerous: Why we must reject her hateful worldview 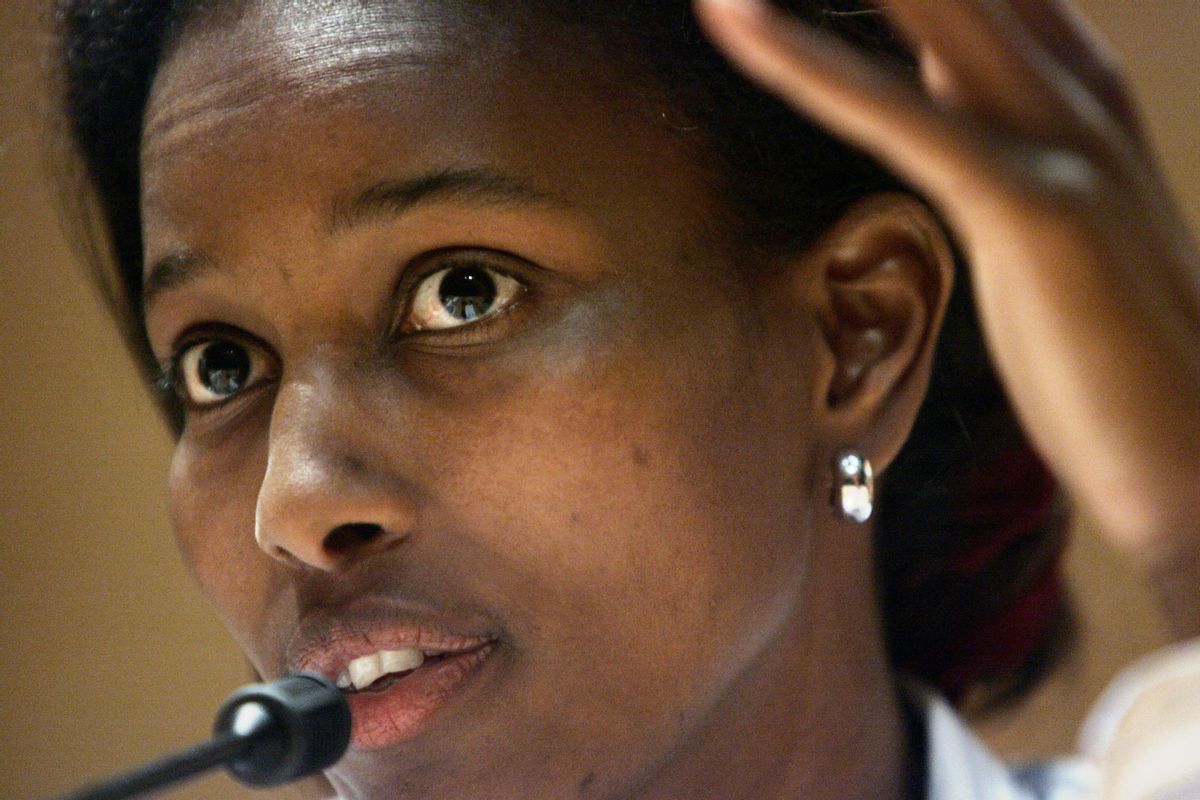 She grew up in Saudi Arabia. I grew up in Jerusalem. Today, we both live in America.

Ayaan Hirsi Ali has been back on American television lately, mounting scathing attacks on Islam as she promotes her newest book. Her outbursts are the outcome of her own pain — the brutal physical scars inflicted on her body during childhood, justified by an intolerant radical version of the religion into which she was born. Having suffered abuse at the hands of those who embraced the literalist, monolithic view of the Saudi Wahhabi tradition of Islamic law, her writings are suffused with an abiding rage at the beliefs of her tormentors. But in the process, she concedes to them the very monopoly over narrating Islam’s truth upon which they insist, whether in the form of the violent ideology of groups such as ISIS or of the official authoritarian intolerance of Saudi Arabia.

It is my own, very different experience of Islam that compels me to challenge Hirsi Ali's work.

As a Muslim woman married to a Jew and the mother of a Catholic daughter, I have lived in Jerusalem, Cairo, Rome and New York, and I am a regular visitor to other Muslim countries. What I have seen, particularly after the 9/11 attacks, was a broad rejection, not only of the extremism of Al-Qaeda but also of the authoritarian violence of Western-backed secular dictators — who, by stripping Muslims of their constitutional rights, jailing and torturing them, accomplished only the mass radicalization of young Muslims.

My father, a guard at al-Aqsa mosque in Jerusalem, believed, like most of the world’s one billion Muslims, that Sharia is not fixed and monolithic, but always in flux, its core principles -- such as preserving life, faith, intelligence, family and property -- remaining sacrosanct, but requiring translation into more flexible rules to match our lives in a changing world.

He believed that context and interpretation matter when reading the Quran and the Hadiths, and that interpretations had changed along with centuries of social change. Context mattered since the early days of Islam. We always, for more than a millennium, understood text in context. We have 1,400 years of inherent pluralism within Islam to testify to that diversity within our religion.

But Saudi Arabia and its state religion, Wahhabism, sought to stamp out the Islamic renaissance of the Golden Ages (under the Abbasids and then the Ottomans), enforcing instead a puritanical, literalist interpretation that codified violence against women and intolerance of other faiths. That is the tradition into which the Somali-born Hirsi Ali was raised in Saudi Arabia, Ethiopia and Kenya. It is this tradition that serves as the theological basis for the ideology of nearly every jihadist group from Al-Qaeda to ISIS.

That’s the Islam that Hirsi Ali knows, but she conflates it with the beliefs of a billion Muslims who see the violence she and many other women have suffered as an abominable violation of Islamic tenets. Worse, she has called for a war on Islam and Muslims, a war to be led by the West. American elites hailing Hirsi Ali as a savior of freedom and reform do not understand the fire with which they are playing. To endorse Hirsi Ali so unabashedly is to insult and mock a billion Muslims. She backs Western invasions of Muslim countries in the name of freeing their women, yet it is those women who have suffered most as a result of those wars, which have mostly set back the real struggles of Muslim women to expand their rights.

And so America’s talk-show culture risks creating a dangerous narrative in which the only Muslim voices heeded are, in fact, ex-Muslims, and anti-Muslims.

Reviving a pluralist, compassionate Islam depends on an internal conversation amongst Muslims, from whom Hirsi Ali has famously severed herself by insulting the Quran and the Prophet, and supporting military interventions in the Muslim world. She is not known to most Arabs and Muslims, and where she is known, she is thoroughly discredited in the eyes of those she claims to be seeking to liberate.

You can’t count yourself among those working to reform Islam when you openly argue that the only way to reform Islam is to “crush” it. That message may resonate with Islamophobic audiences in the West, but it simply underscores her alienation from — indeed, her antagonism towards — those actually involved in a struggle to reform Islam and fight violent extremism. We cannot fight jihadists while embracing views as intolerant and inflexible as theirs, or make common cause with monarchs who share the religious outlook of the jihadists. Hirsi Ali actually plays a destructive role by reinforcing a belief among young Muslims that the hatred of Islam has been normalized in the West -- a sentiment that further fuels radicalization.

Sheikh Rachid al-Ghannouchi, the leader of Tunisia’s Al-Nahda party; The Mauritanian-born Saudi-based cleric Abdallah Bin Bayyah; Iraq’s preeminent Shia jurist, Ayatollah Ali al-Sistani: These are leaders who command hundreds of millions of Muslims, and who are challenging radicalism and the jihadist criminals who have hijacked our faith. They use the vibrant tradition of Ijtihad (or jurisprudential reasoning) and free thought to undermine jihadist arguments and stand up for representative democracy.

Only Muslims can shape what is normative in Islam. Which is why the conversation among those looking to negotiate a new future for Islam in the shadow of violence from tyrants and terrorists is far more important - and meaningful - than the shrill grandstanding of Hirsi Ali.

To the extent that American elites are mesmerized by Hirsi Ali's message, they are choosing to embrace the "war of civilizations," a self-fulfilling prophesy that has claimed hundreds of thousands of lives over the past decade, and promises only more war and chaos. It’s time to listen to what is being said by the Muslim voices of peace and tolerance. Ayaan Hirsi Ali is not one of them.

Rula Jebreal is an author and foreign policy analyst.