It's been a long, hard-fought road for the women leaders of SC&P 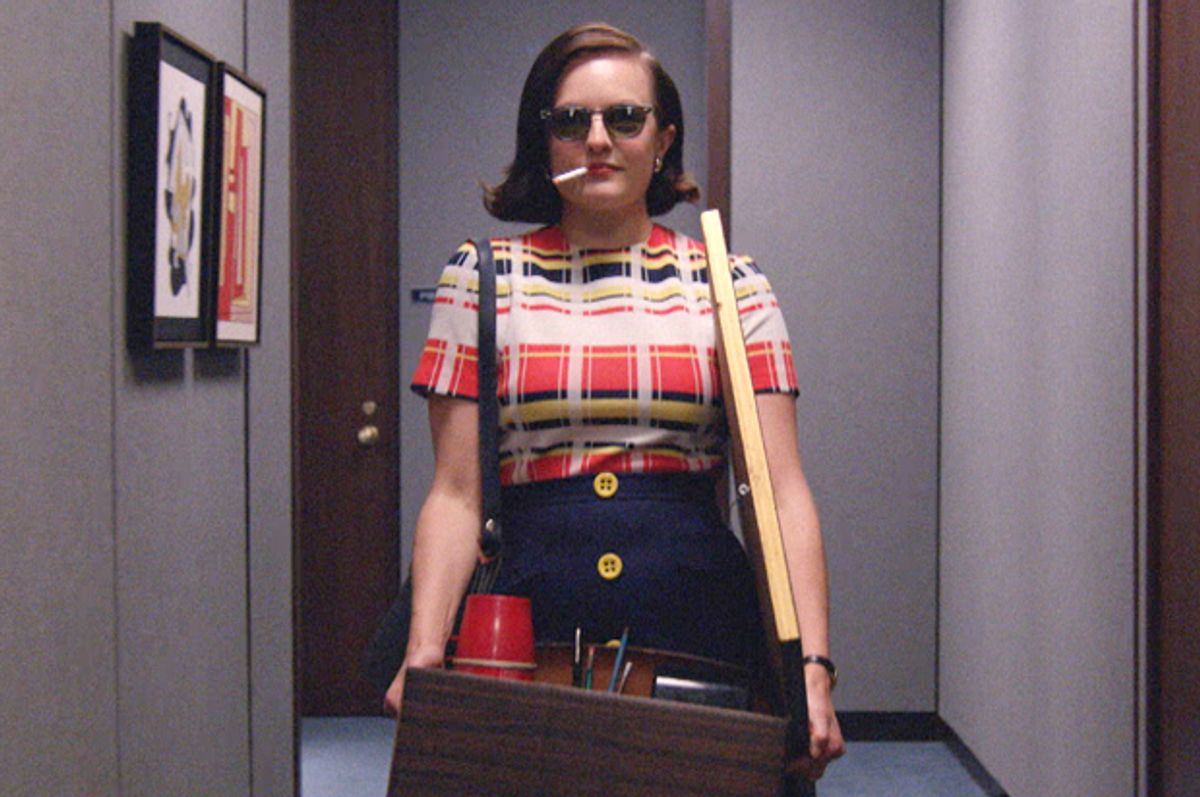 As we all know from the inordinate amount of time this season has spent chasing after Di the waitress, Matthew Weiner doesn’t always give fans what they want. Last night, too was full of fake-outs and teases — like when Don came to pick Sally up for a leisurely father-daughter ride to boarding school, and then we found out she had “already gotten a ride.” On behalf of all the Sally fans, let me just say this was not a cool move, Weiner.

But in many ways, this episode was also one of the most fan-servicey so far, giving two of the show’s most beloved female characters the moments of glory they have long deserved. As our own Sonia Sariya wrote in her recap, it was a “fist-pumping, couch-yelling, joyous-whooping episode”— both in terms of Joan confronting head-on the sexism that has dogged her all her working life life, and in Peggy strutting through the halls of her new office like a goddamn force to be reckoned with. (I won’t even get into the newly-scholarly Betty reading Freud at the kitchen table, but that was pretty cool too).

Weiner has always been concerned with depicting the barriers and injustices that women of the era faced in their personal and professional lives. As he has said multiple times in interviews, one of the first lines he ever wrote for the show was “I’m not gonna let a woman talk to me like that.” Ten years later, "Lost Horizon" shows both how little and how much has changed in a decade. Our leading ladies still face incredible impediments to their success, but they are both much better equipped to fight back, and to reshape their futures in their own very different -- but equally powerful -- images.

Throughout the series, Joan has born the brunt of the vile, sexist tendencies of the men around her — from being raped by her husband to being forced to sleep with the gross Jaguar exec — and last night, she is finally pushed to her limit by the unenlightened pigs of McCann Erickson. While Don is being vaunted like the gilded white whale that he is, things aren’t going so well for Joan. The respect she worked hard to earn at SC&P has all-but evaporated as the slimy Dennis, then the even slimier Ferg, treat her as an object to be exploited for their enjoyment. As Ferg puts it: “Look, I know a good job when I see one. Hey, I’m easy, I’m not expecting anything other than a good time. I mean, I want to get to know you, of course.”

We've seen Joan suffer through these sorts of indignities time and time again, but this time, it's the last straw. Prompted by her new boyfriend Richard, Joan confronts McCann head honcho Jim Hobart in the office, and their showdown is a jubilant moment for fans. Finally, in no uncertain terms, we see Joan spit out the bitter pill that she has been forced to swallow all these years. As she puts it: “I wonder how many women around here would like to speak to a lawyer. I think the Equal Employment Opportunity Commission has one. I think the second I file a complaint I’ll have the ACLU in my office, and Betty Friedan in the lobby with half the women who marched down Fifth Avenue. I guess you didn’t see the headlines about what happened at Ladies Home Journal or Newsweek.”

This is a huge moment, both for Joan and for the viewers who have watched her evolve. While the show certainly has the feminist movement of the '60s and '70s woven into its DNA, its rare that we’ve seen the political terms of the struggle laid out in such clear terms, especially by Joan, who usually takes a more sideways route (although, as Alyssa Rosenberg at the Washington Post wrote a few weeks ago, Joan's feminism has become increasingly radical over time). For her to come out guns blazing like this was a moment of glorious catharsis, one that shows the strides that both she and society have made in terms of knowing when to say "enough is enough." As Saraiya writes:

"She is backed into a corner, so she plays the only card left to her—a card she never would have played at any time before this one—the gender card, one that only is available to her because of the enormous shifts in thinking over the last decade. She invokes Betty Friedan, who published “The Feminine Mystique” in 1963, and the Equal Employment Opportunity Commission, which took its charter from Title VII of the Civil Rights Act of 1964. Joan Holloway of 1960 has become Joan Harris of 1970, which has required a lot of internal change. But Joan Harris has much, much more at her disposal than her former self did. Hobart isn’t completely cowed, but he’s forced to reckon with her, and that is making the mountain come to her, instead of the other way around."

Of course, "Lost Horizon" isn't a happy ending for Joan. After a seething Hobart kicks her out, Joan -- prompted by Roger to take the money and run -- takes her fifty cents on the dollar and her rolodex and doesn't look back. After everything she's been through, seeing Joan get pushed out of the house she helped build is a infuriating, defeating, maddening, devastating conclusion. Weiner has never been one for falsely-optimistic happy endings, and it's unfortunately all too realistic that even an unstoppable force like Joan would be no match for the crushing weight of institutionalized misogyny. Yet in spite of it all, this confrontation still felt like a victory for fans; we finally heard Joan's voice loud and clear, and when she spoke, she spoke for all of us.

Meanwhile, over in the empty shell of the SC&P offices, Peggy waits alone, haunting the halls like a specter out of some Don Draper highway hallucination. She, too, has been left in the lurch by McCann-Erickson — they forgot to give her an office, and then they sent her a bouquet of flowers along with the secretaries (um, thanks, but no thanks). But when she runs into Roger, playing the organ -- which SC&P has, apparently? -- and the two embark on some drunk rollerskating shenanigans, it’s a thing of heart-swelling beauty for “Mad Men” fans: Two fan-favorites who rarely cross paths paying joint tribute to the creative, anarchic spirit of SC&P. Ghost Bert Cooper would be so proud.

When she struts into the McCann offices the next day, shades on, ciggy dangling, tentacle porn painting under her arm, it's an indelible image of her evolution so far: The jubilant, fuck-yeah-Peggy-Olson moment that fans have been waiting for. The Peggy of ten years ago — a meek secretary with an improbable dream — has morphed into the creative lifeblood of her agency and the most striking emblem of its future. As John Teti writes at the AV Club, “The Peggy of a few days ago, the deferential supplicant with a flower basket meant for a secretary, is nowhere to be found. Instead, we have Peggy’s latest, boldest revision of herself…. her days of making men feel at ease are over. If the idea of Sterling Cooper was to be something greater than 'advertising,' Peggy intends to carry that ethos forward. The agency, in more than one sense of the word, lives on through her.”

In the words of one of the many fans who quickly co-opted the strutting-Peggy image into a meme, with some help from Drake: ”Started from the bottom now we here.” While Don’s trajectory may be driving around the middle of the country in circles — or, you know, jumping out a window (!?) -- for Peggy, it seems like the only place to go is up.

I’ll let the good people of the internet sum up the rest: