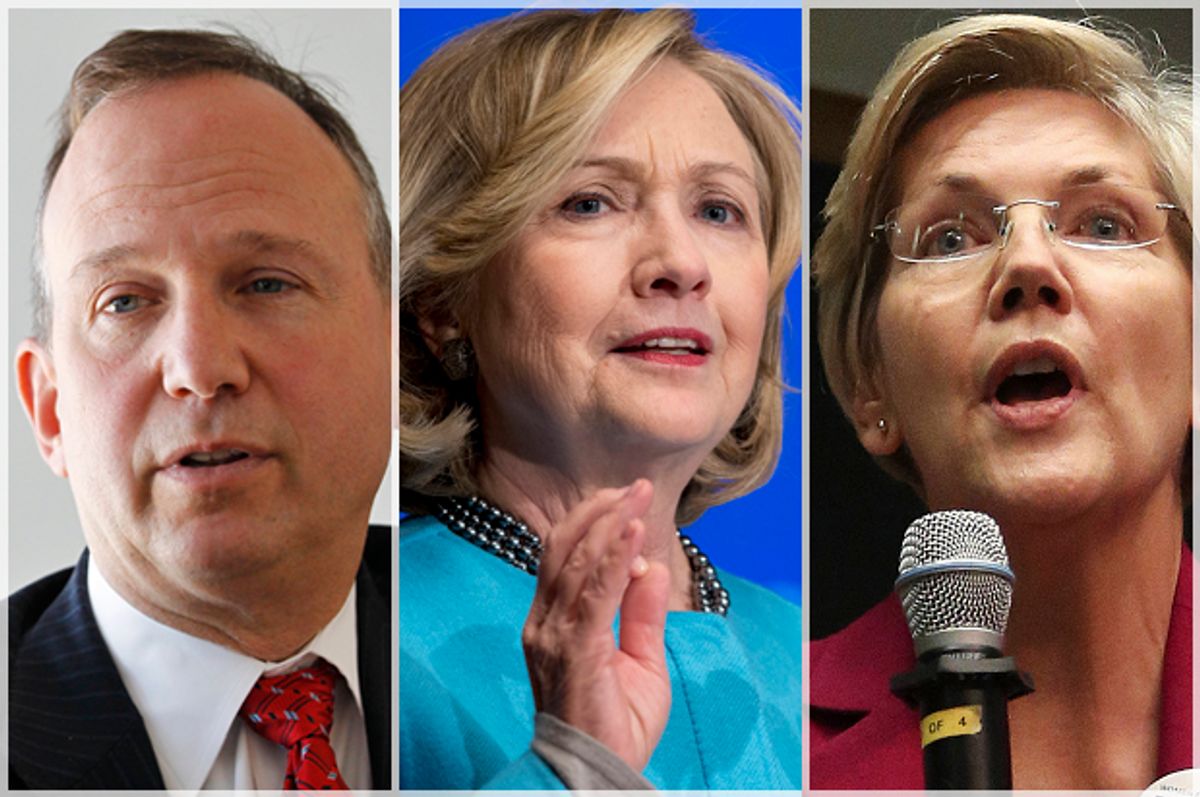 Let’s pretend that the evidentiary ground for the media’s “Hillary Clinton vs. the left” narrative is stronger than it actually is, and let’s stipulate that the former secretary of state has to convince liberals that, like the overall party, she’s moved on from the ‘90s and the era of the DLC. In that scenario, the challenge facing 2016’s current frontrunner is the rather simple one of how best to do it. A timely speech on mass incarceration was a good start. What comes next?

I recently argued that Clinton would do well to come out against the fast-track option for the Trans-Pacific Partnership trade agreement. Others would likely recommend she endorse a financial transaction tax or some other policy shibboleth to prove her recent gestures in the direction of criticizing Wall Street are more than just talk. However, if Clinton is looking for a more overarching principle to guide her through the campaign — something she can rely on no matter the specific issue of the day  — my advice would be straightforward: Do everything you can to ensure you never sound like Delaware Gov. Jack Markell.

As recently as three days ago, this would not have been my advice. Markell’s is not exactly a top-tier name. But over the weekend, for reasons unknown, the Atlantic decided to publish an essay by the governor of the self-described “First State” — and, my God, is it terrible. Titled “Americans Need Jobs, Not Populism,” the essay resides awkwardly in-between a stump speech and a TED presentation. It is long, boring, smug and tendentious; and with its neoliberal cant and genuflecting to plutocrats, it is everything the post-Obama Democratic Party should not be.

The irony, of course, is that Markell’s piece (and, indeed, his whole career trajectory) is a testament to the towering legacy of Bill Clinton, the former Democratic president credited with hastening his party’s embrace of neoliberalism (a.k.a., the “third way”). Most of the hallmarks of the self-conscious centrism that helped Clinton become the first Dem to win two White House terms since Franklin Delano Roosevelt are present. There’s the fawning over business, the disdain for politics, the soft spot for Wall Street and the fetishization of the free market. It would be run of the mill stuff for a Democratic politician — in, like, 1998.

For example: Markell, following in Clinton’s footsteps, describes himself in the essay as a pragmatist with little interest in partisanship or ideology.  After the crash of 2008, he writes, “I could have railed against the CEOs of Chrysler, GM, and Valero for pocketing bloated salaries while handing out pink slips.” He could have “said that the economic system is rigged, with the deck stacked against the middle class.” But he didn’t. Not because he wanted those people (whose ilk he knew well from his time in business school and as a banker and consultant) to keep donating to his campaign, though. But because the “real problem doesn’t fit on a placard.”

With the disdain for mass politics that is so characteristic of neoliberalism, Markell writes that the “real problem” exposed by the ‘08 crash and the ensuing Great Recession wasn’t one that “lead[s] people to protest or ‘occupy’ an industry.” It wouldn’t lend itself to “ready made solutions” or the kind of policies that inspire “full-throated cheers.” Contrary to what Sen. Elizabeth Warren may say, Markell explains that the obstacle was not (and is not) an “economic system” that is “fundamentally rigged.” No, the issue, Markell assures us, is “globalization” and “technology.” In the matter of what caused the human-made economy to collapse, Markell says, no humans are to blame.

Markell continues to babble on for another 2,000-plus words; but for anyone who’s studied neoliberal rhetoric, the remainder of the essay is no less familiar — or tedious. Markell argues that what American workers need is a politician who can “speak the language of business” and understands “the synergy … between economic growth and economic justice.” The straw man he’s too gutless to tackle head-first here is the same one Clinton liked to thwack in the ‘90s when he described himself as a “new” kind of Democrat: the lefty who wants to sacrifice growth in the name of equality. Never mind that this dichotomy is one leading economists are coming to increasingly reject; the reason Markell can’t name any Democrats who’d argue otherwise is because they don’t exist.

Similarly, while Markell attacks a kind of no-growth liberalism that hasn’t been relevant since the 1970s, he also praises an egalitarian, civic-minded business community that is just as much of a fantasy. Because the U.S. has a consumer economy, which requires a large population with expendable income, it’s vital that the benefits of growth to do not all accrue to the already-wealthy, Markell writes. And business, he says, gets this. Why else would business “icons” place that dynamic “into their own business models”? “American auto pioneers insisted on paying a wage that allowed their own employees to purchase what they manufactured and assembled,” he notes. He neglects to mention that Henry Ford — who famously paid his workers a high wage, and then unleashed violent thugs upon them if they tried to unionize — died in 1947.

But of all the essay’s many half-truths and sophistry (I’m not even getting into Markell’s risibly shallow defense of TPP), the moment that best embodies why Hillary Clinton should sprint the other way comes at the end. “Long-term success requires an active government that partners with business to ensure that the bounty of economic growth is shared broadly,” Markell writes, sounding like the McKinsey man he once was. But please don’t mistake him for someone who believes in economic justice, despite his earlier argument that it could only be achieved through economic growth. Redistribution, he writes, “is not about having a ‘bleeding heart.’ It’s a matter of cold economic sense.” It’s hard to imagine how a supposed defense of the American worker could be more apologetic.

Back in the 1990s, when three of the previous four presidents were Republican (with Carter only barely winning, despite the advantage of Watergate) Bill Clinton’s approach was arguably necessary. The country was in its most reactionary mood since the 1920s; and the landslide election of George H.W. Bush, who was not exactly Reagan in the charisma department, signaled to many Democrats that something about the party was profoundly amiss. But in spite of what Markell’s piece may lead one to think, 2016 will not be a repeat of 1996. Politically, socially, and demographically, the country’s too different; and while things are better than they were in 2009, few Americans would argue that happy days are here again.

So if Hillary Clinton wants to win the White House next year, it’s imperative that she ignore Markell and keep in mind that 20 years can make a hell of a difference. If she doesn’t, and tries to shove the Democratic Party back into the ‘90s mold, it won’t matter what she says about any number of specific policy questions. And it won't matter how many nice blurbs she writes about Sen. Elizabeth Warren. The kind of obsequiousness to the 1 percent that oozes from Markell’s essay won’t just piss off liberals; it will be the death of her campaign.