"Game of Thrones" politics: When the faithful become militant, the crown can lose control

As Cersei and Stannis use religion for political ends, parallels between Westeros and the Holy Roman Empire emerge 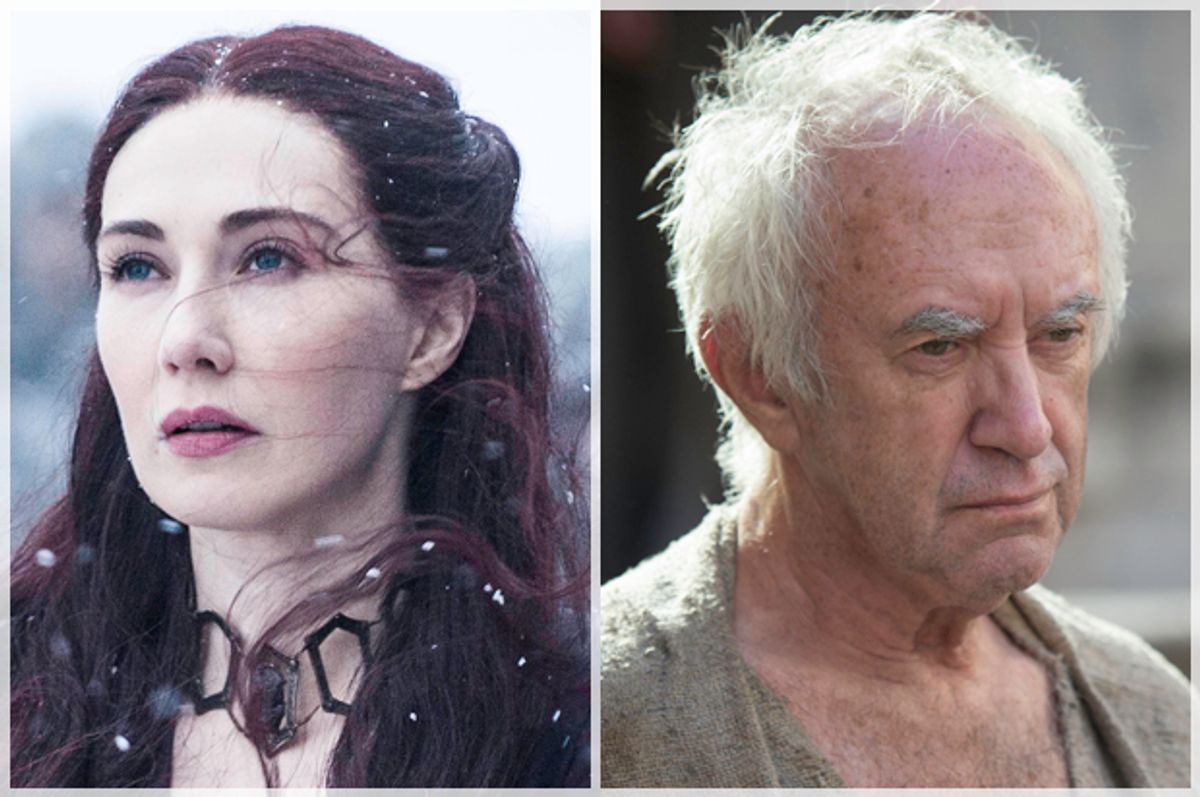 In “The Sons of the Harpy,” the actual Sons don’t take to the screen until the last five minutes of the episode – although their brief appearance has a tremendous impact. What comes to the fore instead is the theme of the power of faith, in conflict or collaboration with the state. And this theme reflected in two opposing models: the relationship between the Iron Throne and the recently-emerged High Sparrow, and the relationship between Stannis Baratheon and Melisandre, Red Priestess of R’hllor.

In King’s Landing, we see Cersei’s alliance with the High Sparrow bear fruit through the re-creation of the Faith Militant, a religious army that answers to the High Septon and the gods themselves. In this fashion, the Queen Regent is able to strike against the Tyrells with complete hands-off deniability – as we see when her son confronts her later in the episode. And it’s effective:  in one day, Cersei effectively exiles Lord Mace Tyrell by sending him to Braavos under armed guard, while putting House Tyrell’s only male heir in the dungeons (and simultaneously far away from her marriage bed). In Cersei’s mind, she has complete control over the situation because the High Sparrow is a meek, pious man who views the High Septonship as “an honor I never expected, or indeed, ever wished for.”

The problem is that faith is like a wildfire — once it’s started, you can’t control what direction it burns. The High Sparrow has been remarkably passive when it comes to accepting the power that Cersei has heaped on him, but that’s not the same thing as being Cersei’s puppet. There is a subtle warning in the moment where Cersei offers the High Sparrow wine, assuming  that “you and I both know how the world works,” only to be turned down – underneath the tolerant manner and the self-deprecating jokes about the taste of wine, the High Sparrow is both a fundamentalist who inspires the Faith Militant to break heads in the names of the gods (even if, like Cersei, he is able to keep his hands clean of any direct order) and a revolutionary whose belief that “all sinners are equal in the eyes of the gods” could have unforeseen consequences for the power structure in King’s Landing. Loras Tyrell is not the only “great sinner, shielded by privilege” in King’s Landing – as newly-minted holy warrior Lancel Lannister well knows.

Thus at every step, Cersei is eliminating every rival for political power in King’s Landing — “making the small council smaller,” in Pycelle’s words — but at each step she gains relative power while losing absolute power. She’s backed the Tyrells into a corner, but without their support, she can’t stop an alliance between the North and the Vale. She’s lifted the High Sparrow to the very heights of power, but in so doing has surrendered the Crown’s hard-won monopoly on military force, and created an opening for religious authority to overtake secular authority within the capitol.

In addition to the newly-minted “hard power” of the Faith Militant, we also see the power of faith in another context when Queen Margaery turns to King Tommen to rescue her brother — leading to a tense standoff between Church and State when Tommen and his kingsguard confront a force of the Faith Militant on the steps of the sept. In an instant, Tommen is trapped in a Hobson’s choice between violating the social contract between ruler and ruled by having rebellious subjects butchered on the doorstep of the Faith’s holiest place in Westeros (as Joffrey did way back in “Baelor,” which began the process of resentment that eventually led to the King’s Landing riots of “The Old Gods and the New”), or losing authority when the King is shown to back down. When the masses shout “abomination” and “bastard born of incest,” we should remember that the charges that Stannis made public at the beginning of Season 2 would be considered not merely a secular crime, but a mortal sin in the Faith of the Seven. Legitimacy — both of Tommen and the Iron Throne itself — is at stake here.

This new power relationship between Church and State harkens back to the historical conflicts between the Holy Roman Emperors and various Popes over both matters both secular (who was the rightful ruler of Italy) and spiritual (did political authority come from an imperial election or the Pope’s blessing) that came to a head in the Investiture Conflict of the 11th and 12th centuries. At the center of the conflict between the Emperor Henry IV and Pope Gregory VII was the question of which of them had the right to appoint bishops and popes — on the one hand, Henry argued that as Emperor of Rome, he had the authority to appoint the Pope (his father Henry III had deposed three popes and installed four), and that as the bishops of Germany held huge fiefdoms, he was their feudal overlord; on the other hand, Pope Gregory VII set forth in the Dictatus Papae in 1075 a set of sweeping dictates that asserted nigh-unlimited papal authority, insisting that among other things:

“That the Roman church was founded by God alone.

That the Roman pontiff alone can with right be called universal.

That he alone can depose or reinstate bishops.…

That he alone may use the imperial insignia.

That of the pope alone all princes shall kiss the feet.

…That it may be permitted to him to depose emperors.

…That he may absolve subjects from their fealty to wicked men.”

This might seem like rather abstract posturing, but at the time it meant war. Henry IV responded with a scathing letter addressing Gregory as “at present not pope but false monk” and appointed his own chaplain the Bishop of Milan in defiance of the Pope. Gregory responded by excommunicating Henry and releasing his subjects from their oaths of fealty — which the recently conquered Saxons responded to with glee, naming Rudolf of Rheinfelden the true King of Germany. This brought the Emperor to his knees, and forced him to undergo the Humiliation of Canossa in 1077, in which Henry IV knelt barefoot clad in a hairshirt in the midst of a blizzard for three days to get the edict of excommunication lifted. A revolution in European religion and politics had occurred — where once Emperors had made and unmade Popes, now Popes could unmake Emperors.

Three years later, having repressed the Great Saxon Revolt and with Rudolf of Rheinfelden dead on the battlefield, the Emperor gathered the clergy of Germany together and declared Gregory VII deposed and Clement III the new Pope. In 1081, Henry invaded Italy, and by 1184 had captured Rome and forced Gregory into exile. Clement III reciprocated by crowning Henry Emperor and endowing him with the right to appoint popes. Unfortunately, the conflict didn’t end there with this seemingly conclusive victory of the State over the Church — within 4 years, Urban II was Pope, Clement III was abhorred as “a beast sprung out from the earth to wage war against the Saints of God,” and the Pope was at war with the Emperor, with the support of Northern Italy. The war went badly for Henry, who saw his son Conrad turn against him in exchange for being named King of Italy and his son Henry rebelling against him Germany. This latter son would become Emperor Henry V, who would repeat the whole cycle of appointments, excommunications, invasions, and civil wars that lasted until the Concordat of Worms in 1122, almost fifty years after the initial conflict, when a compromise was finally reached that saved face on both sides.

Needless to say, the historical parallel does not bode well for Tommen, First of His Name.

For another model of the interactions between Church and State, we can look north to the Wall, where King Stannis Baratheon and the Red Priestess Melisandre both wield power. In Seasons 2 and 3, Stannis wrestled with how far to take his conversion to his new faith – in order to be seen as his own man, he left Melisandre behind at the Battle of Blackwater and was soundly defeated; but the vision of victory in the far north that she showed him proved to be accurate. Now, as Stannis marches on Winterfell, he promises that he won’t “make that mistake again…I need you.” Melisandre’s reply is that “you only need faith, my king.” To win a battle through faith alone might seem ludicrous if we hadn’t seen Renly cut down by a magic that may or may not have anything to do with a god.

In order to push an army through the North with winter coming, Stannis may well need his men to believe absolutely that he is indeed “the lord’s chosen king.” And it’s easy for his soldiers to believe that, as the Red Priestess has shown herself to have power over death that the followers of the Seven simply have not shown in "Game of Thrones." At the same time, a faith driven by prophecy and miracle has its own difficulties — for all that Melisandre insists that Stannis is the chosen of R’hllor, as we saw last week, other worshippers might look for a savior reborn in fire further to the east.

And there is a price to pay for the confidence that comes with answered prayer. When Melisandre says of Shireen Baratheon that “her father is the lord’s chosen king, and her father’s blood runs through her veins,” experienced "Game of Thrones" viewers may well quail at the thought of the innocent budding teacher meeting the same fate as Iphigenia at Aulis. To the audience, the idea of human sacrifice is barbaric, a relic of an ancient age, and it’s no surprise that Melisandre is so often seen as a villain, George R.R Martin’s pick for the most misunderstood character in the series. But when Melisandre says that “there is only one war, life against death,” we know that there really is an army of the undead bearing down on the Wall. And in our own world, part of the barbarity of human sacrifice is our understanding that they don’t work — but we’ve seen that R’hllor answers the prayers of his believers, bringing the dead back to life and smiting his enemies.

At some point, Stannis is going to have to decide whether the favor of such a god is worth the cost.