D.C. acts as if he has the authoritative voice on national security and patriotism. Enough already! It's not true 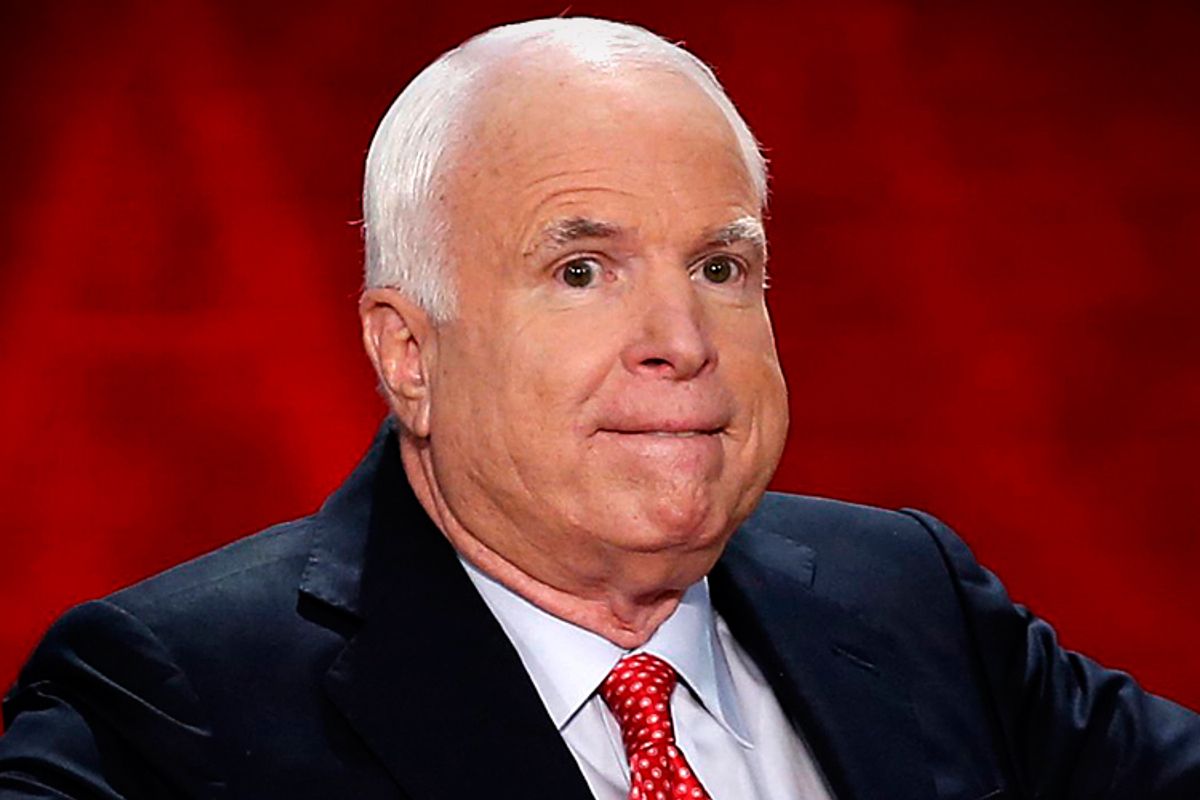 Its futility makes me so weary it’s hard to type the question, but I’ll type it anyway: Why do the elite Washington media, especially the influential Sunday morning shows, continue to pay deference to, and take seriously, the opinions of John McCain?

Put another way: What would it take for the elite Washington media to reconsider their fealty to McCain? What would the Arizona senator have to do to disqualify himself as the authoritative voice on national security issues, military affairs and patriotism?

If I were a producer for one of the broadcast TV shows, like "Meet the Press," I’d ask myself: Does the man whose reputation rests on his dedication to duty, honor and sacrifice deserve such a reputation in light of recent moves to privilege the Republican Party over the United States?

Before I go on, please note this complaint of mine is just one of many — many! — complaints among media watchers. Paul Waldman, over at the American Prospect, has kvetched for years about McCain’s “mavericky maverickness.” He wrote an entire book about it. So don’t take my complaint as new or even influential. My aim is to note merely how this latest episode is a clear example of McCain’s long con on the media. It illuminates his using the veil of patriotism to shroud what is plainly partisan politics.

This was further complicated when McCain publicly called into question the credibility of Secretary of State John Kerry after news broke of an agreement between the nations over the framework of a nuclear deal. And there’s more! McCain said he trusted the judgment of Iran’s Supreme Leader, the Ayatollah Ali Khamenei, over Kerry’s. Clearly, the enemy of his enemy is his friend.

I’d add only a representative remark by presidential hopeful Mike Huckabee. He recently advised any young person desiring to serve her country in the armed forces to wait until 2017. Why? Because Barack Obama is not a Republican.

“Wait a couple of years until we get a new commander in chief that will once again believe ‘One Nation under God,’ and believe that people of faith should be a vital part of the process of not only governing this country, but defending this country,” he said.

You might say: Well, McCain signed the letter only because his party wanted him to. That’s not the real John McCain. The real John McCain is an independent voice, a bipartisan figure who often challenges his party. In other words, a maverick.

McCain did memorably use the term “wacko birds” in 2013 to describe Senate Republicans like Rand Paul who were carping about the nomination of John Brennan as CIA director. (Paul didn’t like that Obama’s drone policy was Brennan’s brainchild.) And indeed, McCain might place Huckabee in the same “wacko bird” category.

You might also say: Come on. The real John McCain isn’t a wacko bird. OK, I say, then the real one is feckless. According to Politico‘s Burgess Everett, McCain signed the letter without much thought. “It was kind of a very rapid process,” he said. “Everybody was looking forward to getting out of town because of the snowstorm. I think we probably should have had more discussion about it, given the blowback that there is.”

In other words, he only did what his party asked of him.

In other words, John McCain is a Republican partisan.

How, then, we do understand the Washington media’s universal portrayal of John McCain as a “maverick”? Waldman says it comes from mastering the art of flattery. McCain, he says, “spent a couple of decades massaging their egos and convincing them that he was their best buddy, an investment that paid off splendidly.”

I don’t doubt it, but I’d add another perspective.

John McCain, I suspect, might be better understood as a metaphor, as a mental projection of what the elite Washington media believes a man dedicated to duty, honor and sacrifice would look like. And John McCain, knowing that few journalists personally know anyone who served in the military, much less saw mortal combat or, like him, experienced life as a prisoner of war, exploited that mental projection to the hilt. These same journalists, I would guess, are as awed by his biography as they are by anyone who can pull the levers of power in Washington. Put it together, and you have not so much a human being as a fetish: a there that isn’t there.

Given the state of the Washington media, I suppose a fetish is as good a reason for John McCain’s ubiquity as any other. As I said, nothing is going to change. Just asking why anyone takes him seriously is exhausting. And for that reason, I’ll stop asking.