Our police-state fantasy: Why TV news coverage of Baltimore "seems to make people comfortable with the idea of martial law" 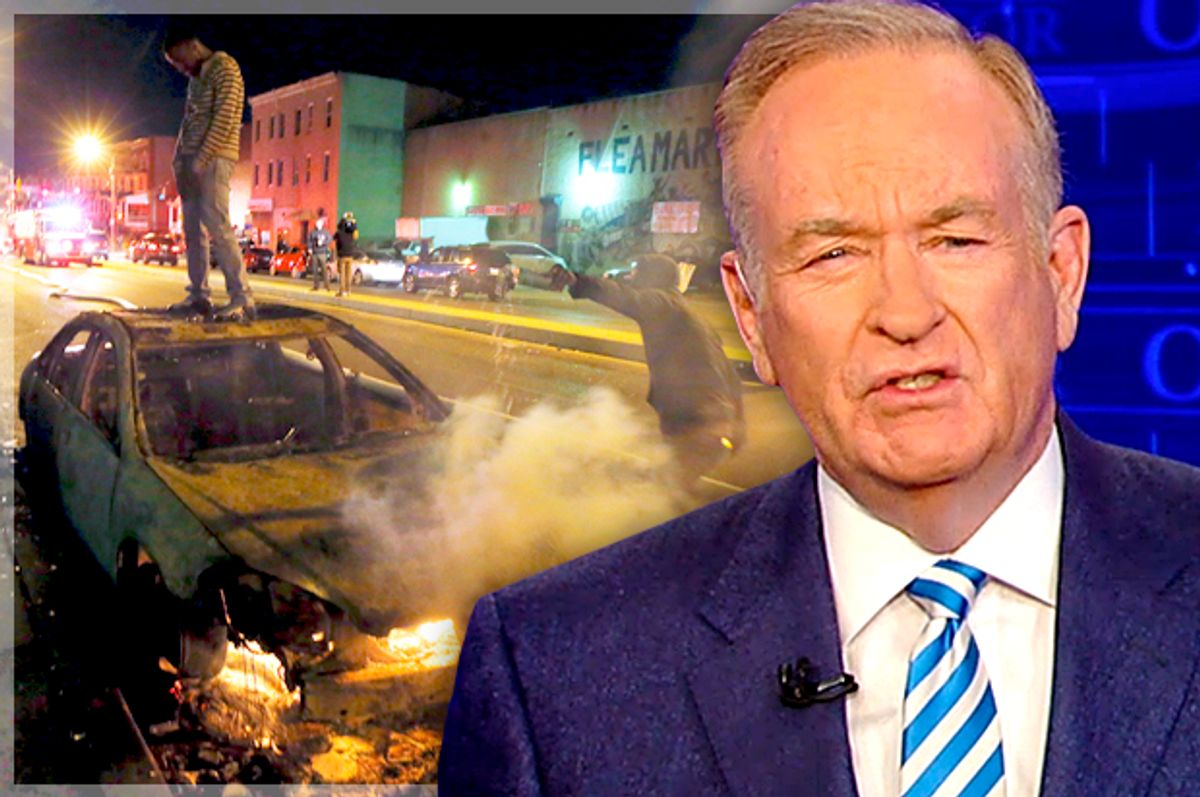 Mark Crispin Miller is a media scholar who teaches at New York University, for many years the home of one of the field’s pioneers, Neil Postman. Before that, he lived for years in Baltimore, where he was as student and later a professor at Johns Hopkins. We spoke to him about his former hometown, television coverage of urban unrest, media ownership, and how it all distorts our vision of reality.

You did a survey of media coverage in Baltimore, back in the ‘90s, that sheds some light on what’s happening there today. Tell us a little about it.

It occurred to me, as a media critic, that the inevitable nightly over-emphasis on violent crime in the city might have a deleterious effect on the city’s economy, by keeping regular viewers of the news away from city businesses, out of fear. So we commissioned a poll of people in [suburban Baltimore County.] And indeed we found a correlation between how much news people watch and how frightened they were of the city. This is a time when the city desperately needed revenue from the surrounding area. And this was all unrelated to the actual crime rates. So the argument we made was that because all of these local stations were owned by media corporations outside the city itself, they were effectively starving the city of much-needed revenues by pumping out this unconscious anti-urban propaganda.

It got a very hostile reception from the media in Baltimore – they accused me of claiming that TV news invented the crime problem. I was not saying that – I was saying that this was journalistically irresponsible and that this sensationalism was having a destructive effect. I would argue that it never stopped having that effect.

What does the news coverage of Baltimore, on TV and online, look like today?

It’s crap – it’s always been crap. Every time the cities have exploded they’ve done the same thing, which is sensationalized the violence and presented it as an irrational explosion of savagery by de-historicizing it. And by repeatedly failing to treat the city’s problems in the kind of serious way was have the right to expect from our Fourth Estate.

This is a point Jon Stewart made – ever since the race riots of the ‘60s, it’s the same old thing. It doesn’t help, and it seems to make people comfortable with the idea of martial law. I think it’s happening right now.

But what we’re seeing on TV is not theater, they’re just turning the cameras on to document it, et cetera, et cetera — this is not a sound stage but “on the streets.”

They aren’t giving us cinéma vérité: They’re not simply turning the cameras on but providing a relentless commentary. They have a tendency to hype the violence and the spectacle by commenting on the fearfulness and horror of it all. Wolf Blitzer has been doing this past the point of absurdity: In his overeagerness to dramatize this spectacle, he acts as if we’ve never seen such a thing in the history of the country. He’s actually said this repeatedly. “Who can believe we’d see something like this in an American city?” It’s happened in living memory and he has covered it in the same way!

Let’s be honest: They’re not simply disinterested. They’re not there to hold the mirror up to nature and simply report what’s happening. They’re there to make as much money as possible and to attract viewers to sell advertising. They take every opportunity to hype the spectacle. And it’s the hyping that makes it unilluminating, and at worst dehumanizing. They translate these desperately disadvantaged and brutalized fellow Americans into dangerous criminals – “thugs.” They don’t do that when they show white rioters – they don’t do that over footage of drunken undergraduates on spring break, or a rock festival spun out of control. But they do it when they are rioters of color. So the effect is quite destructive, and I think it’s not any stretch to say that the coverage has a racist slant to it.

We no longer depend on three more-or-less centrist networks, but have a fragmented television landscape which ranges from the corporate center to the Tea Party right. How does this change the way we see things?

The deregulation of the media has clearly made for a much more inflammatory news spectacle. The elimination of the Fairness Doctrine, and the deregulation of station ownership — so now a few companies own tons of stations — has helped to create a right-wing media system that explicitly plays on racist and nativist sentiment. Out of all proportion of the political views of the population. When Fox does its thing, it raises the ante for the more centrist outlets like CNN: The entire spectacle becomes much more provocative and extreme. Wolf Blitzer’s commentary is extreme: He’s asking us to see something much more dangerous and horrific than we’ve ever seen before. That’s an extreme view, even though his own politics are right down the corporate center.

So yeah, it’s definitely changed. There are not the same regulatory restraints,  And populist rabble rousers like Sean Hannity and Rush Limbaugh have been unleashed by this system. You watch the spectacle and you infer from it a national population that is probably far more right-wing than people actually are. The deregulation of the media has created the illusion of a right-wing majority, or at least a large plurality, that really doesn’t exist. It’s skewed our sense of ourselves as a nation.

Part of what you describe has to do with bogus redistricting. What you’re describing is sort of the media equivalent of gerrymandering.

It’s the subversion of the electoral process through a range of things, including gerrymandering, including ways to block voter registration drives, as well as the use of electronic voting machines, which are very easily hacked, and the domination of the system by private companies. Nobody really talks about that, but it’s a serious problem. All of these devices have made our elections as unrepresentative of the American population as our media system, because of deregulation.

Another issue is the militarization of urban police departments. I read an article recently that said that the Baltimore police department, just by showing up in the guise of an occupying force, by virtue of their extreme post-9/11 militarization, has provoked a hostile response. People who grow up in bastions of privilege don’t understand what it’s like to be policed by a force that treats you and your neighbors like an enemy population.

So when you turn on Fox or CNN or whatever it is, and you see these images of tremendous violence, accompanied by this alarmist soundtrack, you’re probably going to be inclined to think, “Good! Send in those troops. Let’s restore order as soon as possible.” It invites a tolerance for a style of policing that’s not only brutal in those disadvantaged neighborhood, but threatening to everybody’s civil liberties.

We’re talking about a police-state fantasy that people will indulge when they are frightened. And since so much of what’s on TV is calculated to frighten us, it’ll have that effect.

Does the fact that so many of the major TV outlets – Fox, CNN and so on – are owned by the same corporations that own movie studios, have any shaping force, here? Some of the news coverage looks like a bad action movie.

That’s probably inadvertent. What’s safe to say is that the fact that the same few companies own the media industry intensifies the pressure on those who work in those industries to serve the bottom line above all else. There’s just tremendous pressure on everybody who works at Time Warner,  News Corporation, whatever it is, to jack up those ratings, sell as many tickets as possible. It isn’t necessary for the people in the news division to be aware of movie thinking; it just happens automatically.

The people who work in TV news, with very few exceptions, are not thinking about honoring their First Amendment obligation to inform the country. Their professional behavior is driven less by their constitutional duty, as members of the Fourth Estate, than by the board’s fiduciary obligations to the shareholders.

People say, well, we have a liberal media — most of the people who work for television stations are urban, moderately liberal people. But it doesn’t really matter when they’re working for a structure that’s about hyping and pumping up.

The rightists who scream and yell about the liberal media base their entire attack on that sociological fact that people who work in the news media tend to be socially liberal — they’re tolerant of abortion and same-sex marriage, stuff like that.

But that’s a ridiculous argument. Of course their own attitudes will affect their coverage of some stories. In fact, they’re more likely to bend over backwards to respect the right wing because of their own personal liberalism than they are to act like Rachel Maddow or something.