Rodney King's shadow hangs over Baltimore: What the history of the L.A. riots can tell us

It's a sad testament to America that the 23 years since the L.A. riots have seen so little change. What comes next? 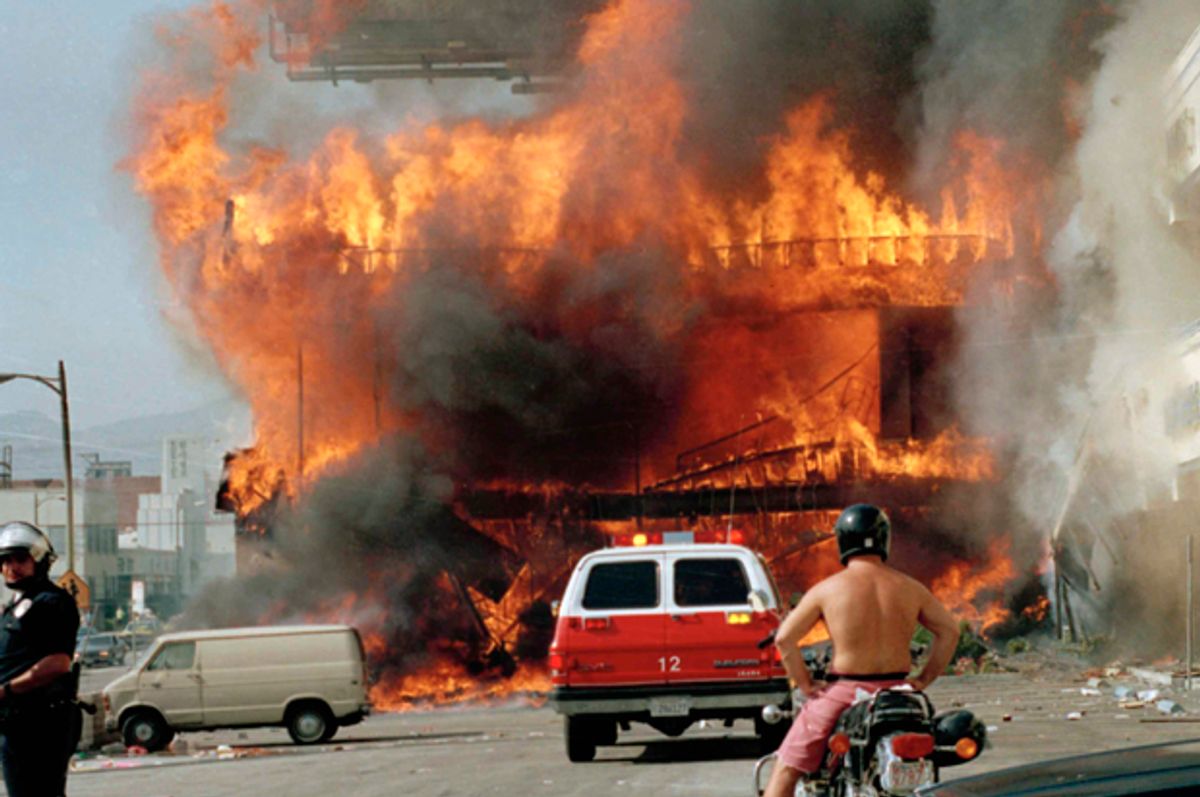 Many publications, including this one, have remarked on the terrible coincidence of the Baltimore unrest coming almost 23 years to the day after the Rodney King riots in Los Angeles. It's a sad comment on our nation that for nearly 50 years we can look back on riots on American streets, almost always started in reaction to police brutality against racial and ethnic minorities. Of course, America has suffered urban rioting for centuries, not just decades, many of which were brought on by different precipitating events. (For instance, L.A.'s famous Zoot Suit riots in 1943 were also racially based, but featured white members of the US military, rather than the police, assaulting Mexican American and African American men on the streets.)

There is a lot of important discussion these days setting forth the idea that America's propensity to throw large numbers of racial minorities into the prison system is at least partially to blame for these sporadic bursts of racial unrest. In her celebrated book "The New Jim Crow," legal scholar Michelle Alexander made a compelling case that the blatantly racist structure of the past has simply been repackaged as "law and order" policies, leading to mass incarceration at the highest levels on the planet.

After decades of cruel, failed policies like "three strikes" and mandatory minimums there is finally some movement across party lines to address this problem. Presidential candidate Hillary Clinton gave a well-received speech on the subject just last week, even repudiating, if not by name, some of former president Bill Clinton's initiatives. There is talk of the Koch brothers and other wealthy conservatives and libertarians joining the fray. There does seem to finally be some recognition that these policies have done far more harm than good. In the wake of protests all over the nation -- after the police killings of Michael Brown, Eric Garner and Freddie Gray -- these discussions are even more urgent.

But mass incarceration is only a piece of the puzzle.  The other piece is police tactics in the communities they are allegedly protecting. So it's worth taking a look at what happened in Los Angeles after the riots in 1992. Keep in mind that compared to what we've seen so far in Baltimore, the unrest and damage then was massive. There were at least 53 deaths, 2,383 injuries, over 16,000 riot-related crimes, over 12,000 arrests, 7,000 fires and $1 billion in damage reported. California deployed more than 10,000 National Guard troops and even had thousands of active duty federal troops and Marines patrolling the streets.

Everyone knows why that happened. Four white officers charged with beating of Rodney King one night by the side of the road were acquitted by an all-white jury in a Los Angeles suburb favored by LAPD. It was emblematic of the injustice that members of the black community dealt with every day at the hands of the police and the judicial system. And their anger burst in an ugly and destructive way for 6 long days. At the end of it, much of South Central LA was ruined. There were many promises to rebuild and some improvements in corners of the area were made. But the poverty and lack of opportunity that existed there then are little-improved today.

However, one thing is different now: The relationship of the police and the people of South Central. And this is because, for all the promises that were made in the aftermath, reforming of the police department actually happened. It took years and it's still imperfect --- police brutality still happens --- but the culture seems to have changed for the better.

A report from ThinkProgress discusses these changes. Calling heavily on the book "Blue: The Ruin and Redemption of the LAPD" by Joe Domanick of the John Jay College of Criminal Justice, the report points out that it was the LAPD that had, prior to the riots, led the way nationally on the militarization of police. It was an early adopter of SWAT and other quasi-military tactics under the leadership of its long time chief Darryl Gates, the man in charge on the day the city exploded in anger at the officers' acquittals. (He was busy at a political meeting at the time, and didn't initially respond.) The LAPD had been known for many, many years as a department prone to excessive force. They had talked about reform in the wake of the 1965 Watts riots, to little avail. It was hoped that after 1992 people would listen.

The Christopher Commission, which formed in the wake of the Rodney King beating, but before the riots, had a number of good ideas that formed the basis of reforms to come later, according to Domanick. The one important recommendation the city took up almost immediately was to term-limit the chief of police. Subsequently, the Department went through several different chiefs over the course of a decade, some of whom made some progress but failed to fundamentally reform the dysfunctional police culture that was Darryl Gates's legacy. But Domanick reported that things finally changed in 2002, when former (and current) NYPD Commissioner Bill Bratton was appointed chief of the Los Angeles Police, and instituted a program of "community policing."

Underlying this approach is the idea that police can rarely solve public safety problems alone, and require the input of various stakeholders to come up with solutions that might be resolved by social services or other measures instead of a heavy police hand.[...]

The change, of course, did not come out of nowhere:

Five years after King’s death, the city finally instituted a recommendation to create an independent inspector general to review the Department. In 1994, Congress passed provisions in the Crime Control Act meant to address police misconduct in a more systematic way, partially on the momentum of the [Amadou] Diallo beating. One provision gave the Department of Justice the power to bring civil suits against local police departments that exhibited a “pattern and practice” of excessive force or other constitutional violations, and the Department used that power to enter into a settlement known as a consent decree with Los Angeles.

With the building blocks in place, Bratton proceeded to "transform" the Department:

As in Ferguson, what was most lost after the Los Angeles riots is what is known as “police legitimacy” — community trust in the police that underlies all of their work. Bratton instituted an era of communication and respectful interaction between individuals and police, creating a department that reflected the community and building relationships with community leaders. He even demonstrated some inclination for holding officers accountable. After a violent police response to 2007 immigration rallies in McArthur Park, Bratton announced immediate investigations and several officers were eventually demoted or fired.

Bratton's tenure was not without controversy, however. As The Nation points out:

Bratton personally commissioned a 2009 Harvard study of the LAPD that showed an escalation of stops—of both pedestrians and motorists—from 587,200 in 2002 to 875,204 in 2008, equally or surpassing the stop-and-frisk numbers in New York, where the policy was ruled unconstitutional and was a central issue in de Blasio’s campaign. Well over 70 percent of 2008 LAPD stops in inner-city precincts were of African-American and Latinos, a ration similar to New York’s.

There was a “steep increase” in arrests for minor crimes, known as Part Two (loitering DUI, disorderly conduct), in keeping with the Bratton philosophy of “broken windows” policing, while arrests for serious (Part One) crimes such as homicide and rapes declined to only 15 percent of total arrests from 2003–07.

Residents in L.A. don't like the "broken windows" tactic any more than do residents of New York. And Los Angeles today is hardly a utopia. It still has large, intractable pockets of crime and poverty. And police violence is still an unfortunate fact of life: Since 2000, 618 people have been killed by police.

But, for whatever combination of reasons, there is far less simmering anger among minority communities toward law enforcement. A poll taken just last week tells the tale:

In 1997, 64.2% of polled adult Los Angeles residents thought it "very likely" or "somewhat likely" that a riot would occur in Los Angeles in the next five years. That percentage has declined in each of the four polls conducted since then. In 2015, 43.8% of residents polled thought a riot was at least somewhat likely.

Broken down by race, this year's survey showed that Asian residents were the most likely to think Los Angeles would experience widespread rioting in the next five years, with 53.7% of those polled thinking it was at least somewhat likely.

Of Latinos polled, 45% thought a riot was at least somewhat likely. White residents were the most optimistic, with 39.6% saying that a riot was likely, closely followed by 41.3% of black residents who said the same.

The survey also queried residents on race relations, with 82.4% of Angelenos saying that race relations have either stayed the same or improved over the last four years — compared to 17.6% who said they had gotten worse.

This echoes similar sentiments reported in a USC Dornsife/Los Angeles Times statewide poll released last month in which nearly three-quarters of respondents said race relations were excellent or good in their neighborhood — though an overwhelming majority say that African Americans and Latinos still face significant discrimination.

As suggested by Bratton's complicated legacy in Los Angeles, the reforms that police are willing to countenance might never be perfect. But one hopes that Baltimore's actions on Friday in charging officers with a crime and putting the evidence to the test in front of a jury will be a step in the right direction. You can't solve all the problems of poverty and lack of education and opportunity in our cities overnight. But you can make sure that the public and the police know that officers are not allowed to arrest suspects without probable cause, throw them in the back of a van and cause them to die from a severed spine -- and that if they do such a thing they will be held to account. For all the problems people of color in our nation face, that's one we can solve, if only the effort is made.