Dangling a bit of justice doesn't make us equal: What's next in Baltimore

As celebrations broke out in my city, I smiled for the first time in a week. But will we just get railroaded again? 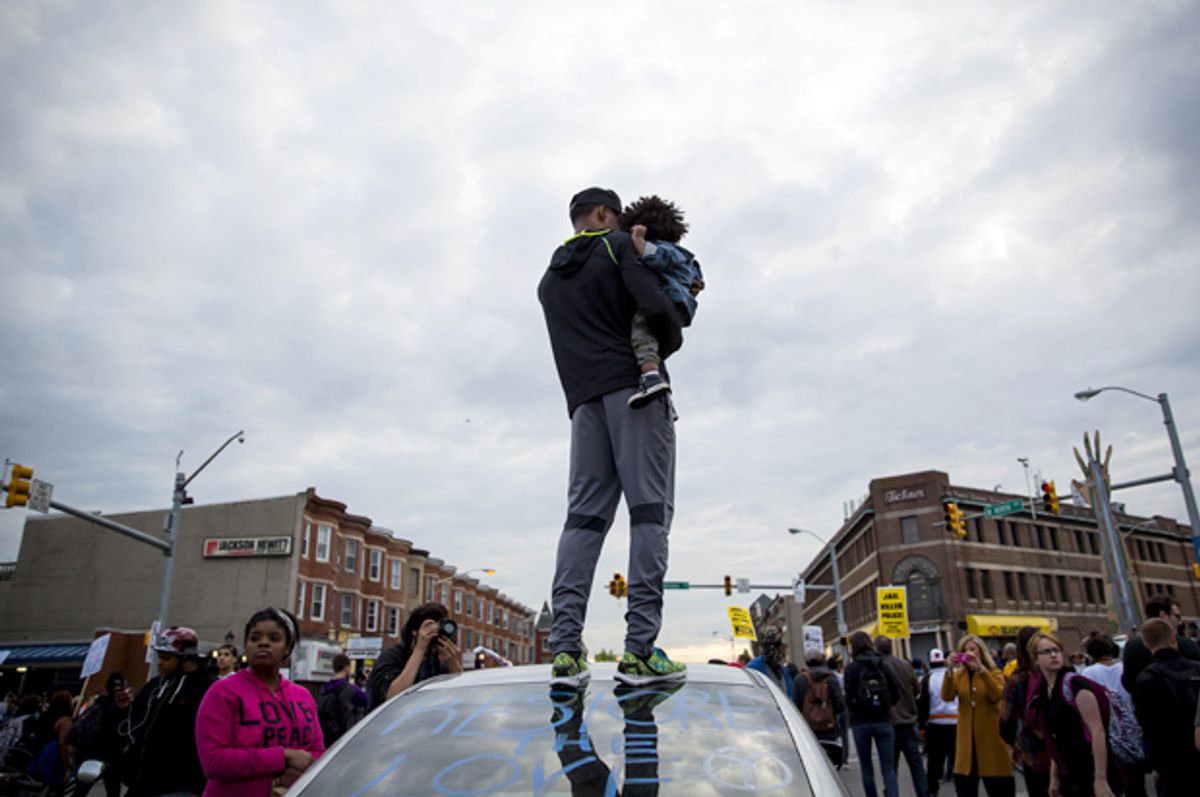 My Instagram feed has been flooding with pictures of States Attorney Marilyn Mosby — championing her, crowning her Baltimore’s new mayor. In one effortless move, Mosby threw the ball between her legs, whipped it behind her back, splitting a trio of defenders before powering deep in the paint and slam-dunking charges on all six of the cops involved in the death of 25-year-old unarmed Baltimore native Freddie Gray — making history and healing the city at the same time.

Meanwhile, Baltimore has been flooding with happiness and tears of joy. Atheists praised Jesus, homophobes hugged drag queens. The city was like Woodstock, every race marching up and down every major road together, as celebrations erupted across town.

My cousin Mike balanced himself acrobatically on his blue CR 85 motorcross bike as he jetted up and down Ashland Avenue in honor of Mosby. Other dirt bikers followed in traditional Baltimore fashion with tricks that excited kids and blocked traffic. I cheered them on, with a foot-long grin, a smile so big it hurt, the first time I smiled in a week.

“We did it, yo! We got them cop bitches, they goin’ down!” a kid yelled, guzzling a Pepsi.

I sat out there with the young dudes for a while, soaking up their positive energy before we all rushed home because of Mayor Rawlings-Blake’s 10 o’clock curfew.

On the way home, I thought about the smiling faces I’d seen out all day, along with the mass celebrations, marches and street performances. A huge number of us African-Americans in Baltimore and probably most of America can’t say we know what justice is, how justice works, or what justice feels like. I was starting to worry: Would we find out this time?

Last Monday Baltimore burned — mentally, emotionally and literally. Freddie Gray laid peacefully in his white casket as the city watched, feeling broken and helpless. Frustrated with the way these stories normally turn out, and with the Baltimore city police department in general, a collection of young people, including me, took to the streets. What started as peaceful meet-ups and protests quickly escalated to what will forever be known as the Baltimore Uprise.

I watched police cars get smashed like aluminum cans, and businesses be ripped apart into gutted frames — partially because of Gray but also because of Baltimore’s history with the police department. Almost every black person I know from a poor neighborhood can give you a collection of nightmare stories about the BCPD, ranging from their psycho power trips and unnecessary beatings to the way they plant drugs on whom they want to arrest and ruin the lives of sometimes innocent people whenever they see fit. The people of Baltimore were tired of police brutality being normal, so they took a page from the cops who gather joy from harassing us and decided to strike back just as hard.

I believe, along with many other people, that the destruction was key in Mosby’s quick decision to bring about charges, but whatever the case may be, the young state's attorney made the city proud and sparked nationwide celebrations. I just hope we didn’t proclaim victory too soon.

Year after year, case after case, and murder after murder, black Americans have sat in pain, forced to watch the killers get off on technicalities. Zimmerman had "stand your ground," Darren Wilson had a magical grand jury exempting him of accountability, and I don’t even think god knows how the group of cops who killed Eric Garner on film with an illegal chokehold got off. Either way, the collection of these cases and many more has created a These Guys Always Get Away type of culture, making many of us think killing black people is legal. Which explains the current mood in Baltimore.

We are so used to being railroaded by the legal system that dangling a bit of justice in front of us is enough to blindly make us feel like we are equal, when we still have so much work to do. I walked back from the weekend parties with all this on my mind. Once I reached the crib, I called my cousin.

I told him that celebrating the charges was cool; however, we still did not receive justice for Freddie Gray and the thousands of other victims of police brutality. “It’s almost impossible to convict a cop in America,” I say, thinking about the laundry list of police officers who beat cases as fast as Ali in his prime.

“How cops be winning all the time?” he asked.

“Well, in Baltimore and many other places in America, you have to register to vote in order to sit on a jury. So many of us don’t vote because we been through the system or don’t trust it, meaning that these cops could get a jury full of cop lovers who could care less about our community.”

“Yeah, but we got the people on our side this time!” he replied, probably thinking about the multicolored protest. I had to school him on Rodney King and how the officers who beat him on film were able to win their initial case by moving it outside of L.A., where the crime happened, to Simi Valley, a cop-friendly suburb full jurors who saw nothing wrong with almost beating a black man to death during a traffic stop. Just like Freddie Gray, the Rodney King case was over-saturated with media coverage and the courts felt King’s beaters wouldn’t receive a fair case. I’m pretty sure they are going to attempt to do the same thing with these officers.

“I still feel like this won’t happen to us!"

He could be wrong, though. I told him to get out there and spread the word about how important it is to register to vote before we hung up. Afterward I sent him a clip of the cops' lawyer Michael Davey, who said his clients did nothing wrong, with a caption that read, “Yo, this is the pure evil that we are up against.”

According to Davey, the officers “at all times acted reasonably and in accordance with their training.” His speech made me nauseated, wanting to stop all of the celebrations completely. Achieving justice for Freddie Gray and the rest of the victims of senseless acts of police brutality is going to take more than what we’ve done to reach this point. Raising awareness and mass voter registration is a start, but how do we change Davey and people with the same mentality?

I’d personally like to start that conversation by asking Davey what if Freddie Gray were his son, his oldest son -- the namesake, Michael Davey Jr.? Then I’d ask what if a pack a of rogue police officers stopped young Michael Jr. in his neighborhood for no reason before attacking him and then leaving him limp and breathless in the back of a van with a broken spinal chord and smashed voice box? What if you heard that Michael Jr. asked for medical attention, not one, not two, but three times and was ignored? What if that medical attention could have saved Michael Davey Jr.'s life, and it haunts you as you lay his dead body to rest?

And then what if you flick on the TV and hear Sean Hannity drag your son’s name through the dirt by calling him––the late kid you love—a common criminal and a thug with traces of weed or heroin in his system, even though the cops offered no real reason for stopping your son?

And then I’d pose the same questions to the judge, the jury, the cops who did it and everyone else who thinks like Davey.