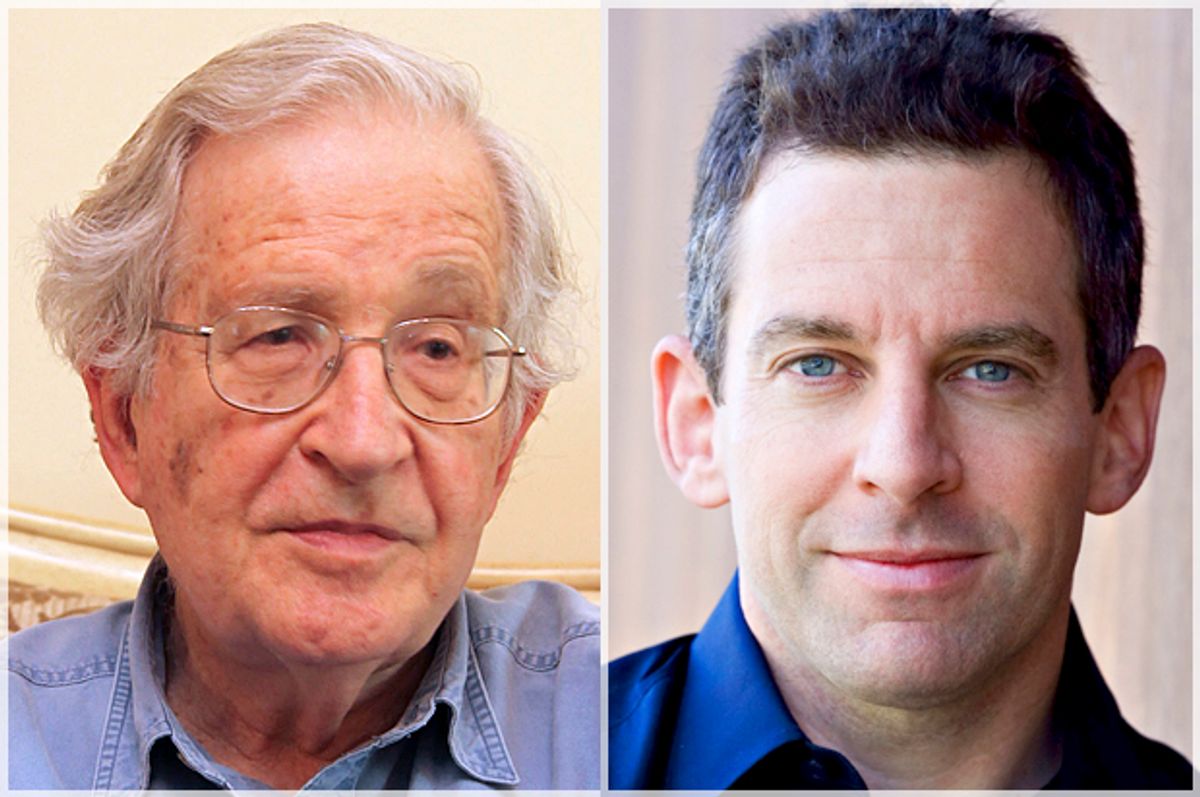 Controversial author and new atheist Sam Harris recently tried to "engineer a public conversation" with radical linguist Noam Chomsky "about the ethics of war, terrorism, state surveillance, and related topics." Harris shared the exchange publicly, chalking it up as an "unpleasant and fruitless encounter."

Readers might disagree. By turns contentious and hostile, their dialogue is never anything less than fascinating.

The first volley belonged to Harris, who invited Chomsky to clear the air and clarify any misconceptions the two might have about each other's work.

Noam —  I reached out to you indirectly through Lawrence Krauss and Johann Hari and was planning to leave it at that, but a reader has now sent me a copy of an email exchange in which you were quite dismissive of the prospect of having a “debate” with me. So I just wanted to clarify that, although I think we might disagree substantially about a few things, I am far more interested in exploring these disagreements, and clarifying any misunderstandings, than in having a conventional debate.

If you’d rather not have a public conversation with me, that’s fine. I can only say that we have many, many readers in common who would like to see us attempt to find some common ground. The fact that you have called me “a religious fanatic” who “worships the religion of the state” makes me think that there are a few misconceptions I could clear up. And many readers insist that I am similarly off-the-mark where your views are concerned.

In any case, my offer stands, if you change your mind.

Chomsky, in turn, sent a rocket towards Harris' baseline, accusing the neuroscientist and philosopher of willfully misrepresenting his views.

Perhaps I have some misconceptions about you.  Most of what I’ve read of yours is material that has been sent to me about my alleged views, which is completely false.  I don’t see any point in a public debate about misreadings.  If there are things you’d like to explore privately, fine.  But with sources.

Unfazed, Harris again invited Chomsky to participate in a public exchange before offering an apology of sorts for his characterization of Chomksy's writings in his first book, "The End of Faith."

Thanks for getting back.

Before engaging on this topic, I’d like to encourage you to approach this exchange as though we were planning to publish it. As edifying as it might be to have you correct my misreading of you in private—it would be far better if you did this publicly. It’s not a matter of having a “debate about misreadings”; it’s a matter of allowing our readers to see that conversation on difficult and polarizing topics can occasionally fulfill its ostensible purpose. If I have misread you, and you can show me where I’ve gone wrong, I would want my readers to see my views change in real time. It would be far less desirable for me to simply report that you and I clarified a few things privately, and that I have now changed my mind about X, Y, and Z.

Read the rest of their exchange and a postscript from Sam Harris on his blog.