The ludicrous myth of Republican fiscal responsibility: A history lesson for the modern GOP

The GOP loves to insist that Democrats have caused a fiscal crisis. But the real story looks far different 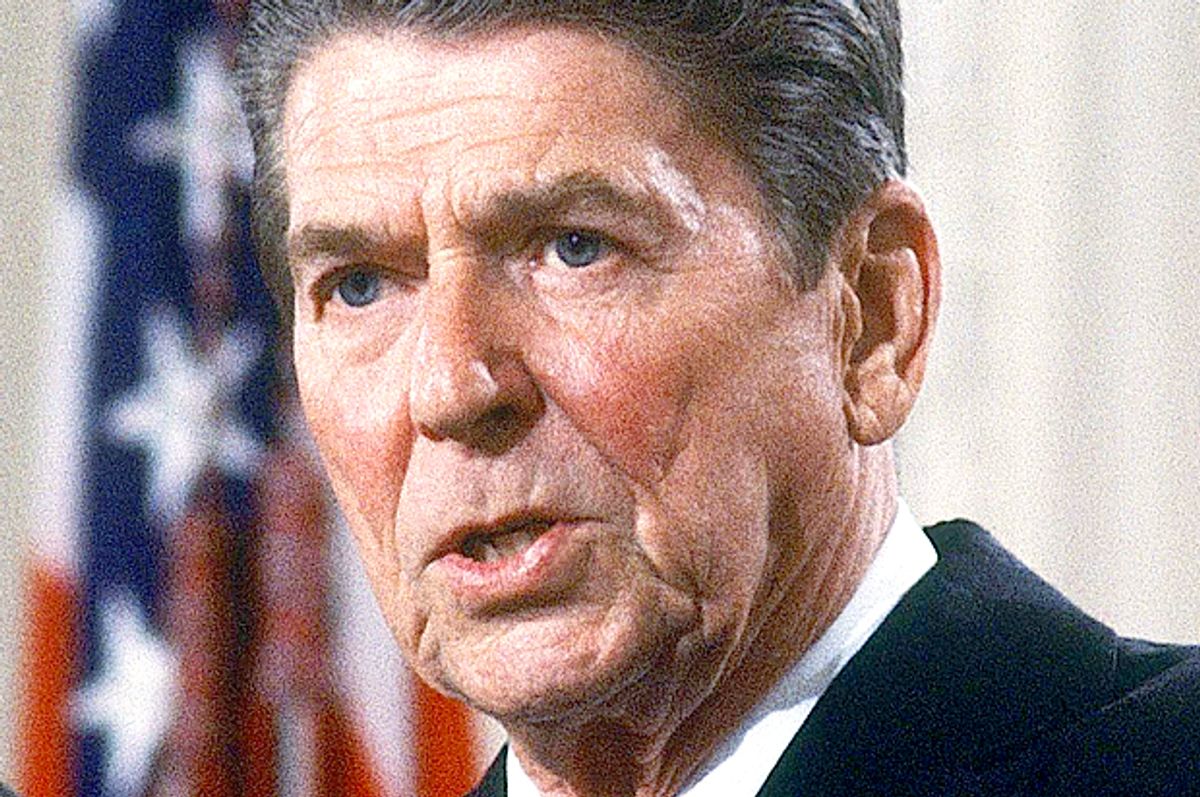 Over the past three decades, the Republican party has followed a familiar strategy -- get elected to executive office by preaching fiscal responsibility, make a complete mess of things fiscally, and then, when a Democrat comes in to clean up the mess, blame them endlessly for not fixing it fast enough. We see this currently, with the insipid Republican candidates blaming President Obama for our current debt level, despite the fact that Republican policies, like cutting taxes for the wealthy and putting two wars on the credit card made it all possible.

It is a kind of reasoning that Mitch McConnell presented when Obama first entered office, saying, “The single most important thing we want to achieve is for President Obama to be a one-term president.” Not to help revamp the middle class or get the economy back on track or end disastrous wars, but to make Obama a one-term president. Here lies the reasoning of the Republican party. Their sole goal is to attack and defeat the Democratic president, and to do this, they complain about issues like inequality or the deficit, and then hijack any proposals that the president advances to address them.

Since the first day Obama stepped into the Oval Office, the federal debt has not only become a catastrophic issue for Republicans, but also one entirely attributed to Obama and the Democrats. This is a major change in heart from a decade earlier, when Republican Vice President Dick Cheney said to Treasury Secretary Paul O’Neil, “You know, Paul, Reagan proved deficits don’t matter.” Indeed, Ted Cruz’s hero Ronald Reagan was the original deficit master.

When Reagan took office, he advocated fiscal responsibility, as his disciples do today. But his presidency was anything but responsible when it came to fiscal policies. The size of America’s debt when he entered office was $1 trillion, and by the end of his two terms, it had grown by 190 percent, to $2.9 trillion, nearly tripling under his leadership. By the the end of twelve years of Reagan-Bush administration, the debt had quadrupled to $4 trillion. Reagan’s policies were ideological in the beginning, and pragmatic towards the end. In his first year in office, he signed major tax cuts into law that were supposed to reduce revenue by $749 billion over five years. This was the “starve the beast” tactic, which the Reagan administration quickly realized was impractical, and the following year signed into law the Tax Equity and Fiscal Responsibility Act of 1982, which was the largest tax increase in American history. For the remaining of his presidency, Reagan backtracked from that initial tax cut, increasing income taxes as well as gasoline and social security taxes, which he would use to fund his runaway spending.

While Reagan's criticism of Jimmy Carters' deficit spending helped land him in the office, by the end of his run, spending had only increased in share of national income. Indeed, both Ford and Carter were better at cutting government spending -- their presidential terms combined for a 1.4 percent increase of national income, while Reagan’s spending grew 3 percent.

Rather than going the responsible “tax and spend” route, Reagan decided to “borrow and spend.” Reagan achieved this with the help of Alan Greenspan, who he appointed as the Chairman of the National Commission on Social Security Reform. He enacted a tax increase for the regressive social security payroll tax, and then, as the first surpluses arrived, rather than saving and investing it  for working America’s future, they spent it all. It was used to replace all of the lost revenue from Reagan’s early tax cuts for the wealthy. Or in other words, it was the ultimate redistribution of wealth, stolen from the working class and handed to the top one percent. Today, the largest holder of America’s debt is not China, as mostRepublican’s imply, but the social security trust fund, or the American working class.

So, Reagan and Bush Sr. quadrupled America’s debt, following a decade of fiscal irresponsibility and regressive tax increases that ultimately defrauded America’s working class. And then, of course, Democrat Bill Clinton came into office to clean up the mess. In his first years, Clinton enacted tax increases for the wealthy, and the effective total federal tax rates rose significantly for the one percent. When Clinton signed these increases into law, Conservatives warned it would destroy jobs and stifle economic growth -- but the opposite happened, the economy flourished.

Of course the internet boom contributed to the great economic growth and an increase in tax revenue, which helped Clinton balance the budget and run a surplus in his final years in office. But the reality is that Clinton rose taxes to match spending, rather than cutting taxes while increasing spending, as did Reagan. Clinton was fiscally responsible, and he left George W. Bush with a budged surplus of $86 billion.

And what did the Republican do with this wonderful gift? He did the usual -- cut taxes for the wealthy, and rapidly increased spending by starting two extremely expensive wars. Bush’s fiscally irresponsible policies raised the debt by over $5 trillion. This, along with his administrations lack of Wall Street oversight, helped fuel the financial crisis that he would pass down to President Obama.

When Obama took office, we were in the midst of the worst economic downturn since the Great Depression, and he inherited a $642 billion deficit, versus Clinton’s $86 billion surplus. Because of the recession, the government tax revenues dropped significantly, before he even entered office, while spending increased with financial bailouts; a perfect recipe for major deficits. Now, there is no doubt, Obama could have pushed for certain policies that would have lowered the deficit faster, like ending the Bush tax cuts rather than extending, but when compared to previous Republican presidents, Obama is shaping up to be on the side of fiscal responsibility. Today, the federal deficit has returned to pre-recession levels, at $483 billion, compared to the $642 billion he inherited from Bush.

But still, Republicans will say that Obama has added more nominal debt than any of his predecessors -- which is true. But it is the wrong way to measure it, especially because each president inherits a debt, deficit, and economy from the previous one. In this case, Obama inherited the worst of the worst, and much of the debt that piled on during his term was from his predecessors policies. The other significant problem with this measurement is that it does not account for growth rate. In Obama’s first six years, the debt increased by about 70 percent, compared to a 130 percent increase in Ronald Reagan’s first six years. It grew even faster under wartime presidents F.D.R. and Woodrow Wilson.

When it comes down to it, history will show Obama as a fiscally responsible president, just as it shows Republicans as fiscally irresponsible. But for today, we will continue to hear constant hyperbole about Obama’s debt and how it is somehow his own creation. But it is not his creation, and neither is income inequality, which Republicans have now decided to blame on Obama as well. This is what they do; create a filthy mess, leave a mop for Democrats to clean it with, and then scream and bicker at them as they stand over it, cleaning. This myth of Republican fiscal responsibility will be pushed hard in the coming year, but reality tells a much different story.