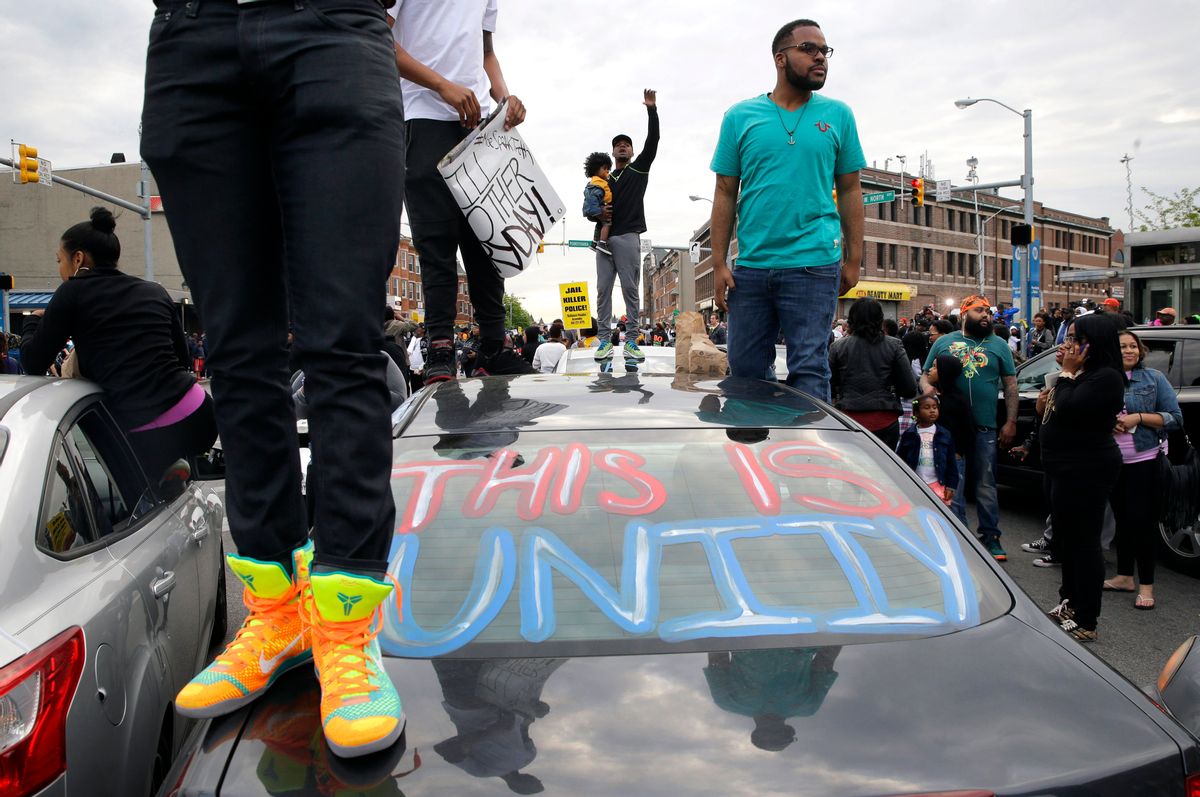 Protesters stand on cars near the intersection of North Avenue and Pennsylvania Avenue in Baltimore, Friday, May 1, 2015, the day of the announcement of charges against the police officers involved in Freddie Gray's arrest. State's Attorney Marilyn Mosby announced the stiffest charge, second-degree "depraved heart" murder, against the driver of the police van that Gray was in after his arrest. Other officers faced charges of involuntary manslaughter, assault and illegal arrest. (AP Photo/Patrick Semansky) (AP)
--

Elite pundits like Richard Cohen may expect zombie Richard Nixon to soon sweep the nation with a new campaign of law and order, but for those of us who see something more in America’s future than an endless rehash of the 1960s, the political ramifications of the uprising in Baltimore are still unclear.

Are we destined to live through another round of backlash politics, largely driven by white and affluent voters' fears? Or might the dysfunction and injustice that was so explosively revealed in Baltimore — and Ferguson before it — kick-off a rare bout of genuinely useful bipartisan cooperation?

Cynics will likely find these questions gratingly naive, but you don’t have to be a pollyanna to see reasons for optimism. After all, ending mass incarceration and reforming the criminal justice system were making their way into the political mainstream before anyone had heard the name Freddie Gray. And even conservative politicians like Sen. Rand Paul, a man some people (wrongly) consider a serious threat to be the next president, have been talking about these issues frequently and at length.

Well, I’m sorry to be the bearer of bad news, but although I think a return of “tough on crime” politics is unlikely, it still appears to me that a serious response to urban poverty and mass incarceration won’t be coming out of Washington any time soon. This useful Tuesday article from the Washington Post’s Greg Sargent helps explain why, but the answer can be boiled down to two words: demographics and location.

If you want to understand why Republicans in D.C. will ensure this problem goes unaddressed, you must start, as always, with the House of Representatives, where the GOP’s grip on power is white-knuckle tight. According to Sargent (via David Wasserman of the Cook Political Report) one way to think of the Republicans’ dominant position in Congress is to look at one of the usual explanations — the fact that Democratic voters are inefficiently packed into a smaller number of overwhelmingly Dem-friendly districts — from a new angle.

Viewed through the lens of land mass rather than population, Sargent reports, Republicans control nearly 86 percent of the United States, despite holding “only” 57 percent of the seats in the House. Democrats, on the other hand, lay claim to 43 percent of House seats yet only control around 14 percent of actual American land. As Wasserman explains to Sargent, what that means, in practice, is something you probably intuitively got already — in the House, the coalition that makes up the Democratic Party is very urban; and the Republican one, conversely, is not.

Put simply, the GOPers in the House whose constituents look like (or care about) the folks in Baltimore, Ferguson and so forth are few and far between. Most Republican members of Congress’s “lower” chamber represent people in rural or suburban areas. Except as a place they fear and prefer kept at a distance, these voters are not thinking about the American city. And even if they are, the fact that they’re Republicans will tell you all you need to know about whether they’d be open to a plan that involved increased social investment, as any bipartisan agreement no doubt would.

If you’re someone who believes politics is driven more by big, indifferent forces — like the economy or geography or demographics — rather than personal relationships, that would seem to be the end of the discussion. Politicians want above all else to be reelected, and they respond to incentives accordingly. It’s hard to see why a far-right representative of rural Kansas would be particularly interested in joining up with Nancy Pelosi to try to make it suck a little less to be an African-American kid in Jersey City. Someone so inclined probably wouldn’t even make it through their district’s GOP primary.

Still, as useful as that political science 101 framing can be in most cases, it is not all-seeing. At least that’s what someone trying to make a counter-argument would say, before pointing to the Senate. In the “upper” chamber, of course, Republican politicians have to worry about representing all of their state’s citizens. So you might expect a GOPer from Ohio (home of Columbus, Cincinnati and Cleveland) or Virginia (which shares a border with Baltimore’s Maryland to its north) to be more interested in reform. And that goes double for the next Republican presidential nominee, who will need to win some of those big, purple states in 2016.

Moreover, while politicians are often astonishingly simple-minded creatures, the same is not always true for voters. There are plenty of suburban moderates, for example, who don’t want to send a Democrat to Washington to represent their district but don’t want to have a Republican “eat-the-poor” ogre as president, either. Such voters shouldn’t be mistaken for true believers in social justice, mind you — but the desire to assuage a nagging sense of guilt by supporting a “compassionate” conservative can be a powerful thing. Pure self-interest, then, would lead a smart GOP presidential contender to support at least some elements of urban investment and reform.

But here’s the reason why I don’t expect that alternative scenario to play out in the real world, and why I suspect we won’t see a response to Baltimore from Washington — certainly not a bipartisan one — any time soon: Most of these elements were present during the 2012 election, but they had basically no influence on the behavior of House Republicans. Then-candidate Mitt Romney sure could have used some leeway to wander a bit from conservative orthodoxy and prove he was no real-life Mr. Potter. He got an Ayn Rand fanboy as his teammate instead.

It doesn’t feel like that was quite so long ago but, in political terms, America was a different place. This was before the lily-white Republican base had to endure two full terms of a relatively liberal African-American president, and before that same base had begun spending much of its time defending cops and describing poor communities of color as mired in a “tailspin of culture” and “government dependence.” This was when Darren Wilson was just another run-of-the-mill, mildly thuggish cop; and before "black lives matter" became a national slogan.

If the chances of congressional Republicans supporting a bipartisan legislative response to inequality were slim a few years ago, the likelihood of their doing so now, in the face of civil unrest, has to be right around zilch.