With six primary season debates, Clinton faces more than the zero she'd hoped for -- but fewer than she'd feared 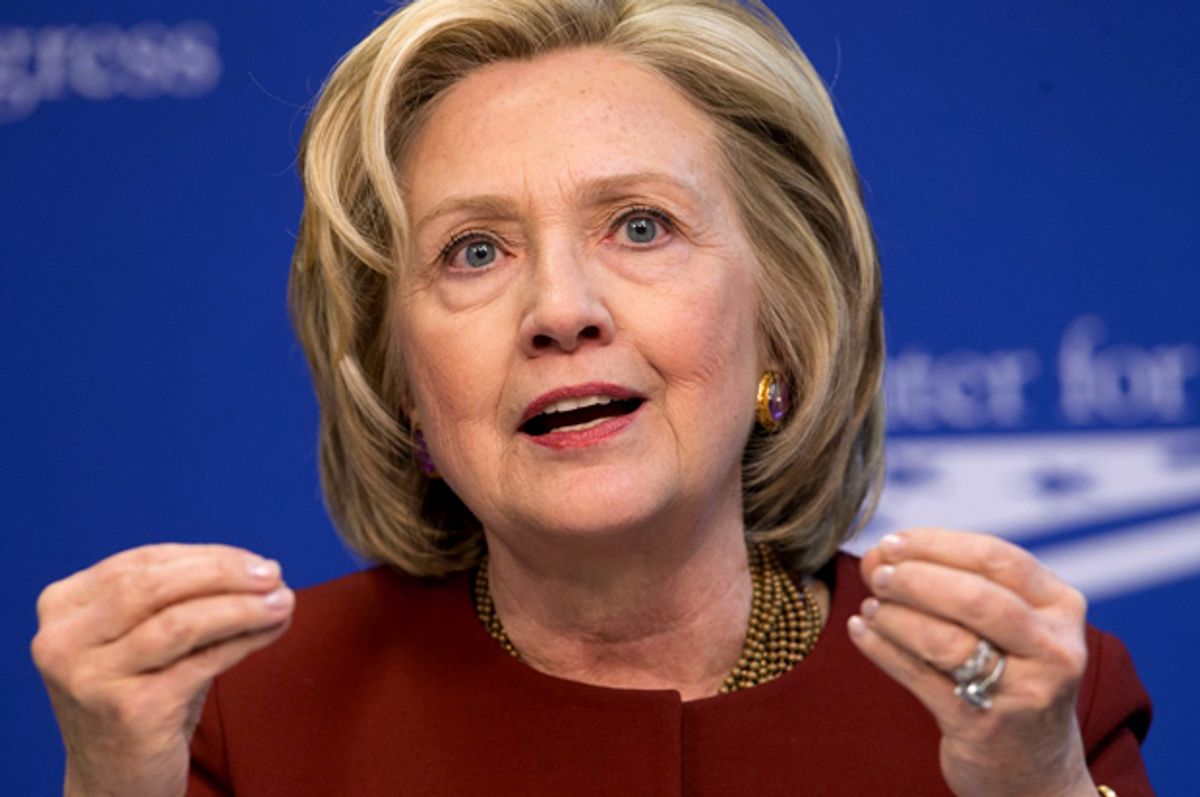 The Democratic National Committee finally announced its preliminary schedule for Democratic presidential debates on Tuesday. It will sanction six (6) debates beginning this fall. Iowa, New Hampshire, Nevada and South Carolina will each get one, with two more to be determined by some sort of geographical YOLO algorithm. The DNC will also adopt the RNC's enforcement mechanism: "Any candidate or debate sponsor wishing to participate in DNC debates, must agree to participate exclusively in the DNC-sanctioned process," the DNC's statement reads. "Any violation would result in forfeiture of the ability to participate in the remainder of the debate process."

Six debates, meaning Hillary Clinton will interact with her challenger(s) -- and the media -- for a grand total of six to nine hours over the course of the primary process. Any participation in black market debates will result in indefinite imprisonment in Debate Gitmo.

For whom is this a favorable schedule: Hillary Clinton or the field? Let's compare the reactions from the Clinton campaign and the campaign-in-waiting of one of her few likely challengers, Martin O'Malley.

From that fount of terse, occasional decrees, the Hillary Clinton Twitter feed:

And from Team O'Malley:

"If Governor O'Malley decides to run, we will expect a full, robust, and inclusive set of debates—both nationally and in early primary and caucus states," said O'Malley spokesman Lis Smith. "This has been customary in previous primary seasons. In a year as critical as 2016, exclusivity does no one any favors."

Makes sense. It's not unfair to describe the Democratic National Committee as an informal adjunct of the Hillary Clinton campaign. She is the establishment front-runner -- the most establishment-y front-runner there has been in the modern era in either party, really -- and the Democratic National Committee is quite literally the Democratic Party establishment. For all the public comments the DNC will issue about how it's hoping for an open, competitive, democratic nomination process, its job is to protect Hillary Clinton from being unduly tarnished ahead of the general election. I write none of this with malice. It's just the way things are! And given the way things are, if, say, Bernie Sanders gave Hillary Clinton a run for her money or even took the nomination, DNC Chair Debbie Wasserman Schultz would have a heart attack.

In its statement the DNC writes that "a six sanctioned debate schedule is consistent with the precedent set by the DNC during the 2004 and 2008 cycles." Well, not really. There were north of 10 debates in the 2004 cycle -- not all DNC-sanctioned, but this was before the DNC penalized candidates for appearing in non-sanctioned debates. And in 2008 there were 27 Democratic debates, according to National Journal. (OK, 27 debates was a bit much. One moment I distinctly remember was the weekend before the New Hampshire primary. The candidates debated Saturday night and again on Sunday morning. Ruining everyone's goddamn weekend! Sheesh.)

Six debates is not many debates and serves to the challengers' disadvantage. It's not that Hillary Clinton is a poor debater. It was actually one of her strengths against Barack Obama in 2008. I doubt she is terrified of Bernie Sanders or Martin O'Malley. But she doesn't want to give them any oxygen, either. Her challengers will benefit naturally from exposure on the same stage as Hillary Clinton. And the exclusivity clause is to prevent Martin O'Malley, Bernie Sanders, Jim Webb and whoever else from holding their own gathering in some college dorm room and asking WHERE'S HILLARY? SHE'S AFRAID.

It's good that the Clinton campaign will at least do these six debates, since it was reportedly considering not debating at all at one point. But the DNC's plan still favors Clinton, and Wasserman Schultz will face pressure to add extra debates if this competition gets closer than expected.