"Grace and Frankie": This thin "Transparent" knock-off pits gay men against older women, and nobody wins

Netflix's new series for Jane Fonda and Lily Tomlin feels like a disappointing retread of other, better shows 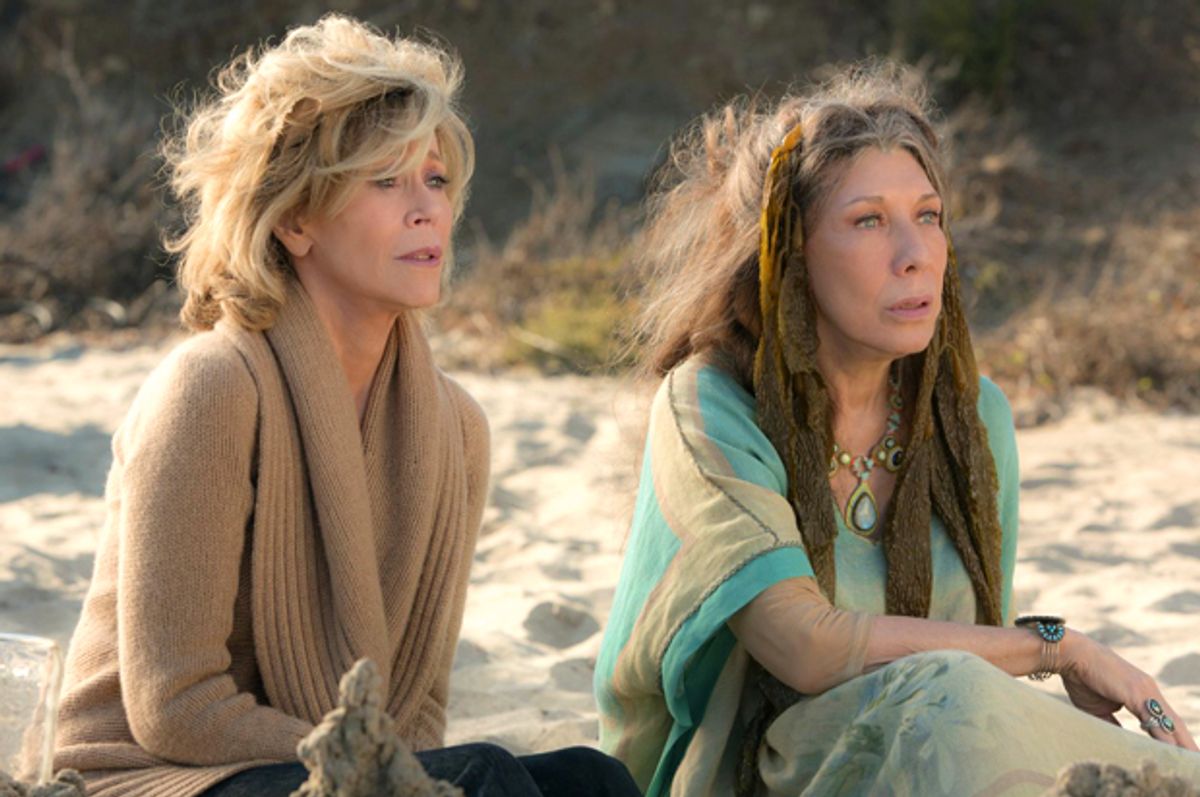 “Netflix’s “Grace And Frankie” was announced on March 19, 2014, just one month after the now award-winning “Transparent” debuted on Amazon Instant Video. The story follows two upper-middle-class women hovering around the age of 70 whose husbands come out as gay and announce they are divorcing their wives to marry each other; “Transparent,” if you’ll recall, centers on the story of a 70-something trans woman who comes out to her family and the world over the course of the first season. It also takes place in suburban Los Angeles, infused with the New Agey spirituality that is synonymous with California culture and a deep appreciation for the deserts and oceans of the southern part of the state. The shows find common ground there, too, sort of: The Grace and Frankie of “Grace And Frankie” own a beach house and take peyote together, while dancing around a bonfire. Here is some deliberate and imperfect imitation: Netflix saw that you watched “Transparent,” and girl does it have a Suggestion For You.

As maddening as that is on its own—Time’s James Poniewozik thoroughly engages with the question of what Netflix’s brand is, besides a network that replicates other successes, so well that I don’t have anything to add—it’s only part of “Grace And Frankie”’s problem. The show has a pedigree that should guarantee success: Jane Fonda, Lily Tomlin, Martin Sheen, and Sam Waterston make up the four main characters, each an industry titan in their own right. Marta Kauffman, who previously co-created the beloved NBC series “Friends,” is one of the showrunners, along with former “Home Improvement” producer Howard J. Morris. These are big, recognizable names, ones that I am very excited to see on-screen.

And yet I cannot in fairness really recommend “Grace And Frankie,” though to be fair, as a Netflix comedy, it’s a pretty low-commitment TV series. Also like so many Netflix comedies, the first half is probably not a great indicator of how the entire season will go—these shows tend to have a late-season shift that rewards binge-watching—but the studio only released the first six episodes to critics. It should be much better than it is, but the episodes I saw were struggling to nail down an appropriate tone.

Largely this is because “Grace And Frankie” wants to be about aging women, not about gay men. Kauffman told my colleague Anna Silman last week:

Once we knew that Jane and Lily were both interested, we had to come up with an idea that would be worthy of them because they’re both so extraordinary. I happened to be sitting in a car with a young woman who works for me. She’s my development executive. She’s the one who said, “What if their husbands fall in love?” We just jumped at that, we just jumped at it. We were so excited. It felt like the right [story] for this day and age.

The storyline of gay marriage was explicitly added after the fact, in a way that indicates, to be frank, a bit of worrying flippancy. It sounds like it was the right story for this day and age because it included a trend topic, not because it made the story richer.  As it translates to the story, the queer storyline in “Grace And Frankie” confirms those suspicions, because the show has trouble striking a consistent tone: It alternates between syrupy, inauthentic demonstrations of affection between Sol (Waterston) and Robert (Sheen) and more than one superficial joke about anal sex. (It doesn’t matter exactly how many, because one already feels like too many.) I can see what “Grace And Frankie” is trying to accomplish—a story that can mine both the humor and pathos out of an impossibly convoluted situation. But it only occasionally works. The premise is punchy, but that’s almost all it is; the show’s sympathies are so heavily slanted towards Grace (Fonda) and Frankie (Tomlin) that it’s hard to see the positivity in Sol and Robert’s decision. Instead the show, consciously or otherwise, pits gay men against aging women, which I don’t think anyone wants. It’s not until midseason that Sol and Robert start to feel bad about what they’ve done—which is lying to their wives for a very, very long time—in a tangible way. It’s only then that they begin to feel like real characters, instead of mean-spirited, self-centered man-children.

For example: In episode three, “The Dinner,” the men host a family get-together for their children, without Grace and Frankie. The children—some of whom have complex relationships with each other, in another storyline borrowed from “Transparent”—manage to maintain civility through dessert, but then Sol and Frankie’s son Nwabudike (Baron Vaughn) explodes with pent-up rage. He’s lied to his mother for the first time in his adult life to be here at this dinner, but he’s only putting up with the fact that his father cheated on his mother for years with a family friend because he’s gay—if they both had cheated with women, he posits, none of the children would be so supportive or present. Then he leaves, with the cake.

It is a lot—after all, it implies, uncomfortably, that historically oppressed groups now get super-special privileges, which is a convenient falsehood that bigots of all kind fall back on. But, weirdly, the moment also reads as one of the most authentic in “Grace And Frankie”’s early episodes, and I think that’s because it’s a rare moment where the show’s awkwardness and discomfort with Sol and Robert is finally out in the open. Grace and Frankie and “Grace And Frankie” do not like the husbands very much, but its premise makes it hard for the show to make them bad guys in any kind of cathartic way. I appreciate that the cake is subtle dig at the male leads—until Nwabudike’s outburst, they are having their cake and eating it too, by claiming, suddenly, that the world must conform to them; it’s not that they’re gay, it’s that they’re selfish. But I’m not sure that the rest of the show is able to find that nuance, and the cake scene barely does.

Indeed, “Grace And Frankie” is plagued by caricature. Some of that is the attempt to copy “Transparent,” which may have been handed down from on high; all of the drama involving the four leads’ children feels like “Transparent”-lite, even if Ethan Embry and Brooklyn Decker make for a surprisingly sweet onscreen pair. Some of that is the show’s lack of skill at telling the story of gay men in their 70s who have decided to come out of the closet. And some of that are the characters of Grace and Frankie themselves—broadly written characters that do not take advantage of the skill of either Tomlin or Fonda. Grace (Fonda) is a status-obsessed WASP who is terrified of losing her looks; Frankie (Tomlin) is a hippie dedicated to drugs, amateur shamanism, and vision quests. Neither is much more than either of those things. They do not like each other, because they are different from each other. Grace does not like that Frankie believes herself to be psychic. Frankie does not like that Grace is a buzzkill. What they do have in common, at this point, is a crippling fear of being alone together. It feels thin, especially at first. Over the course of the season, both characters grew on me, though—at least in part because the show gives them space to negotiate becoming friends with each other, to weigh the pros and cons of it, to quarrel and then reconcile. (In one particularly interesting episode, a whole section of their friendship’s evolution happens entirely in Grace’s imagination.) Their characters still do not feel particularly novel or real or interesting—or funny, sadly, which wastes both Fonda’s talent for physical comedy and Tomlin’s deadpan wit—but their friendship does eventually become real, which is something.

I found myself thinking that a lot of “Grace And Frankie” had been covered by Bravo’s “Girlfriends Guide To Divorce,” which similarly tackles the post-marriage life for aging women (although mid-40s, not mid-70s). The questions about online dating, finding direction without the foundation of a marriage, and the stubborn, frustrating details of divorce are all covered by that show, with both more humor and pathos. I like that show a lot. But that is part of the problem, too: Netflix keeps reproducing what it thinks I like, and the results can be thin, indeed.