For a lot of celebrities, the social media site has proven too much to handle 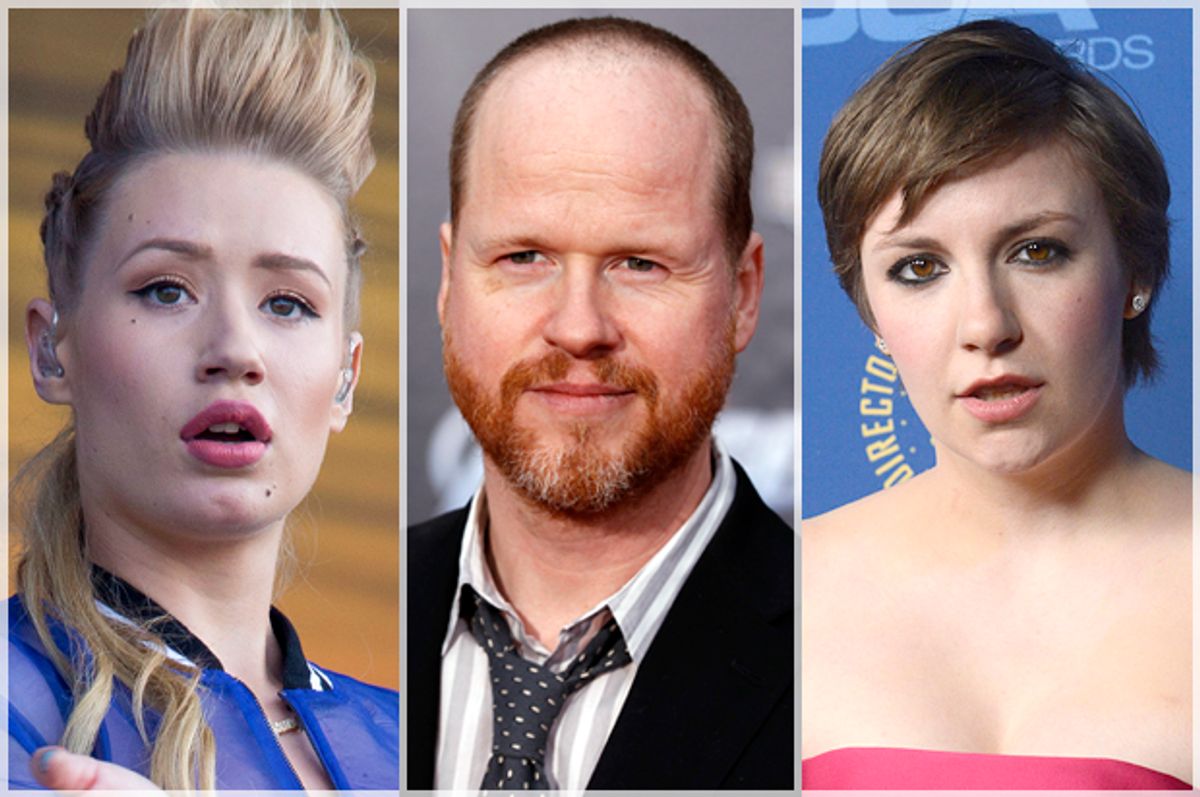 Twitter can be a stressful, toxic, hate-filled place, especially for celebrities whose private lives are already under the magnifying glass to begin with. This week, "Avengers" helmer Joss Whedon announced he was leaving Twitter — not because of feminist trolling, as many first suggested — but because he simply couldn’t get any work done with all that noise.

As he told Buzzfeed: "I just thought, Wait a minute, if I’m going to start writing again, I have to go to the quiet place. And [Twitter]is the least quiet place I’ve ever been in my life … It’s like taking the bar exam at Coachella"

Whedon is in good company; Increasingly, celebrities are fleeing the fast-paced, outrage-fueled social media site in search of a little offline peace and quiet. Here’s a look at other reasons stars have given for bidding Twitter adieu (although, for what its worth, most of the quitters couldn’t stay away for long).

1. Lena Dunham
The oft-attacked “Girls” star — who is back on Twitter now — told Ryan Seacrest that she abandoned the social media site because she needed to create a safer space for herself:

"I deleted Twitter because I’m trying to create a safer space for myself emotionally. People like, threaten my life and tell me what a cow I am. So I decided I was gonna ... I check it occasionally, but it isn't the same co-dependence Twitter and I once shared. It’s the dark side of the internet. There's a lot of people I love on Twitter, but unfortunately you can't read those without reading deranged Neocons telling you you should be buried under a pile of rocks.”

2. Minnie Driver
After a string of hateful comments about her body, the actress announced that she too was leaving the site.

"God some people are horrible: you try being photographed when you don't know it's happening, when you're on holiday with your kids. I'm out of this Twittersphere for a while. It's too mean sometimes, about your body , about your soul. Not worth it."

3. Iggy Azalea
Controversial rapper and Twitter beef queen Iggy Azealea also cited body-shaming as a reason she was decamping from the site:

"Just got back from a great vacation, came online and saw apparently it's shocking and unheard of to be a woman and have cellulite. Lol. I just want to have peace and relaxation time without a perve with long distance lense hiding out taking pictures, everyone deserves peace.I feel the hatred and pettiness i see online at all times is at making me become an angry person and I cannot be that. But I also want to let my fans know iam taking some time away from social media. I need to be happy and it is too negative and draining.”

4 Sinead O’Connor
The Irish musician, who had often used Twitter to speak about her mental health issues, quit the site after announcing:

“Twitter is sadly not safe for people who do what I do for a living.”

5. Nick Offerman
In a very Ron Swanson move, the “Parks and Rec” star extolled the virtues of a less plugged-in life:

"Twitter was a mistake. I'm leaving it behind and going outside to look at nature, then use my hands to make something. Join me. Goodbye."

6. Megan Fox
The “Transformers” star fled the coop only a week after joining.

“Some of you may, or may not have noticed by now that my Twitter account has been shut down. I thought that 2013 might be the year I finally blossomed into a social networking butterfly… but as it turns out I still hate it. Love you guys but I can never be that girl. Facebook is as much as I can handle.”

7. Jason Segel
Burritos were the impetus for Jason Segel’s exodus. As he put it at a New York screening of his 2014 film “Sex Tape:"

“I realized that’s not a power I want to wield. At one point, at 3 a.m., I was deciding between eating a sandwich and a burrito, and I ate a sandwich. It was delicious, and I tweeted, Sandwiches are better than burritos. And then there was a firestorm of debate. People hated me: You don’t know about burritos, they’d say. I decided that was too much responsibility for me.”

8. John Mayer
Much like Whedon, John Mayer found that Twitter impeded his creativity. During a talk with students at Berklee College of Music, he spoke about his decision to leave the site.

“The tweets are getting shorter, but the songs are still 4 minutes long. You’re coming up with 140-character zingers, and the song is still 4 minutes long…I realized about a year ago that I couldn’t have a complete thought anymore. And I was a tweetaholic. I had four million twitter followers, and I was always writing on it. And I stopped using twitter as an outlet and I started using twitter as the instrument to riff on, and it started to make my mind smaller and smaller and smaller. And I couldn’t write a song.”

9. Jennifer Love Hewitt
After receiving threats and hateful messages during her pregnancy, the actress also decided she had had enough.

"Unfortunately with all the negativity people choose to send on Twitter as well as threats to their own well being, I'm sad to say Twitter is no longer for me. I have enjoyed all the kindness and love that came my way, as well as support. But this break is needed."

“I used to tweet but it's an act of futility. You're not really making any impact. It might be a great promotional tool but just to make small talk, it's crazy.”

11. Keira Knightley
“It made me feel a little bit like being in a school playground and not being popular and standing on the sidelines kind of going, 'Argh,’"

12 Alec Baldwin
Baldwin has had a tumultuous relationship with the social media site, and with the media in general, quitting Twitter for the third time in 2013 after defending his wife from trolls (he rejoined soon after). Here’s what he told Vanity Fair in 2013:

"I went to Jimmy Gandolfini’s funeral, and when I was there I realized Jimmy Gandolfini didn’t have Twitter. Jimmy Gandolfini was so beloved as a person, and he was so admired as an actor, and he didn’t give a fuck about social media. I really learned a lesson at the funeral. I said to myself, This is all a waste of time. Meaning it’s fun sometimes, but less and less, and less. It’s just another chink in your armor for people to come and kill you. I stopped and said to myself, I’m going to try where I just don’t do this anymore."

13 Louis CK
On a taping of SirisuXM’s Opie Radio, Louis CK —who famously attacked Sarah Palin in a vile rant back in 2010 — explained why he left the site.

"It didn't make me feel good. It made me feel bad instead. So I stopped doing it. Any time I tweeted anything I was like, 'Ugh don't like the way that came out.' And then four and a half million people saw it! It was the worst things I ever said, heard and seen by the most people. It's the worst possible scenario….It's too instant, I don't think the speed helps dialogue. I think it's why everything is kind of fucked up and polarizing, because people are going too fast, they're trying to react too quickly."

14. Chrissy Teigen
After getting attacked over a controversial Tweet about the Ottawa shooting last year, Teigen decided she had had enough (although she would soon be back and tweeting up a storm).

"I can't see anything through the sea of hate and anger that is now my Twitter. Seriously I can't sift through it all. I feel sick. Bye Twitter. Taking my talents to instagram."

15. Demi Lovato
Lovato has fled Twitter a few times, most recently back in 2013, when she felt that gossip sites reinterpreted some tweets she wrote about trust.

“I don't get how people get "stories" from very vague twitter posts... About friendship.....?? Blehh. I really love my fans but I hate gossip sites... Gonna take a breather from twitter.. I love y'all! ❤”

16. Simon Pegg
The British comic took the tried-and-tested 'it's not you it's me' route when calling it splitsies with the site last year:

“I haven’t been enjoying it for a while now. There hasn’t been a specific incident and the reasons are various. Ultimately, I think we’ve just grown apart. What I’m saying is, it’s not you, it’s me.

17. Lily Allen
The British pop singer quit Twitter in 2009, as well as giving away her Blackberry and laptop. In 2014, she once again expressed desires to unplug, writing:

"Let's give up social media. It's killing me. That is all. I feel like we're not evolved enough to handle the internet psychologically. I preferred real records and newspapers with news in them. And everything was just better and nicer. We were nicer. And I wouldn't be here. Might sell my twitter right now."

18. Patton Oswalt
Oswalt is back on Twitter now, but the comic took a summer-long hiatus  from the sitelast year. On his Facebook page, he explained that he was taking the time off to "de-atrophy" muscles he used to have.

"I’ve become my own tyrant. Tweeting, and then responding to my own responses, and then fighting people who disagree with me. Constantly feeling like I have to have an instant take on things, instead of taking a breath, and getting as much information as I can about the world.”

In 2009, Miley Cyrus shared a rap on YouTube detailing her decision to leave the site.

2o. Ricky Gervais
Shortly after leaving Twitter because it was "pointless" back in 2011, Gervais returned with a vengeance.

“As you may know I’ve stopped with Twitter. I just don’t get it I’m afraid. I’m sure it’s fun as a networking device for teenagers but there’s something a bit undignified about adults using it. Particularly celebrities who seem to be showing off by talking to each other in public. If I want to tell a friend, famous or otherwise what I had to eat this morning, I’ll text them. And since I don’t need to make new virtual friends, it seemed a bit pointless to be honest.”