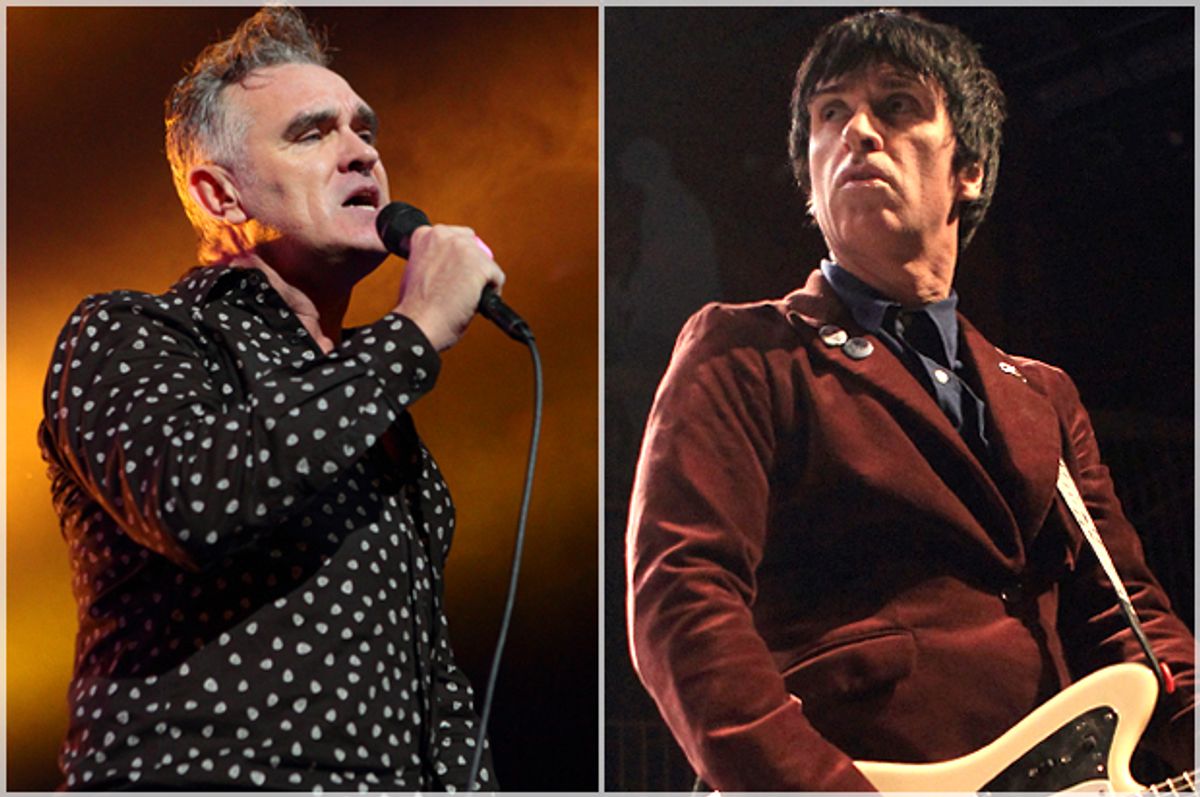 I love the Smiths. That's why I don't want them to reunite.

Let me preface this piece by establishing that I am a huge fan of the Smiths and have been for more than two decades now. When I was in high school, I hung a poster of frontman Morrissey over my bed, and I also plastered my college dorm's walls (and door) with his photos. The Smiths' "Best...I" album was the soundtrack to a major surgery I had in 1994; I vividly recall listening to a dubbed cassette of the record while convalescing in the hospital. My first email addresses were a variation on the song "Hand In Glove," and I stood in line way-too-early on a Saturday morning at a local grocery store to buy tickets for Morrissey's 1997 tour. My fandom hasn't waned as I've grown up, either: I've traveled for hours to see Morrissey and guitarist Johnny Marr play (separate) concerts, and I once flew cross-country because I wanted to see Moz play a show in Los Angeles with the rest of his most rabid fans. And despite show cancellations and delays in recent years, I still frantically refresh Ticketmaster for Morrissey tickets during venue pre-sales every time he announces a tour.

Logic says I should be the exact type of fan clamoring for Morrissey and Marr to patch up their differences, take the oft-rumored Coachella offers and do a concert under the name the Smiths, something they haven't done since late 1986. But I'm not interested in a reunion, and really never have been--even though reformations by the Afghan Whigs, the Replacements, the Breeders and Ride have been must-sees for me. On some level, it's because my fandom of those bands, while solid, has never reached the level of devotion I have for the Smiths. Yet on another level, I don't want the associations I have with them to be tainted by any subpar second act. Reunions in general never live up to preconceived notions or expectations, which is often a good thing: A band returning to the stage fired up to extend and reshape their legacy is a beautiful thing. But I've been burned before seeing veterans back at it again (an off-key, mumbling Jesus and Mary Chain show I walked out on a few years ago comes to mind). The potential of having my Smiths memories blemished is not something I want to risk.

In part this is because I initially became a Smiths fan in the early '90s, well after they broke up. As a result, they were always flawless to me, crystallized in time as this perfect group that influenced music and culture for a brief, fleeting moment. Certainly my mindset was colored by the adolescent tendency toward idealization. However, the band's music resonated with me for the same reasons it appealed to so many other people: The Smiths' lyrics acutely captured the experience of being awkward, imperfect and (seemingly) unlovable, but did so in dramatic ways that oozed empathy, not pity. Morrissey's conspiratorial croon--which veered from a weary low register to hysterical falsetto--conveyed the romance of being a misfit; being alone and untouchable wasn't a flawed state, but something to embrace, a badge of honor. Plus, so many of their lyrics also involved keeping secrets or sneaking off for clandestine dalliances, something else that delighted me, seeing as I was someone who kept sporadic diaries and relished having hidden thoughts that were all my own.

As a whole, these sentiments meant so much to me as a teenager, and got me through some agonizingly painful moments. Yet my relationship with the Smiths' music has changed over time. I still know every nook and cranny of songs such as "Stop Me If You Think You've Heard This One Before," "The Queen Is Dead" or "This Charming Man"  — they're like old friends to me — and they sound no less powerful now than they did back in the day. But hearing them now makes me happy, not melancholy. I reach for their music when I'm looking for comfort and familiarity, not as a refuge from loneliness. And I'm perfectly okay with this shift, and leaving the more cringe-worthy memories in the past; in fact, I'd rather not dredge up the days when I'd tear up while listening to "Hand In Glove" on repeat. A Smiths reunion has the potential to be a similarly disorienting (if not slightly disingenuous) experience, an attempt to recapture a time period and state of mind that no longer exists.

Plus, it's not like I can't already see Smiths songs performed live by actual members of the band. Marr has thrilled fans by performing a smattering of tunes during his solo shows — and, really, there's nothing like seeing him play guitar on "Bigmouth Strikes Again" and "How Soon Is Now?" — while Morrissey too rotates select Smiths songs in and out of set lists in between choice cuts from his own solo career. But while both men keep the Smiths' memory alive during their concerts, their relationship to the music has also changed. Marr approaches Smiths songs with vim and vigor that borders on toothy punk rock, while Morrissey's take on a tune such as "Meat Is Murder" is even more incisive now, thanks to his talented band and pointed, inflammatory videos.

More important, these nods to the past are always interspersed between new music: Unlike other '80s acts, their concerts aren't a trip back in time, just momentary glimpses at the past. That's also a good thing. Marr's concerts reflect his two fine recent solo albums: They're jubilant, and full of energetic, wiry rock & roll. Morrissey, of course, covers very similar lyrical ground to which he's always tread, but remains a consummate showman who is enigmatic, debonair and dryly funny. Creatively and professionally, neither man needs a Smiths reunion, nor seems to want one. "If people get genuinely upset and frustrated that four men that last played together 25 years ago are doing other things, then those people need to go and find a hobby," Marr told The Japan Times. "They really do. If the band only split up two years ago it might be a different matter, but 25 years? Come on. It’s a long time. If you like The Smiths, the records, photographs and memories are all plenty to be getting along with.”

In light of so much vocal opposition, there's no way a reunion could be seen as anything but a blatant sellout or a cash grab, two things antithetical to the principled nature of the Smiths, as well as their status as ambitious outsiders. Crass commercialism and consumerism are things Morrissey has always seemed to despise; why should he embrace them now, and risk the wrath of his loyalists? Moreover, after all this time, what would be the point of a Smiths reunion? It would no doubt provide a financial windfall, but historically, that's not a motivating factor: In fact, they've turned down massive amounts of money, including a reported $75 million less than a decade ago, for a reunion.

Sticking to their guns and refusing to cash in on nostalgia makes me admire Morrissey and Marr that much more than I already do. Although this lack of a reunion has had many root causes — anything from stubborn pride and interpersonal animosity to pure lack of interest — it's also the ultimate sign of respect for the Smiths' legacy, and to the band's fans, to leave the past in the past. The Smiths were always meant for those who didn't identify with prevailing cultural trends. That they've refused to follow the rest of their peers and get back together aligns perfectly with their principles, and ensures that faithful supporters won't be disappointed by any sort of reputation-damaging return.