Punched, groped, beer thrown in my face: Being a woman at a concert can be terrifying 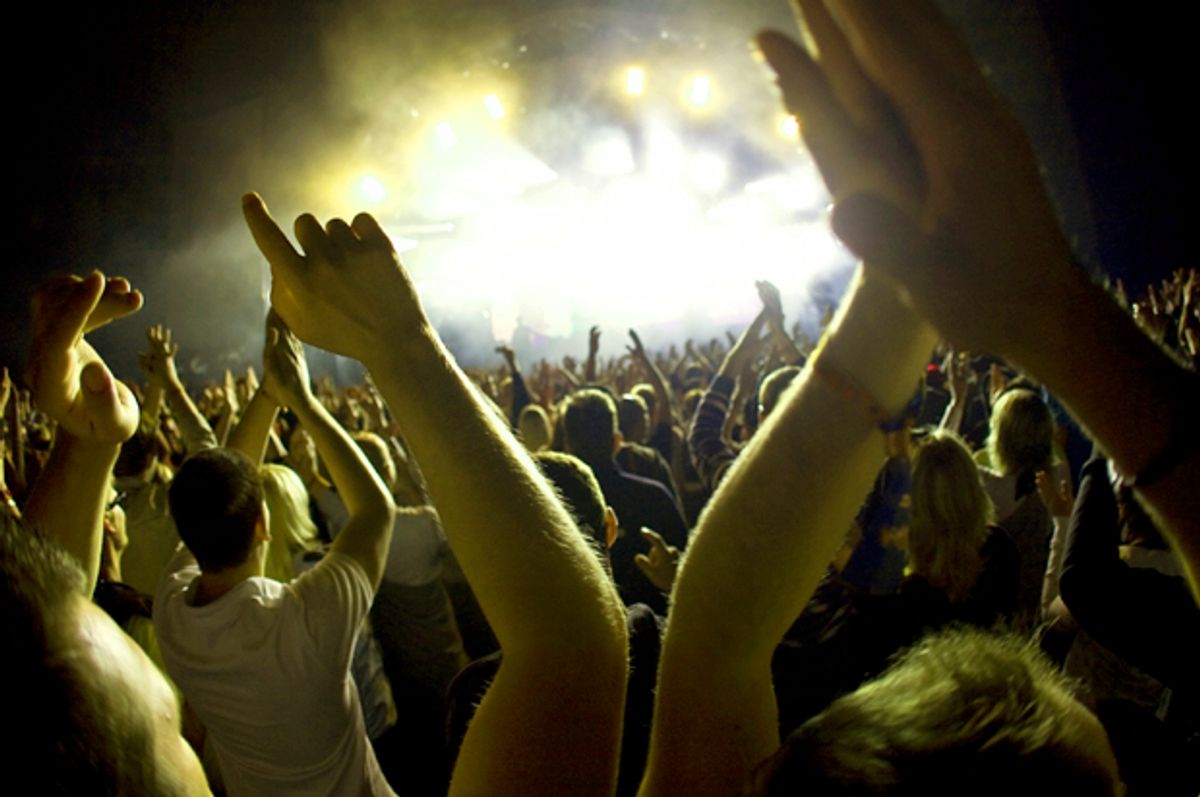 A few weeks ago, as I stood in line to buy beer at a Josh Abbott Band concert in Thackerville, Oklahoma, I noticed that a group of drunk frat boys had decided to cut in front of me. The beer line was exceedingly long, and there was no way that I was waiting even longer for this group of bros to slur their order at the bartender. As soon as a space opened, I quietly stepped back in front of them and waited to order my beer. As soon as I did, one of the guys in the group yelled, “Back of the line, you fat cunt!” before physically charging at me and threatening violence until a security guard broke up the kerfuffle and sent the offending bro back into the massive (and rowdy) crowd to calm down.

In the nearly 10 years that I have been attending and reviewing live music, I have been punched, groped and had beer thrown in my face. I have snuck out of shows early to escape the aggressive advances of a man who just wouldn't take no for an answer. I have watched and intervened as men tried to take advantage of falling-down-drunk women who could barely keep their eyes open. I have seen artists make sexually inappropriate remarks about me and other women from the stage. Unfortunately, my experience as a woman in music is not unique.

To be female and a fan is to be in a pretty precarious position pretty much all of the time. Depending on the genre you enjoy, male fans who share your interests might call you a “poser,” or insinuate that you’re not as punk or metal or hip-hop (or as whatever) as you claim to be. They will mansplain your favorite genre to you, even if you’re a scholar. Most important, though, the dangerous and unpredictable nature of concert culture means that it is often entirely unsafe to be a woman in a dark, crowded music venue.

Most women who frequently attend live shows will tell you that they have been harassed, groped or assaulted as they listen to their favorite bands. A standing-room-only show, when you’re wedged into a massive crowd fueled by beer and testosterone, is particularly scary. There seems to be a spectrum of violence that women experience at live shows, ranging from misogynist verbal harassment to sexual assault. Sometimes, it means being called a “fat bitch” by a guy who wants to cut in front of you in line at the bar. Other times it involves being forcefully shoved across a raging mosh pit by someone three times your size, or being touched inappropriately as you try to crowd-surf. These may seem like harmless little interactions, something that should just be expected in a rowdy crowd. But every time one of these acts of violence occurs, in their varying degrees of severity, it has the same effect: making women feel scared or vulnerable as they enjoy the bands that they love.

In the past few years, there have been a torrent of stories in the news in which women are abused, assaulted or raped at live shows. Earlier this year, video surfaced of Afroman decking a woman who jumped up on his stage to dance. Last year, Tim McGraw slapped a fan who grabbed his leg across the face. Even though the actions of both of these women were completely unjustified, the artists responded with violence. In the experience of many female fans, the men whom they share space with at shows can cross that line, too.

Many women who enjoy music, especially rowdy, loud genres like heavy metal, have come to expect a certain level of violence at the concerts they attend. Metal expert and weekend editor of VICE’s Noisey, Kim Kelly, is particularly used to being banged up at the end of a show. “If I'm at a death metal show or a DIY thrash show in a basement, I know things are gonna get crazy, bottles are gonna fly, and I'm probably going to come home with a few bruises,” she says. “I've always been able to hold my own, but women who are smaller or less brash than I am might absolutely feel intimidated by the testosterone-fueled violence. In my experience, if you don't want to get hurt, you stand in the back or on the side, and keep your guard up.”

Outside of this expected level of physicality in the mosh pit, rape and sexual assault are on the rise at concerts. Last year, a Keith Urban concert that spun out of control, with reports of attendees hospitalized for intoxication ranging from 20 to nearly 50, included the arrest of an 18-year-old who authorities alleged raped a 17-year-old in the crowd while onlookers took photos and video on their phones. While the girl reportedly told police and witnesses she did not consent, the charges were later dismissed. But similar reports from major music festivals are almost commonplace, including Stagecoach, Electric Zoo and Philadelphia’s Made in America, and those are just from 2014. Just last week, a woman reported being sexually assaulted by an unidentified assailant in a restroom on the University of Oregon campus during a Jason Aldean performance.

Even when the violence doesn’t escalate to the level of rape, unsolicited touching and aggressive come-ons from drunk musicians and fans alike is all too common. Also last week, Chicago-based punk writer Lorena Cupcake shared her experience of being groped and harassed by a drummer at an Austin, Texas, show. When she rejected his advances, the drummer called her a “cunt” and a “poser,” as his friends held him back from physically engaging her. She feared for her safety, and contacted the bar’s management, who profusely apologized.

Of her experience, Lorena Cupcake makes it a point to note that this is not something that happens to men at concerts. “People have difficulty believing that women and trans individuals pursuing traditionally male activities are doing it authentically, for our own reasons,” she wrote at Store Brand Soda. “Our motives are cast as disingenuous; we’re called groupies, posers, and hangers-on. Male dominance is established by questioning our right to be there at all.”

At this point, it is difficult to ignore that there are serious cultural issues when it comes to the world of live music, but who exactly is responsible? Is it concert venues, who are perhaps more focused on selling overpriced beer and cocktails to patrons? Is it the artists, who are occasionally responsible for the abuse themselves, or at least for fomenting it? Or is it the fans who have the largest hand in making sure that women feel safe while attending live shows?

In reality, it’s all of the above. Venues can implement a number of procedures to make shows safer for women, like adding barricades to mosh pits and increasing security presence in the crowds, but it’s still difficult to control what happens in the middle of a frenzied show. As for the fans, well, it’s probably unrealistic to ask that they keep their hands to themselves and quietly enjoy the music. Ultimately, it is the artists who have the most responsibility and the greatest ability to ensure that the environment their music cultivates is not inherently aggressive toward women.

In fact, they should be using their positions to outwardly do everything they can to ensure that these shows are safe for female concertgoers. From Kelly’s perspective, that has everything to do with encouraging fans to just look out for one another instead of inciting violence. “Coming from the metal world, it's very, very common to hear bands onstage encouraging fans to beat each other's asses. The Wall of Death is still popular!” says Kelly. “If someone falls, pick them up; don't grab women; look out for people smaller than you are. That's all part of the unwritten code at metal shows, but at bigger mainstream rock concerts, it seems like things can devolve into more of a free-for-all, booze-fueled orgy of violence and bad judgment pretty easily.”

Some artists have made very public statements against this type of violence, which is certainly a step in the right direction. At a show last year in Kansas City, Staind frontman Aaron Lewis stopped his performance to help a girl who was being physically assaulted as she crowd-surfed. Country artist Jake Owen also stopped a performance in Fort Wayne, Indiana, after a man punched a young woman in the face. Considering the prevalence of assault at live shows, though, these interventions are exceedingly rare, and many times impossible for the performers to even pull off — from up onstage, you can't always see what's happening in the crowd.

It doesn’t seem like too much to ask that the women who are just as much a part of these respective scenes -- we buy just as many records, concert tickets, and band T-shirts as men, and are equally supportive of our favorite acts  -- not feel physically intimidated when they’re out at shows. In New York’s hardcore scene, bands like the recently reunited Kill Your Idols make it a point to cultivate “positive mental attitude” at their shows and address inequities in their scene, proving that it is possible for these safe spaces to exist without compromising the rowdy vibe that is expected of hardcore punk.

Until we address the systemic issues that drive this violence, though, like rape culture and the nonsensical idea that women have to somehow “earn” their place as legitimate music fans, it is likely that even that wouldn’t be enough to make live music a safe and positive experience for women. Still, hearty encouragement from the acts onstage and the venues that host them would be a really helpful start.