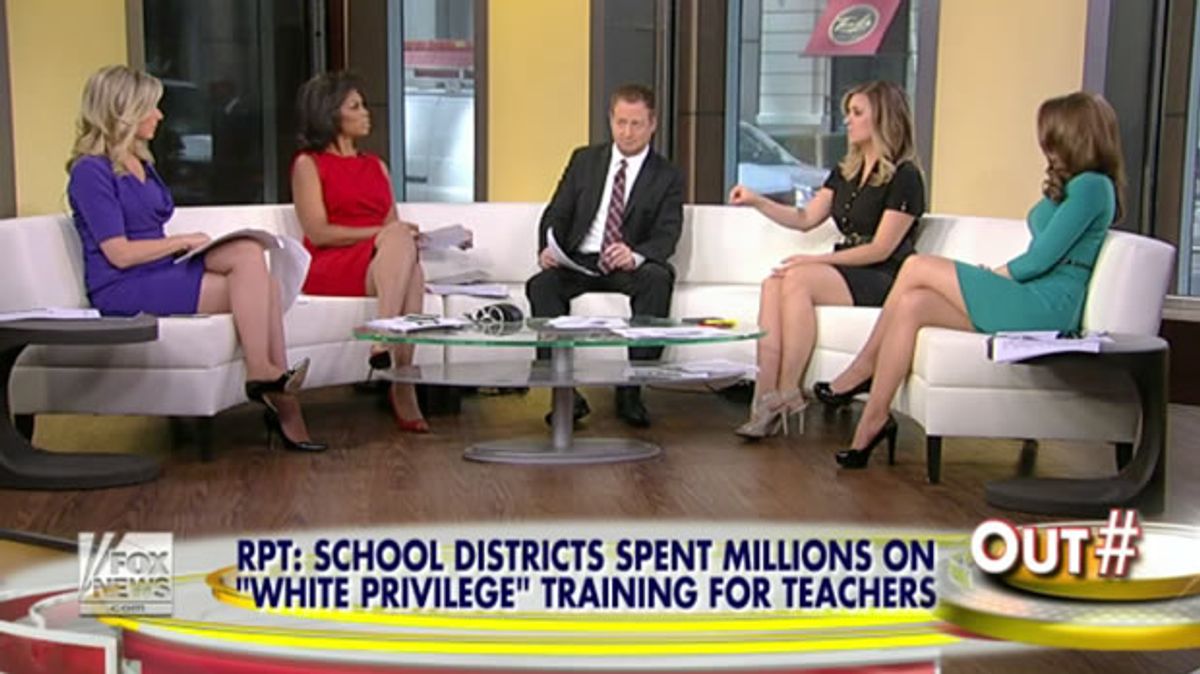 On "Outnumbered" this afternoon, the "ladies" and "#OneLuckyGuy" Andy Levy had a very confused discussion about a diversity training program for teachers that has been used in a number of school districts across the country.

According to Gunn, "the organization teaches that black kids are less likely to respond to fundamental ideas like working hard to achieve success, or being on time for school or work, because those ideas are supposedly foreign to African-American culture."

Faulkner and her co-hosts were understandably incensed by this inaccurate explanation of the work PEG does to help teachers understand "institutionalized racism and its impact on student learning."

Co-host Jedediah Bila complained that liberals are always demanding more money for the school system for programs "like this, and kids can still come out and not know how to read or write." She argued that not all white or black students are the same, and that they come from different households and backgrounds -- which is exactly the kind of understanding that the PEG programs encourage teachers to develop.

Faulkner noted that Baltimore was among the school districts that participated in the PEG program, and asked whether learning about different cultural and ethnic backgrounds "doesn't divide us more as a nation."

Andy Levy questioned whether white privilege even existed, and read from the EAGnews.org article's summary of the PEG program:

PEG teaches that minority students don’t do as well as white students on the average because traditional American education is structured around white cultural norms, which are frequently difficult for minority students to grasp.

Reasonable people might see value in that idea. It makes sense for teachers and other educators to be more aware of the various cultural influences and traditions that shape the mentality of their students.

Levy said that he agreed with that -- but not with the elements listed in the inflammatory summary of the PEG program presented earlier in the article, which Faulkner read aloud earlier in the segment. "That stuff is insane," he said, "and should be gotten rid of."

But Faulker objected to all of it, saying that "recognizing different cultures and treating people differently -- I thought our culture was American!"

"That's the problem," Townhall's Kaite Pavlich interjected, "specifically in Baltimore, [where] one of the major complaints with the protests and the riots is that there is not a connection between the school districts and police to the African-American community. When you're teaching in schools that disconnect -- promoting that disconnect -- how can you expect there to be any kind of understanding."

Pavlich failed to acknowledge that PEG doesn't offer seminars for students, but for teachers -- or that the purpose of those seminars is not to foster a wider divide between the teachers and their wards, but allow the former to better understand the daily challenges the latter face.

Watch the entire "Outnumbered" segment below via Fox News.