GOP's gay marriage dilemma: Concede to reality, or go all in on bigotry?

Fight? Flee? Go crazy? 2016 Republicans are struggling with how to respond to the end of same-sex marriage bans 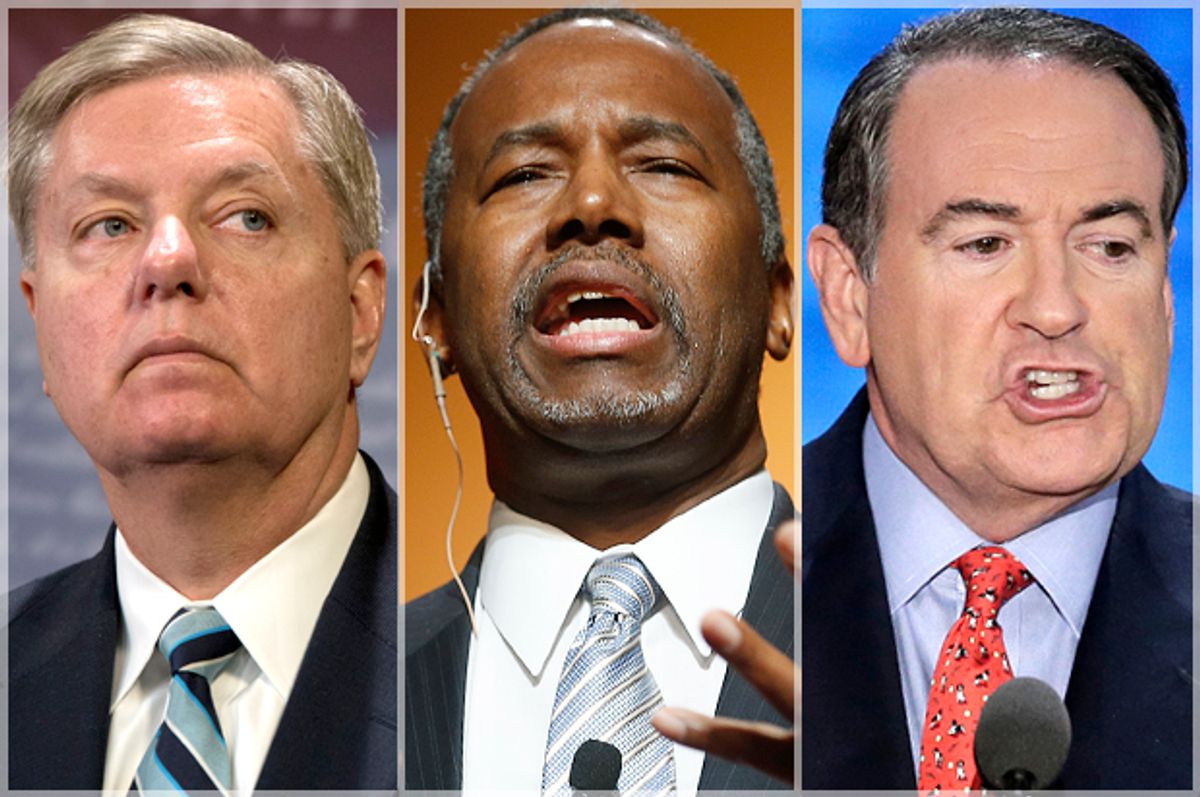 Next month, the Supreme Court will hand down a ruling on whether state-level same-sex marriage bans are constitutional, and whether states must recognize same-sex marriages from other states. Predicting how the justices will rule is an uncertain and ultimately pointless endeavor, but after oral arguments last week, it appears likely that the high court will end up striking down the gay marriage bans. That would represent a huge step forward for gay rights, and the 2016 Republican candidates are split on how they’d react to such a ruling.

Right now there are a few factions within the group of Republican presidential wannabes that are jockeying for position. The first is the “respect the rule of law” faction represented by presumptive candidates John Kasich and Lindsey Graham. Neither seem particularly enthused at the prospect of fighting yet another drawn-out battle over gay marriage, probably because public opinion has swung overwhelmingly in favor of marriage equality over the last decade. And so rather than dig in and make a last stand, they’re encouraging Republicans and conservatives to accept the court’s decision if they strike down the bans.

“I'm for marriage being defined as between a man and a woman,” Kasich said last week, “if the Supreme Court changes that, those changes have to be respected.” Graham was even more direct, saying that this is just where society is going and that it’s pointless to fight the inevitable. “Things are changing, so at the end of the day, being for traditional marriage without animosity is where I stand,” he said on Monday. “If the Supreme Court rules sometime this year that same-sex marriage bans are unconstitutional, then that will be a defining moment in that debate. It will be time for us to move forward as a society.”

Representing the more activist strain of 2016 Republican thinking is Sen. Ted Cruz. If the justices do strike down the gay marriage bans, Cruz wants Republicans and conservatives to use every tool at their disposal to fight back against the “lawless” and “fundamentally illegitimate” actions of the high court. This includes a proposed amendment to the Constitution that would leave all marriage decisions exclusively to the states, and a more exotic proposal to have Congress “strip federal courts of jurisdiction” over same-sex marriage issues.

And then there are the aimless dead-enders – the candidates who think that the Supreme Court can just be ignored if it rules that same-sex marriage bans are unconstitutional. This faction is represented by two of the newest entrants to the race: Mike Huckabee and Ben Carson.

Let’s start with Carson, since he at least offered something approximating a justification for why elected officials wouldn't have to adhere to a Supreme Court ruling. Speaking to Newsmax, Carson laid out his view of the Constitution, which allows for the president to simply ignore the courts:

“The president is required to carry out the laws of the land, the laws of the land come from the legislative branch,” Carson explained. “So if the legislative branch creates a law or changes a law, the executive branch has a responsibly to carry it out. It doesn’t say they have the responsibility to carry out a judicial law. And that's something we need to talk about.” Yes indeed we should talk about it, because it’s not entirely clear what the hell he’s talking about.

The Supreme Court isn’t making a “law” here – it is deciding whether specific laws passed by state legislatures pass constitutional muster. The courts have well-established “authority to enforce—or void—statutes when disputes arise over their scope or constitutionality.” But let’s take Carson’s theory of a chief executive unbound by the judiciary and apply it to a hypothetical counterexample. Let’s say the Supreme Court had in fact thrown out the Affordable Care Act as unconstitutional in 2012, but President Obama said “nope, sorry, Congress passed the ACA, and I don’t have to respect ‘judicial law,’ so Obamacare stays.” Ben Carson and others would have (rightly) called him a dictator.

Lastly, we come to Mike Huckabee. In his speech announcing his candidacy, Huckabee went full hammer-and-tongs against the court, saying outright that its authority cannot overtake that of (Christianity’s) God.

HUCKABEE: We are now threatening the foundation of religious liberty by criminalizing Christianity and demanding that we abandon biblical principles of natural marriage. Many of our politicians have surrendered to the false god of judicial supremacy, which would allow black-robed and unelected judges the power to make law as well as enforce it, upending the equality of our three branches of government as well as the separation of powers so very central to the Constitution. My friends, the Supreme Court is not the supreme being, and they cannot overturn the laws of nature or of nature’s god.

It’s not clear what Huckabee intends to do in the event that the Supreme Court decides it’s bigger than Jesus, but he clearly thinks the court isn’t legitimate. I mean, he’s questioning the supremacy of an institution with “Supreme” in its name.

Neither Huckabee nor Carson will win the presidency, but it’s interesting to see their reactions and compare them to the more pragmatic candidates in the Republican field. Gay marriage has become a battle that more and more Republicans are unwilling to fight with much enthusiasm. The candidates who seem willing to die on this hill are the ones who know that their appeal is largely restricted to the GOP’s Christian, conservative base. So they’re left to bang the lonely drum against gay marriage as the rest of the political world, and society, leaves them behind.