Joss Whedon is right: Twitter is a loud, shallow waste of time — and I'm leaving, too

I'm not a celebrity — I'm a Twitter celebrity. But the retweets and faves don't do it for me anymore 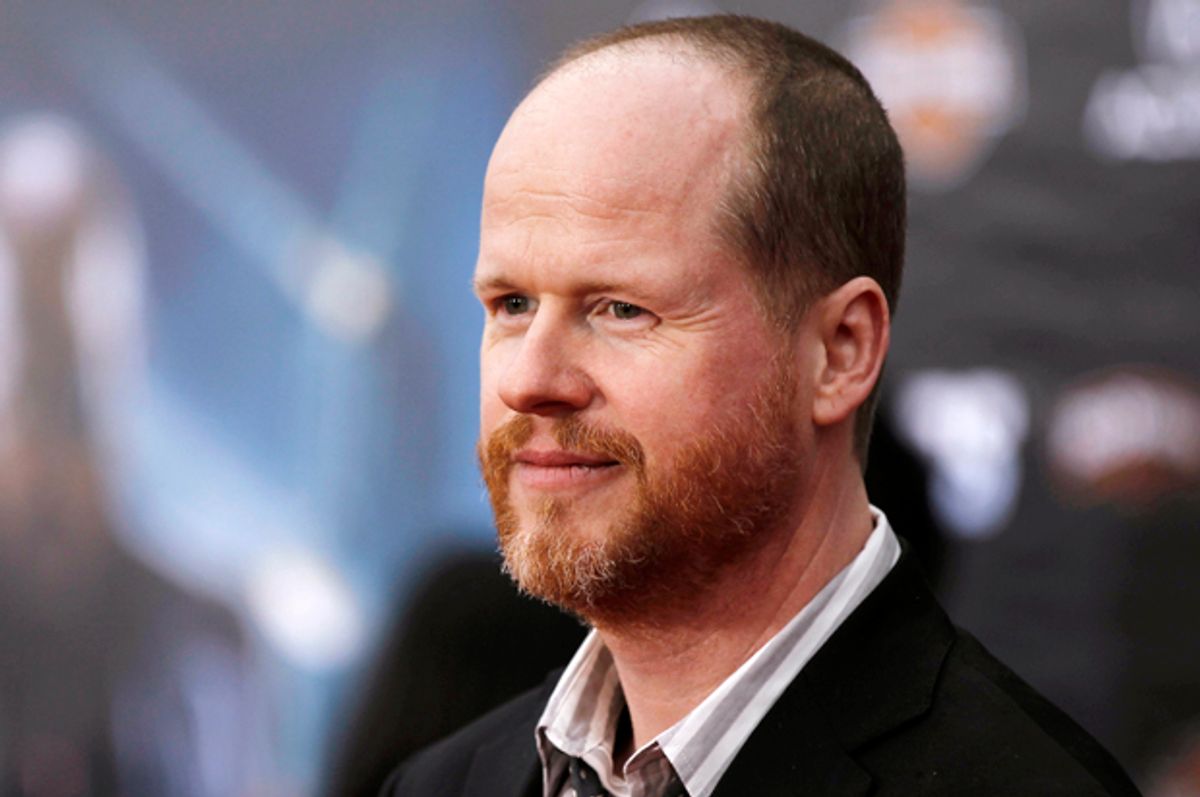 Among all the other great things Joss Whedon has done for me over the years, he did me a great favor this week--he gave me an excuse to walk away from Twitter. Like ironic Buffy Speak or modernized Shakespeare or feminism, it can be yet another thing I do because Joss made it cool.

But anyone who actually reads my Twitter feed can probably sense that Twitter has been souring for me for a while now. Which is strange, because for the past year and a half I’ve tweeted more than pretty much anyone else I know.

Everyone who meets me makes some kind of comment about me and my 24.2K Twitter followers like it’s one of my primary achievements. I’ve had the uncomfortable experience of being singled out by people very consciously trying not to single me out when a local community theater project starts talking “social media engagement”--like being the one millionaire at a charity function, everyone knows it’s your retweets that really count.

A year ago--which, to me, feels like a hundred years ago--someone helpfully laid out for me how the viral nature of social media outrage had a lot more to do with anyone ever having heard of me than any talents or skills I possessed. I basically agreed then and I basically agree now. We all know there’s nothing more entertaining than Internet fights--for third-party spectators, anyway--and Lord knows when I first started seeing that follower count rising it was fun as hell to spar with randos lobbing constant insults at me.

Unlike Joss Whedon, who was working in showbiz before Twitter was a thing--hell, before email was a thing--and who could probably disappear from the face of the Earth for 50 years and still, in 2065, get the futuristic cyborg brain running future Hollywood to take his holo-call on the strength of “I’m the guy who did Buffy!”... I’m not a celebrity, I’m just a “Twitter celebrity.” Walking away from Twitter feels like walking away from my job.

Well, you know what they say. Do anything nearly continuously for over a year and it gets old, especially if that something involves enduring waves of hostility escalating into harassment.

Really, it wasn’t Joss’ take on this that crystallized my feelings about Twitter. It was an article by one of my earliest and highest-”quality” followers, Anil Dash. The kind of annoying person who keeps track of such things would say that one of the most important things about my Twitter account is that it’s followed by Anil Dash, who has 554K followers--more than I’m ever likely to amass--and the possibility that he might retweet or reply to me greatly increases my “global reach.”

But does it? Really? Dash himself writes about his own experience as the guy who actually has the attention of all those half-million followers and it doesn’t seem to do him that much good in the long run. As he points out, the dirty secret of Twitter is “Nobody clicks”; his own typical “engagement rate” on a link he posts is 0.07 percent, and ever since Twitter gave us the button to look at the “analytics” for individual tweets I’ve come to the conclusion that Dash’s engagement rate is actually unusually high--or at least higher than mine.

I’ve in the past tried to explain the innate appeal of Twitter to non-Internet users by comparing it to a cocktail party, though I didn’t do so as colorfully as Michelle Goldberg: “Twitter is like doing cut-rate cocaine at a boring party where a lot of the guests dislike you.”

It doesn’t have to be that way and for many people it isn’t. I’d even venture that for most newer users, entering the social media world is scintillating, fascinating, filled with pleasant surprises at every turn--the way an 18-year-old college freshman gets excited at his first blowout kegger, compared to the 24-year-old college super-senior who sees getting drunk with the bros as a kind of dull chore.

Malcolm Gladwell coined the term “weak ties” to describe the kind of relationships social media creates--but of course social media didn’t create the idea of weak ties. The whole concept of a “cocktail-party atmosphere” is our way of describing weak-tie-generating environments, the ancient social ritual of gathering a bunch of unrelated strangers in a space and letting them bounce witty anecdotes and observations off each other to see what develops.

And cocktail parties are great. If you’re good at that kind of interaction--and I’m not that good at it in person but apparently good enough on Twitter to amass a steadily increasing follower count--those weak ties can convert to strong ones. In the space of a year I’ve made friends on Twitter that I’d count as good friends; I’ve spoken to people who met their spouses on Twitter.

Even when you don’t end up converting weak ties to strong ties, it can be fun. Accepting a random invitation to a Halloween party is how I got to hear a Ph.D. candidate in meteorology hold forth on the Derecho while dressed as a dinosaur. It can be exciting and titillating to hear people trash-talking exes to you because they know you’ll never see them again--just like everyone loves a good subtweeted rant.

And even if there’s no real interaction at all, even an introvert like me likes to be in other people’s company on midnight on New Year’s Eve. The feeling of just not being alone, of being able to see other people reacting to things at the same time you are--that’s the most seductive and most addictive thing about social media.

And that’s the problem. The addictive nature of it. Parties are a great way to network, to make new friends, to have fun. They’re also a great way to throw time down the drain hoping to do all of the above things but failing to do so, because you’ve become addicted to trying to impress rooms full of strangers past the point of diminishing returns--an addiction just as potent as any substances served at the party.

Going out to social events can be a great way to network, or make friends in a new city, or meet the love of your life. But if you’ve already got your dream job, you’ve already got more friends than you can make time to see in real life, and you’re happily married--then what are you really trying to get out of weak-tie socializing?

Joss Whedon points out that it’s the compliments, the retweets, the favs that kept him constantly reloading his Twitter app. For the Twitter-famous--even people in the low five-digit-follower counts like me--the interactions aren’t symmetrical anymore. You become like the attractive person who goes out just to get validation that you are in fact attractive. Or, worse--and more literally--like the middlingly famous local actor who shows up at birthday parties hoping someone will say, “You’re the guy from the Shakespeare festival!” or “You were on Jeopardy!”

It’s not a good look. It’s guaranteed to lead to bad decisions down the line. It’s not like we don’t have plenty of non-digital cautionary tales of celebrities who went to parties too much, chased validation too much and got burned.

And then there’s the elephant in the room. Yes, Joss got harassment on Twitter. No, it wasn’t the “feminists” or any other specific group of people who “drove” him off of Twitter--for my part, I saw as much backlash for clearly non-feminist reasons like angry Hawkeye/Black Widow shippers or people mad that Quicksilver died as for feminist ones--but yes, the constant static of haters probably played a role.

No, Twitter celebs don’t have to worry about the same security concerns that real celebs do when going to real parties. (Although I have had to deal with angry trolls crossing over to abusive phone calls, attempts to hack my accounts, being doxed, etc.)

But you do have to deal with a relentless steady stream of people deliberately trying to fuck with you and ruin your day--and even after you get high-profile enough that it stops being worth your time to engage, the constant low-level irritation of hitting Twitter’s notoriously unreliable “Block” button gets to you.

Like a giant cocktail party with open doors advertised to the public, Twitter is a great place for a stalker or harasser to get close to you if they want to--and if there’s someone who’s recently become Public Enemy Number One it’s a great place for an angry mob to form around them. If you’re a woman, you have to fend off waves of the digital version of the same boundary-crossing sexual advances that dog women at real parties.

Everyone knows the biggest mistake you can make when doing an invite list is inadvertently inviting two people--or worse, two groups of people--who have a reason to resent each other. Multiply that a thousandfold and you end up with a platform optimized for bullying and abuse.

Is all discourse dominated by trolls on Twitter? No, of course not. Is it possible, with an uncompromising hand on the Block button and the use of third-party tools, to tune most of it out? Sure.

But the possibility of a wave of mob harassment is always lurking behind the scenes, waiting to explode for the dumbest possible reason or sometimes no reason at all. I’ve said that despite the illusion of notoriety my high follower count gives me, very little seems to come out of my tweets--the exception is when the mob is riled up, at which point I can expect every tweet I’ve ever made to get dogpiled and dissected, like finding out that your cocktail party conversations have been taped by an enemy to use against you in a court of law.

Who wants to go out partying when you’re a “controversial” figure, and when total strangers feel okay coming right up to your face and telling you, booze on their breath, just why they hate you so much? This is an unpleasant but uncommon scene at your typical frat party--it’s a daily, hourly or sometimes constant experience on Twitter, depending on how hated you are at the moment.

And when you find yourself trying to explain to yourself that you’re still having fun partying every night when most of your parties end up in bitter shouting matches and angry brawls, you might have a problem. The danger stage of addiction is when the receding highs get harder and harder to find as the nasty side effects get worse and worse.

My colleague Noah Berlatsky expresses hope that Twitter might get better if, like a bar that gets a more selective guest list and pours the booze with a lighter touch, it tweaks the tech to optimize for a different social result.

I concur, while at the same time that the basic problem is the same as the one Joss Whedon expressed--too much easy stimulation, too much rapid-fire shallow interaction, too much noise. The antidote to the stress of partying too much isn’t better parties, it’s taking a break and spending time by yourself, or with the close friends with whom you have strong ties.

I wouldn’t be surprised if Whedon reactivates his Twitter once things have calmed down for him, or once he’s got something new to promote. I haven’t even deactivated my account and probably will still pop my head in once in a while to chat with the people I know, and, indeed, like anyone publicly announcing their desire to change a habit I may fall off the wagon entirely in a week.

But for now the app is gone from my phone. And I’m loving the peace and quiet.