What "Avengers" got right about Black Widow: Infertility is devastating — even for superheroes 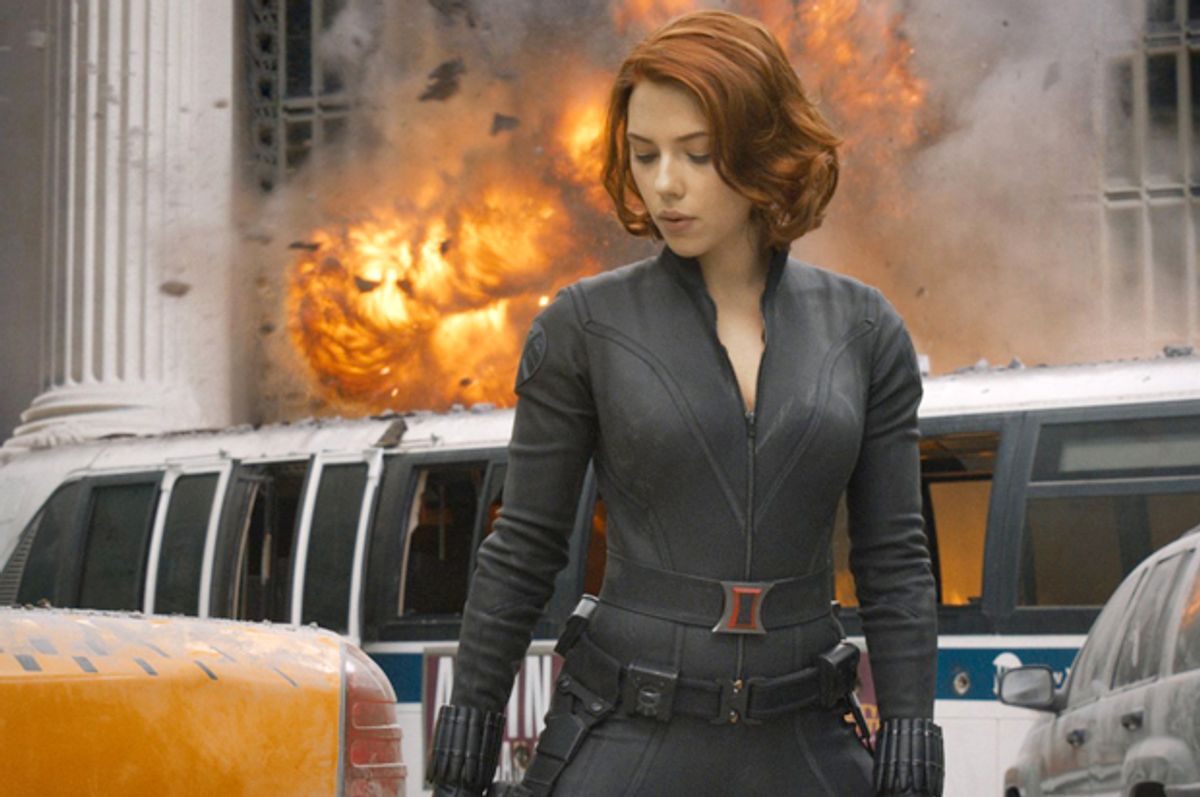 Scarlett Johansson as Black Widow in "The Avengers" (Marvel)
--

I spent my flight into Salt Lake City staring out the window at the desert instead of writing this piece. It was stark and, thanks to the drought, increasingly difficult to tell where the California countryside ended and where the desert proper began.

I haven’t gotten enough sleep this month and the multitude of doctor’s appointments haven’t helped. I’ve had three ultrasounds and a blood test in the last three weeks, and so far, what I’ve learned is that my left ovary is useless and my eggs only marginally better. The view isn’t pretty, but I have little alternative because there’s a friendly 6-month-old across the aisle trying to make eyes at me. I look at the barren hellscape outside my window and it feels like looking in the mirror. I am empty. I have failed. And I am a monster.

I’m not actually a monster, but it sure feels that way sometimes. Fertility is a funny thing. It’s not generally a topic of polite conversation because it makes people uncomfortable. But sterility has been a topic of wide conversation lately thanks to the latest Marvel mass installation, "Avengers: Age of Ultron." In the film, Natasha Romanoff, better known as Black Widow, the trained assassin played by Scarlett Johansson, gets both a new love interest in Mark Ruffalo’s Bruce Banner (aka the Hulk) and an expanded back story that delves into how, at a young age, Natasha was broken down and trained to be a killing machine. The process culminated in forced sterilization, an occurrence she still mourns.

There’s been much outcry on the Internet about this story turn. The backlash grew so ferocious that it inundated "Ultron" screenwriter and director Joss Whedon’s Twitter feed, preceding a long Twitter break that just so happened to coincide with him wanting to take a long break from the Internet. (Amusingly, his new film’s supervillain decides to destroy humanity after getting one look at the Internet.)

The best review decrying the story line is Meredith Woerner and Katharine Trendacosta’s io9 article that dismisses Romanoff’s back story as little more than a woman who feels incomplete because she can’t have babies. It blows, the piece argues, that instead of getting the strong character the authors expected to see, they’re getting a dumb ol’ lady who’s sad about being barren.

I get it. I wrote a piece in the wake of a 2014 "Parks and Recreation" episode that revealed Leslie Knope was pregnant with triplets decrying the need for every sitcom woman to pop out a couple of kids late in a show’s run, for lack of anything better to do. I was upset that there weren’t more options out there for women who just weren’t interested in procreating. In it, I also mentioned a parallel issue that cropped up on "How I Met Your Mother" where Robin (coincidentally played by the Marvel Universe’s own Cobie Smulders), long established as never wanting children, found out she was barren, a twist that read in the moment as a ham-fisted attempt to ensure the character could never renege on her instincts.

But what I didn’t get into was what the Robin arc got right, which is how devastated Robin was at learning about her sterility, despite being confident that having children was never a choice she was going to make.

That’s a huge part of what’s being overlooked in the outcry against Black Widow’s story. As much as it may look on the surface like Natasha is mourning motherhood, what she’s actually mourning is her ability to choose. It’s not about children; it’s about choice. What she has lost isn’t even so much her ability to have a family (as mind-bogglingly brilliant as she is, she, of all people, could find a way to procure a baby). No, what she mourns is her ability to fantasize about that “normal” life, the world opposite the one she currently lives in. Why begrudge her the fantasy of the nebulous other, of picking up and beginning a life that’s the polar opposite of the one she’s currently leading in every way? Natasha is bereft, grieving Plath’s fig tree, but it wasn’t indecision that cost her fruit; it was the cruelty of others that lay waste to her tree.

Moreover, let’s say that Natasha was explicitly adrift at the thought of never having the opportunity to carry a child. Is that so unthinkable? This is a woman who has ultimate control of every aspect of her body and mind. She has been trained within an inch of her life to kill and manipulate and destroy. She has no superpowers, yet often comes through to save the lives of her extraordinary peers. She has agency over every square inch of her body, save one.

Me, I was used to my body failing me. Dysthymic since birth, it’s only in recent years that I’ve come to terms with being on medication for the rest of my life. I’ve been dealing with the fundamental disconnect that comes when your body will not do what you want it to do for years, yet the depth of betrayal that I still feel about it devastates me. We assume that bodies are standard issue, that they’ll do whatever we ask of them, whenever we ask it. With any complication or miscommunication between what we want and what we get, there is a profound sense of sabotage, as though you’ve managed somehow to stab yourself in the back. It leads to a deep sense of depersonalization in even the most broken and doubting of us and I can only imagine how difficult it must be for someone as exceedingly precise as Natasha must be. In her own mind, though confident in her ability to control every situation, how unthinkable must it be to not control this aspect of her body?

Let’s face it. We’re not talking about doing something extraordinary or unreasonable. We’re talking about a body doing something it was made to do, its very biological imperative. Natasha feels like something has been taken from her — a) because something has, and b) because her brain is goddamn hard-wired to feel that way. Natasha didn’t choose her sterility any more than most women who are struck with it, and it likely leaves her feeling many of the same things, “Why can’t I do this? What is wrong with me? What am I if I can’t do this? Am I even a woman? If I’m not a woman, what am I?” These thoughts may seem outlandish. They may make no sense. But they persist, no matter how logically you may approach them.

Black Widow’s story as laid out in "Ultron" may not be compelling to the audience as a whole, but it’s dismissive to try to reduce it to being just about baby lust. No, this is about something deeper and more troubling by far. It’s about being stripped of things before you even have a chance to decide whether you want them. It’s not so far removed from the essential fight for reproductive rights. Every woman should have the right to choose whether or not she wants to get pregnant, and that means, explicitly, having the right to have a pregnancy just as much as it means having the right to end one.

Film critic Willow Maclay further illustrated the importance of sterility in pop culture on Twitter, pointing out that Black Widow’s plight likely speaks to many trans women who will never know the experience of giving birth and the alienation that comes from being denied even the option.

Maclay also goes on to point out the relatively obvious point that, when calling herself a monster, Romanoff was almost certainly speaking about her lifetime spent as an assassin, not her inability to conceive. Even if the latter were true, it’s a metaphor; comparison for illustration is literally its function.

The ability to conceive, the ability to choose to conceive, these are not options guaranteed to all of us. Not every person can do what so many others take for granted. For those of us locked in situations where being pro-choice means wishing we had any choice at all, let us mourn what we have lost or what we have never had, and let us do so with the benefit of seeing ourselves reflected in a woman who may stumble under the weight of grief, but still finds a way to fight back.