America is about to make a horrible mistake all over again

In the '90s, NAFTA was full of grand promises that never came true. Now we're hearing those same promises again 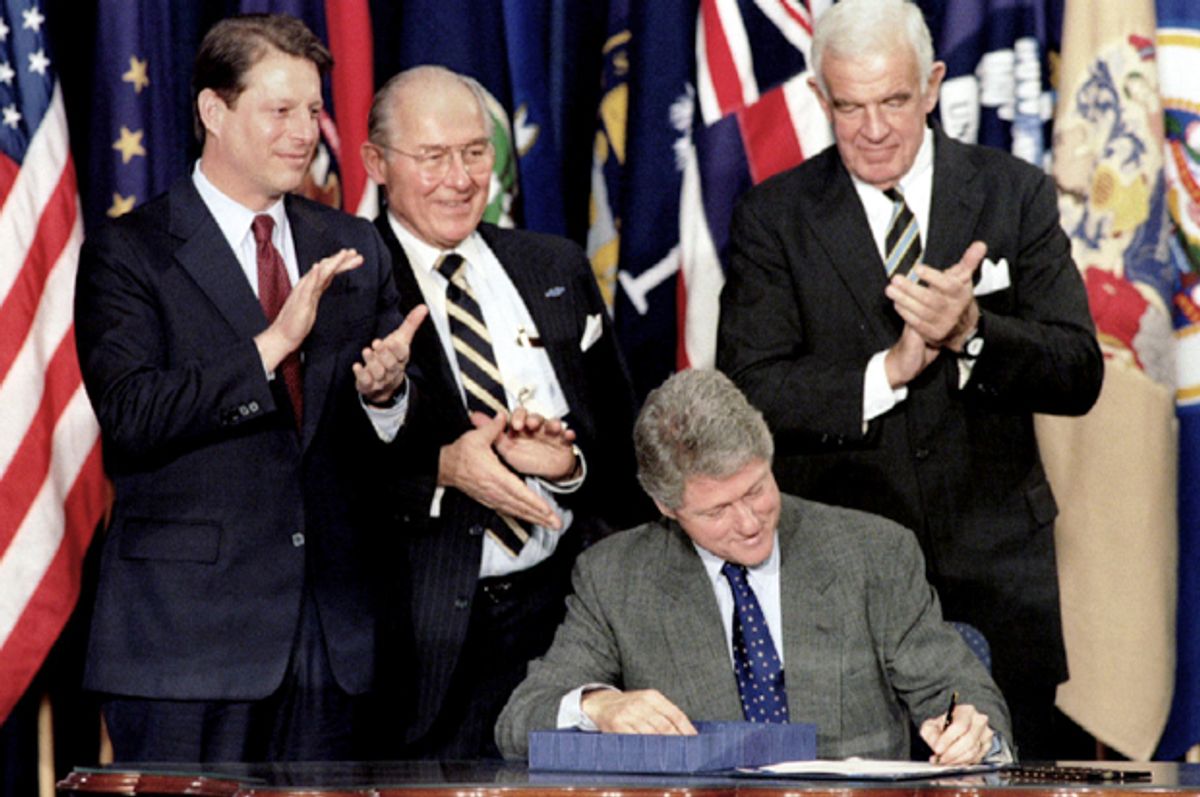 Back in the early '90s, a debate was raging over whether to pass the enormous North Atlantic Free Trade Agreement. Al Gore debated Ross Perot on "Larry King Live," while President Clinton had former Presidents George H.W. Bush, Jimmy Carter and Gerald Ford all join together to praise the deal and earn the public's trust. Throughout all of the media escapades, a lot of promises were made. On the signing of NAFTA, President Clinton said that the deal would create an economic order in the world that would “promote more growth, more equality, better preservation of the environment and a greater possibility of world peace.” Specific promises were also made -- Clinton said that the deal would “create 200,000 jobs [in the U.S.] by 1995,” specifically “by fostering an export boom to Mexico.”

NAFTA was not a typical trade deal. There was much more to it than just cutting tariffs and quotas. This deal was more about expanding corporate privileges and safeguarding foreign investments, which in a sense makes it less about free trade, and more about hooking up big business with the ultimate corporate welfare package. NAFTA included the infamous Investor-State Dispute Settlement (ISDS) provision, extended patent rights for medicine, and limited regulation for certain industries.

The promises were great, but like so many political promises, they were just plain wrong. While an export boom to Mexico was predicted, the opposite happened. In 1993, one year before NAFTA was implemented, the United States had a trade surplus with Mexico of $2.5 billion (inflation-adjusted) and a $29.1 billion deficit with Canada. In 2012, after more than a decade and a half, the combined U.S. deficit had grown to $181 billion. Indeed, NAFTA ended up creating an import boom from Mexico, rather than an export boom to it.

Of course, with a trade deficit came the loss of American jobs. It is estimated that NAFTA resulted in a net loss of more than 1 million U.S. jobs, while more than 5 million manufacturing jobs have been lost since its signing. Certain corporations, which had lobbied for NAFTA, also made promises that it would help them create new domestic jobs, but ended up outsourcing jobs. Johnson & Johnson, for example, promised that it would hire hundreds of U.S. workers, but instead moved jobs offshore to Mexico. Three years after NAFTA went into effect, 60 out of 67 companies that had made these sort of promises had not fulfilled them. It has also been shown that NAFTA has contributed to our growing inequality, which is unsurprising, with all of the cheap labor offshoring brought to corporations.

So, promises of job growth and equality were completely false. But what about President Clinton’s promise of “better preservation of the environment”? Well, a look at use of the Investor-State Dispute Settlement provision, which is set to be included in the Trans-Pacific Partnership, does not give one much hope. The ISDS is an instrument that allows foreign investors to sue a country's government if it hurts the company's investment through direct (nationalization) or indirect (regulation, moratorium) expropriation. One recent case reveals the danger of this mechanism: The oil and gas company Lone Pine has used the ISDS to sue the Canadian government after it filed a moratorium on hydraulic fracturing because of the environmental dangers. Because the ISDS can be used for “indirect expropriation,” Lone Pine is suing for $250 million.

Now, one would expect all of these realities to make political figures think twice about making trade deal promises, but of course they have not. “When it comes to the benefits of trade, American workers are among the biggest winners. Commerce with our trade agreement partners supports more than 17 million American jobs,” said U.S. Chamber of Commerce CEO Thomas Donohue, clearly unaware of how much damage  the free trade movement has done to America’s shrinking middle class.

And, of course, President Obama’s unflinching support of the Trans-Pacific Partnership has been one of the most depressing aspects of his administration. The Obama administration has said that the TPP would provide 650,000 new jobs to the United States, which the Washington Post revealed as completely misleading, while a report by the Center for Economic and Policy Research stated that:

“Most workers are likely to lose (from the TPP agreement)—the exceptions being some of the bottom quarter or so whose earnings are determined by the minimum wage; and those with the highest wages who are more protected from international competition. Rather, many top incomes will rise as a result of TPP expansion of the terms and enforcement of copyrights and patents...There are winners and losers from trade, and research has shown that trade contributes to inequality.”

Like NAFTA, the TPP is not simply about lowering tariffs, but about extending the protections and powers of corporations. One example of this comes with the patent extensions that will be granted to the pharmaceutical industry. Provisions in the TPP will allow drug companies to extend their 20-year patents by coming up with new uses or slightly altering the chemical, also known as “evergreening.” This will prevent generic drugs from entering the market, which will make crucial and sometimes lifesaving medicines unaffordable in many countries, particularly in Asia.

Probably the most notorious provision to be included in the TPP will be the Investor-State Dispute Settlement, which was used in the Lone Pine/Canada suit. Elizabeth Warren has attacked this provision as a corporate handout that would “allow foreign companies to challenge U.S. laws — and potentially to pick up huge payouts from taxpayers — without ever stepping foot in a U.S. court.” As the Lone Pine case stated earlier shows, she is entirely correct.

Of course, the Obama administration responded to Warren with a misleading post defending the ISDS, but even the libertarian Cato Institute came to her defense. A major talking point for TPP advocates was that the ISDS provision in the TPP will be different from the NAFTA version, and up until last month there was no way to verify this, given the TPP’s confidential nature. Luckily, WikiLeaks changed that by posting the ISDS chapter, dated Jan. 20, 2015, and it turns out it isn’t all that different. Lise Johnson, from Columbia University, told Vox:

“As compared to US and Canadian practice over roughly the past 10 years, there really isn't too much that is radically new...There are some tweaks here and there, but the basic model of investor-state dispute settlement those countries have been pursuing is still reflected here.”

Overall, TPP advocates seem to be taking up the same exact talking points and promises that were used two decades earlier, as if this time things will be different. But there is little reason to believe that things will be different. The Obama administration has unfortunately been hoodwinked by corporate America, and out of his 28 trade advisory committees, 85 percent of the members come from private industry and trade associations, leaving the remaining 15 percent for representatives from labor organizations, academia, NGOs and the government. There is a vicious fight coming, and if the TPP passes, we can expect American and global inequality to only grow. In 1993, after much debate, NAFTA was passed by both the House and Senate, and signed by President Clinton. One can only hope that this time things will be different.