Being an angry white dude is an identity, too: How dog whistles & identity politics define the GOP 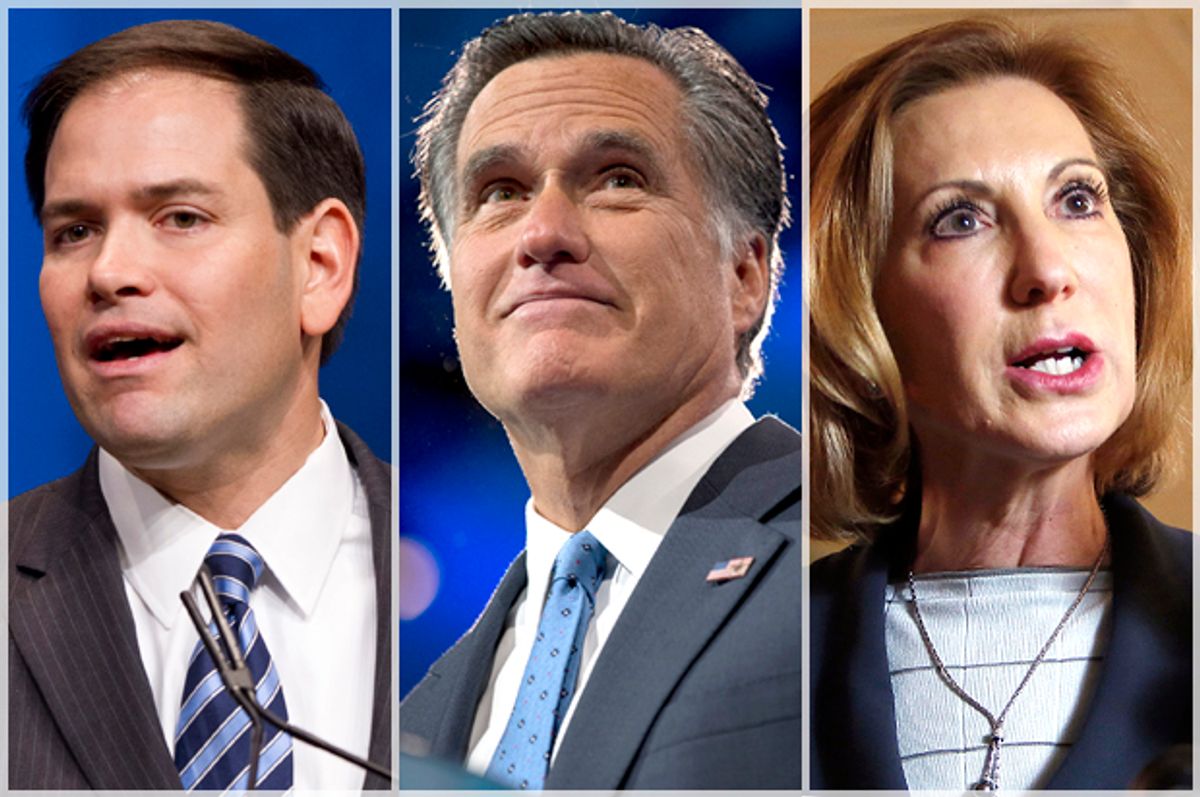 We still have more than a year to go before the 2016 presidential election, so may the Drowned God/slender man help you if you’re already exhausted by pieces pondering whether or not Republicans will “embrace” identity politics this time around. Life is unfair that way. All we can do is endure.

The New York Times has a piece today looking at Marco Rubio as a potential “spark” in a Republican party struggling to find itself this cycle. He is also, some conservatives seem to think, a gateway drug to these aforementioned identity politics.

“The identity politics people in the party want a champion who looks like him to mitigate accusations of racism,” Ben Domenech, a conservative writer, told the Times. “And the classical conservatives look at him and say, ‘This is somebody who can sell our ideas to the public.’”

This is the second crudest rendering of identity politics I’ve seen this week. First prize goes to former Hewlett-Packer CEO Carly Fiorina, who declared her presidential candidacy with a video vowing to “put an end to identity politics” once and for all, as she clicked off a television playing Hillary Clinton’s own campaign ad. It was, uh, not subtle. (But neither is a single thing Fiorina has said about gender and politics.)

But in both renderings, being anything other than a white guy in the Republican party functions as some kind of trick. Either it’s a shield to use against voters who think the GOP is racist, or, in Fiorina’s own assessment of what being a woman could mean for her in the 2016 race, a neutralizer that will keep anyone from talking about gender in the first place.

Fiorina’s double talk about identity politics being bad while making gender a BFD in her campaign is bizarre, of course, but it’s only part of what’s so off about the party’s relationship to the idea. The GOP is way, way, way into identity politics, so it would be great if we could declare a moratorium on pretending otherwise.

Here’s an example of what I mean, from the Times piece on Rubio:

Conservatives have long had a philosophical contempt for politics driven by gender, racial or class designations. But those sentiments are giving way as the party tries to compete with Democrats, who galvanized support among targeted demographics to decisively win consecutive presidential elections.

Republican voters are overwhelmingly white: The composition of the electorate in almost every contested state during the 2012 party primary was about 90 percent or more non-Hispanic white, according to exit polls.

A lot to process here, guys.

“Conservatives have long had a philosophical contempt for politics driven by gender, racial or class designations” is a true statement if you believe that “male” is not a gender, “white” is not a race and “rich” is not a class. More than just philosophical contempt, the GOP has staked out a position that to talk about policies from the standpoint of how they impact the lives of women, people of color or LGBTQ people is cynical pandering rather than an essential way to understand the impact of policies that matter to real people's lives.

Huckabee’s recent exchange with Jon Stewart while promoting his book “God, Guns, Grits and Gravy” is a revealing look at the kind of signaling involved in the white-centered, resentment-driven identity politics that the GOP trades in but is rarely called out in such direct terms (transcript from the Prospect):

Stewart: It sounds like there's an idea that the people who live on the coasts are not real, that you're talking about -- the Bubbas are real, and we're not.

Stewart: But you believe that the Bubbas are better than the Bubbles.

Stewart: No, you don't get it.

Huckabee: Six and a half years, I've come to New York, and I've seen the difference in the attitudes and lifestyles and culture. It's not that one is better.

Stewart: Yes it is. You believe one is better.

Huckabee: Well if it is, it would be Bubbaville.

The examples of how conservatives appeal to white voters -- both in terms of their interests and their resentments -- is endless. The Times piece also quotes NRA head Wayne LaPierre telling an audience that “eight years of one demographically symbolic president is enough." What does that mean other than we are ready to get back to a white guy in the White House?

But sure, the GOP doesn't "do" identity politics.