Boy Scouts can't have it both ways: Stop kicking out gay leaders

Supporters are rallying around Eagle Scout Brian Peffly, who says he was fired for his sexual orientation 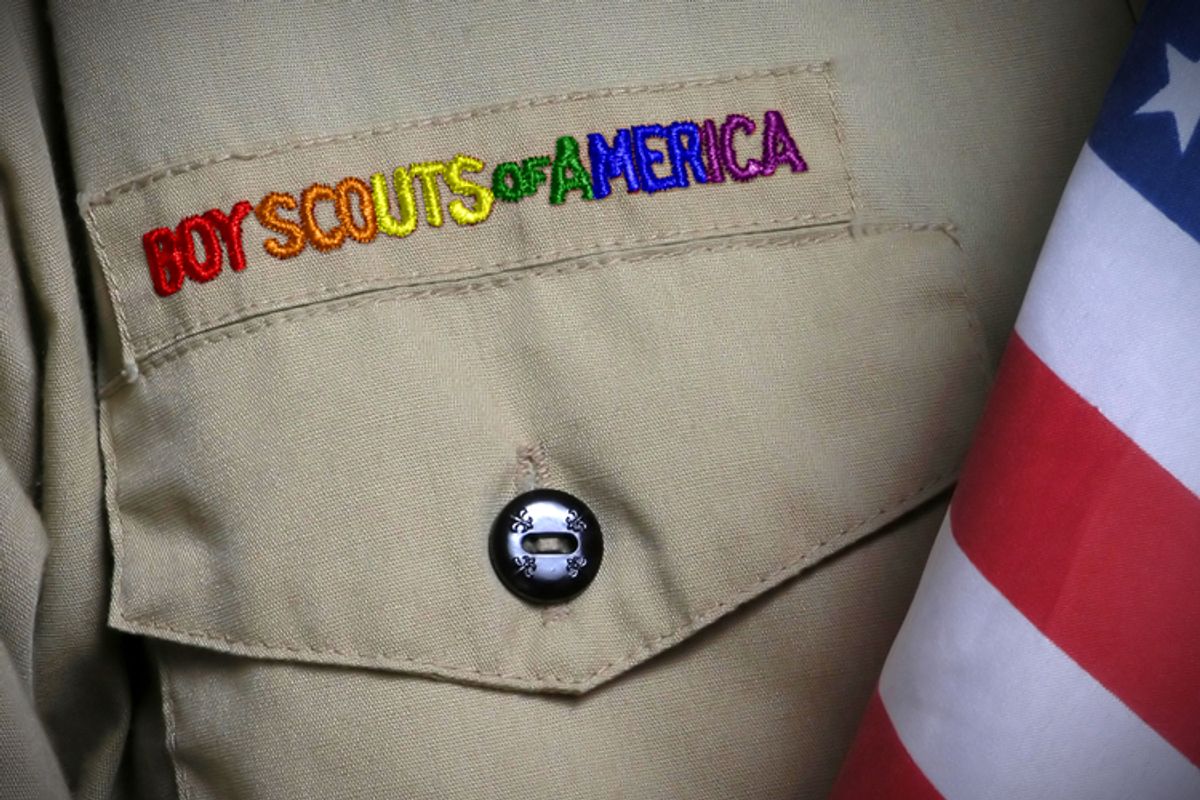 An openly gay Ohio Eagle Scout who volunteered as an assistant scoutmaster has been rejected from the Boy Scouts of America with no substantive explanation. The reason, however, is quite clear. See the phrase "openly gay."

Brian Peffly, an intensive care nurse and a member of the LGBT rights advocacy group Scouts for Equality, claims he was prohibited from working as a troop leader after he publicly identified himself as gay, violating what is effectively a "don't ask, don't tell" policy in BSA. The organization has denied membership and leadership positions to openly gay individuals for years, a policy that was upheld by the Supreme Court in 2000; just last year, BSA updated its policy to allow gay scouts to join, but the national organization maintains a ban on openly gay scout leaders.

According to Peffly, the organization revoked his membership after he appeared in a local media interview and discussed his sexual orientation. He told the Cleveland Plain Dealer he later received a voicemail from a BSA representative telling him he had been released because of "issues with [his] ability to comply with some of our rules and regulations."

"I had the option to lie about it," Peffly told the Columbus Dispatch. "The first part of Scout law is that a Scout is trustworthy. I went with Scout law."

The former scout's local scouting chapter, the Simon Kenton Council, issued a statement in September stating it "does not believe in denying membership in our program to a youth or adult leader on the basis of sexual orientation, race, ethnicity, religion, disability or economic status." But it isn't making good on that promise. The Dispatch reports that it was the council that reported Peffly to BSA, though the national organization didn't take action against the assistant scoutmaster for several months. He says he received his official leadership card in the mail just a few months after disclosing his sexuality.

"I knew that I was accepted; they didn’t care about my orientation," Peffly said. "Why does that need to come up if you’re teaching fire-building or first aid or whatever?"

Now that Peffly has been kicked out of the organization, his local council isn't standing behind him. Jeff Moe, the Simon Kenton scout leader, told the Plain Dealer that he and the troop don't plan to fight BSA's decision, despite their opposition to LGBT discrimination.

"We recognize that the actions of the National Council do not reflect our recently adopted Statement of Diversity, but as members of our national organization, we are bound by its policies," Moe said.

Plenty of supporters are, however, rallying around Peffly, and have started a #StandWithBrian social media campaign as well as a website. But other scouts from different parts of the country who have experienced similar discrimination from BSA have been able to count on more from their troops: last year, a Seattle troop allowed itself to be disbanded rather than fire a gay scout leader, while last month, the New York chapter hired an openly gay Eagle Scout as a summer camp leader.

In New York, had the organization declined to hire the scout on the basis of his sexuality, it might have been in violation of a state law protecting gays and lesbians from employment discrimination -- but that's not the case in Ohio, as the Plain Dealer points out. The state has no law prohibiting employers from refusing to hire a person for his or her sexual orientation or from participating in discriminatory practices on the job.

That means Peffly is at the mercy of a national organization that has fought long and hard for its continued right to discriminate against gay members, mostly because of where he lives. And in that respect, his rejection from the Boy Scouts is a microcosm of patchwork LGBT civil rights across the country.

In states that prohibit discriminatory hiring and employment practices, openly gay individuals have the legal standing to challenge prejudice as organization-wide policy. The same goes for housing discrimination, which has been widely documented by the Department of Housing and Urban Development -- and which is conspicuously not banned by the Federal Fair Housing Act. And then, of course, there's the issue of same-sex marriage, which -- though likely to be legal throughout the U.S. as early as this summer -- is only one of the many rights denied LGBT people depending on their zip codes.

The problem isn't just the Boy Scouts, though the organization's insistence on discrimination is a problem. Under its current policy, the organization is effectively condoning the membership of openly gay 17-year-old scouts and then condemning them as the clock strikes midnight on their 18th birthdays -- all for the sake of being anti-gay, some way, somehow. As opposed to its counterpart Girl Scouts of the USA -- which maintains exceptionally inclusive and LGBT-friendly policies to the ire of right-wing activists -- BSA is trying to have it both ways. And it's often doing so without the support of the local troops it manages.

But, again, that's only one part of the problem; the rest is a failure of state and federal policy. It's the lack of a practical guarantee of full civil rights for LGBT people throughout the U.S., and it's starting to look more and more unreasonable.