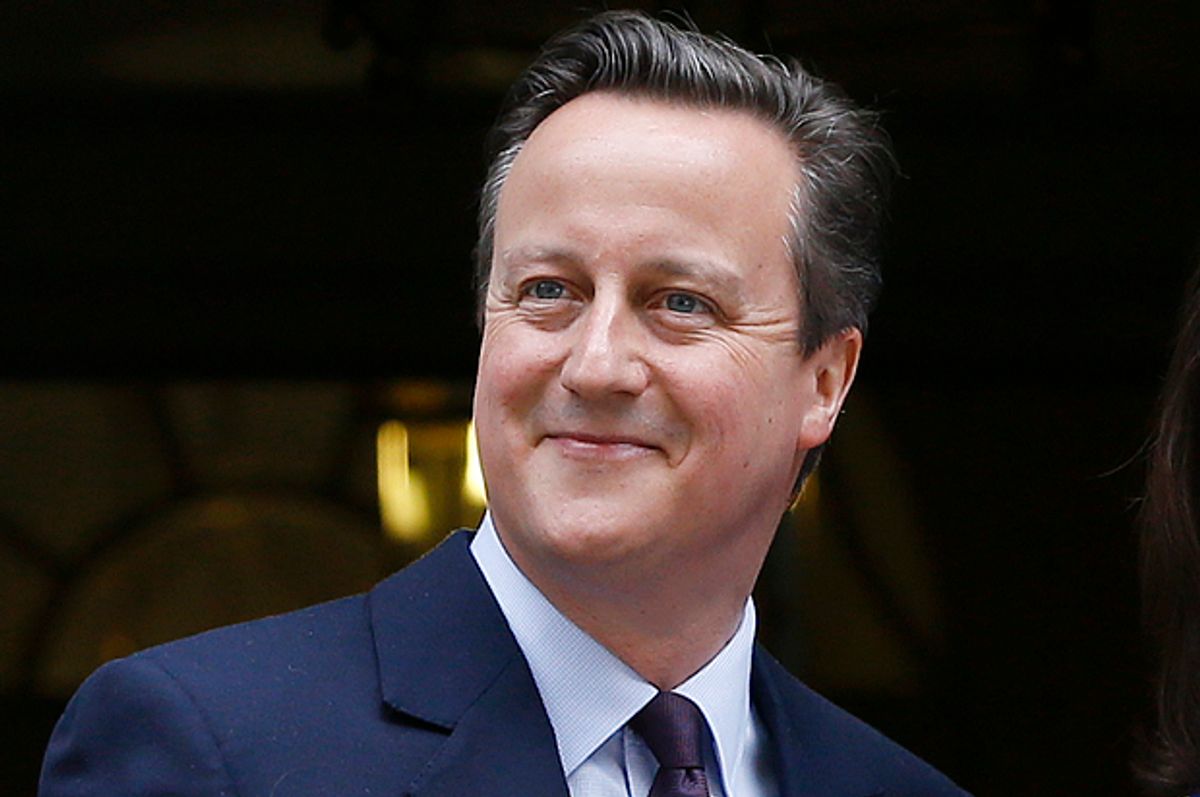 The darkest of days is upon us. In a world with Radical Islamic Jihad-Type Things on the march against decency everywhere, the United Kingdom has just reelected as its prime minister a theocrat-mollycoddling, spineless appeaser intent on capitulation to the Shia Caliphate and the nuclear obliteration of Israel.

We speak of David Cameron, the posh ninny whose Conservative Party made a mockery of pre-election polls by racing to an outright majority in the House of Commons. Conservatives back here in the United States are thrilled to see their brethren abroad make mincemeat of Labour and the dreaded Scottish nationalists. They have many reasons to. The international project of kicking poor people as one might a foot-ball on the fields of Eton will continue, and now unabated by the need to make pretend-concessions to coalition partners.

There is no good news for lefties in England today. But it's not such a bad deal for lefties in the United States! President Obama gets along well with David Cameron. And Cameron, crucially, has been a partner in the so-called greatest act of appeasement in history: the one in which the Western powers, plus Russia and China, are trying to talk to Iran about its nuclear program instead of just skipping straight to the bombing part. Hawks like to talk about how President Obama is Neville Chamberlain, appeasing the Hitlers of Iran. But David Cameron is right there with him -- and Cameron even has the same gig that Chamberlain had!

When Cameron visited the White House in January, he backed up Obama in a joint press conference, urging members of Congress not to pass a new round of sanctions. It went beyond that: he phoned senators personally to lobby them.

"I have contacted a couple of senators this morning, and I may speak to one or two more this afternoon," Cameron said during a joint press conference with President Obama at the White House Friday. The prime minister arrived in Washington Thursday to meet with the president and his administration to discuss a range of issues.

Cameron said his calls were "not in any way... to tell the American Senate what it should or should not do." Instead, he wanted to tell the U.S. Senate that "it's the opinion of the United Kingdom that further sanctions, or further threat of sanctions, at this point won't actually help." The legislation, he said, "could actually fracture" the international coalition negotiating with Iran over its nuclear ambitions.

Cameron's public overtures to the mullahs get even worse: He actually met with Iranian president Hassan Rouhani last fall in New York. Did he hand Rouhani any nukes at that very meeting? There is no way to be sure that he did not.

Cameron has celebrated the framework agreement reached with Iran last month. He referred to the preliminary agreement as a "strong" one. His defense minister -- or "defence," as the silly people spell it -- fleshed out the Cameron government's thinking with yet more Chamberlainy commentary:

"This is a welcome agreement. It is clearly better than having no deal at all," he told BBC Radio 4's The World At One.

"There will now be limits to the enrichment capacity of Iran, their research and development will be controlled, and they will now allow greater oversight over their civil nuclear programme.

"Of course, it is all subject to verification - the sanctions will not be lifted until the progress that has been agreed by Iran is actually being made on the ground.

"A deal like this does help to improve confidence and trust on all sides and avoids the kind of nuclear arms race that might take place if there wasn't a deal."

That sounds to us like dangerously wishy-washy moral relativism of the sort that leftists might employ. There is only good and evil, and these things are objective. There is Churchill and there is Hitler. You either want to bomb Iran immediately or you want to see Israel get nuked. David Cameron is seeking a diplomatic resolution with Iran, and he is therefore complicit in Evil. It is a tragic day for Good.