We still don't know what happened to two top researchers, but their disappearance raises disturbing questions 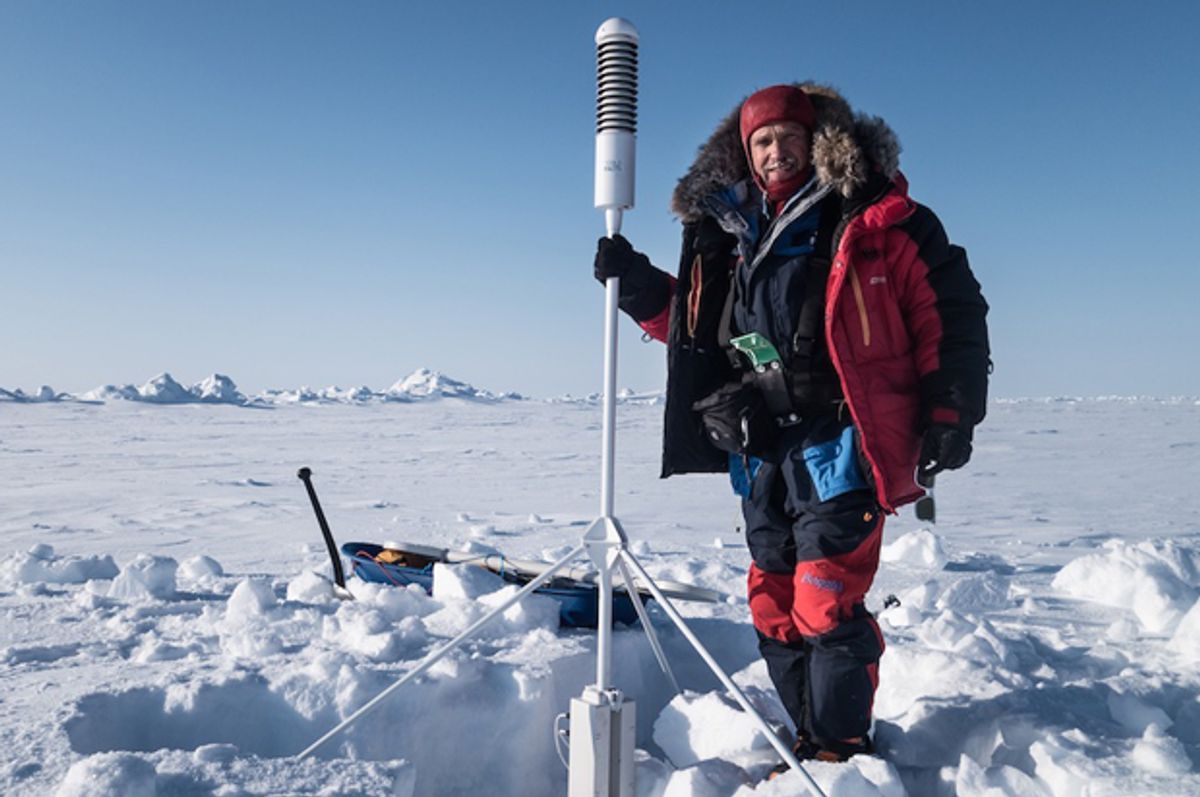 Early in the morning of April 29, the Royal Canadian Mounted Police in Resolute Bay, a small Inuit community in the far northern reaches of Canada, received a distress call from Marc Cornelissen and Philip de Roo, a two-person team collecting data in the Arctic.

It was the 23rd day of their expedition, organized through Cornelissen's Holland-based scientific research organization, Cold Facts. The time was easy to measure, de Roo had joked several days earlier in a voice recording, based on smell alone -- neither had washed in as many days. They were only a few days away from their scheduled pickup, on May 4.

Search and rescue planes were deployed to scour the area where the researchers were last believed to be located. They spotted, and managed to rescue, the team's dog, but found no sign of anyone else. After just two days in the harsh Arctic conditions, they had no choice but to assume that both men were gone. The search and rescue became a recovery mission, with the goal of bringing home the men's bodies and equipment.

The disappearance did not receive an enormous amount of mainstream news coverage, but as word of the tragedy spread, blog posts began to appear from people who had traveled with one or both men in the Arctic, memorializing the lost researchers and, in nearly all cases, commenting on the biting irony of the circumstances in which they were presumed to have died: having fallen through the ice.

It was Cara Augustenborg, who in 2008 was selected as a climate ambassador on a expedition sponsored by Ben & Jerry's and led by Cornelissen, who voiced the question point-blank, asking, "Did climate change steal my friend?"

“I’m a scientist, so I really hesitate to say any one thing is related to climate change," Augustenborg, who is currently the climate change spokesperson for Ireland's Green Party, told Salon. "But it is just too coincidental to not just come out and say it ... to say that at least people are saying this.”

In voice recordings made over the course of their expedition,  Cornelissen and de Roo made reference to the unseasonably warm weather -- “too warm, actually," Cornelissen confessed in a final recording, posted online just one day before he vanished. He was nonetheless in his typical good spirits. "In the end, it was me skiing in my underwear only -- and my boots, of course," he said. "It's very good that you guys don't have a picture of me from the ice."

"We think we see thin ice in front of us, which is quite interesting," he said. "We're gonna research some more of that -- if we can."

Thin sea ice is far from an unusual sight in the Arctic, which is warming at nearly twice the rate of the rest of the planet. The region is losing about 11 percent of its sea ice per decade, a decline, as Margaret Williams, the managing director of the WWF’s Arctic program, previously told Salon, that is “one of the most visible impacts we see as a result of climate change." Even more significant has been the loss of older, thicker and thus more resilient ice, which in recent winters has become, according to the National Oceanic and Atmospheric Administration, "extremely rare."

It was a message that Cornelissen, who was dedicated to climate outreach, was particularly eager to share. “He wanted people to just know how fast the Arctic is changing," Augusternborg recalled. "I still talk a lot about the expedition in public, and I always use one of the things he said: The reason we’re seeing changes in the Arctic so quickly is because when you change the temperature of a frozen environment just one or two degrees, it all melts and transforms into a completely different ecosystem.”

But what struck many, upon hearing the news, was that Cornelissen and de Roo weren't just traveling anywhere. Their expedition had taken them to what's known as the Last Ice Area. The WWF identified the area several years back as part of its efforts to protect the Arctic polar bears, explained Clive Tesar, the head of communications and external relations for the WWF's Global Arctic Programme. Recognizing that any hopes of mitigating climate change would come too late to save the rapidly disappearing summer sea ice, they decided that a parallel goal to reducing greenhouse gas emissions would have to be focusing conservation efforts on the habitat that might hold out the longest, thus buying the species a few extra decades: The purpose of Cornelissen and de Roo's expedition was to measure the quality and thickness of the sea ice across 400 kilometers of this area, in order to help the WWF with its work. Much of the data they collected has yet to be recovered for analysis, said Marielle Feenstra, a spokesperson for ColdFacts. But their deaths seem to suggest that even this last stronghold in the Arctic is losing its stability.

"It's not a surprise" that this is happening, Tesar told Salon. "It's an unfortunate reality." Another reality, he added, is that there's still a lot we don't know about exactly how that change will manifest. "What we do know is that there's a high degree of uncertainty, among people who use the ice, about its stability," Tesar said. "Every time you talk to Inuit in that region, they will tell you: 'We're less certain than we used to be about where to go, and when to go there.'"

The Arctic is an extremely dangerous environment even in the best of circumstances, and the circumstances throughout the region haven't been ideal for a long time now. Fellow explorer George Divoky, who has spent the past 41 summers studying a colony of Arctic seabirds on Cooper Island, off the northern coast of Alaska, can attest to that. For 28 years, he'd rarely even bother to unpack the shotgun he brought with him to protect against polar bears -- until 2002, when one wandered into his campsite for the very first time. The encounter turned out not to be an anomaly, but rather the beginning of a new era for Divoky: one in which the bears, stranded on land and often starving, are posing a heightened threat to the people in their midst.

Divoky had spent a little less than a week with Cornelissen in Barrow, Alaska, in April 2008. The two got along famously, he recalled. The two shared a love and concern for the Arctic, and a passion for outreach, that was rare even for polar scientists. And like Divoky, Cornelissen and de Roo knew what they were getting into, and didn't take the risks lightly. In fact, it was Cornelissen who once designed trip-wires for Divoky to set up around his camp as an early deterrent against the influx of polar bears. The news of his colleagues' death, Divoky said, shook him on multiple levels: It was not just a personal loss, but also yet another wake-up call to how rapidly things are changing. What got to him, he told Salon, "was this thing that I have been aware of ever since the bears showed up: it’s like, OK, the Arctic is changing, and you have to really be careful now.

"You always have to be careful in the Arctic, but now you don’t even know what you can predict," Divoky continued. "You don’t know how thin the ice might be.”

It's impossible to know what Cornelissen and de Roo were thinking in their final moments, but it's easy to image that they would have wanted their deaths to serve as a warning not just to their fellow explorers, but to all of us who are still not fully attuned to the dramatic reality of climate change -- a message they worked tirelessly to promote.

"They loved being out there. They loved pushing themselves; they loved the physical challenge of it," said Ruth Dawkins, who met both men nine years ago during one of the Ben & Jerry's expeditions, and who wrote about their disappearance for the Guardian. "And then they would come home, and right away they would be getting out and talking to people about it. They never rested."

"I would say that their key message was about the need for collective action on climate change," Dawkins told Salon. Every individual had to work as hard as they could doing their own small part, they would tell their climate ambassadors, but the climate movement, as a whole, would take all kinds of people: researchers, communicators, as well as people like them with the sense of adventure -- and funding -- to access the places that nobody else could.

They served a role, concurred Divoky, that not everyone can appreciate. He was touched, he told Salon, to read so many comments beneath news stories from people who remembered Cornelissen and de Roo, but dismayed to see several asking, "Well, what were they doing up there, anyway?”

“He was doing it to let people know that the Arctic was changing," Divoky said of Cornelissen. "He was going out to try and find that out. If he had just stayed home, who else would be going out there and getting this information and bringing it back to people who would never go out on the ice?”