The Dems they are a-changin': How progressives upended the debate — and forced neoliberals to adapt

Neoliberal stalwarts like Cuomo, Hillary Clinton and Rahm Emanuel are moving left — here's why it's not a fluke 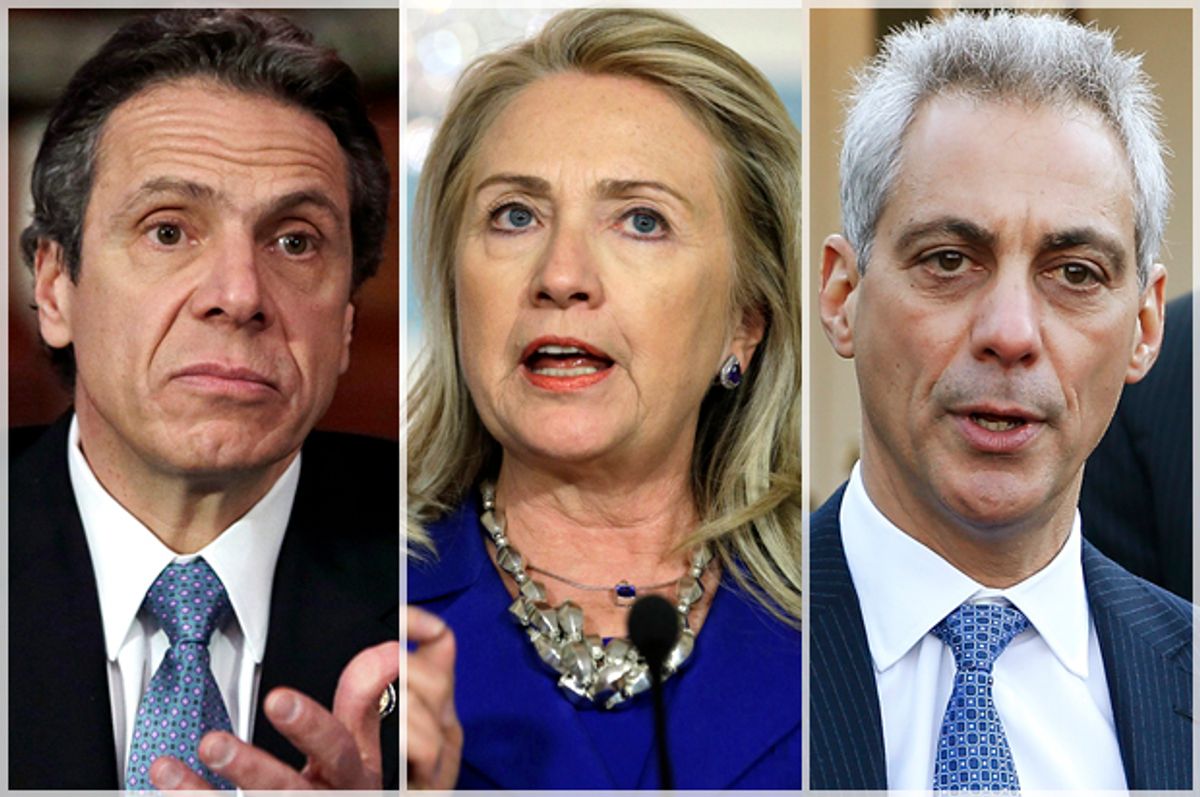 New York Gov. Andrew Cuomo is not a timid man. But like most politicians, he is cautious. He’s taken some risks during his years in Albany — like when he muscled through same-sex marriage, or when he imposed a statewide ban on fracking. Even in these rare moments, though, he was careful and deliberate. He only gambled when he saw no better option. And that’s one of the reasons why his recent endorsement of a wage hike for fast-food workers is a genuinely big deal.

Writing in the New York Times, Cuomo, who usually bills himself as the consummate pro-business Democrat, declared that although he’d already signed a bill to raise the state’s minimum wage to $9 per hour by the end of 2015, the fast-food industry’s wage floor was still not high enough. And because the state legislature wouldn’t cooperate, the governor continued, he was going to direct the state’s labor commissioner to impanel a “Wage Board,” which would ultimately recommend a new fast-food minimum wage. There would be no need for legislative approval.

Unlike his moves on marriage equality and fracking, Cuomo’s joining the growing movement to raise service industry wages came rather out of the blue. But when you situate the notoriously plutocrat-friendly governor’s announcement in the larger context of what’s happening within the Democratic Party right now, it doesn’t just make more sense — it also becomes quite telling. If even Andrew Cuomo has decided that spurning multinational corporations like McDonald’s by supporting the “Fight for $15” is in his self-interest, then the balance of power among Democrats has truly shifted in favor of the party’s activist, union base.

Of course, this is hardly to say the Democratic Party is now the social democratic organization of lefties’ dreams. The minimum wage for fast-food workers is just one issue, and in terms of threatening the party’s wealthiest supporters, it’s relatively harmless (political donations from the fast-food industry overwhelmingly benefit Republicans). But Cuomo’s op-ed for the Times, while significant, isn’t the most important sign that the Democratic base is steering the party in a more left-wing direction. In fact, it’s not even the first or the most conspicuous; but those designations belong to Democrats whose respective names carry at least as much weight.

A political shift on this order is always a long time coming, so picking a start date is inevitably somewhat arbitrary. But if I had to point to one big, specific moment when it started looking like party elites would have to veer left to stay in the base’s favor, I’d go with Chicago Mayor Rahm Emanuel’s surprisingly difficult reelection from earlier this year. As I wrote at the time, one of the main reasons why Emanuel had to fight off a left-wing primary challenger was because Chicago Democrats, especially African- and Latino-Americans, were angry over a first-term record they saw as too conservative on economics and education. Some even took to calling him “Mayor 1 Percent.”

After running an apologetic run-off campaign — in which the neoliberal Emanuel and his supporters tried to refashion him as a true progressive — the mayor ended up defeating his opponent, Cook County Commissioner Jesús “Chuy” Garcia, with relative ease. But while Garcia, by most accounts, ran a disorganized and borderline incompetent campaign, simply forcing Emanuel into the run-off was itself a major victory. No incumbent Chicago mayor had ever had to do it before, and it was widely seen by expert observers as an “embarrassment” for President Obama’s former chief of staff. In retrospect, Chicago Teachers Union President Karen Lewis’s unfortunate illness may have saved Emanuel’s career in electoral politics.

Chicago was the first sign that a new Democratic Party base — one comprised of more people of color as well as educated and single women — was exerting its influence. But former Secretary of State Hillary Clinton’s nascent presidential campaign has been the most conspicuous. Because while Emanuel’s pivot to the left wasn’t so much about policy as public relations, Clinton’s campaign has thus far been characterized by her assuming new, more liberal policy positions. Despite having been a believer in the “tough on crime” policies of her husband, Clinton endorsed outfitting the nation’s law enforcement with body cameras, and spent her first big policy address calling for mass incarceration’s end.

However, if Clinton’s speech on criminal justice was an encouraging sign for the kind of Democratic base voters who support the #BlackLivesMatter movement, her address on immigration this week was, for reform advocates like the so-called DREAMers, a major success. As Vox’s immigration reporter Dara Lind argued in a post describing Clinton’s speech as “stunningly aggressive,” the onetime first lady not only “told activists exactly what they hoped they'd hear” but delivered an address that was “much better than they expected.” She not only promised to uphold and expand Obama’s recent, controversial executive actions; she also called on Congress to pass a reform bill that featured a “full and equal” path to citizenship.

Again: None of these recent examples are intended to prove that the Democratic Party’s left wing is now calling all the shots. There’s precious little doubt in my mind that Cuomo, Clinton and Emanuel will all take policy positions in the coming years that drive the base voters I’m talking about up the wall — most especially on issues involving Wall Street and financial regulation. Still, it’s becoming increasingly difficult to argue, as some of the more cynical and pessimistic members of the American left have done, that the Democratic Party is the same intransigently neoliberal beast as it was throughout the ’90s and early aughts.

Assuming you can find someone not currently under indictment, go ahead and talk to the folks in Albany and ask them what motivates Governor Cuomo. It ain’t the goodness of his heart.