"The damnation of a canyon": The Glen Canyon dam is mind-blowing -- unless you'd seen the canyon before it was destroyed

Environmentalists dream of the dam's demise, the Colorado flowing freely again. Has that become a possibility? 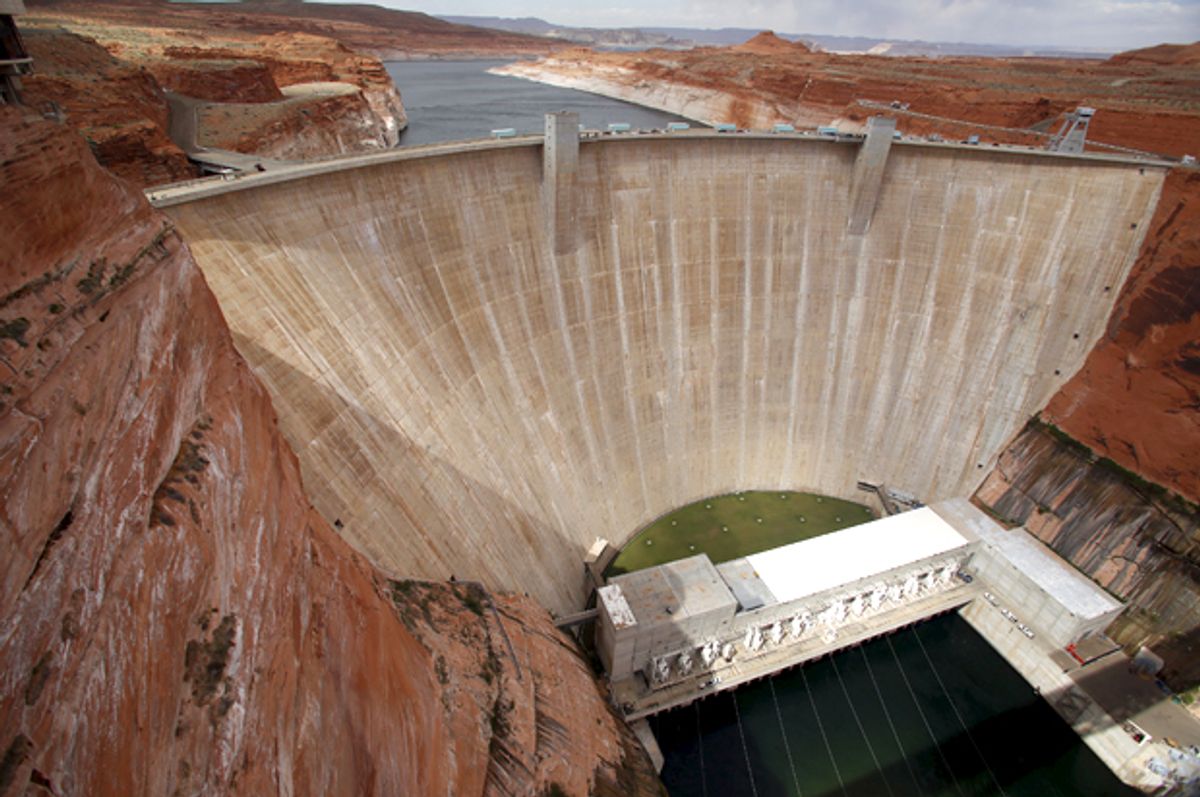 The damnation of a canyon.

That’s what Edward Abbey called it. The damming of Lake Powell and the flooding of the beautiful Glen Canyon.

As I drove across southern Utah, my first indication that the Glen Canyon Dam was near came in the form of three huge smokestacks jutting up into the sky, my first sight of Lake Powell a low glassy haze of blue, wildly out of place in the desert and yet undeniably beautiful. Tropical blue against orange rock.

Just short of the dam, I stopped at Lone Rock, and got to witness firsthand the sort of recreation that Abbey so often grumbled about. A line of 40 campers, trailers and trucks were parked on the edge of the water. Jet skis patrolled the lake, shooting up their rooster tails of spray while their land-bound twins, the ATVs, whined and snarled up in the dunes. The machines seemed to be competing to see who was louder and you got the feeling the owners liked it that way. A hundred feet out in the water stood the great, once-proud monolithic rock that gave the area its name.

The water-skiers circled the rock, and about halfway up the rock’s side you could see the famous bathtub ring. The water level had dropped over the last decade, but left behind evidence of its high-water mark from years before in the form of a stain created by the minerals deposited on the rock and on the rock walls all around Lake Powell. On other parts of the lake there were boat ramps that no longer reached the water. Evaporation is a huge problem here with millions of gallons going, not down the river or into the hydroelectric pumps, but up into the air. Silt is an even bigger problem. Fill a tub with dirt in the bottom and soon the mud will rise, or appear to as the water sinks into it. For decades silt has filled the reservoir from below, and it is in the process of gradually changing this into a lake of mud and muck.

I could feel my own outrage building, as if by reflex. Say the words “the Glen Canyon Dam” and the environmental team all nod their heads and shake their fists. They have been properly schooled and know that it's evil, a great canyon-killing villain. I have been schooled too. Part of that schooling was thanks to Marc Reisner’s "Cadillac Desert," a brilliant expose of the history of dams in the West that should be required reading for all Westerners during these climate-challenged times.

But when I arrived at the dam my first thoughts weren’t environmental ones. I wondered: What if you didn’t know you were supposed to hate this place?  What if you hadn’t read the right books? To say that you'll be impressed is not enough. "Blown away" works better. First there is the sheer massiveness. The great hulking size combined with a kind of smoothness, an otherworldly elegance. Did graceful aliens make this thing? And then there’s the unreal, mind-spinning height from the top of the dam to the bottom.

I stared down at the Colorado, the same river that Major John Wesley Powell first ran. Its flow was now released periodically from the bottom of the dam, but in Powell’s day it had not been regulated by engineers, but by weather’s whims. In 1869, the major plunged through these canyons into the unknown in wooden boats with nine other men. He had heard rumors that he might encounter falls the size of Niagara, meaning that every time he heard a rumble around the corner he knew it might be sounding his crew’s doom. Powell was that oxymoronic thing, a cautious adventurer, and for most of the trip he forced his crew to portage the rapids. But near the end, as food and other supplies grew short, and after two of the men had mutinied and hiked up to the canyon floor, he became, of necessity, less cautious. The plunges through the Grand Canyon rapids were no fun ride, but even the stolid Powell could occasionally find them exhilarating, especially when they all survived with minimal damage to the boats.

To call the Colorado River the lifeblood of the West is no exaggeration: It is the only truly major river in the mountain West, and seven Western states could not exist in their present fashion without it. What will be interesting, or more likely tragic, in the coming years will be to see if they can exist with a whole lot less of it. When the river was divvied up between the states in 1922 it was based on the optimistic number of 20 million acre-feet (an acre-foot is the amount of water made up by an acre of surface volume at the depth of one foot). What those who did the divvying didn’t know then was that the West was in the midst of one of the wettest centuries in the last thousand years. The optimistic number for total flow that they came up with has not been approached in recent years, and in fact the water supply continues to dwindle. This dwindling is the result of a drought over a decade long, but climate change experts warn that we should not expect the water ever to return to old levels; in fact, they have predicted that the flow will be reduced dramatically, by as much as 35 percent, in years to come. Meanwhile whole cities and mini-societies have grown up around their negotiated share of this particular river, including the 3 million-plus citizens of Phoenix, who, with their watered lawns and golf courses, like to pretend they do not live in the desert. A full fifth of the river’s water is delivered to that city via a 300-mile canal. Then there is the electric hive of Vegas, and the greatest water slurpers of them all, the farmers and residents of California.

Edward Abbey claimed that his favorite Western book was Major Powell’s account of that river trip, "The Exploration of the Colorado River." In the spirit of his hero, Abbey paddled through Glen Canyon in 1959, when construction had already begun but the dam had not yet been erected. He and his friend Ralph Newcomb spent 10 days and traveled 150 miles on the river. At the end of that trip they came upon a sign that announced, “You Are Approaching Glen Canyon Dam Site. All Boats Must Leave River …”

Four years after Abbey’s trip, in 1964, Glen Canyon was drowned with the completion of the dam and the creation of the Lake Powell reservoir, which backed up behind the dam for 190 miles, the water submerging hundreds of stunning side canyons and arches and ecosystems unknown these days except, as Abbey wrote, to scuba divers.  From that day on Abbey’s love for Glen Canyon and his rage against the dam radiated outward through almost all of his work. He wrote:

There was a time when, in my search for essences, I concluded that the canyonland country has no heart. I was wrong. The canyonlands did have a heart, a living heart, and that heart was Glen Canyon and the golden, flowing Colorado River.

He had known this place and loved it and after its drowning he would write about it in fiction and nonfiction, both mourning the canyon in elegiac prose and ranting against the dam in full tirade. Lake Powell, he contended, was not a lake at all, but a fetid bathtub constructed not for the irrigation of nearby towns, but for the money procured from the electricity it produced when the water ran through its turbines. Recreation, the great gift that the reservoir supposedly gave the area, consisted of jet skiing and power boating around a tub of water where biodiversity was all but nonexistent, nothing growing on the “near-perpendicular sandstone bluffs” and no plants able to adapt to the constantly shifting water line. Water level was adjusted for the purposes of electricity, so that the plant life alternately starved or drowned.

Meanwhile what was once below the dam’s impounded waters haunted Abbey. A flowing river, a shoreline teeming with birds -- “Living in grottoes in the canyon walls were swallows, swifts, hawks, wrens and owls” -- and fox, coyote, bobcat, deer, ring-tailed cat. Not to mention the fern-bedecked waterfalls and hidden alcoves and Indian ruins. All drowned.

Abbey especially hated the argument that the new lake was more accessible to everyone, that, for instance, you could now putter your motor boat right up to the famous Rainbow Bridge.

“This argument appeals to the wheelchair ethos of the wealthy, upper-middle-class American slob,” he wrote, believing that if the rock bridge was worth seeing, you could easily earn the view with what had been just a six-mile walk. In fact, the older forms of recreation, walking or paddling down the river for free and eating what you brought, were significantly cheaper and more democratic than the renting of motor boats and hotel rooms.

He often dreamed of a time when the river would run free again, when the lake had finally filled completely with silt and mud, and the dam would become a waterfall. This would briefly “expose a drear and hideous scene: immense mud flats and whole plateaus of sodden garbage strewn with dead trees, sunken boats, the skeletons of long-forgotten, decomposing water-skiers.” But nature would take care of the mess soon enough: The winds and rains would scour the canyon clean and return it to something close to what it had been.

At the time, Abbey’s ideas were extreme, but the funny thing is that over the years they have come to seem less radical. As the years have gone by, Lake Powell has continued to silt up, losing more than 100,000 acre-feet per year at last count, and hydrologists believe — as Abbey did -- that silting will eventually lead to a pool of mud, not water. At a time when Western dams are actually being decommissioned so that rivers can flow, experts are wondering whether it is really viable to have two enormous evaporative and silting reservoirs, Lake Powell and Lake Mead, Powell’s downstream cousin created by the Hoover Dam.

The trends of the last decade have dramatically changed the situation. Rising public water demand, relentless drought, and climate change have significantly reduced the flow of the Colorado River from that of the past century. Scientific studies have predicted that this situation will continue. Lake Powell reservoir, and Lake Mead reservoir downstream, are half empty. Most scientists believe that there will never again be enough water to fill both reservoirs.

Which had led to proposals like the Fill Lake Mead First project, the idea being to keep the downstream reservoir, Mead, full while releasing the upstream Glen Canyon. In other words, for the first time Abbey’s wild fantasies are being considered as serious policy.

And for the first time the dream of what would occur when the dam was removed might come true. Abbey writes of that fantasy at the end of his essay, “The Damnation of a Canyon”:

The inevitable floods will soon remove all that does not belong within the canyons. Fresh green willow, box elder and redbud will appear; and the ancient drowned cottonwoods (noble monuments to themselves) will be replaced by young of their own kind. With the renewal of plant life will come the insects, the birds, the lizards and snakes, the mammals. Within a generation—thirty years—I predict the river and canyons will bear a decent resemblance to their former selves. Within the lifetime of our children Glen Canyon and the living river, heart of the canyonlands, will be restored to us. The wilderness will again belong to God, the people and the wild things that call it home.