This is how the right wing dies: The GOP has rigged the game for the rich, again 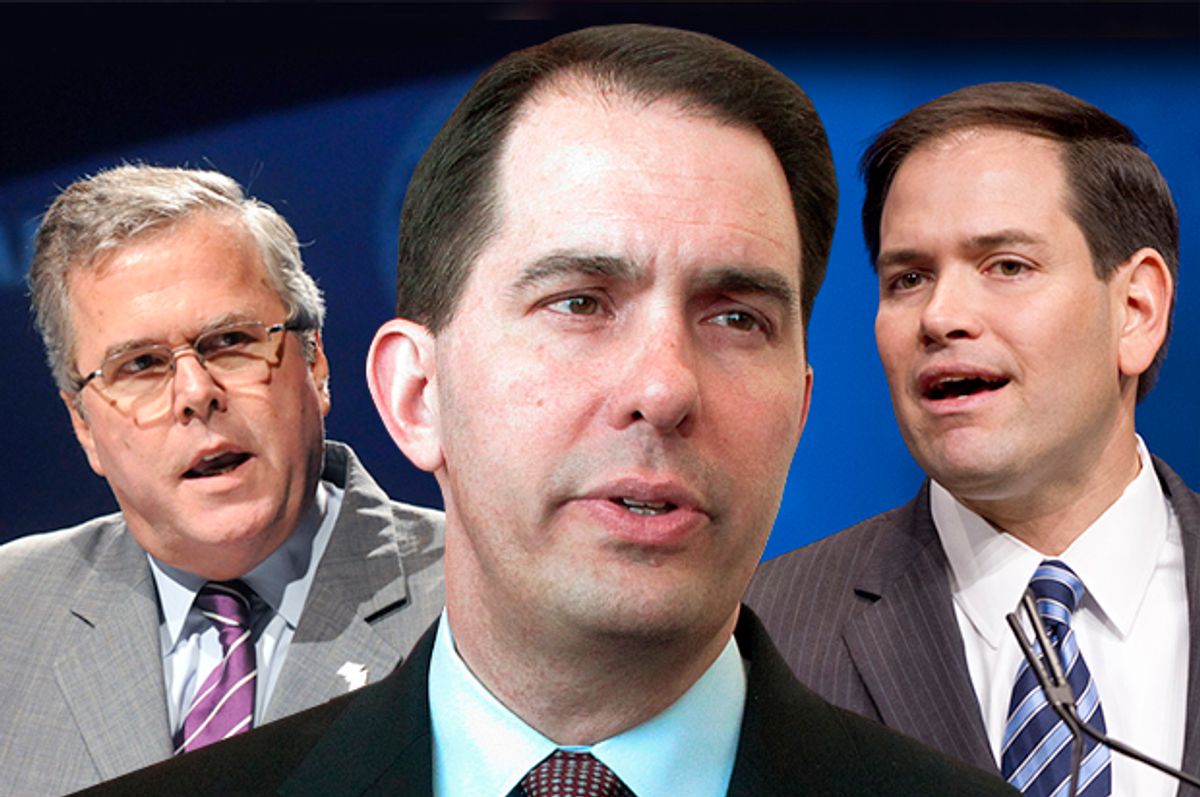 If the past is any guide, a new, progressive Republican Party is taking shape.

We just can’t see it yet. For now, the party still seems glued to the Movement Conservative idea, rooted in a long-standing ideology that business can do little or nothing wrong, that promoting the economic well-being of a few wealthy men will advance American society as a whole. Those few leaders are the “makers,” Paul Ryan explained in 2010; the majority of Americans are “takers.” The more it becomes evident that the “trickle down” theory of wealth has not worked-- that rather than trickling down, wealth has rushed upward since 1980-- the more leading Republicans insist that the problem is not their theory. The problem, they say, is that it has not been adopted fully enough.

One Republican presidential hopeful after another promises to push for the full implementation of Movement Conservative economic ideology. They all back continued corporate tax cuts and the social spending reductions those cuts require. Rick Perry has already touted the “unparalleled prosperity” he brought to Texas and dismisses the fact that that prosperity has mostly gone to the wealthy and benefited from federal help. Darrell Issa, whose personal wealth approaches $450 million, explains that America’s poor are “the envy of the world.”

It looks like Movement Conservative Republicans have a lock on the party and, for the moment, Congress. Americans have soured on supply-side economics, but that hasn’t changed who runs the country. When opponents demand economic fairness, Republicans respond by accusing them of being anti-American “Liberals” or minorities looking for a handout. When rhetoric isn’t enough, Republicans gerrymand districts and manipulate the electorate to stay in power even without a popular majority. When it could have limited the power of the wealthy to control the government, a Republican Supreme Court threw its weight behind the idea that limiting the flow of cash into elections and political debates would infringe on the rights of wealthy individuals.

Is the game so rigged it’s over?

It wasn’t in the 1880s, when the country was in the same position. Just the opposite: It was the reactionary Republican Party’s monopoly on the government that led to the rise of the Progressive Republicans.

The Republican Party formed in the 1850s to reclaim the government from the wealthy slave owners who controlled the country. Members of the fledgling party created national taxation and passed legislation to give every hardworking man land and an education to make it possible for every one to rise—a believe that undergirded the party’s opposition to the spread of slavery. After the Civil War, the Republican Party’s focus on widespread economic growth transformed into protection for the nation’s burgeoning industries. By 1880, Republicans insisted that nurturing business was the key to a healthy economy, for the wealth that industrialists produced would trickle down to workers and farmers. Those who complained that the system was unfair were lazy or improvident; they had “extravagant notions” and wanted the government to take care of them.

Not all Americans agreed. By 1884, even the staunchly Republican Chicago Tribune complained, “Behind every one of half of the portly and well-dressed members of the Senate can be seen the outlines of some corporation interested in getting or preventing legislation.” The Senate, Harper’s Weekly agreed, was “a club of rich men.” It included a man worth a cool $30 million, equivalent to more than $1 billion in the twenty-first century.

Americans disgusted that the government appeared to be up for sale to big business rebelled. In 1884, they elected a Democrat to the White House. Grover Cleveland promised to clean up the system by which rich men bought laws. He promised to return fairness to the government.

When voters put a Democrat into the White House, big business Republicans panicked. Immediately they launched a campaign to convince voters that Republican pro-business policies were the only ones that would keep the economy healthy. When a leading Republican hinted he might be willing to compromise with Democrats on key legislation, party kingmakers bypassed him for the presidential nomination in 1888 and instead gave the nod to the unremarkable Benjamin Harrison, who promised to do as he was told.

The election was remarkably corrupt. Republicans launched a new system of campaign financing that tied businessmen all over the country to the party war chest, warning them that the reelection of Cleveland would destroy the economy. Republicans took the House and Senate in 1888. Harrison lost the popular vote by about 100,000 votes, but his managers swung the Electoral College behind him. When the pious Harrison commented that Providence had given them victory, a key operative grumbled “Providence hadn’t a damn thing to do with it. [A] number of men were compelled to approach the penitentiary to make him President.”

Once in power, Harrison’s men set out to make sure Democrats could never again threaten Republican legislation. They bought a leading newspaper, Frank Leslie’s Illustrated, and installed the president’s son as editor, using the formerly moderate organ as an administration mouthpiece. They admitted six new states to the Union in a year to game the electoral system. North Dakota, South Dakota, Washington, Montana, Wyoming, and Idaho each brought the Republicans two Senate seats, as well as extra votes in the Electoral College. Republicans also tried to guarantee that party officials could oversee all elections in contested districts, although this measure raised such hackles even within the party that it didn’t pass. Nonetheless, Harrison’s men were convinced they had swung the government their way for the foreseeable future.

They were wrong. While they had made it hard for Democrats to press their policies successfully, Old Guard Republicans had created the space for a rebellion within their own party. Younger men looked at the inequality around them and insisted that this was not the America promised in the Declaration of Independence. They looked at men, women and children working in sweatshops and on shop floors with little hope of rising, and wondered what had happened to the idea of economic and social mobility. They looked at a political system in which the will of the majority couldn’t override the money of the few. And they began, quietly, to push for reform.

In the crisis year of 1884, when many disgruntled Republicans jumped ship and backed Cleveland, Theodore Roosevelt, Henry Cabot Lodge, Robert “Fighting Bob” La Follette and Albert Beveridge stayed in the party. From within, they began to advocate the end of reactionary support for big business against the rest of the nation. They recalled the vision of Abraham Lincoln and insisted that America was not a zero-sum game in which rich and poor fought over limited resources. If the government regulated the abuses of the industrial system, promoted education, and kept the economic playing field level, it would create a prospering society in which every individual could rise. Restoring fairness to America would restore American greatness.

In 1884, Old Guard Republicans laughed at the young reformers who, they chuckled, applauded “with the tips of their fingers, held immediately in front of their noses.” But they weren’t laughing in 1900, when Lodge and Beveridge were senators, Roosevelt was governor of New York, La Follette was governor of Wisconsin, and the latter two were turning their states into laboratories for government regulation.

The election of a Democrat in 1884 had convinced the younger men that the old party was out of step with modern America. While their elders rode their ideology into caricature, the younger men remade the Republican Party and brought the nation into a new era. Today’s younger Republicans may not be ready to follow in the footsteps of those progressives, but the bigger question is whether they are willing and able.