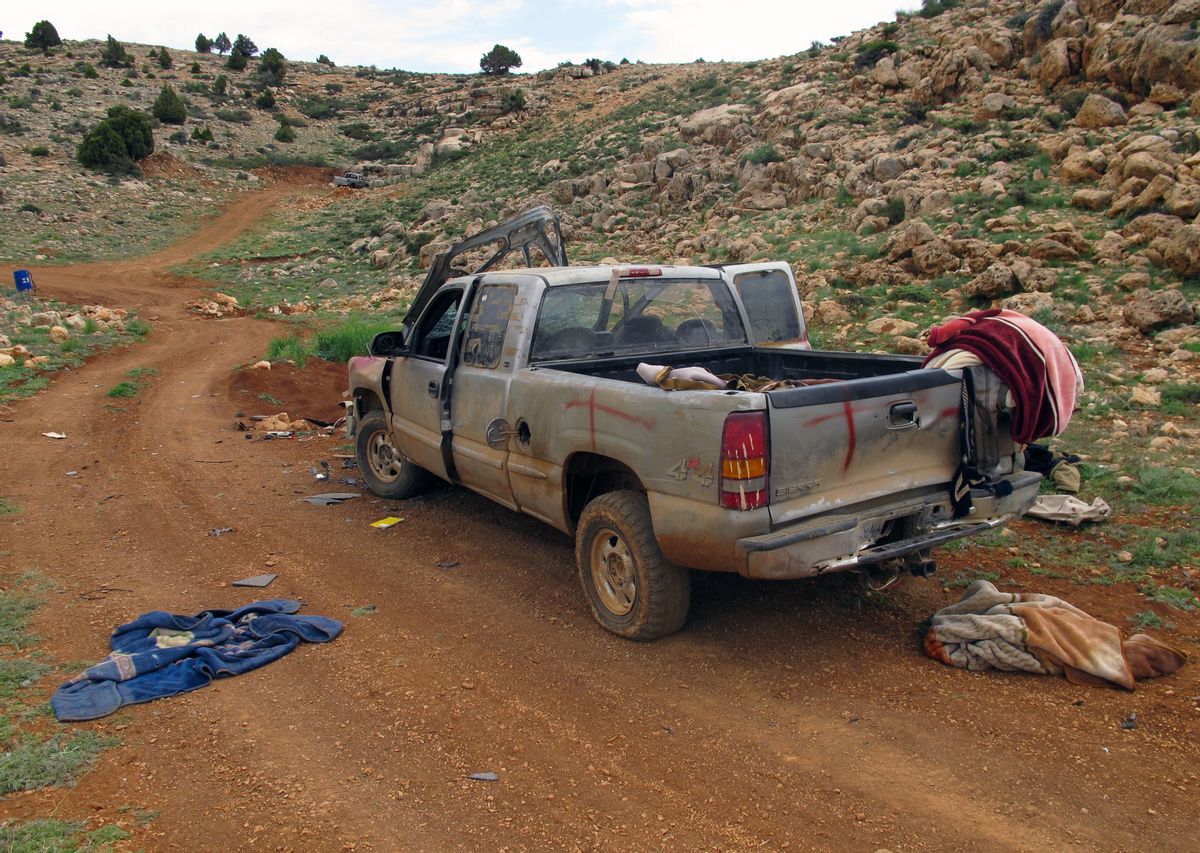 This Saturday, May 9, 2015 photo shows a damaged SUV left behind by members of the Nusra Front, al-Qaida's branch in Syria, in a position captured by Lebanon's Hezbollah fighters in the fields of the Syrian border town of Assal al-Ward. Hezbollah fighters have been spearheading an attack along with President Bashar Assad's troops against Sunni insurgents in Syria's rugged mountainous region of Qalamoun. On Saturday, Hezbollah fighters showed several local journalists and an Associated Press team positions they recently captured in Qalamoun. (AP Photo/Bassem Mroue) (AP)
--

A routine traffic stop leads to the shooting deaths of Officers Benjamin Deen and Liquori Tate — the first Hattiesburg police officers to die in the line of duty in decades.

2. WHAT CASTS WIDE NET ACROSS U.S.

Severe weather hits a huge swath of the country, with a damaging tornado in South Dakota, torrential rains in Texas, a tropical storm in the Carolinas and Colorado snowstorms.

4. WHO FORCES RUNOFF IN POLAND

5. OBAMA TO HOST LEADERS OF GULF NATIONS AT CAMP DAVID

The Arab leaders want commitments from Obama that the United States has their backs in a region under siege from Islamic extremists, Syria convulsed by civil war, Iraq volatile and Yemen in chaos.

Raul Castro says he was so impressed by the pontiff he is considering a return to the Catholic church's fold.

Some of the Nigerian women and girls who had escaped their militant captors were were being discriminated against because of close contact with Boko Haram, a human rights researcher says.

8. WEST POINT NAMES BARRACKS FOR BLACK GRAD WHO WAS SHUNNED

Benjamin O. Davis Jr. entered West Point in 1932 as its only black cadet and spent four years rooming alone, with no one offering their friendship.

Bassem Youssef rocketed to fame after the 2011 Arab Spring revolution as host of a wildly popular Egyptian political satire show.

10. 'DEFLATEGATE' IS JUST LATEST INSTANCE OF GAMESMANSHIP IN PRO SPORTS

Blurring the line between legal and illegal, then figuring out how to get away with it, is as old as keeping score, AP reporters assert.