Marco Rubio and Jeb Bush are 100-percent committed to not learning any lessons from George W. Bush's mistakes 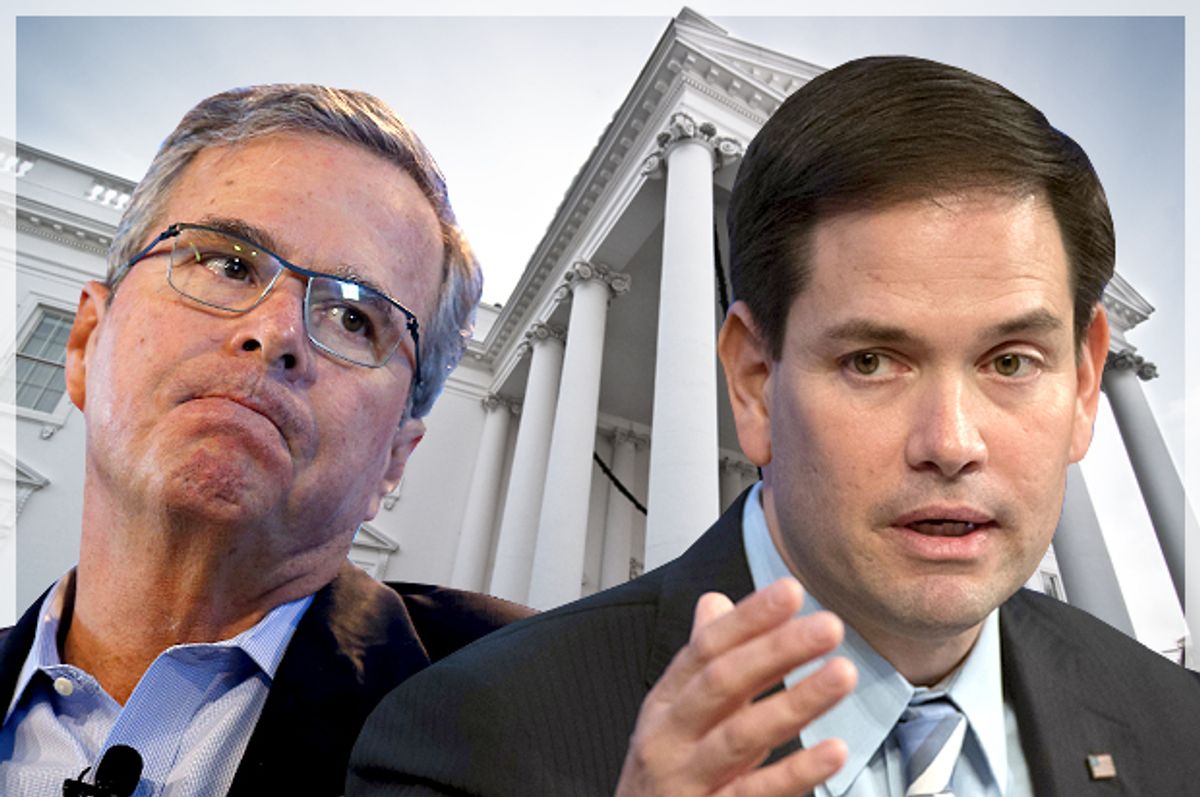 Would-be president Marco Rubio has a message for the terrorists out there who think they can mess with America: he’s seen an action movie, and he can quote it from memory. At this weekend’s South Carolina Freedom Summit – one of the many “freedom summits” littering the GOP 2016 primary landscape – Rubio reduced his foreign policy down to a famous quote from the movie “Taken,” in which professional actor Liam Neeson menacingly informs the fictional bad guys that they will be fake-killed by the character he is portraying. President Marco Rubio’s plan is to translate this classic movie moment into a real-world national security strategy.

Well, if I were a terrorist and I’d seen that movie, I know I’d be scared right now.

The implied message of Rubio’s borrowed bravado is that the current administration’s strategy towards terrorists does not involve tracking them down and eliminating them. That is, of course, nonsense – the president started a brand new, dubiously justified, and still-unauthorized war against the Islamic State, and he just recently apologized for accidentally killing some hostages with drone strikes meant to kill terrorists. But I guess Marco Rubio will do the same things but HARDER and with even less consideration for long-term strategy, and he’ll win because he knows how to "project strength," or whatever.

This is precisely the sort of dick-swinging swagger that conservatives loved (and still love) about George W. Bush. (When W. landed on the aircraft carrier to declare “Mission Accomplished,” G. Gordon Liddy was awestruck over how he could see Bush’s penis through his parachute harness.) The fact said swagger resulted in a decade-long foreign policy disaster that we’ll be struggling to clean up for many long years to come is secondary to the fact that the world knew that Bush was tough and would hit people really hard if they looked at America cross-wise. “Bring ‘em on,” Bush famously declared, channeling his inner action hero and taunting the enemies of America to just try and test our resolve.

Of course, Bush later expressed something approximating regret for uttering that phrase, saying that it offered “a lesson that a president must be mindful of, that the words that you sometimes say -- I speak plainly sometimes, but you've got to be mindful of the consequences of the words.”

So, as W. himself said, there’s a lesson to be learned here: people who aspire to lead the most powerful military in the world should know better than to express their foreign policy views through reductive slogans and stale Hollywood clichés. But today’s conservative movement believes that 95 percent of foreign policy success is intimidating the word with macho posturing. And so foreign policy candidate Marco Rubio demonstrates his “seriousness” by borrowing some intimidating language from a silly action movie.

Speaking of lessons unlearned from the George W. Bush administration, Jeb Bush spoke to Fox News about the war in Iraq his brother started and, in a moment of almost admirable candor, said that he also would have invaded Iraq if he’d been president. “I would have,” Jeb said, “and so would have Hillary Clinton, just to remind everybody. And so would almost everybody that was confronted with the intelligence they got.” It’s not often that you see a politician say outright that they would have enthusiastically been as wrong as many other people were on the biggest foreign policy fiasco of the last ten years. Of course, Jeb was an enthusiastic Iraq war supporter while governor of Florida, and he can’t very well disavow his family’s history of military intervention in Iraq, so he’s sort of limited in what he can say.

The key takeaway here is that Jeb – like most other conservatives – doesn’t view the Iraq war as a failure. The idea behind it was solid, he just has a few issues with its execution. “Once we invaded and took out Saddam Hussain,” he said, “we didn’t focus on security first, and the Iraqis, in this incredibly insecure environment, turned on the United States military because there was no security for themselves and their families.” Jeb hastened to point out that his brother feels this way too, and “so just for the news flash to the world, if they’re trying to find places where there’s big space between me and my brother, this might not be one of those.”

This is all part of the elaborate mythology Iraq war supporters have built up in which the war, despite its false rationale and disastrous execution, was actually the right thing to do (or the only thing to do) and would have been a great success had Barack Obama not ruined everything by withdrawing American troops too soon. They treat the war as less a warning against the swaggering application of U.S. military might and more a blueprint for what not to do the next time we head off on some misbegotten military adventure.