"I clap my hands twice. You feel no fear": The crazy guru who might have cured my fear of flying

I'd tried it all: Therapy, drugs, meditation. What were the chances the guy I'd read about in Us Weekly would help? 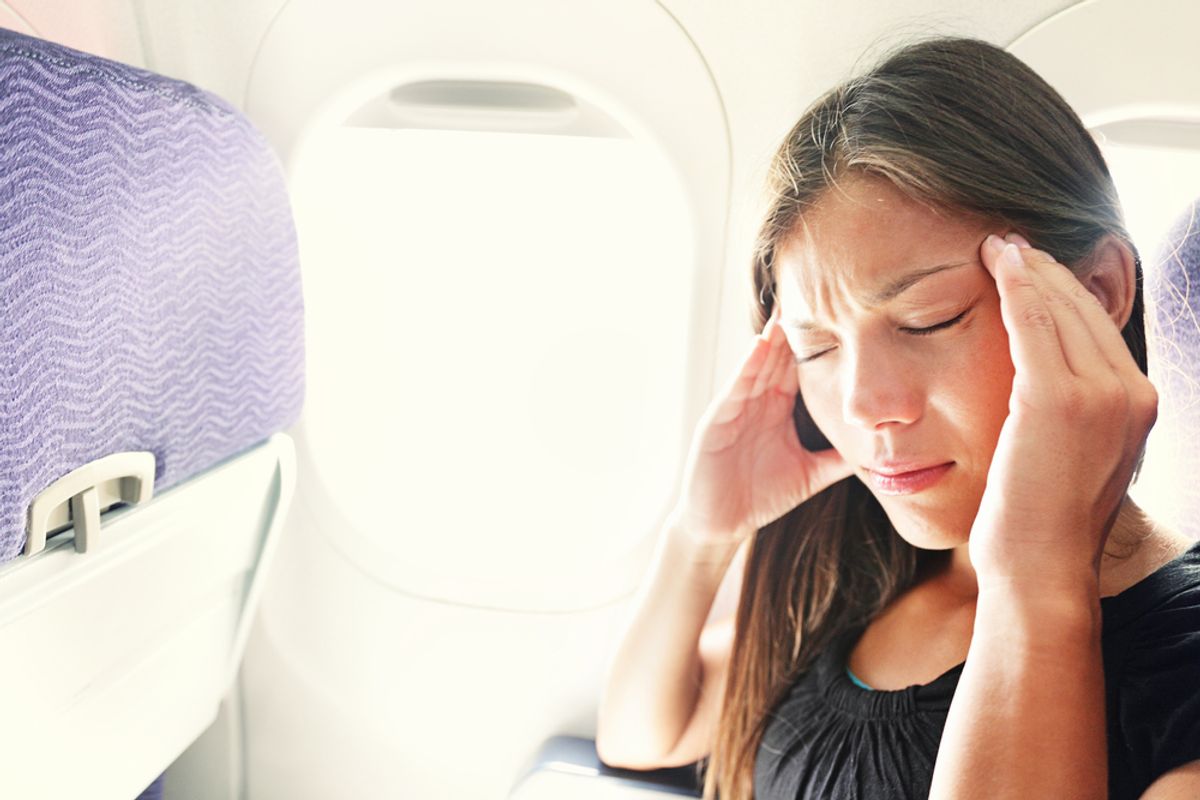 I went to see the Mad Russian because Courtney Cox did. I mean, that wasn't the only reason, but it was a big part of it. Courtney had smoked for years, had gone to the Mad Russian and never smoked again. I knew this because Us Weekly had told me so. Clearly, he was a miracle worker. And he just so happened to live in my city: Brookline, Massachusetts.

Granted, I didn't smoke. But a number of people told me that the Mad Russian cured people of their fear of flying. I desperately wanted to overcome my fear of flying. I was 24 years old, living with three friends. We had little responsibility and lots of time. Now was the time to travel. Unfortunately, I had limited myself to traveling by car because my fear ran so deep. My previous years in grad school in Atlanta with my home base back in Boston had required me to fly. A typical flight consisted of weeks of worrying, sweating and praying that I'd be OK. Once I was on the plane (if I got on it), I sat in silence and did not move or talk for the entire flight. Idle chitchat? No. A drink from the flight attendant? No. Bathroom? No. I was a statue in the sky.

Over the years, I had disembarked on a layover in South Carolina and refused to get on the next plane, requiring me to rent a car and drive to Atlanta. I got off a plane in Atlanta (pre-9/11) and took a series of cars and trains to Boston while my luggage flew home to Boston. I had tried everything: therapy, drugs and meditation. Nothing worked. The Mad Russian would.

Ironically, even though he had been on “60 Minutes” and Us Weekly, he was hard to find. He hadn't yet appeared on the Internet. He did no advertising. I didn't even know his real name. All I knew was his nickname and that he worked in my city. So I began to walk the streets looking for an office with a name that might belong to a Mad Russian.

I don't remember how I actually stumbled upon his office, but I did. I saw a bronze plaque that said "Yefim Shubentsov, "Mad Russian," on the door of an old building. I opened the door to the foyer. Nobody was there. A pile of business cards sat on an oak desk with a calendar and a telephone. I grabbed a card and scurried away.

The next day, I called the phone number I had on the stark business card. "Yefim Shubentsov," it said in the middle of the ecru card. A 617 number at the bottom. That was all. A woman answered gruffly, "Yefim Shubentsov's."

"Yes, I was calling to schedule an appointment with Yefim about my fear of flying?"

"OK. Wednesday. You come with the stop-smokers. Bring check for $65."

"No? No problem. Fear of flying and stop smoking is same thing."

Huh? I didn't understand how a phobia and an addiction could be the same, but I stopped thinking about it. I wanted to believe. I needed to believe.

So, on Wednesday evening, I told my roommates I was going for a walk. I didn't tell them where I was walking to because I didn't want to be dissuaded. I knew if I heard myself describe him out loud, I would realize how ridiculous it sounded. And so I kept quiet and walked to his office.

I climbed the set of stairs to the brick townhouse. The dusty foyer was dimly lit. A number of people milled around the desk. They gave their names and their $65 checks to an elderly woman, who I assume was the woman I talked to on the phone. I waited and then did the same. We did not exchange pleasantries. This was not a place for chitchat.

We all stood fidgeting. I overheard a man say that he had tried everything to stop smoking, and "this was it." He knew the Mad Russian "could help like nothing else."

Then he appeared. A stout man with a shiny, bald head appeared in the doorway. He raised his arms and said in a thick Russian accent, "Come with me."

We followed obediently. We entered a larger room, a brighter room than the dark foyer. The red paint on the walls seemed to glow. Chairs formed a large circle around the utmost perimeter of the room.

We sat. He walked to the large oak door, shut it and locked it.

I wondered if maybe I should've told my roommates where I was going.

He began to yell in a combination of Russian and English, to wave his arms, and to point at people in the circle.

I made out a few English words and understood that he felt very strongly that he was not a hypnotist. He seemed insulted that people might ever think that of him. He did not hypnotize, but he used "bio-energy" to help people. I also gathered that he was an artist and had painted the garish oil paintings on the walls. I didn't understand much more.

He then began the bio-energetic process. "You people. You people need stop. Stop the smoking. What you afraid of? What?"

He then began going around the room, pointing at each person one by one.

He pointed to a middle-aged woman. "You. You in pain?"

He pointed at me.

"Errr," I tried to interrupt, tried to tell him I didn't smoke.

"No. No. No. Do not interrupt. Must stop the smoking," he commanded, pointing at my face.

I got bold. I interrupted. I mean, really, What the fuck? I had just paid $65 to get yelled at to stop smoking, which I had never done? "Hey. Wait. I don't smoke. I never have. I'm afraid of flying."

"Yes. So no more fear. No more fear, you hear? You stay afraid? You end up in insane asylum. Also, you have poor circulation. Move south or you die 10 years early." He then clapped his hands twice next to my face and said, "No. Fear."

I breathed a sigh of relief when the Mad Russian unlocked the door. We nervous people had filled the room with our heated energy. The room had become stifling. The bunch of us filed out the door, shuffling, seemingly stunned by what had occurred.

We were much quieter on the way out than on the way in. A number of people took out packs of cigarettes and threw them into the trash at the bottom of the stoop. That action seemed promising for them but alarming for me. I went back to thinking if he knew what he was talking about, I would die young.

I ran up the steps to our third floor apartment and flung the door open to find my roommates, just where I needed them to be, lying on the couches reading.

"Oh my God, you guys. I just went to this Mad Russian guy who is supposed to be some sort of guru. He helped Courtney Cox quit smoking, but I went for my fear of flying. But I was with all of these people who were trying to stop smoking, and he kept yelling at us, and it was crazy hot, and then he told me I would die young if I didn't move and that I would be in an insane asylum if I didn't stop being afraid!"

I slumped on the couch with my face in my hands. "Seriously. I'm going to be in an insane asylum." Seeing a sliver of humor, I raised my head, "Will you visit me?"

"Of course! I mean, you won't be in one, but if you were, we'd be the first people there."

I had planned a trip back to Atlanta to visit my grad school friends. I had bought the ticket weeks before, hoping that purchasing the ticket was both a commitment and some kind of magic agreement with myself that I'd be OK with the whole flying thing.

I was my usual insomniac self the night before my flight. I lay in bed, picturing oxygen masks dropping from the ceiling of the plane, being trapped on the tarmac for hours, and the passenger next to me dying. I wondered why the Mad Russian's spell wasn't working, but then I convinced myself that I'd fear flying until I was actually on the plane in which case I would be totally at peace.

After a sleepless night, I took a cab to the airport. The Mad Russian's assistant had told me to call an hour before my flight to get a "boost" from my previous session with him. I wrestled my way through the crowds of people to find a pay phone. I took out that plain business card with Yefim's name and number. I dialed it. His assistant answered, "Yefim Shubentsov. Office."

I babbled, "I went to a session to stop my fear of flying. You told me to call on the day of my flight to talk to Yefim. What do I do now?"

"Yefim!  Fearful flyer!" she yelled into the background.

I heard another line pick up.

"I clap my hands twice. You feel no fear. Remember? Fear is insane asylum."

Then I heard two claps and he hung up.

They called my plane to board. I walked on stoically, inside a wreck.

I kept to my normal routine: no talking, no moving, no eating or drinking, and never going to the bathroom. It was as if American Airlines was transporting a marble slab.

As we flew through the air, my palms sweated, my heart pounded, and yet my mind felt strangely objective. I watched the clouds out my window, and I thought I am still scared. I am going to be in an insane asylum. I felt a Buddha-like radical acceptance come over me. I was still afraid, but I could handle whatever came my way.

And I would live 10 more years than the Mad Russian had predicted, poor circulation and all, because he had been wrong.

It has been 16 years since I saw the Mad Russian. I do not like flying, but I fly. I do it without making a scene or changing my plans or clinging to strangers. Does that mean he cured me? Or is it just that now I'm too busy taking care of my kids on the plane to worry about myself? Have I just transferred my fear of flying to a fear of flying with kids? Children on a plane do not allow for a lot of introspective thinking, which is a good thing for a worrier like me. Or have I just learned that there are greater things to worry about now that I'm an adult? Have I transferred my fear of flying to other things? Is that his magic? Replacing one fear with another?

Sixteen years is a long time, but I still think of him every winter as the cold descends upon me. I wonder if I am supposed to move to Florida to live a longer life. My hands and feet are always cold. And I think of him each time I board a plane, unsettled but not panicked, and wonder if that's the best I can hope for.