Alternately invisible or convenient, "Mad Men" has steadfastly denied its black characters their own internal lives 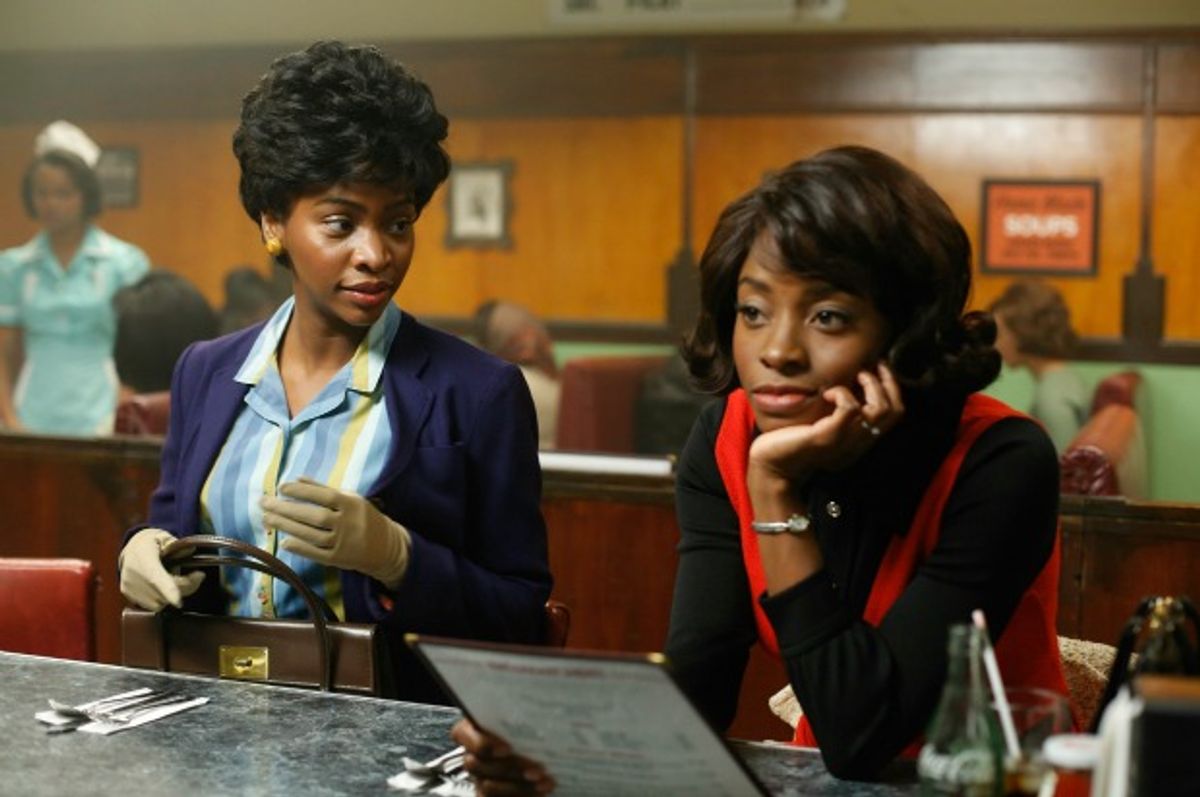 Dawn (Teyonah Parris) and Nikki (Idara Victor), from “Mad Men" season 6 episode “To Have and To Hold" (Jordin Althaus/amc)
--

A few weeks back, on the April 19 episode of "Mad Men," the long-absent Glen Bishop dropped by the Francis-Draper home to bid farewell to Sally and Betty before shipping off to Vietnam. Greeted by the family’s maid, Loretta, Glen introduced himself and asked for her name, and Loretta reacted with pleased surprise, apparently unaccustomed to being regarded with such esteem (read: as an actual person) by the family’s guests.

The interaction was brief and nearly insignificant in the scope of the series’ plotlines, but it reinforced a problematic dynamic that has been present since the show’s beginning: Loretta, a black character with no on-screen interiority, was brought onstage solely to expose something about a white character – in this case, Glen’s enlightenment in extending politeness to a black maid.

The minor scene between Glen and Loretta is just the most recent letdown in a season of similar letdowns. While the second episode of Season 7 positioned Dawn Chambers, one of the show’s only characters of color, to take on a more prominent role in the office, Dawn has barely shown her face in the second half. Shirley, as Roger’s assistant, zipped across the screen in her short, loudly printed dresses, seemingly only to be subjected to smarmy once-overs from her male office mates and, ultimately, to quit, announcing finally that advertising is not a "comfortable" place for "everyone."

With just one episode left in the series, it’s time to call it: As groundbreaking and as gripping as "Mad Men" has been, it has failed on one major front — doing justice to its black characters. Without exception, creator and showrunner Matthew Weiner has denied his black characters their own inner lives and storylines, instead holding them up as lenses through which to reveal the show’s central – white – characters. The dynamic has edged toward exploitation, and it’s especially disappointing given the smart, intricate plotlines Weiner has written for other marginalized characters in a show that prides itself on accuracy.

The racial politics of "Mad Men" have been scrutinized since the show premiered on AMC in 2007, initially for the show’s tendency to exclude black characters almost altogether. The Root was even compelled to launch a Mad Men Black-People Counter throughout Season 4 (aside from the Drapers’ maid Carla, who reappeared on the show’s edges, characters “counted” included such distinguished roles as “An elevator operator in the last scene” and “The man who mugs Roger and Joan on a New York Street”). When Weiner argued that the absence of black characters in the world of "Mad Men" only reflects reality in advertising,  Xavier Ruffin took issue, responding with a satirical online series "Mad Black Men."

But even if, as Weiner says and as Tanner Colby wrote compellingly for Slate, the show’s depiction of race relations at Sterling Cooper Draper Pryce mirrors the firm’s hypothetical reality, the show’s issues run deeper than underrepresentation. More black characters were written into the show as the series progressed, but all of them were used rather than known. Under the guise of staying true to a 1960s New York that marginalized black people, Weiner has instead marginalized his own black characters.

From Season 1, the Drapers’ maid Carla was used to embody the pivotal role that black “help” played in the lives of wealthy white housewives and — especially — the lives of their children. In Season 4, she was fired abruptly — used one final, heartbreaking time to shed light on just how self-absorbed and erratic Betty had become. In Season 2, Paul Kinsey’s black activist girlfriend, Sheila, was used to reinforce what we knew about Kinsey (that he’s a self-righteous douchebag, smugly “open minded”), and to betray Joan, who makes jealousy-fueled racialized remarks, as pettily closed-minded.

In Season 5, black secretaries began trickling into the offices — Dawn, then Phyllis, then Shirley — each used to demonstrate the slow pace of integration and positioned as props to which the white characters could react, placing the white characters along a spectrum of race-consciousness. In Season 6, the assassination of Martin Luther King Jr. set off a fascinating critique of white privilege and of the white characters’ ineptitude. We see the white characters try to parlay the occasion of King’s death into personal and professional advantage, and we hear their fears about how King’s death will affect their commutes and property value and prime-time TV viewing. When Dawn and Phyllis appear, it’s to serve as sounding boards for the cluelessness of their superiors. (Don offers Dawn the day off, failing to understand that she wants to work, that she’s trying to normalize her life, and Joan offers Dawn a comically awkward, tone-deaf hug.)

And let’s talk some more about Dawn.

As the first black hire at Sterling Cooper Draper Pryce, Dawn seemed for a while like she might become the first black character to get the fullness she deserved, but she ultimately remained sidelined, used over and over to lend more dimensions to the white characters rather than to demonstrate her own multi-dimensionality.

In Season 5, Dawn took one of her rare trips outside the office walls to crash at Peggy’s apartment, but when Peggy betrayed momentary discomfort over leaving Dawn alone with her purse, Dawn was used as a prism reflecting Peggy’s struggles with her own prejudices. Season 6 again freed Dawn from the office and even allowed her a conversation with another black character — her friend Nikki — at a diner, but the conversation remained tethered to Dawn’s professional life, using Dawn as a mouthpiece for the challenges of black womanhood on Madison Avenue. Even in a Season 7 episode in which Dawn and Shirley “stole the show” (as Neil Drumming wrote for Salon) the secretaries were used together to poke fun at their colleagues for failing to see their differences. Later in the episode, when Dawn receives a surprising promotion, the situation is once again constructed to shade the white characters rather than to show us anything about Dawn.

For all of Dawn’s potential — and even with the implied depths that actor Teyonah Parris lends to her — we never really get to know Dawn.

To be fair, all characters are used by their creators to build a story, and all good characters work to reveal one another. "Mad Men" continues to use the experiences of its women to expose the grossness of its men. Salvatore Romano was used to expose the precarious professional and personal lives of closeted gay men. Michael Ginsberg, along with earlier Jewish characters, was used to demonstrate shifting attitudes toward Jewish people in the workplace. But their characters didn’t stop there. The women of "Mad Men" are some of the most complicated, memorable women to ever walk across our television screens. Salvatore Romano, while ushered off-screen too soon, led several lines of dramatic tension both in and out of the workplace. Michael Ginsberg negotiated a complex relationship with his father, a haphazard dating life and, eventually, mental health issues.

In short, for the show's women, its gay characters and its Jewish characters, their minority status doesn’t define their edges — their nuances and entanglements reach into the crevices of their humanity — and Weiner’s care in handling these characters makes his treatment of black characters all the more shameful.

Last year, Weiner talked with Time about the early absence of black characters on his show, and their increasing presence as the agency began to integrate: “I’ve tried to make a statement out of it from the very beginning, the absence of people of color in their world and the way that civil rights come into their life,” Weiner said. He went on to say, “...there was a kind of confusion about whether it was some oversight, but I’m not telling the story of the civil rights movement. I’m telling a story of the mass culture and their experience of the civil rights movement.”

The thing is, highlighting the invisibility of black Americans on 1960s Madison Avenue is not best achieved through making those characters invisible to the audience as well. How much more layered would Dawn and Shirley’s jokes about their interchangeability have felt if the characters were drawn more clearly for the viewers — beyond the stark difference in their wardrobes?

In a time of national conversation around the significance of black lives, it’s baffling that Weiner would fail to bring even one black character into central focus, especially in a show that allows for an ebb and flow in its revolving cast of significant secondary characters, and especially as he portrayed a period in which black people took on larger and larger roles in the “mass culture” he refers to. There just isn’t a good excuse for failing to let even one such story line evolve beyond its implications for the show’s white world.

It’s admirable that Weiner has been unafraid to shed a harsh light on the racist fumbling of his beloved white characters, resisting any tendency to falsely align them with contemporary sensibilities. "Mad Men" has been brave and engaging and widely embraced as one of the best-ever shows on television. But.  The most impressive achievements of "Mad Men" just don’t let it off the hook for failing to give a single black character the opportunity to live a richly explored life on-screen.