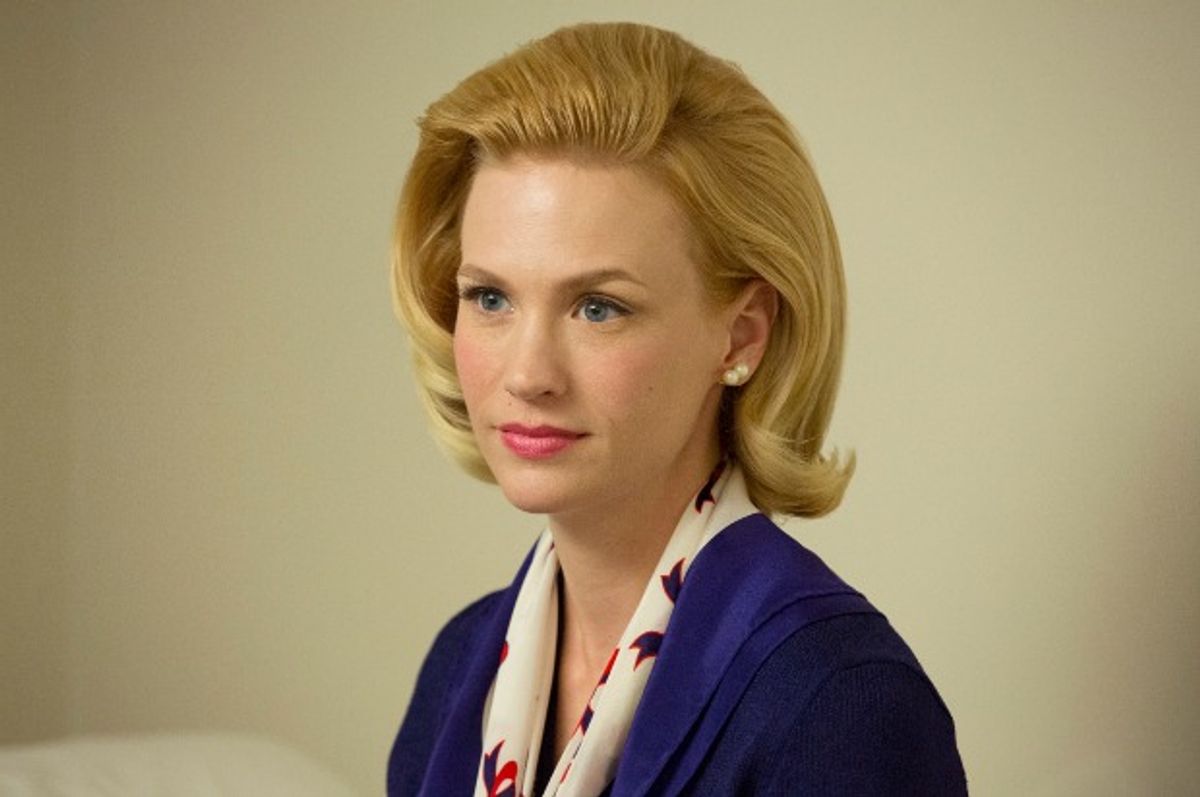 In the second episode of “Mad Men,” the archly titled “Ladies Room,” Betty Draper cannot apply her lipstick because her hands are shaking. Mona Sterling, Roger’s then-wife, who has accompanied Betty on this trip to powder their noses, helps her without condescension. Betty is 28, with two kids at home, meeting her husband’s boss and his boss’s wife for a swanky dinner in Manhattan. She’s nervous, and not just because Mona is almost old enough to be her own mother, while Roger is a comfortable aristocrat at the dinner table. She doesn’t really know her husband, who is avoiding questions about his childhood at the dinner table. She doesn’t really know what his life is like in Manhattan; she’s a creature of the suburbs, taken off the shelf and dusted off for special occasions only. As the audience discovers later in the season, Betty knows, deep down, that Don is cheating on her, which is at least one of the reasons her hands shake when she’s in his world.

The other is that she’s shaken and grieving. As she confides to Mona, her mother died just two months ago today. If Betty’s mom had her around the time that she had Sally, then her mother was in her mid-40s when she passed away.

It appears that Betty will not even make it to 40.

It makes perfect sense. There’s barely a moment Betty’s on-screen where she’s not either immediately post-cigarette or immediately pre- another one. She literally gets out of the doctor’s office and reaches for a cigarette. Betty has smoked cigarettes ever since she was a teenager—probably since she was younger than Sally is now. (Nothing about Sally picking a cigarette out of Betty’s case and smoking it in the car in the season six episode “The Quality of Mercy” seemed to shock Betty; if anything, it amused her. The cigarette was a rite of passage.) Betty didn’t just make smoking looked cool, she made it look statuesque, graceful, done.

It makes perfect sense, too, because her husband used to sell cigarettes for a living—it was, after all, Don Draper, in the very first episode of "Mad Men," who found a way for Lucky Strike to avoid the surgeon general’s report on cigarettes’ link to lung cancer by appealing to America’s collective desire to stay blissfully ignorant as long as possible. Much of the first season of “Mad Men” focused on the decade’s suicidal obsession with cigarettes—Betty smokes in her psychiatrist’s office; Peggy’s gynecologist smokes in the exam room; Roger Sterling smokes even though he’s had a heart attack and nearly died. When Sterling Cooper lost Lucky Strike, it faded from the show’s day-to-day, but the pernicious, poisonous influence of cigarettes is baked into the premise of the show.

And now Betty Draper is dying at the age of 38, just 10 years after her own mother died. She can’t climb up the stairs to her psychology class she’s enrolled in, for her long-awaited master's degree (the logical culmination, perhaps, of her first-season sessions with the psychiatrist). And she’s facing it with an almost unbelievable stoicism—an iciness that both strengthens her resolve to continue living her life as she did before, without trying to lengthen it, and extends to her husband and daughter, whom she won’t even humor with a longer-held hug.

There is more to “The Milk and Honey Route” than Betty’s story, but Betty’s is the one that matters. Don engages with ghosts from his past and remnants of a different life somewhere outside Tulsa, and his aimless wandering is where the title of the episode comes from: “The Milk And Honey Route” is a “humorous” guide to being a hobo, that population of shiftless wanderers that young Dick Whitman so memorably collided with in season one’s “The Hobo Code.” An element of Don’s adventures is infused with the allegorical quality of struggling to kill his demons from the past, so that he can—maybe—move into an uncertain future. But Betty’s story in this episode is entirely about confronting those demons, and then realizing they can’t be conquered; the future isn’t just uncertain or unknown, it’s nonexistent.

For years, “Mad Men” has toyed with the idea of killing off Don Draper. It’s the name of a dead man, worn by a man in hiding from his real identity. Don’s brother killed himself in a dingy Manhattan apartment; Anna Draper died of cancer out in California. The opening sequence of the show offers an image of a man hurtling, calmly, to his doom. Many viewers, including myself, have posited that the finale might offer up Don’s death, as a way to put the show, and the character, to rest in the tomb of the 1960s.

With “The Milk and Honey Route,” “Mad Men” is revealing its endgame: It’s killing off Betty, not Don. And that does make a sad sort of sense: Betty never quite had the wherewithal to break free of her gilded cage. She’s undeniably of her era, and not looking to get past it; Betty Draper literally wouldn’t be able to survive the 1970s.

Unlike Betty’s drama with Sally, Henry and death itself, Don’s adventures in Oklahoma are more purely symbolic in nature. The episode starts with a dream where Don is pulled over for getting away with something for far too long. He’s not like himself—terrified, defensive, uncooperative, instead of smooth-talking and capable. When he wakes up, he’s in a motel in Kansas, dreaming about driving because he’s driving all the time. And yes, he has gotten away with something for far too long, which is being Don Draper, not Dick Whitman. But as he crosses into Oklahoma, his car sputters and dies, and he’s unexpectedly roped into the small-town prejudices and politics that he came from. From the minute he shows up, the townspeople seem out to fleece him—booze, slow mechanics, fundraisers for veterans, and more. And yes, “townspeople” is really an appropriate word to use—this is a sheltered, hive-mind population, one capable both of great kindness and great violence.

Don is identified first as rich and then as a con man—and though the townspeople are right, they’re not correct about what he’s lying about. They accuse him of stealing $500, and beat him with a phone book before stealing his car keys. Don has already cased the town for the other con man—the competition—and strong-arms the kid into giving the money back. Then he gives the car to the kid, settling down on the bench to the side of the two-lane road, waiting for an infrequent bus, carrying a crumpled Sears bag. I don’t really know why Don handed off the car, except for the most basic reason, which is that he wanted to help out a kid that he saw so much of himself in, even if that kid was going to make the exact same mistakes that Dick Whitman started out making on his way to becoming Don Draper. There’s a way that being the con man puts you in opposition to the fickle opinions of the herd, especially when all you want to do is get anywhere (which our young con man would have called “nowhere,” probably).

This may well be the last we see of Pete and Trudy, though I’m hoping we return to their story line in next week’s finale. I couldn’t quite come to terms with their rapid reconciliation, pegged to Learjet, but I did find it interesting that as Don wakes up in and claws his way out of the heartland, starting in Kansas, Pete gets an offer to live in Wichita and decides it’s a ticket to salvation because it’s outside the city.

Regardless, “Mad Men” is ending with a determined focus on family—on Pete and Trudy, on Betty and Sally, and on Don and Sally, too; I suspect Betty’s death will force Don back into his old life, albeit with some significant changes. What I am noticing is that almost everything the show is playing with in “The Milk and Honey Route” is thematic material from the first season; this is a story looping back around on itself to make a point, with elegant symmetry. It’s even reviving the Hitchcock references in the opening credits with that shot of Don by the bus stop. We’re not in Kansas anymore, but we’re going to be in Kansas again; Toto, it’s a long story, and hard to explain.