My conflicted relationship with female beauty

Women in my family were glamorous, and I spent nearly two decades at war with my body for falling short 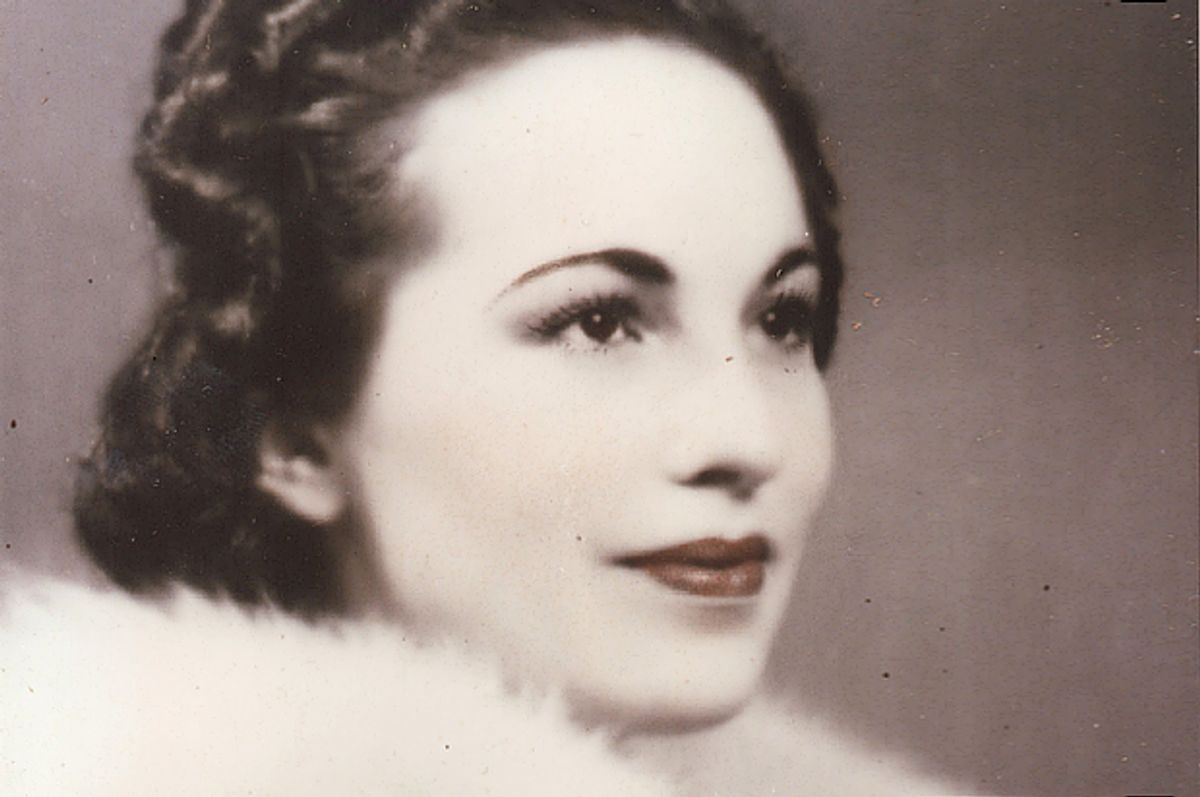 A photo of the author's grandmother.
--

I got my first manicure when I was 11. This was at the local beauty school in Portland, Maine. There was nothing posh about the room’s fluorescent lights and chipped Formica, or the redneck beauty student’s aquamarine eyeliner and feathered hair. But when she took my right hand to initiate me into the ways of womanhood, maneuvering it gently into the bowl of sudsy water because I’d broken my wrist riding my bike, I could sense the ritual power of the moment. This was something sophisticated women did to make themselves glamorous and attractive. I was into the polished nails – my fashion idols were “Pretty in Pink”-era Molly Ringwald and “Desperately Seeking Susan”-era Madonna, but I doubted there was anything the nail enamel could do to polish me.

All I needed to feel insecure about my launch into the feminine arts was to look next to me, where bright red nail polish was being applied to one of the talons extended by my grandmother, Betty. I was not permitted to call her Grammy or even Grandmother because it would have aged her unthinkably. And, besides, there was nothing matronly – or grand-matronly – about this onetime model, hat-check girl and mobster’s girlfriend, who’d only given up her ritzy dreams when her alcoholism had landed her in prison for child endangerment, and she’d needed to get into AA and learn practical nursing to regain custody of my dad. Even so, she still looked the part of the good-time girl she’d once been.

Every summer, when she visited me from Manhattan, where the midtown Macy’s was her temple, and Estee Lauder was her high priestess, she cast a critical eye upon me. While she sported a well-coiffed cupcake of artificially reddish brown hair and vivid red lips, my naturally russet hair was a frizzy mane and my pale skin was mottled with dark reddish brown freckles, which gave me a definite country girl vibe, no matter how many fancy dresses she sent me from Macy’s and Lord & Taylor. I adored the dresses themselves, and their connection to the big city life I craved, but I could tell simply donning them wasn’t enough.

At least at that age, I was somewhat shielded by the protection of childhood innocence. My mom was raising me, with my stepdad, in the woods of midcoast Maine, where I was encouraged to read books and play outside, and my mom sewed many of my clothes. While she appreciated my grandmother’s generosity, my mom balked at her attempts to age me prematurely, which I was already intent on doing myself, and tried to encourage me to be – and look – the part of the young girl I was for as long as possible.

There was just one problem here. It was easy for my mom to push back against my grandmother’s expectations because she was gorgeous herself, with long honey brown hair and the kind of naturally pretty face very much in vogue at the time, thanks to the likes of Mia Farrow, Joni Mitchell and Sissy Spacek. And so, I felt poised to follow in neither woman’s footsteps.

On later visits with my grandmother, as I grew curvy and nearly to my adult height of 5-foot-10, and neither my freckles nor my hair showed any sign of being tamed, Betty was even more overt in her criticism of my looks.

“You’re as big as an ox,” she told me at age 12 while we ate hamburgers and fries. Having been on a diet her whole life, she now gratefully permitted herself all of the fatty food she could gnaw her way through. I, on the other hand, was supposed to know better. I was in the first bloom of my blossom and needed to train its growth accordingly, in order to maximize the impression I made.

“You should comb your hair,” Betty said, on this visit and many others.

While Betty was beyond turning heads anymore, she still made an effort, maintaining that certain edgy, almost tacky elegance that New York City women have always done so well. My mom definitely got attention from men, even though she was shy, and it was clearly unwanted and made her uncomfortable. I had seen what female beauty could do, and so I idealized its power. And I even tried to live by its codes for a time. I made earnest, foolhardy attempts at sunbathing – resulting in sunburns, or simply more freckles – and strove to curl my hair into the high wall of bangs popular with my peers at the time, mostly just making it more frizzy. But always, I felt deeply embarrassed for even trying, when it was clear how far I was falling short of the mark.

When I was 13, I found freedom. Sinead O’Connor stormed the music scene, and my heart, with her brash lyrics and bald head. I got into punk rock bands like Crass, with their strident feminist lyrics and aggressively androgynous female members. And when I attended my first Cure concert that autumn, I felt instantly soothed by how the heavy, theatrical makeup worn by those around me made it clear they didn't want to be pretty. Instead, they were creating their own aesthetic code that elevated ugliness, deformity and pain to an aesthetic ideal.

The day after that concert, I put on my own heavy black eyeliner and berry red lips. Instantly, I felt protected, like I had taken myself out of the running to be considered attractive. My defiant mask made me feel safe to be me, the hugest relief. Never mind that I instantly drew more attention to myself at school than I ever had before – being called a Satan worshipper and a dyke, and accused of having HIV. I felt like my appearance told onlookers to piss off before they’d even had the chance to size me up and assess my looks, and I loved this defiant stance.

My family fought back. My stepfather told me I was pretty underneath all that junk, so he couldn’t understand why I would want to look like that. My mom hid my black eyeliner when she found it in the car. But then, realizing I wasn’t just going through a brief phase, she supported me in my Goth look, even sewing me a black velvet miniskirt and red velvet dress.

My grandmother was not giving up so easily. Although I had tamed my daily makeup by the time we resumed our yearly visits in my early 20s, I still wore heavy, poorly applied face powder over my freckles and bad skin. She brazenly took me around to various cosmetic counters at her Macy’s, begging the women to do something with me. The pitying look of one Clarins clerk will be forever etched into my soul. See, here was proof: I was a disappointment to the familial standard, and so it was better I’d rejected it years earlier in favor of punk.

Whether made up to shock or not, I was at war with my body for nearly two decades beginning when I was 13. I smoked and drank heavily – as much as a pack and a half a day, and as much as I could get – starved myself, took whatever harsh prescriptions I was given for my skin, lived on coffee and gin, refused to leave the house without at least heavy face powder, avoided being photographed whenever possible, all in the name of being a punk, a writer, an artist, all to hide my pain at desiring myself to be perfect and always falling short.

All of this combined to make me a bit of a late bloomer. My writing life was going well, but everything else was stunted, even if I wouldn’t admit I might want it any other way. And then, I fell in love. With Los Angeles -- that bastion of dewy gorgeousness – and moved there when I was 30, having previously lived in cities not exactly known for their beauty sense: Portland, Oregon and Boston.

The women in my new city were like a hybrid between my mother and my grandmother – at once naturally luminous and perfectly polished with a look-at-me poise. Rather than sending me into a tailspin of insecurity, it set me free. There was no chance of being the skinniest, prettiest, most well put together woman in any room. And so I didn’t even worry about it. I also noticed something interesting about L.A. women. When they wanted to be admired, they got their blowout, put on sexy jeans or a whimsical dress and some great shoes, and went for it fully. The rest of the time, they operated as if behind an invisible shield, waiting in line at the coffee shop or juice bar, largely makeup free in their Juicy sweats or yoga clothes, as if to say: “This is my time, the time where I take care of myself and my body, and none of this is for public viewing right now.” This ownership of their appearance and space in the world – what I’d always wanted for myself, even though I’d acted out my desire in a counterintuitive way – intrigued me, and I looked closer. Many of these women were stunning because they glowed, rather than any specific physical attributes. Their eyes were bright, their skin clear and translucent, their bodies fit and limber, whatever their size.

I wanted to look like them – healthy and comfortable in their own skin. I finally admitted I cared. Not about being attractive, so much as about feeling good in my body, or at least not treating my body like I was a foreign invader come to dominate and pillage. And that, in order to feel better, I had to take better care of myself, maybe even dare to be a little softer and more vulnerable in the way I interacted with myself and the world. I put down many of the shields behind which I'd hid for years -- cigarettes, sarcasm, heavy face makeup to hide my freckles -- and started being in my body a bit more. I was embarrassed by much of this transformation, especially in a city where the quest for eternal youth and beauty could veer so far toward cliché.

At the same time, I realized that by denying myself real opportunities to feel and look good -- like yoga, facials, daily rituals designed to maintain physical and emotional health -- I was only giving the cult of beauty all the more power by alienating myself from my own body as I’d done for decades. When I stopped being at war with myself (at least quite so much), I looked better -- I could feel it -- and I had a better experience of being alive in the world.

Even on my most polished day, I’m far less grand than Betty would have wanted for me, but I think she would approve of how I’ve gotten myself into a version of the life she always wanted as her own: independent and at home in an international city, mostly at ease among the symbols of beauty by which we measure glamour and success. Even if, on most days, she would still think I need to comb my hair.